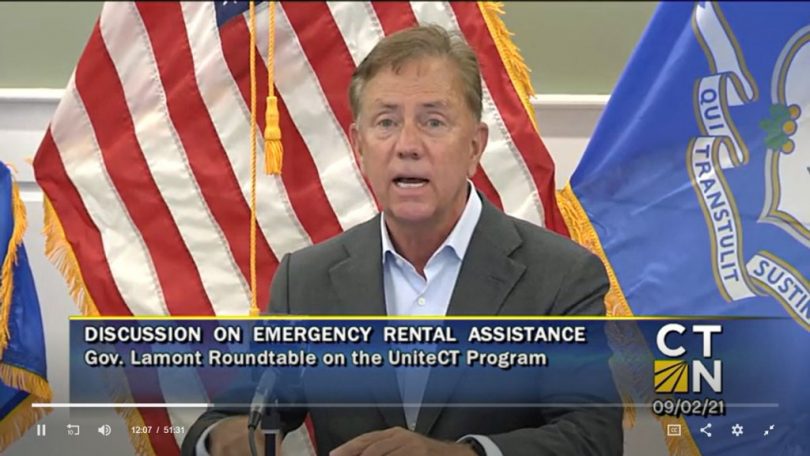 John Souza, president of the Connecticut Coalition of Property Owners, said many small landlords are glad they began working with the UniteCT rental assistance program.

Gov. Ned Lamont signaled Thursday he would look to extend at least one of his emergency orders beyond its Sept. 30 expiration date in an effort to preserve a policy diverting eviction cases to a rental assistance program.

Lamont was among a group of state and federal officials seeking to raise awareness of the UniteCT rental assistance program during a morning roundtable discussion in Middletown.

Now that the Supreme Court has ruled against President Joe Biden’s extension of a national eviction moratorium, UniteCT serves as a temporary backstop against an expected wave of evictions. In a June emergency order, the governor required landlords to apply for the federal benefits before beginning an eviction process. But that requirement is tied to emergency declarations scheduled to expire at the end of the month.

“The plan is to work with the legislature and get it extended because the pandemic’s not over and the need has not gone away and I think right now, the executive order is working pretty well,” Lamont told reporters. “I think we work very closely with landlords, very closely with judicial, very closely with legal aid but I think Sept. 30 is too short.”

The program and the diversionary requirement found praise from the group gathered in Middletown. Wally Adeyemo, deputy secretary of the U.S. Department of Treasury said the state’s administration of federal funds through the UniteCT program would serve as a model for other states.

“I’ll walk away from today realizing that here in Connecticut you have found a way to use the flexibility provided by the federal government in a way that ensures that people get the resources they need,” Adeyemo said.

Dawn Parker, the director of the program, said UniteCT is in the process of paying out about $112 million to keep tenants behind on their rent in their homes. Another $58 million in requests are under review. The program has helped more than 9,300 tenants and 3,700 landlords, she said.

Parker said the governor’s emergency order has had its desired effect: Lamont announced the change at the end of June and applications for assistance increased in July and August.

Even a representative for Connecticut landlords, who at times during the pandemic has been critical of the state’s previous extension of its eviction moratorium, was positive Thursday.

“It was a leap of faith for small landlords to accept not starting an eviction and work with the program but I think at this point many are glad that they did,” John Souza, president of the Connecticut Coalition of Property Owners, said. “Many are glad to be able to pay their bills again.”

Past extensions of the governor’s emergency orders have proven controversial among some residents and Republican lawmakers. In July, the last time the legislature voted to continue the emergency declarations, hundreds of opponents rallied at the state Capitol building.

However, the state’s COVID-19 metrics have worsened significantly in the weeks since then as the more-transmissible delta variant has spread throughout the state. On July 14, the day lawmakers approved the extension, only 30 people in Connecticut were hospitalized with the virus. As of Thursday, there were 357.

In a Thursday interview, House Speaker Matt Ritter called a continuation of the requirement that eviction cases apply for rental assistance a “no-brainer.” The state should try to use the federal money it’s been given, he said. But it may not require an extension of the emergency order. Ritter said the legislature could pass a limited special act to accomplish the same thing.

So far, Lamont has not reached out to legislative leaders with a request to extend the declarations. But given Connecticut’s current COVID trends, Ritter said a continuation may be appropriate, depending on which orders the governor is looking to extend.

Senate President Martin Looney said Thursday he would be inclined to approve an extension if Lamont asks for one.

“We still have a COVID crisis,” Looney said. “The Republicans who were objecting to the last extension we did in mid-July – they used words like ‘The pandemic is over. The crisis has waned, it’s past us.’ Several days later the new spike started. They should be reminded how short-sighted their comments were.”

House Minority Leader Vincent Candelora rejected the notion that objections to Lamont’s ongoing emergency authority were short-sighted. Such declarations should be short in duration to deal with immediate problems, he said. Candelora pointed to the governor’s emergency declaration last month ahead of Tropical Storm Henri, which Lamont used to close highways until the weather subsided.