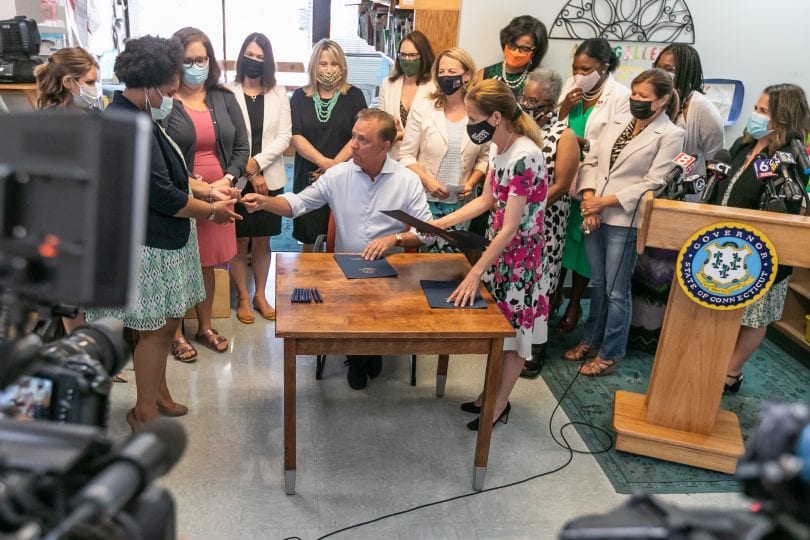 Legislation signed by Gov. Ned Lamont Tuesday is being touted as a way to level the playing field in state government in several ways, including allowing the use of campaign funds for child care costs, and encouraging gender and racial diversity on boards and commissions.

Caitlin Clarkson Pereira, a Fairfield mom whose daughter was 3 years old when she was running for state representative in 2018, and reached out to state election regulators to see if she could use campaign funds for child care.

“It became clear very early on that trying to run for office with a child or with children was a really big issue for people,” she said in a story reported by Christine Stuart for NBC Connecticut.

“They said it was a personal expense and one of the things they compared child care to was when a candidate in the past had asked to be reimbursed for new tires on their car,” said Clarkson Pereira, who advocated for the change.

“Currently, the General Assembly is comprised of 33% women elected officials; which is only an additional seven seats over the past 10 years. That pace is unacceptable,” said Rep. Dorinda Borer (D-West Haven), chair of the Connecticut Women’s Bipartisan Caucus.

In addition to allowing campaign funds to be used for child care, Senate Bill 883, “AN ACT CONCERNING THE RECOMMENDATIONS OF THE GOVERNOR’S COUNCIL ON WOMEN AND GIRLS,” focuses on racial and gender diversity on state boards and commissions to build a talent pool and bring additional perspectives to the table.

“Our democracy thrives when it’s reflective of the people,” said Rep. Kate Farrar (D-West Hartford). Diverse representation in leadership and governance not only taps our state’s talent but offers a variety of perspectives that improve our state and future. By signing this bill into law, our state is affirming its commitment to making state government more inclusive.”

The measure was developed in partnership with the Governor’s Council on Women and Girls, and will require regular reporting on the gender and racial composition of state boards and commissions, requires public outreach to encourage the recruiting of a diverse group of applicants, and sets a goal for state boards and commissions to reflect the state’s population composition by 2026.

Farrar thanked Lt. Gov. Susan Bysiewicz, Secretary of State Denise Merrill, Sen. Mae Flexer, Borer, and others who helped move the bill through the legislative process and those who were present at the bill signing Tuesday.