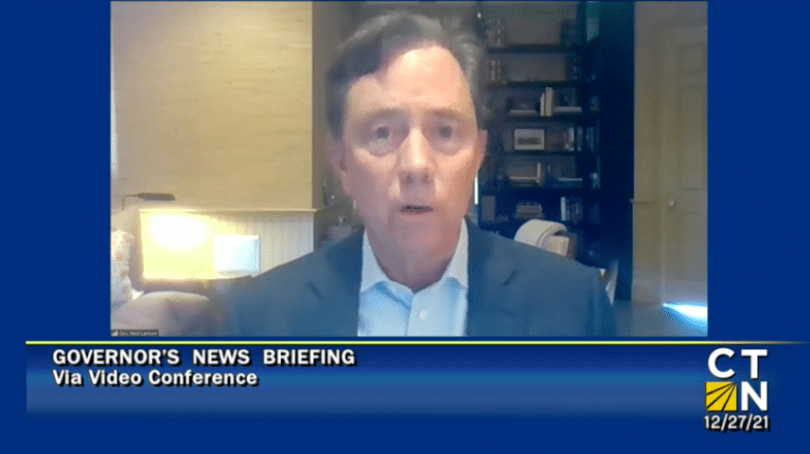 Since Thursday, there have been 241 new COVID-19 cases reported in West Hartford, and that number likely doesn’t capture all of the home tests that residents have taken.

What a difference 13 days make. Gov. Ned Lamont is embracing at-home COVID-19 tests and plans to distribute three million rapid tests, along with six million N95 masks to Connecticut residents to help curb the spread of the virus.

With an infection rate around 10.7% Monday (9.8% for the past seven days), Lamont says they will begin to distribute iHealth rapid tests to Connecticut residents.

Department of Administrative Services Commissioner Josh Geballe said Lamont signed off on the plan to secure the tests on Christmas Eve.

“Hustle and persistence,” Geballe said describing the effort to obtain the tests during a supply chain crunch.

He said it was a scramble, but they leveraged the relationships they built in the early days of the pandemic when there was a PPE shortage.

“The good news is Connecticut is at the front of the line,” Lamont said.

He added that it was “a nice Christmas present that we got that access.”

Lamont had been trying to ramp up testing in Connecticut, but sites have been filling up quickly, lines have lasted hours, and some sites have run out of testing supplies.

“Look I think we gotta make testing more easily and readily available at no cost,” Lamont said Dec. 14 after a morning address to the Middlesex County Chamber of Commerce in Rocky Hill. “What we’re doing now at the state level, I’ll see in terms of making testing available. We have testing capability all over the state where you go in and get tested for free.”

The governor’s chief spokesman, Max Reiss, clarified at the time that there were no plans to launch a state-sponsored at-home testing initiative. But he said the administration had also not ruled out such a program in the future.

As of Monday the Department of Public Health was still in the process of adding seven more community testing sites to its current roster of 23 state-sponsored sites.

Lamont said Monday that the first 500,000 iHealth kits, each containing two tests for a total of one million tests, will be distributed on Thursday, Dec. 30.

The Education Department will distribute another 1 million two-test kits to K-12 schools beginning next month until supplies are exhausted.

Lamont said they want to keep kids in school and parents at work and these tests will help with that.

The Connecticut Department of Public Health, Connecticut Division of Emergency Management and Homeland Security, and Connecticut National Guard will oversee the distribution of the kits, with support from regional and local emergency management teams.

Public Health Commissioner Manisha Juthani said the tests, which were paid for with $18.5 million in federal funds, would be given to municipalities to be distributed.

Plans for that distribution are still undetermined.

Aimee Krauss, director of the West Hartford-Bloomfield Health District, said information about the local distribution would be forthcoming.

“Connecticut is currently experiencing another surge in COVID-19 cases that is being driven mostly by the highly transmissible Omicron variant,” Lamont said in a press release. “As a result, the demand for tests has outpaced the supply of testing available through our statewide network of about 400 sites. The week between Christmas and New Year’s Day is likely to be a period of high transmission, and we have to get 2022 off to a good start by helping residents identify COVID-19 quickly and take those steps to isolate appropriately to curb any further spread.”

Lamont added that the addition of these at-home tests will immediately expand the number of tests available in Connecticut in a very short period. Last week, about 250,000 tests were reported to the Connecticut Department of Public Health.

Juthani said the goal was to limit the expected holiday surge. She asked residents to limit the size of holiday gatherings and only take what tests they needed.

“Because of the scarcity of these kits, I am asking the residents of our state to please take only the kits that you need for your immediate family so that we can distribute as many as possible to help flatten the Omicron curve,” Juthani said.

Geballe said the test won’t count when it comes to state employees who need to meet the state vaccine or testing mandate. Testing of state employees was suspended two weeks to help with the busy holiday testing lines.

Monday’s announcement mirrors programs in states around the country to ease access to testing by providing residents with free at-home testing options. Earlier this month, Massachusetts Gov. Charlie Baker announced his administration would deliver more than 2 million rapid tests to around 100 communities with high poverty levels.