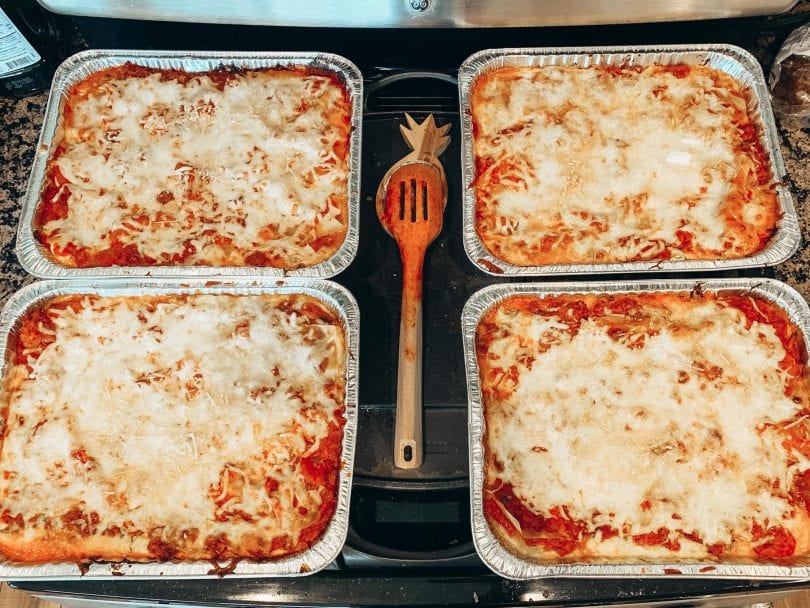 Joy Delaney’s recent post about Lasagna Love in the Neighbors & Friends in West Hartford Facebook group garnered hundreds of Likes, and a slew of volunteers.

Simsbury resident Joy Delaney is a firm believer in getting by with a little help from your friends. A single mother and Hartford public school teacher celebrating her 15th year of teaching, this year, Delaney is also the regional leader of Lasagna Love, a national movement that aims to strengthen communities by providing homemade meal deliveries to families in need.

Lasagna Love seeks to eliminate the stigma associated with parents asking for help, a cause that Delaney feels passionate about. She credits a strong support system for helping her through a difficult time last year when her 8-year-old son Wesley needed surgery.

“I had a number of friends dropping off food for me and just knocking on the door, leaving me some groceries and then leaving,” Delaney recalled. “I really found that to be the greatest way to share love with each other. I wanted to repay it.”

Now Delaney is doing just that, overseeing a growing number of Lasagna Love volunteers to deliver homemade meals to families in West Hartford and throughout the area –  from Hartford to Simsbury. After learning about the organization on social media, Delaney started out as a volunteer before working her way up to become the regional leader of the Greater Hartford area.

“Lasagna Love was started by a blogger in the L.A. area, and it sort of moved its way across the country,” Delaney said. “Originally, it was called Lasagna Mamas, and that was the big thing; it was on the Today show, where it was referred to as that. But now it’s being referred to as Lasagna Love, in order to make it more inclusive of everyone that wants to volunteer.”

The way it works is simple. “Someone who’s requesting a meal puts it in through the website, and they get matched up with one other person who wants to cook,” Delaney explained. “It’s as anonymous as it can be. It’s not like you have to have a whole conversation about it – you just fill out this form, and you can put as much or as little information as you want. Some people tell us the whole story of what’s going on, and other people just say, ‘I could really use a meal.’”

Once the form is filled out, the individual receives a text from a volunteer asking when to drop it off. “There is really a no-questions-asked policy,” said Delaney.

Delaney says she was inspired to take on a bigger role in the movement after finding out that it had yet to gain widespread attention in Connecticut.

“Connecticut was a very quiet area,” Delaney said of her early days with Lasagna Love. “It hadn’t really made its way here yet.”

Just six months later, the movement is rapidly gaining momentum. “Right now in the Hartford area, we’re at about a dozen requests a week,” she said. “And the more people hear about it, the more requests we get. So that number could double next week, especially as we head into the winter months.”

Luckily, many people are eager to help. “Literally we get people volunteering every single day,” said Delaney. “Every week I have five or ten more people to add to my volunteer list.”

So far, the response to Lasagna Love has been overwhelmingly positive.

“The most rewarding part is the gratitude that is expressed from families when we’re delivering their meals,” Delaney said. “We’re getting things like ‘I didn’t know how I was going to feed my children tonight,’ and ‘This is such a blessing; I don’t know what I would do without this.’ Just seeing the fact that people are really appreciating it is the most important part.”

In preparation for the upcoming season, volunteers are currently in the process of diversifying the menu options.

“A lot of people are doing Thanksgiving casseroles,” Delaney said. “They’re planning ahead so that as we get closer to the holidays, we can change it up and do some more holiday-specific things.”

She added that despite the specificity of the organization’s name, Lasagna Love is not limited to one type of food.

“People don’t have to make a lasagna – not everybody loves lasagna, and we have a lot of people who are putting through allergy requests like gluten-free or dairy-free,” Delaney said. “The only sort of rule is that [the meal] needs to include veggies.”

The vegetable rule pays homage to Lasagna Love founder Rhiannon Menn’s secret sauce, which is filled with hidden vegetables to promote a balanced diet for kids.

Delaney notes that participating in Lasagna Love brings families together in more ways than one. In her experience, cooking meals for other families has led to special moments with her own loved ones.

“My son is very into it. He’s always like, ‘Oh, are you doing some Lasagna Love stuff?’” said Delaney. “He’s very empathetic, so he’s like, ‘People that don’t have food, we need to make sure they have food.’ That’s part of what Lasagna Love was based on:  a mom and a daughter cooking together for people who needed it. And that’s a big part of it – one family helping another family.”

As far as the future is concerned, Delaney says she has no plans of stopping. “We’ll keep doing it as long as there’s a need in the area,” she said. In the coming months, Lasagna Love will be partnering with other nonprofits in the area to spread the word.

In the midst of so much instability in the world today, Delaney reflected on the importance of supporting one another.

“There’s this Mr. Rogers quote we’ve been throwing around in the Lasagna Love community, about how whenever there’s something really bad going on, you’re supposed to look for the helpers,” she said. “It feels good to be one of the helpers.”

If you are interested in volunteering or requesting a meal from Lasagna Love, visit their website at www.lasagnalove.org for more information.