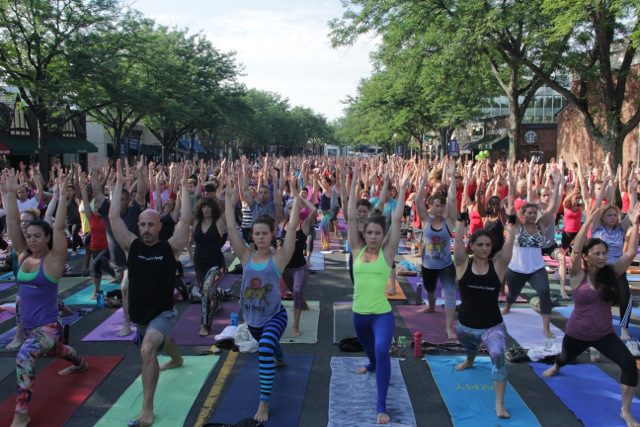 A crowd of more than 2,000 is expected to arrive in West Hartford Center early on Saturday morning, July 25, but the mood will likely be anything but harried as the yogis roll out their mats and prepare for a 75-minute outdoor practice on LaSalle Road.

“Get Your Asana in the Street!” reads the flier distributed to yoga studios throughout the region by West Hartford Yoga, which is once again taking the lead in organizing the annual “Om Street” event. Kate Feiner, a teacher and manager at West Hartford Yoga who heads the studio’s community participation efforts is thrilled with the buzz that this year’s event has already generated.

In 2013 there were about 600 yogis practicing on LaSalle. Last year that jumped to a record 1,100 with 20 studios participating.

“This year has been amazing. We have more than 50 studios signed on,” Feiner said Friday morning. Participants from as far away as Danbury and Stamford are expected to attend. A group from Black Hall Outfitters in Old Lyme, that ordinarily practices stand-up paddleboard yoga, is also signed up.

There are more Bikram studios than ever before planning to participate, and there are even some Crossfit facilities that have a dedicated yoga community attending. “The common theme is love for the practice. It’s a growing, amazing yoga community,” Feiner said.

The practice will begin at 8 a.m. and last for 75 minutes, and will be led by Barbara Ruzansky of West Hartford Yoga. Hands On Drumming will provide music.

“Barbara Ruzansky leads a very beautiful, inspirational, all-levels practice,” Feiner said. The practice is intended not only to appeal to yogis of all levels, but also of all ages. “We love it when people bring their kids. There’s nothing like seeing a 7-year-old in ‘Downward Dog,'” Feiner said.

She stressed that anyone can particupate – “as long as you feel comfortable getting up and down off a mat.”

West Hartford Yoga will provide a large contingent of instructors, and some of the veteran studios will also send a large group of teachers. All of the participating studios have been asked to bring an representative, and Feiner said that there will be many teachers scattered throughout the crowd offering assistance and adjustments.

Feiner anticipates that the crowd, expected to be almost double what it was in 2014, will stretch all the way down LaSalle Road from Farmington Avenue.

“It will be almost like a yoga flash mob,” Feiner said.

If the event continues to grow at this rate, it may need to expand to other roads which Feiner said will be a good problem to have.

“At the end of the day we are coming together to share our love for this practice,” Feiner said. Although the practice is personal, it also has a tremendous ability to build community, said Feiner.

“Namaste” will likely be Saturday’s word of the day in West Hartford.

For more information and to see the list of participating studiios, visit West Hartford Yoga’s event page. You can also join the Facebook event by clicking here.