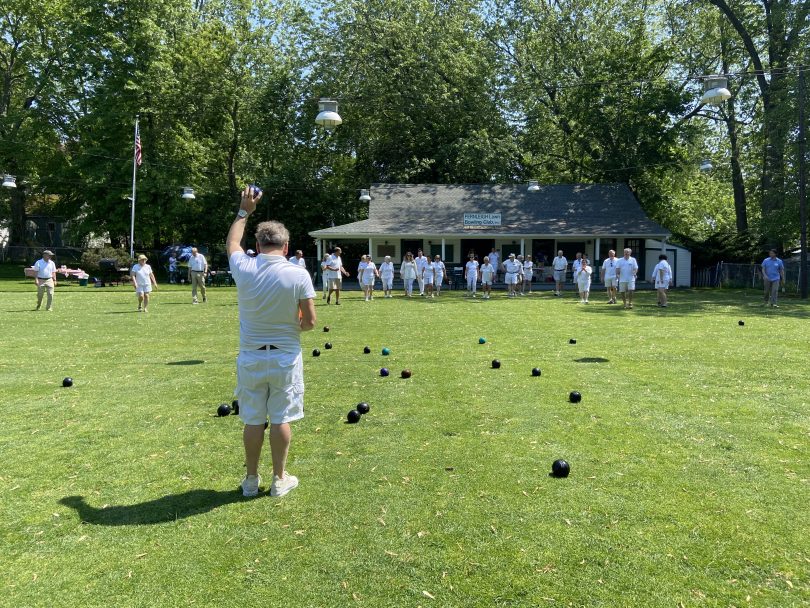 Tradition has it that most players wore white during play. Fernleigh’s dress code is more relaxed, but members do pull out the white wear for special occasions, such as opening day of the season. Photo courtesy of Fernleigh Lawn Bowling Club

Lawn bowling provides an oasis of sportsmanship and fun in trying times. 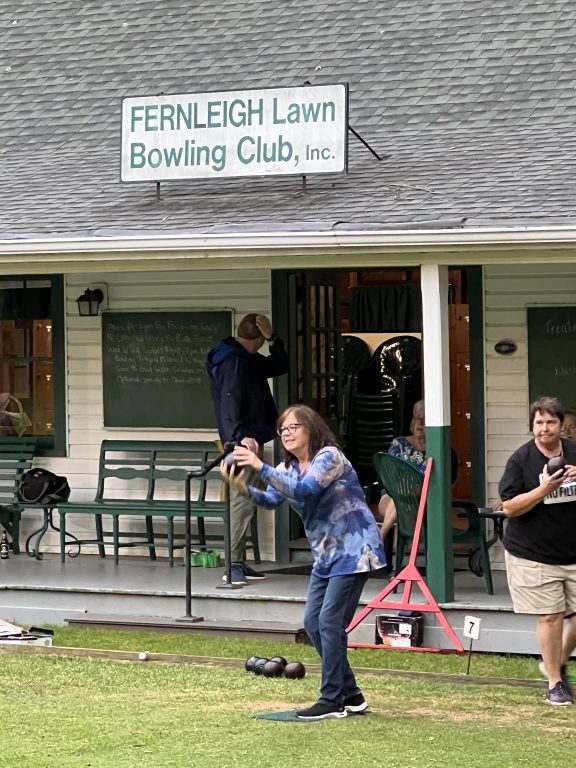 Lawn bowling is an easy game to learn but don’t be fooled. Strategy must be involved to win. Courtesy photo

Lawn bowling is alive and well and living its best life in West Hartford. With a full membership and a big birthday around the corner, the Fernleigh Lawn Bowling Club, often referred to as the “best-kept secret” in town, is in a golden era.

Diana and Ajay Madkekar are part of the reason why. The couple and their infant had moved to town from New York City in 2021, and were looking for an activity “to get out of the baby bubble,” Diana said. “We were completely charmed by the members and the club and the sport. We’re here every Thursday. It’s a great time commitment – you’re in and out in an hour and a half.” 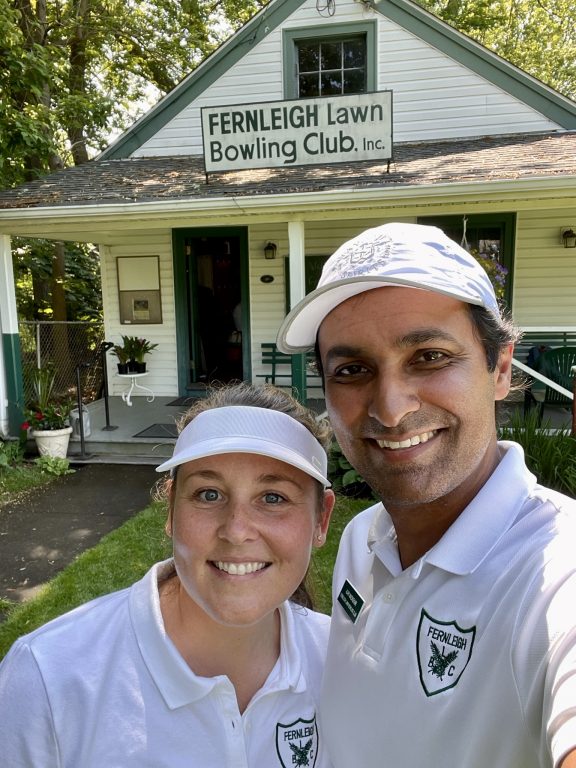 Lawn bowling season generally runs from May through October, and starts with instructional classes early in the season. “It anchors people’s summer,” Diana added. “It feels very accessible. There’s no pomp and circumstance. It’s form and strategy, not brute athleticism.”

Earlier this year, the couple developed what Ajay called “a succession plan” to pull in more members. “Seventy people took lessons this year and 26 joined as members,” Diana said, which means that membership in the private nonprofit organization is at capacity, 101, and every single one of the lockers in the clubhouse – a registered state historic site built in 1925 – is taken. Members range in age from 21 to 91.

“We love being this oasis in West Hartford,” said Past President Leslie Robertson. “The clubhouse has a lot of character.” 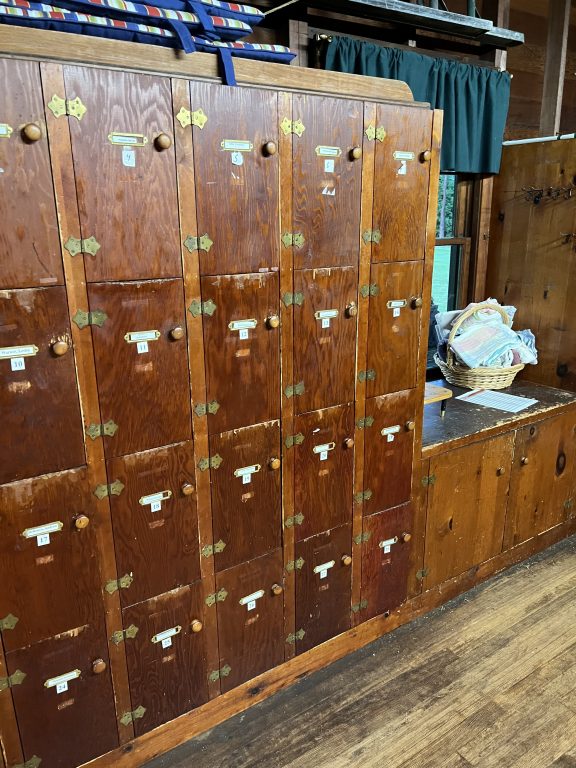 Lockers in the Fernleigh clubhouse on Lancaster Road are original and are still used by members. The clubhouse also has trophies and historic items lining the walls and mantel in the building. Courtesy photo

Bowling on a lawn?

The sport of lawn bowling was inaugurated in the 13th century, according to Fernleigh Lawn Bowling Club Past President Leslie Robertson. “On the surface it looks gentle, but it is fiercely competitive, in a nice way,” he said. “All skill levels can play and all players can participate.”

“Beginners are paired with a mentor,” Diana said. “It’s a teaching culture. You play different people every week.”

The object of lawn bowling, or lawn bowls, as it is also called, is to roll the ball toward a smaller stationary ball, called a jack. The object is to roll one’s bowls so that they come to rest nearer to the jack than those of an opponent; this often means knocking aside an opponent’s bowl or the jack. That’s how to score points and win the game.

“It’s like Bocce, only the ball is very different,” said Marilyn Lattanzi. She’s been a member of the Fernleigh Club for seven years and is the vice president of the board. 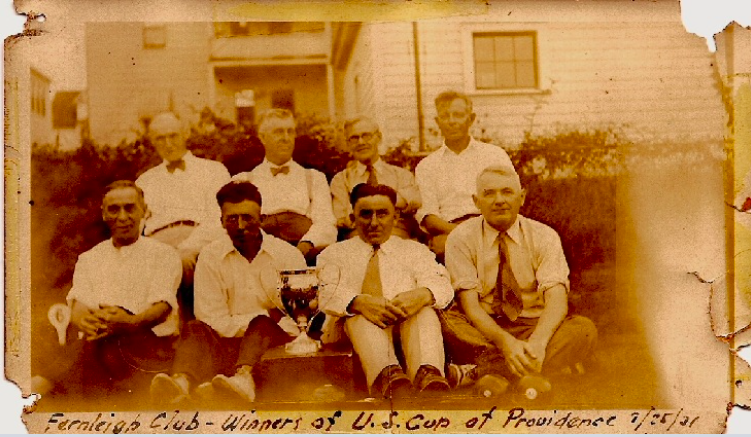 Lawn bowling is played on a green and divided into “Rinks,” and etiquette is important during play. Tradition has it that most players wore white during play. Fernleigh’s dress code is more relaxed, but members do pull out the white wear for special occasions, such as opening day of the season.

Common sense in play means a player should stand still when someone else is bowling, enter and leave the rink on the right side, and use hand signals with a playing partner, so as not to yell across the field.

“Some of the rules are very prim and straitlaced,” Lattanzi said. “We’re not like that here.”

One rule does apply, though: “You use a big rake to bring all of the balls back,” Lattanzi said. “The losing team rakes the balls. I spent my first year here raking.” 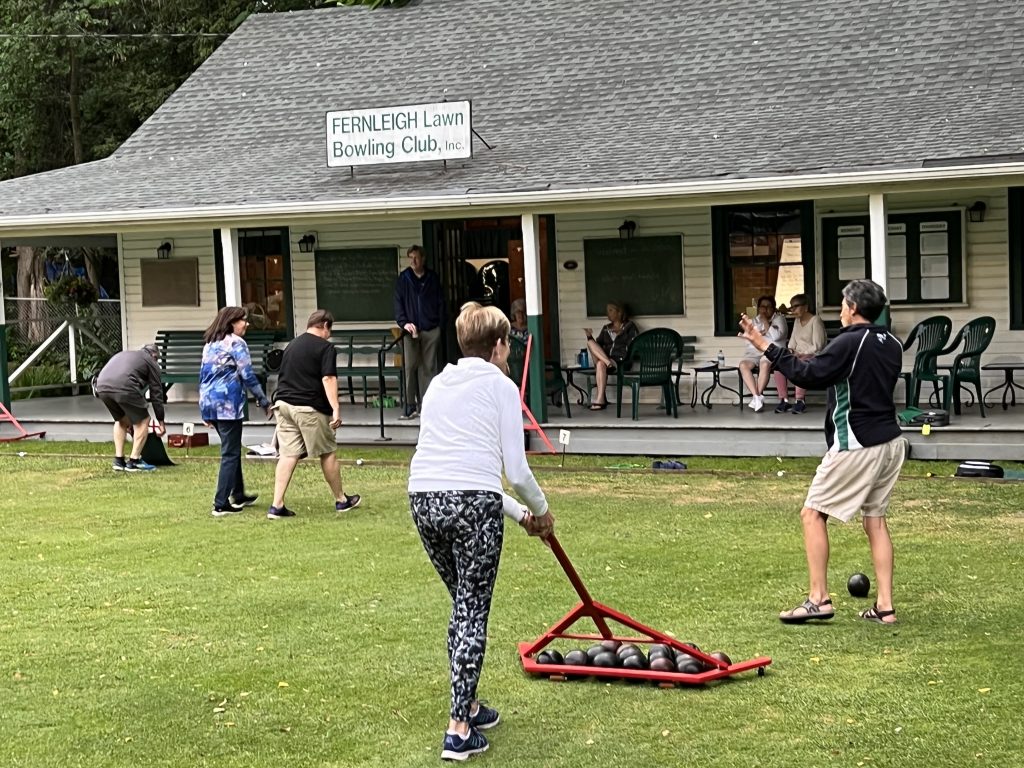 The team that is behind in a game of lawn bowling must use a rake to gather the balls for the next round of play. Courtesy photo

According to the Fernleigh Lawn Bowling Club website, lawn bowling is played in 72 countries and has been active in West Hartford since 1913. But it was the Rev. John F. Johnstone, who came to Hartford in 1908 from Canada, who convinced city leaders to create some space for lawn bowling play that same year.

In the early 1920s, the Thistle Lawn Bowling Club was playing in Elizabeth Park, where they still play, and Rev. Johnstone got the idea to create a private lawn bowling club on a private green. It was established by a group of seven men in 1923 with the name “Fernleigh” by the Rev. Johnstone, who had played with a club in Canada with that name.

The lot on Lancaster Road, where the club is today, was a mosquito swamp, and was easily purchased from its owner, while other landowners in the area surrounding the swamp were also persuaded to sell their land. This gave the club’s would-be green enough room, with land to be used for the clubhouse, which was designed by Fernleigh charter member A. Ebbets, a well-known Hartford architect. 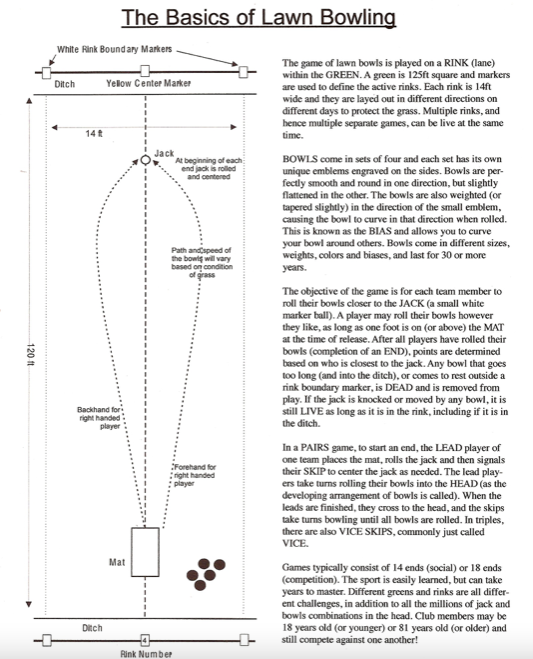 “Bowling on the Green at the club was exclusively a male activity,” the club’s history continues. “In the early years members were called ‘Fernleighs’ and gained a reputation as very fine bowlers, traveling to compete with other organizations with a weekend’s driving distance.

“In 1941 a Women’s Auxiliary was formed whose members contributed many amenities to the club. The Auxiliary members also competed in inter-club games with other women.”

Women weren’t allowed to play in the actual Fernleigh Club until 1995,” said member Marty Keena, who is also head of the House and Grounds Committee. “Now they’re the dominate demographic.”

The history of lawn bowling continues on Lancaster Road, for current members. Ginger Stolzenberg has been a member for 19 years. “Life took a turn when I retired and I saw an ad in the paper. Later in the summer I had a lesson and this man made me his partner. Two years later, I married him: Frank Stolzenberg.”

“I love the challenge of the game,” Lattanzi said. “Every time you bowl, you can either be a champion or a chump. Even with COVID, because we’re outside, we were still able to bowl and have two successful seasons.”

“I bowl like I golf, not good, but I love the people,” said member and board secretary Maureen Grothaus. “And I like the exercise part. It’s good to be outside.”

There are lots of special lawn bowling events throughout the season, too, such as croquet and cocktails, ladies’ nights, league playing, tournaments, and it’s all in good fun. According to Keena, who is the head of the centennial committee that’s going to organize the club’s 100th birthday party next year, “We’re going to spruce up the landscaping and have a ceremony recognizing the club’s anniversary,” he said.

“There’s such a sense of community. We love each other here.” 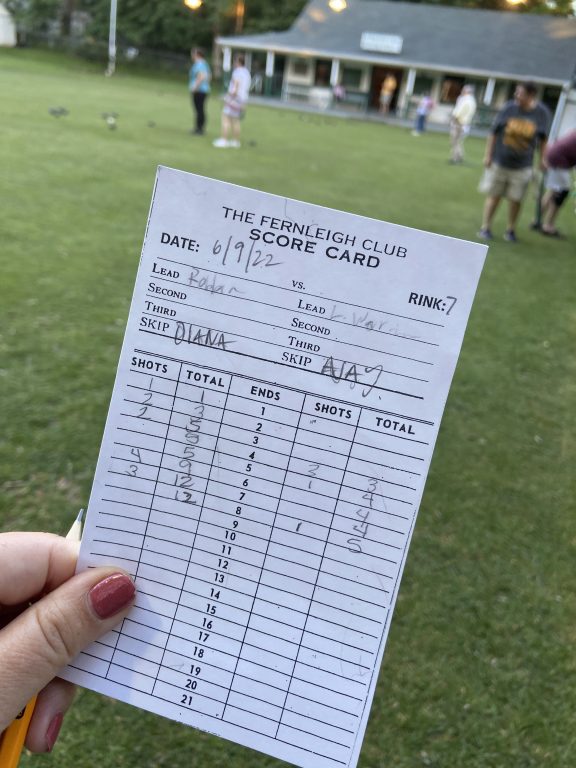 Fernleigh Lawn Bowling Club is located at 35 Lancaster Road, West Hartford. Their website is flbc.info. More information can also be found on Facebook: @FernleighLawnBowlingClub or by emailing [email protected]. 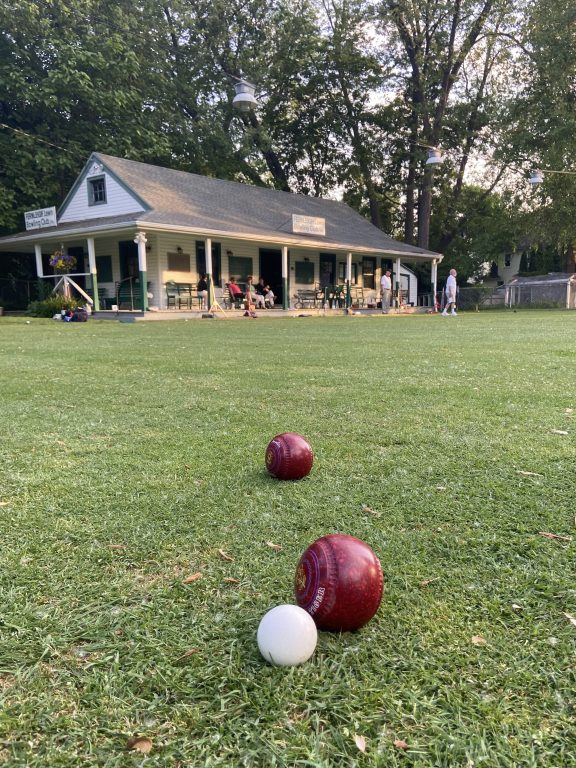 The object of lawn bowling, or lawn bowls, as it is also called, is to roll the ball toward a smaller stationary ball, called a jack. Photo courtesy of Fernleigh Lawn Bowling Club

A version of this story originally appeared in West Hartford LIFE.