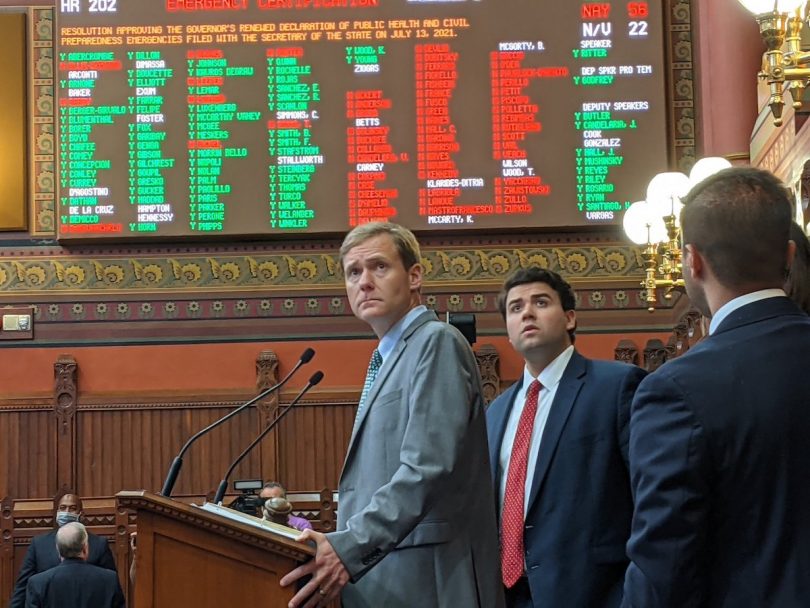 Lamont, a Democrat, has been operating with increased authority since March of 2020. Last week he requested the legislature meet to continue that authority in order to keep 11 executive orders in place beyond their scheduled deadline on July 20.

As he left his office after the vote, the governor said he was pleased with the extension.

“We have a very narrow range of places where we still have to keep the emergency powers to keep people safe. I know we had protests out here a couple days ago saying ‘yippee, emergency’s over. COVID is over.’ Well nobody told COVID and it’s still with us and we’re going to err on the side of caution and we’ve got to stay agile,” Lamont said. 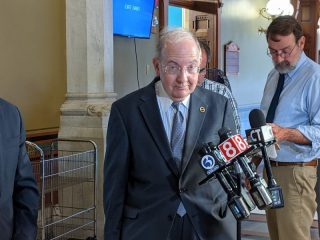 Both chambers approved the extensions until Sept. 30. Although the resolutions were passed by Democrats, a significant number joined all Republicans to vote against them. The House passed the resolution 73 to 56 with nine Democrats in opposition. The Senate voted 19 to 15 with “No” votes from four Democrats including Sens. Saud Anwar of South Windsor, Dennis Bradley and Marilyn Moore of Bridgeport, and Cathy Osten of Sprague.

“We need to be prudent and recognize that this pandemic is still ongoing,” Senate President Martin Looney said as the extension resolutions were being debated. He pointed to the state’s COVID infection rate, which rose Wednesday to above 1%, its highest since May.

“While Connecticut has a higher percentage of people vaccinated than many other parts of the country, that is not in and of itself a guarantee or a shield of protection. In fact there are thousands of people in our state who will not get the benefit of a vaccine,” Looney said.

However, Republicans opposed the extension, saying they were unnecessary because the pandemic emergency had subsided to a more manageable level. Conservative organizers had spent the last week building opposition to Lamont’s emergency powers and held a rally Monday on the steps of the state Capitol building, demanding the legislature reject them.

During a Wednesday press conference outside the Senate chamber, Minority Leader Kevin Kelly gestured to a map of the northeast region. Although roughly half the states in the country still have emergency orders in place, Connecticut and Rhode Island are alone in the northeast corner.

“If this is not an emergency in New York City, how is it an emergency in the state of Connecticut?” Kelly said. He said residents were asking the same question. “We’re being encouraged to hop on airplanes, go out to dinner, go to concerts and sporting events, but yet when you walk under this Capitol dome, it’s like we’re walking into March of 2020.”

In his letter to lawmakers last week, the governor said he needed the ongoing emergency power to allow the state to continue qualifying for federal emergency funds, manage vaccination clinics, set rules for school COVID policies, and give tenants more time to qualify for assistance if they are behind on their rent. 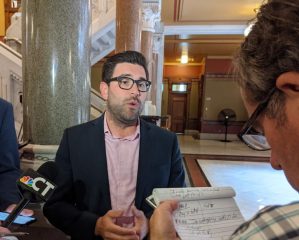 On Wednesday, his chief spokesman, Max Reiss, told reporters that Lamont has steered Connecticut in a different direction than its regional neighbors when it seemed the appropriate move.

“What you’re seeing is Connecticut has continued to move in a direction that’s best for Connecticut,” Reiss said. “Between SNAP benefits for those folks … who still need some food assistance, but also for so many of our homeless who are relying on this assistance to stay in a hotel, we feel that it’s necessary for a limited extension of the emergency.”

However, some questioned whether the emergency declarations were required to continue qualifying for federal emergency funds and pointed to other states which have found workarounds to maintain the funding without an active declaration.

Meanwhile, opponents argued the governor’s ongoing emergency power comes at the expense of the legislature’s powers, which are meant to serve as a check on the executive.

Although lawmakers passed a bill this year giving the legislature more authority to curtail the governor’s executive orders — including a provision enabling legislative leaders to essentially veto individual orders — some said proponents of the extensions were forfeiting their constituents’ voice in COVID policy.

“The governor comes to us all the time and says ‘I need things. Make suggestions. You should deal with it. You should vote on it.’ What’s before us here today, takes that power away from us, no matter what our constituents think,” Rep. Craig Fishbein, R-Wallingford, said during the House debate.

With the orders renewed beyond the start of the next school year, many parents are watching to see whether the state will require students to wear masks when they return to classrooms in the fall. Last week the Centers for Disease Control recommended that students and teachers who have been vaccinated against the COVID-19 virus not be required to wear masks. But regulators have not yet approved a vaccine for children younger than 12 years old.

Reiss said the Public Health and Education Departments were working on a policy for the coming school year and awaiting additional guidance from the CDC.

“Those conversations are currently happening and our goal is to have an update on that hopefully sooner than later because we know that all of these schools are going to be making their preparations for the fall,” Reiss said.