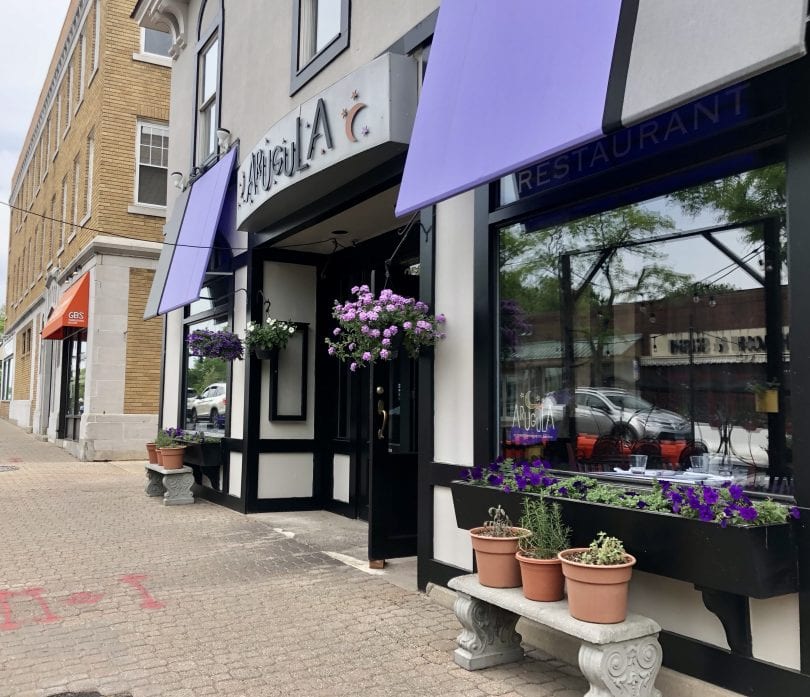 Arugula Mediterranean Bistro reopened for dinner and late night dining on May 19, and owner Christiane Gehami speaks about why she closed the restaurant in January, and the changes that have been made. 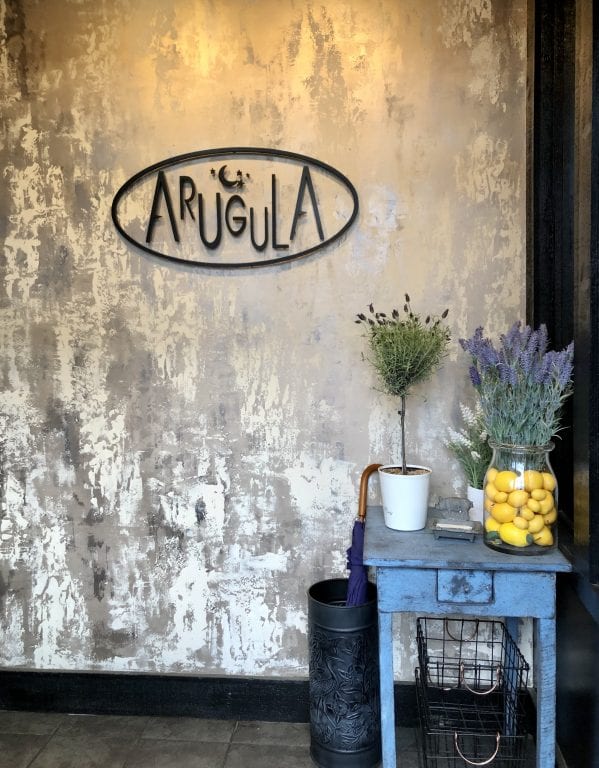 Ronni Newton contributed to this story

Christiane Gehami has officially outlived the floors at her restaurant, Arugula Mediterranean Bistro.

“It’s kept me from gaining weight. I had to make sure I didn’t fall through,” she joked.

“When we first built out the restaurant 24 years ago, I don’t think the architect realized we were in it for the long haul. The building is old already, then suddenly, we’re in year 25.”

It’s why owner/chef Gehami and her co-chef Mike Kask decided to close the restaurant in January and get the floors redone. Arugula was originally scheduled to re-open in the first two weeks of February, not only with new floors but some fresh paint, a few new items on the menu and a small bar.

“Something French,” she said.

The restaurant closed for the work on the floor, but then kitchen equipment was ruined. And while taking it out, the floors in the dining room were damaged so those had to be redone as well.

“I always wanted a tin ceiling, and a bar, and chandeliers,” Gehami said.

She considers Arugula her “baby,” and now … “She’s graduated college. She’s in her first apartment in New York City,” she said. Arugula has stepped out of her era of wearing her buckled shoes.

From the wall treatments, to the framed photographs – many of Gehami’s family and childhood – to that tin ceiling and the lighting, the space has a unique and distinctly European vibe. 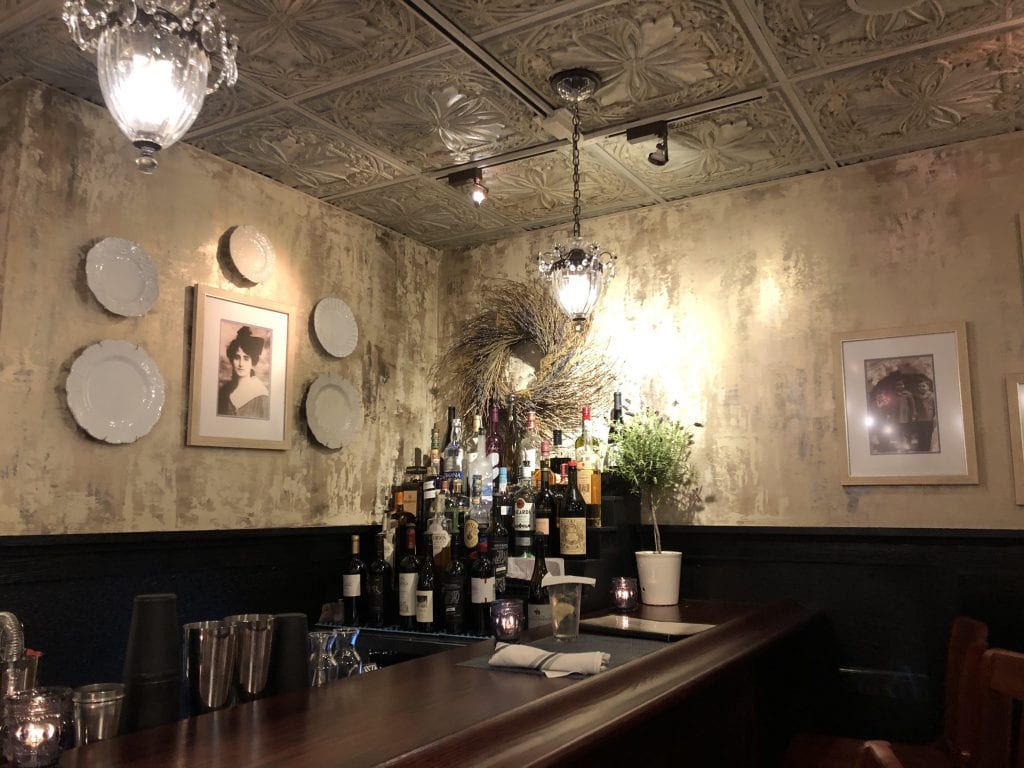 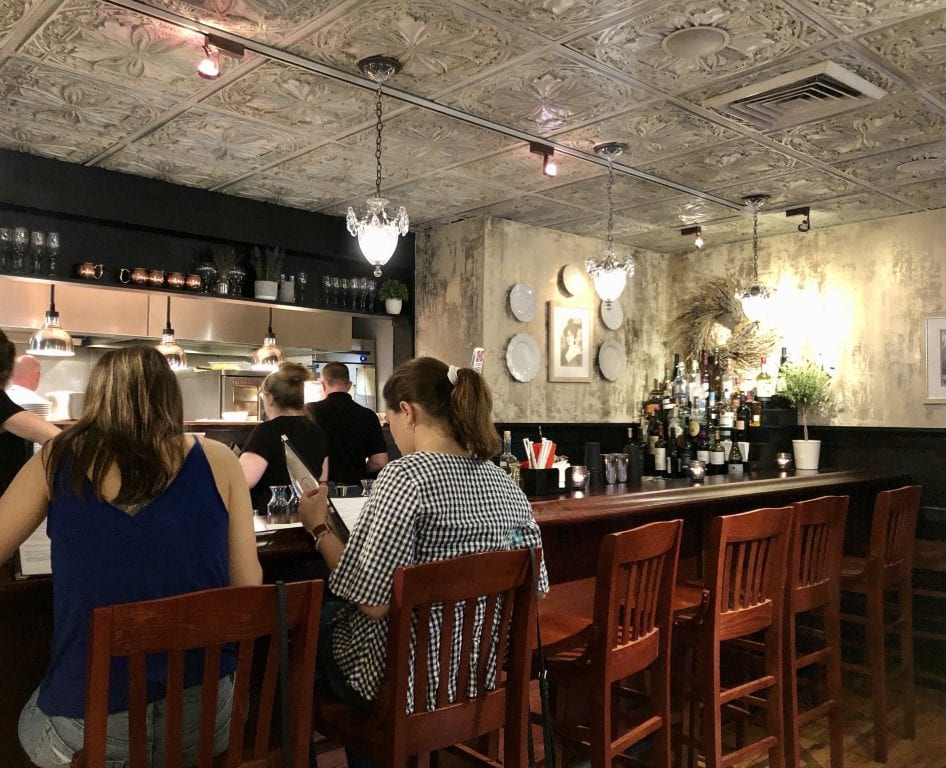 Gehami and her team – which also includes Mixologist Shari Warbelow and Steve Reynolds, who does research and development – are excited about seeing the return of al fresco dining on her patio this spring and soon offering brunch on Saturdays and Sundays again. That’s brunch with Gehami’s freshly-baked baskets of breads, scones, crepes and homemade butters. All of the food, like the rest of her menu, will be made from scratch. 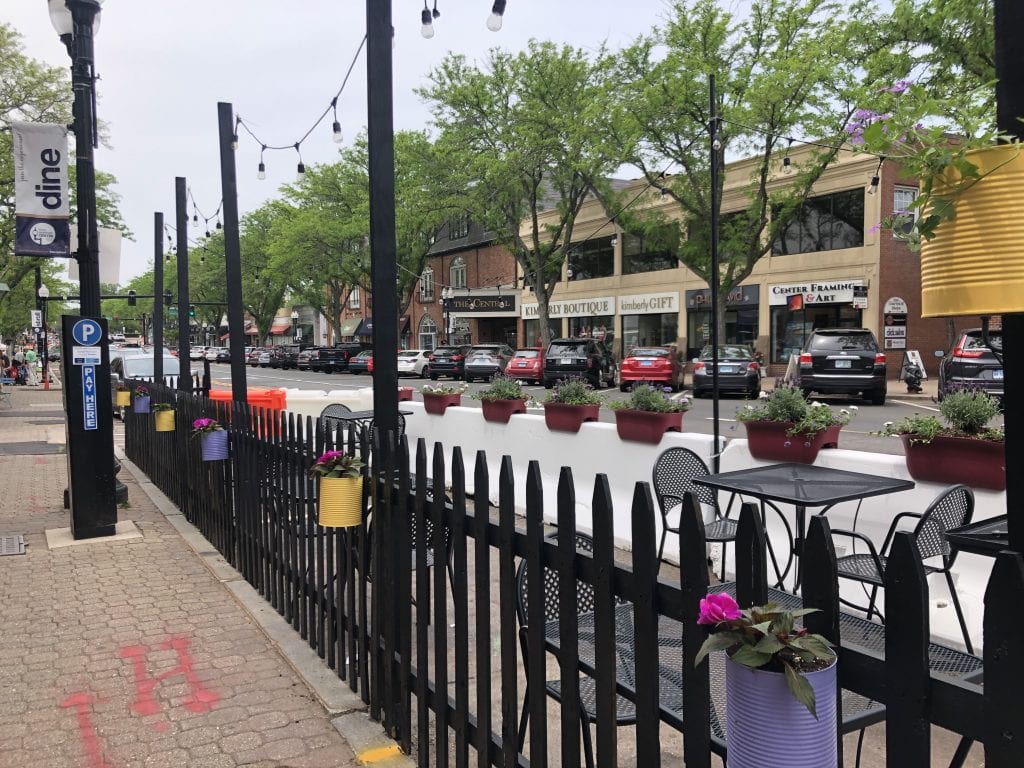 In addition to the patio, there will also be expanded outdoor dining in the alley next to the restaurant, Gehami said.

Popular items on the restaurant’s Middle Eastern menu include the warm roasted eggplant & wonton “Napoleon,” pumpkin squash and cheese raviolis in brown butter, the sampler platter of hummus, mohamara, and labani (house made yogurt cheese) served with grilled pita, and Israeli Couscous, made with or without chicken confit and piled high with vegetables in a curry vinaigrette. 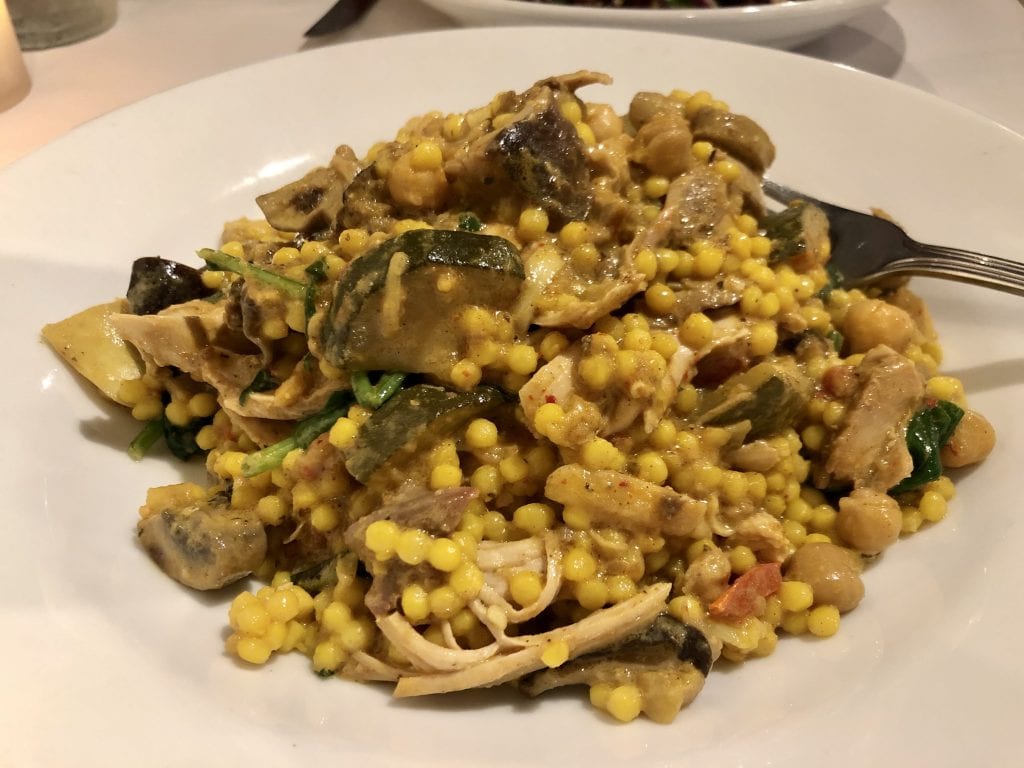 “We do flatbreads, too,” Gehami said. “We’ve been doing them since before anyone else knew what they were.” 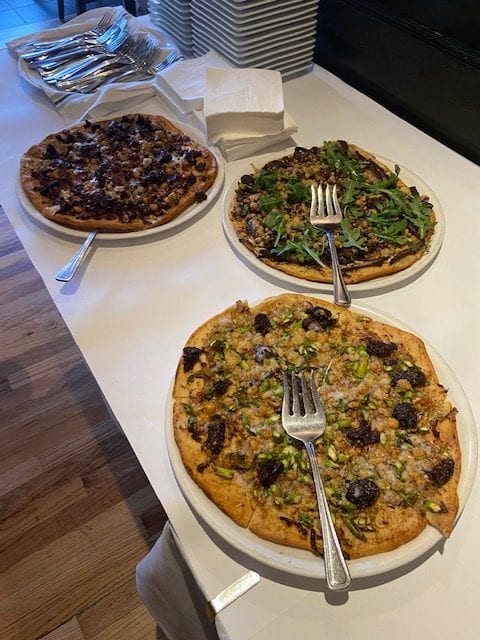 New to the dinner menu are pastas, and there’s also a late night bar menu of apps and burgers offered from 9-11 p.m. The new bar has led to the addition of some new cocktails as well, with a “botanical” theme, Gehami said.

Desserts, too, are on the menu’s most wanted list. Gehami makes all of the desserts, which include everything from a lemon-curd filled butter cake, frosted with a lemon-coconut whipped cream and garnished with berry compote to a root beer float and Affogato, vanilla ice cream “drowned” with a shot of espresso, garnished with chocolate-covered espresso beans and toasted hazelnuts. 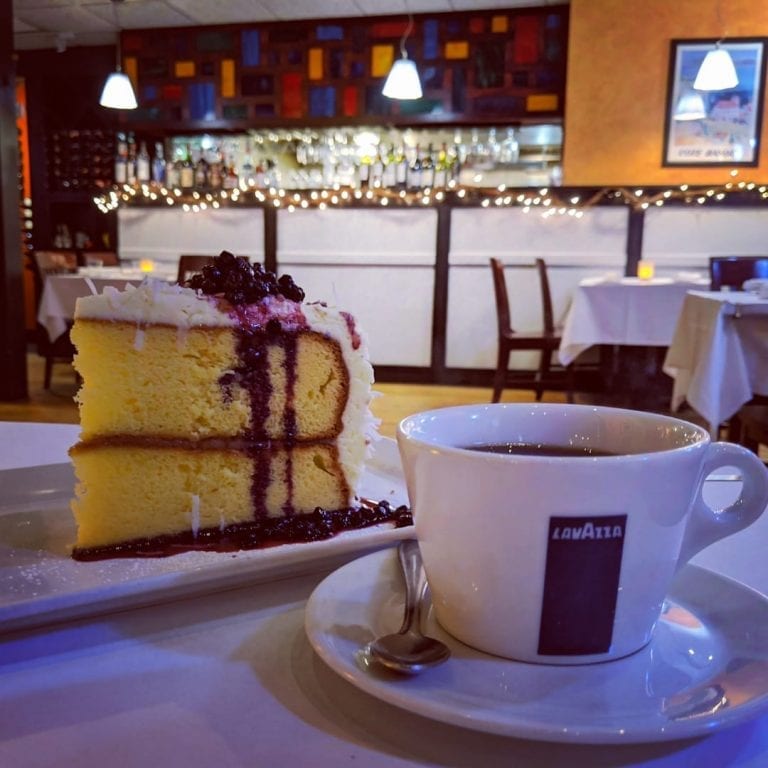 Arugula is open Wednesday through Sunday. The bar opens at 4 p.m. and dinner is served beginning at 5:30 p.m. She’s planning to bring back lunch on Thursday and Friday as well as brunch on Saturday and Sunday, but will stay closed for Monday and Tuesday. “You need your own life,” Gehami said, and this gives staff consistency in their schedules.

All staff, she said, are fully vaccinated. It was a condition of hire. 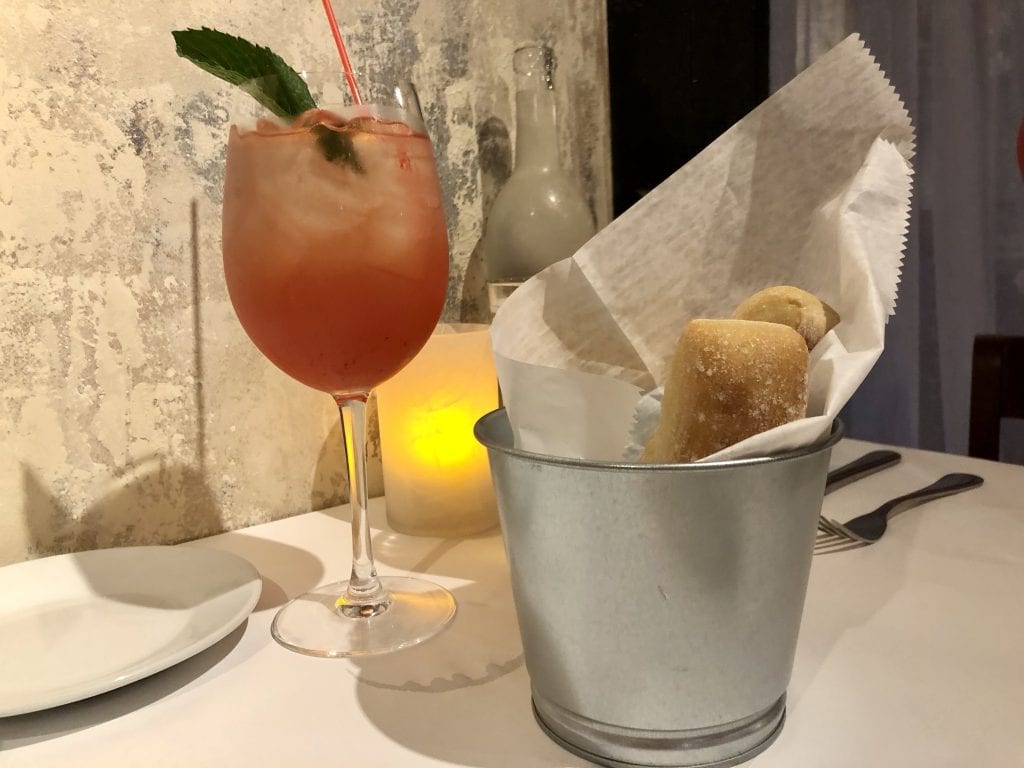 Sangria with a sprig of mint and bread with olive oil for dipping to start the experience at Arugula. Photo credit: Ronni Newton

It was after being let go from a prior job in April 1996 that Gehami and Kask opened Arugula, named after Gehami’s favorite green, in the back of an art gallery. “It had six seats,” she said.

Less than two years later, she shut down to renovate the space and the restaurant re-opened with an open floor plan and 50 seats.

She and Kask “split everything down the middle,” she said. “He did the butchering and the sauces, and I did the desserts and the menu and the marinades.”

It wasn’t until she was in her early 30s that Gehami realized she wanted to cook for a living.

“I was born in Egypt,” she said. “My dad was an engineer and suddenly, [Gamal Abdel] Nassir and [John F.] Kennedy made a deal and they let us out of Egypt. It was 1962 and I was 5. First we went to Lebanon for nine months and then we moved to Brooklyn.”

From there they came to Connecticut, living in Wallingford and Hartford before settling in Glastonbury. “I grew up in Glastonbury,” she said.

“We always knew English, but French is my first language – I majored in French literature in college – and I knew Arabic and Italian. When we left the whole family left, and moved to France, Brazil, and Italy.”

Growing up, “I always liked to eat,” she said, “but I only liked my mom’s food. We didn’t eat out, ever. The idea of going out to eat never even entered my brain. It was the 1960s too. We would get pizza once in a while and that was a feast.

“I was a legal secretary and then a paralegal. When I met my husband, he was an actuarial student. We would go out and sit at a bar and eat French fries. I’d never done that before. To this day, I like to sit at bars and eat. I want fun food.

“I never cooked, so [before getting married] I spent time with my mother learning. My mom’s an excellent cook. She made Lebanese and Egyptian food. She taught me how to marry flavors. That’s what cooking is.”

Gehami divorced three years later, but learning how to cook for her marriage had incited her passion for it. “I enrolled at MCC culinary program and went to work for Hop Brook Restaurant and then the Bee and Thistle Inn, then I worked in the kitchens at Aetna,” before opening up Arugula.

Gehami wants to dispel one myth about her bistro. “People think this is an intimate, romantic place. We hold parties in this space. Because of COVID, the number was limited to 25 people but under normal conditions the restaurant can hold up to 50.

“It’s really just a comfortable bistro. It’s like going to your favorite aunt’s house. Everyone is welcome, and in their comfiest clothes. Who am I to tell anyone what to wear? It’s what a bistro should be.”

One thing that everyone does know is how much she loves Arugula. “I’ve had my team with me forever and I love what I do.” 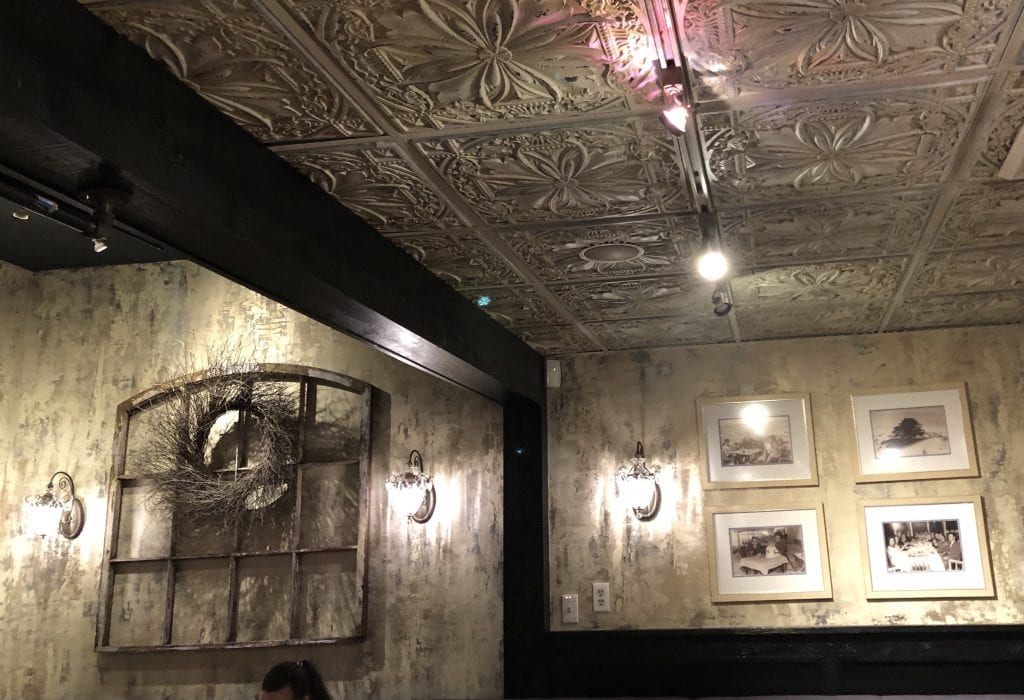 Christiane Gehami answered a series of “LIFE in the Kitchen” questions posed by Tracey Weiss with wisdom and wit.

A: Donuts! I never had any growing up. I was a tennis player in high school. We were at a sports banquet and there was a table full of things. I didn’t know what they were. I must have eaten a hundred. After that, every Sunday I couldn’t wait to leave church to go get them. I love the donuts at Elmwood Pastry and King Donuts [in Newington]. They are out of this world.

Q: What is the one thing that a budding chef should know?

A: How to keep their mouths shut. Listen. You don’t go to work in a kitchen and talk about what you learned in school.

Q: Do you have a favorite chef?

A: Barbara Lynch. She has #9 Park and a bunch of restaurants in Boston. I love the way she thinks.

Q: What is your favorite cookbook?

A: I grew up with no cookbooks; now I have about 3,000. When I first started cooking, I loved Claudia Rodin. I love Rose Water & Orange Blossoms by Maureen Abood.

Q: What herb or spice best describes your personality?

A: Za’atar. It’s the only thing that can something bland into something delicious. Toast an English muffin, melt some Muenster cheese and put a boiled egg and some Za’atar on it and you’re in heaven.

Q: It’s your last meal on earth. What’s on your plate?

A: Ful medames [A stew of seasoned fava beans that is a staple food in Gehami’s native Egypt] with a warm pita and a salad of tomatoes and cucumber. And some donuts and a black coffee! 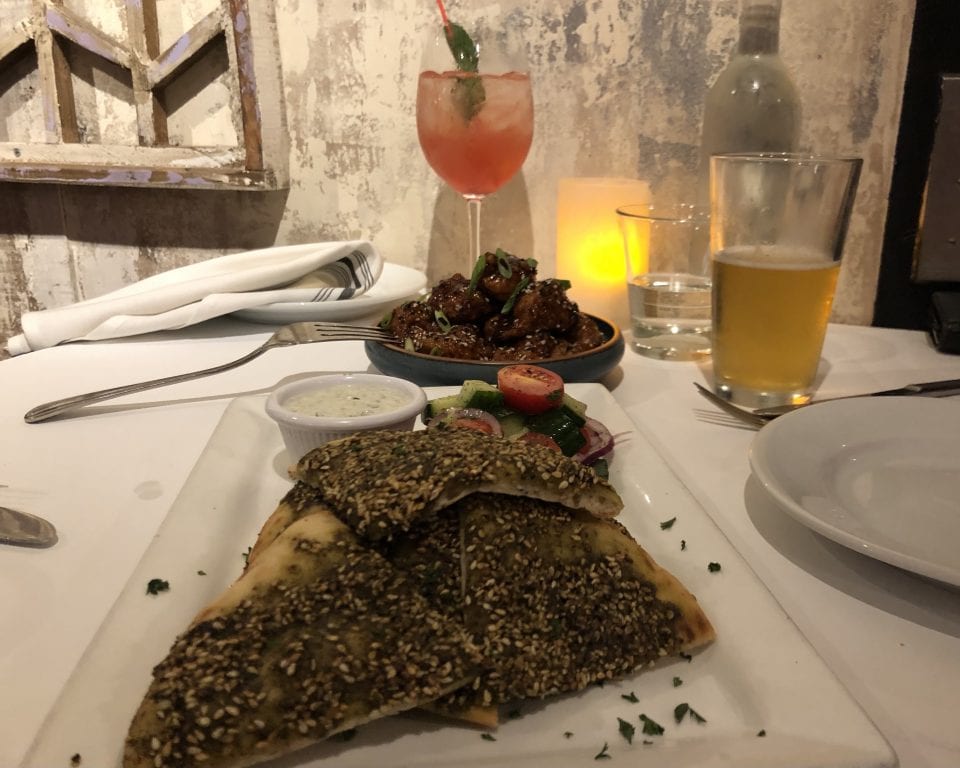 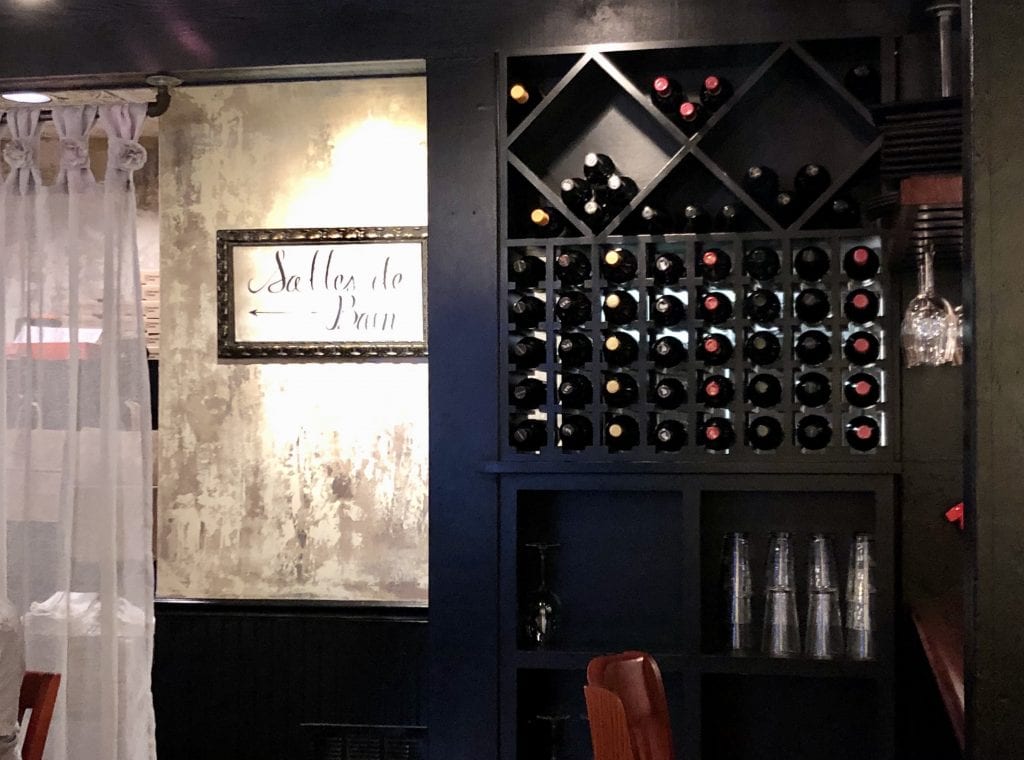 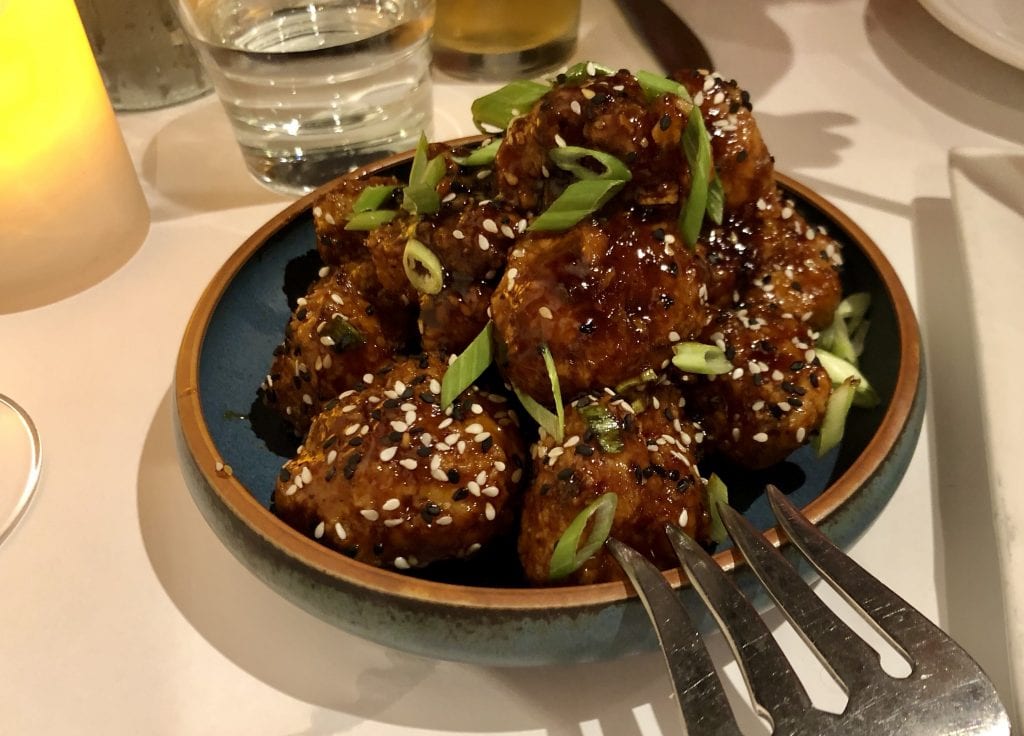 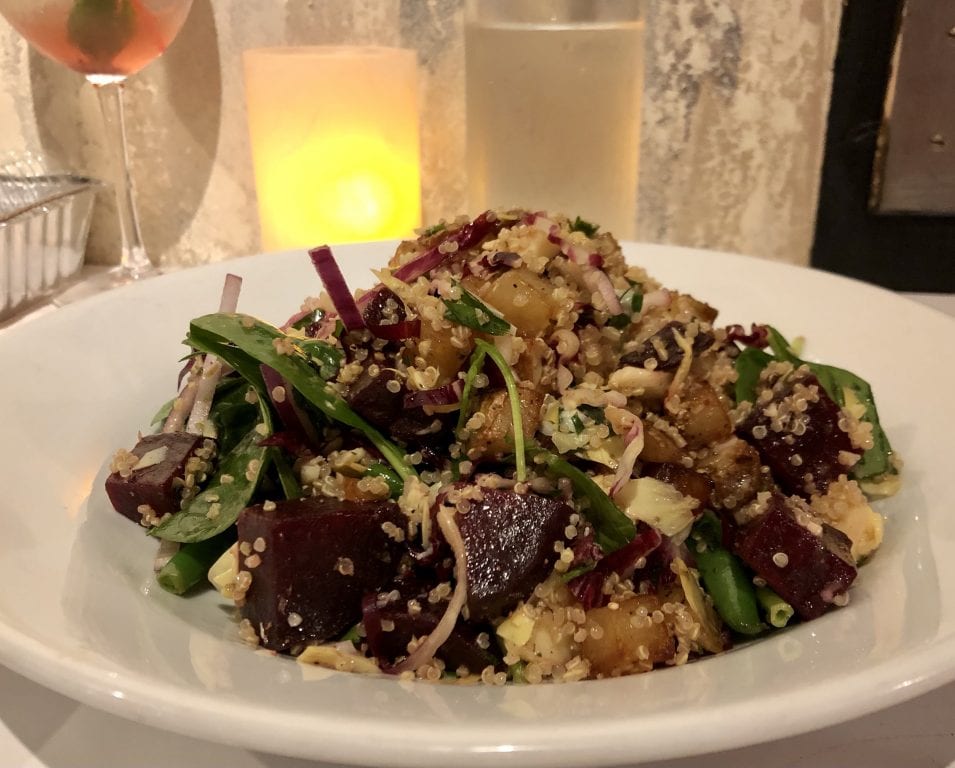 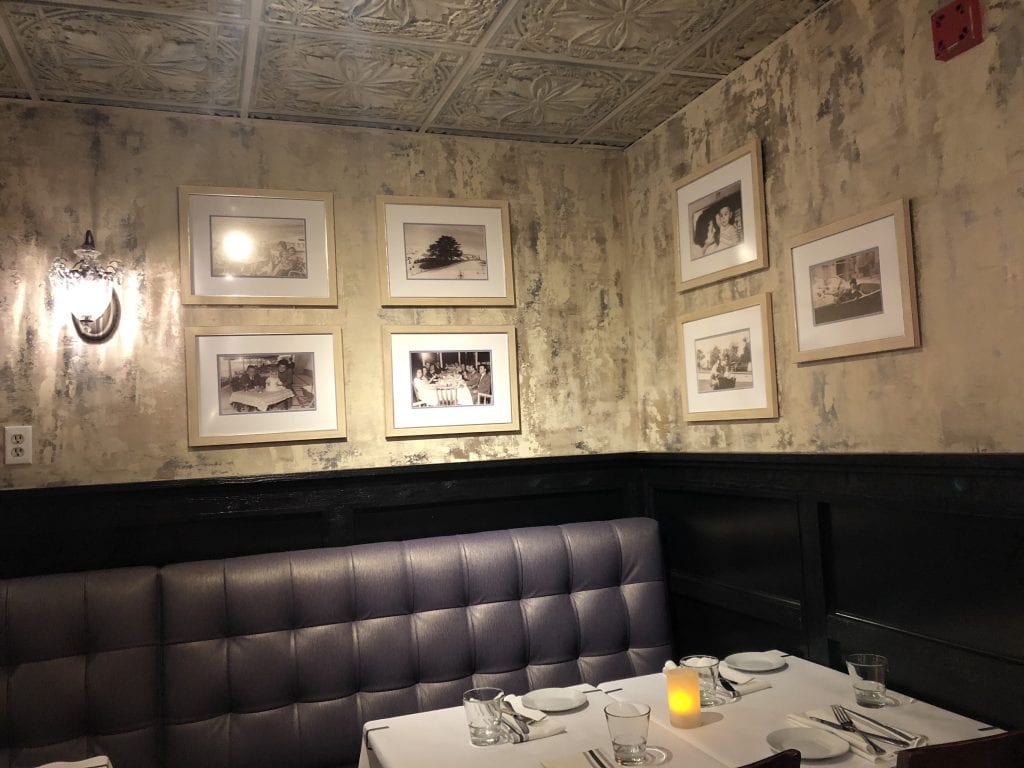 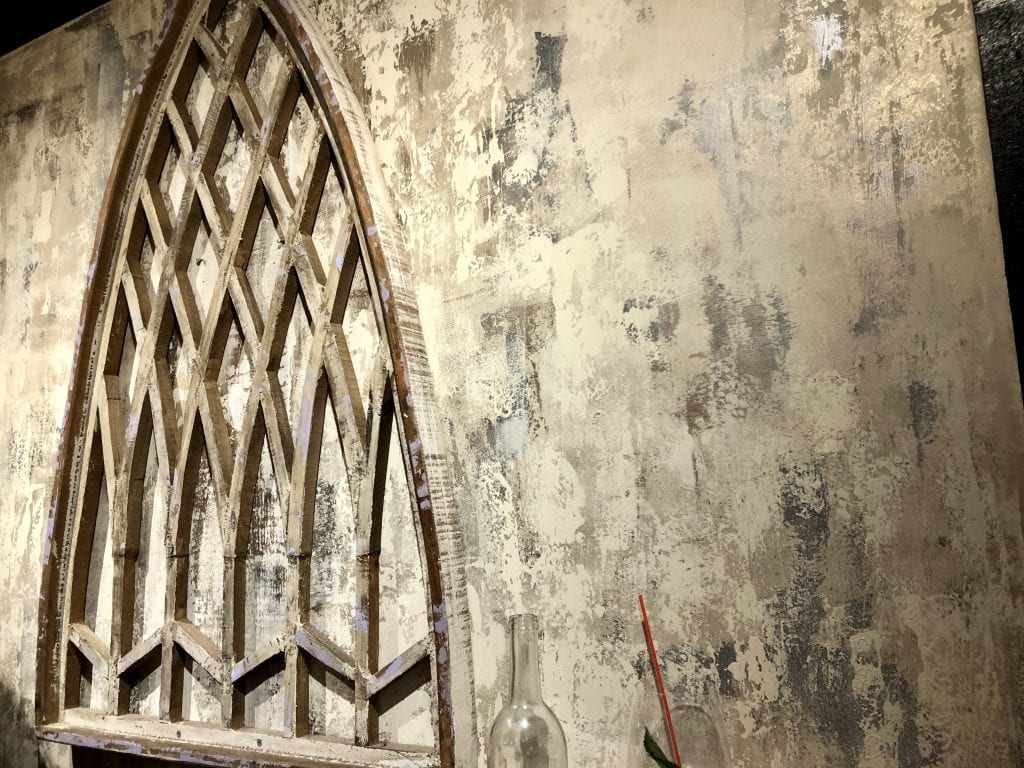 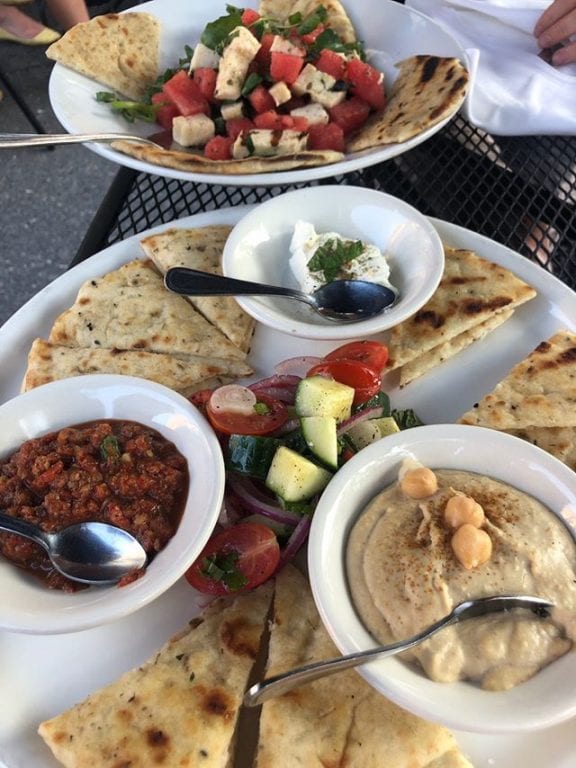 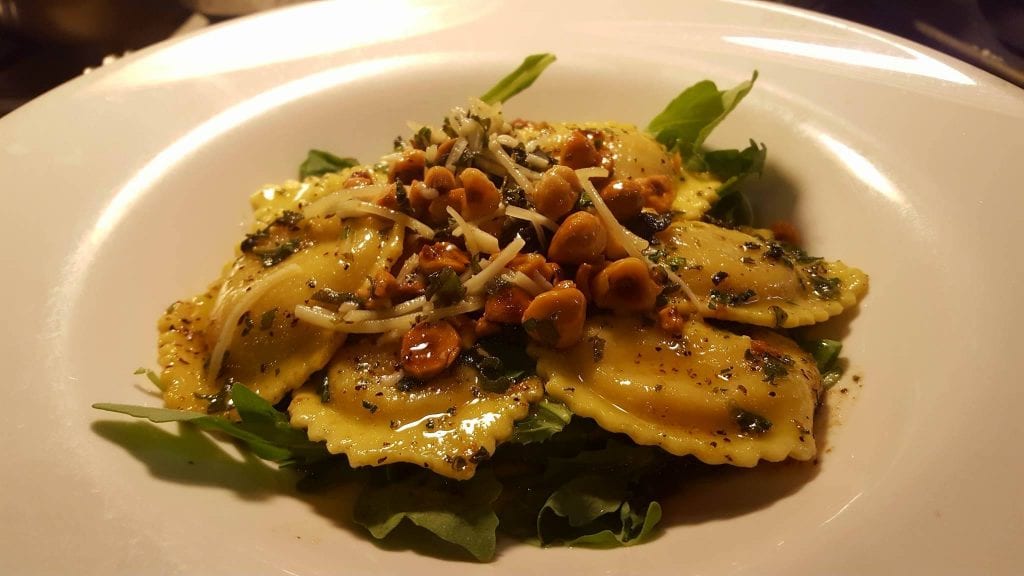 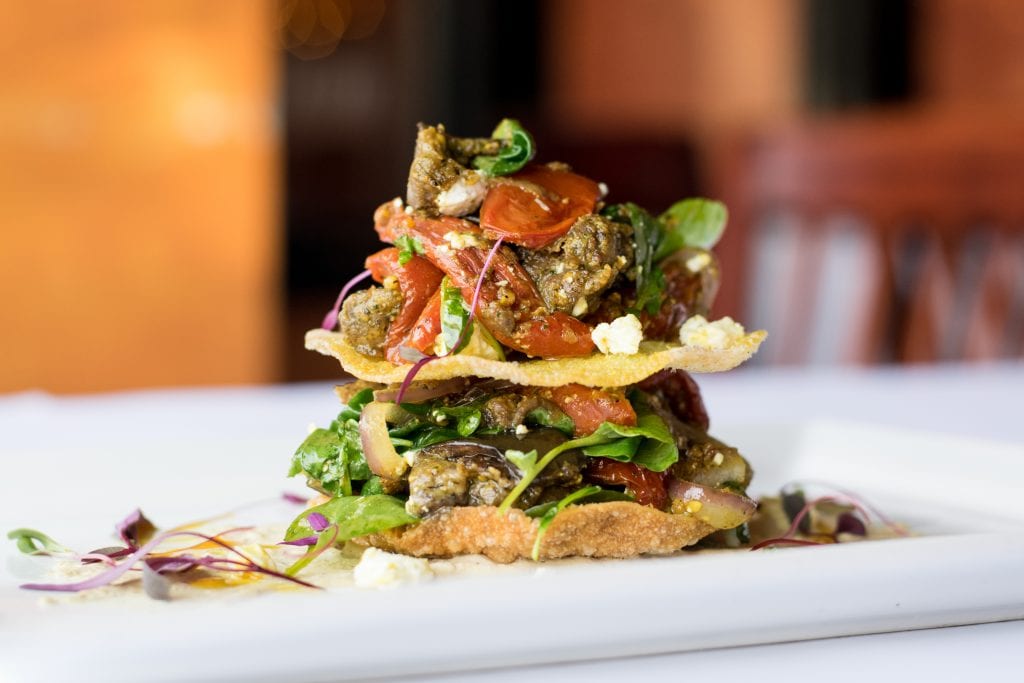 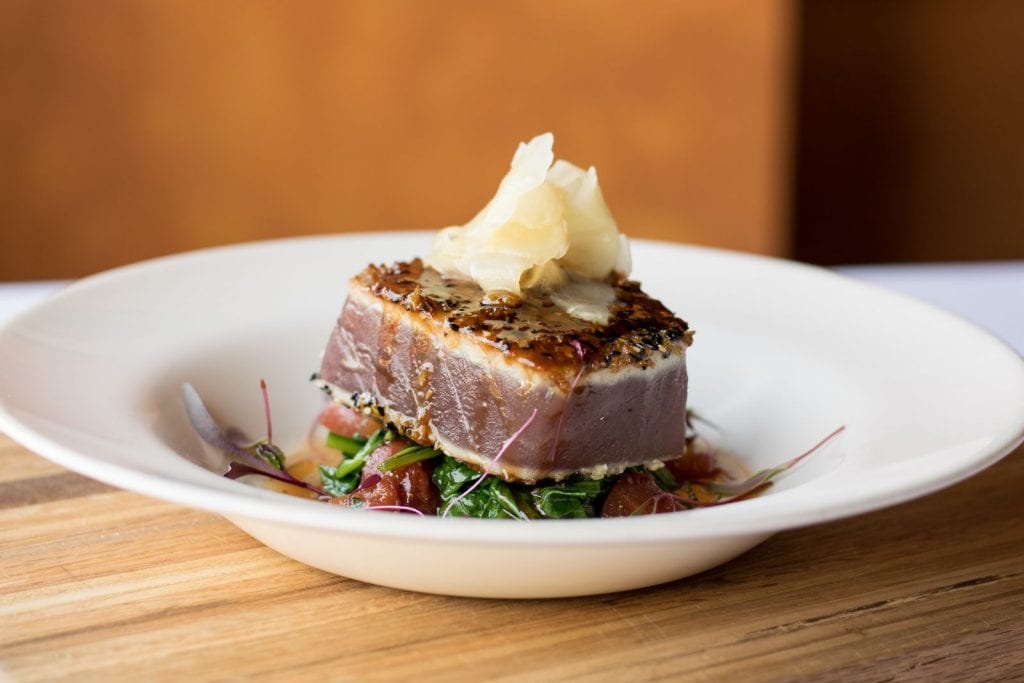 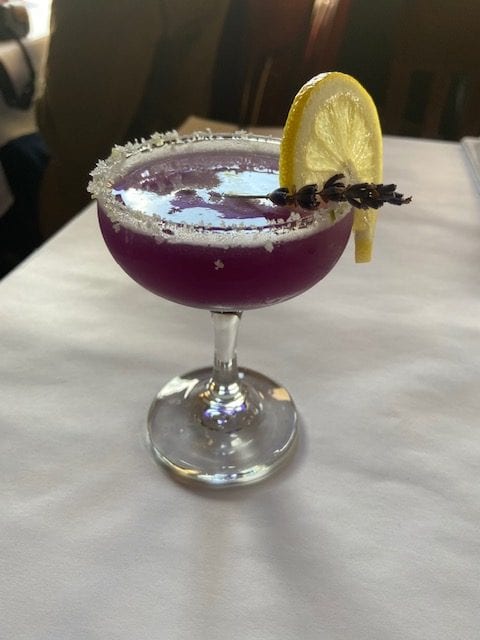 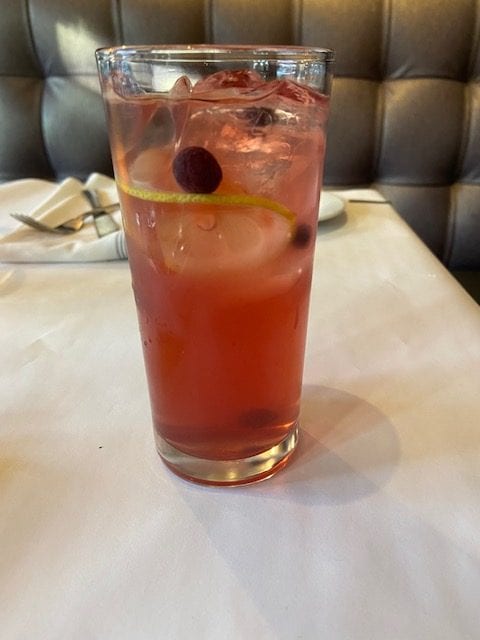 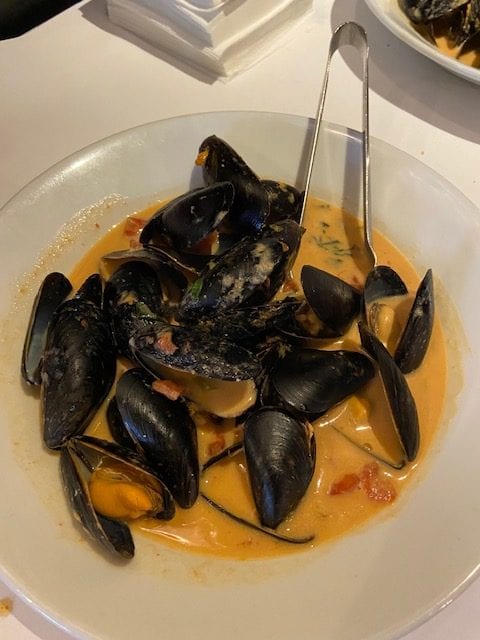 A version of this story first appeared in the February 2021 issue of West Hartford LIFE.