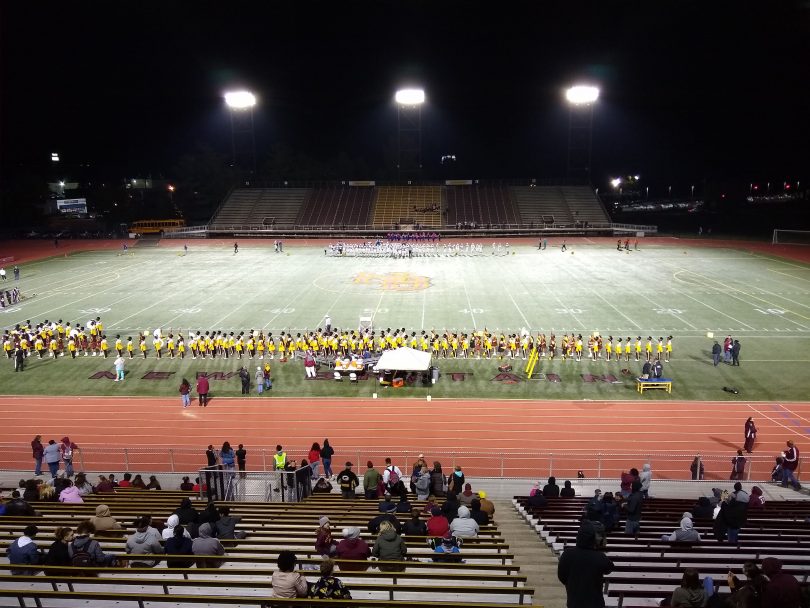 The Warriors head into the bye week after a resounding rushing performance against CCC foe New Britain.

Leading 17-0 in the fourth quarter, Lizardi’s touchdown carries helped the Warriors pull away from the Golden Hurricanes. Lizardi took his first touchdown 68 yards up the middle with 10:03 remaining, putting Hall (3-2) ahead 23-0. His second score – also from 68 yards out – answered a New Britain (1-4) touchdown at the 1:02 mark.

“New Britain had a great game against us last year,” said Lizardi. “They blew us out of the water, so it was nice to come in this beautiful stadium … and go up with the big dogs, hard hittin’ New Britain. We had to show out for them.”

New Britain made big plays on the ground in the second half, but the Warriors’ defensive line kept the Golden Hurricanes’ offense in check. New Britain, meanwhile, stymied itself with costly penalties and turnovers throughout the game, including three consecutive false start penalties in the first quarter leading to an interception.

The Golden Hurricanes’ longest play of the night came in the fourth quarter – a 39-yard rush by quarterback Tarik Hetmyer. Hetmyer finished the drive himself from four yards out, ending Hall’s shutout bid with two minutes left. New Britain failed a two-point conversion that would have made it a two-possession game.

Hall wasn’t without its faults, as the Warriors lost two fumbles and allowed New Britain to block a PAT attempt.

“I’m pretty happy with the way we’re playing,” said Hall head coach Frank Robinson. “We just don’t execute all the way. We had too many chances to change the scoreboard and we just didn’t do it, so obviously there’s some things we’ve gotta work on, but it’s a long season. It’s a tough league, so every week is going to be important.”

The Warriors capitalized on mistakes by the Golden Hurricanes to get on the board early. Gabe Salomons caught a one-handed interception to set Hall up at New Britain’s 28-yard line. Julian Baker scored a 32-yard rushing TD on the second play of the ensuing drive to give the Warriors a 7-0 lead with 19 seconds left in the first quarter.

Late in the second quarter, Hall recovered a New Britain fumble at the Golden Hurricanes’ 4. Lizardi brought the Warriors to the 1-yard line before Matt Keller finished the drive with a QB keeper with three minutes left.

Taking over at their 31-yard line 59 seconds before halftime, the Warriors drove to New Britain’s 34, setting Noe Ruelas up to make a 51-yard field goal to extend the lead to 17-0 heading into the break.

With four rushing touchdowns as a team, Robinson said the continuing success of the ground game is a catalyst for the offense.

“We felt like anytime we could get some runs going, it’s just going to open up other things,” Robinson said. “We’re pretty fortunate. We have a pretty decent line and our running backs are doing a good job, so credit to them.”

Through five games, the Warriors have matched their win total from 2018, when they went 3-7. Hall finished last season with a win over Conard, and Robinson said the team’s morale is still as high as it was at the end of last year.

“The spirit’s there, you know. The energy’s there,” he said. ”You only have so many years to play high school football, and they’re making the most of it. They’re realizing this is their time.”

Hall heads into a bye week and will travel to South Windsor (2-3) on Thursday, Oct. 24.