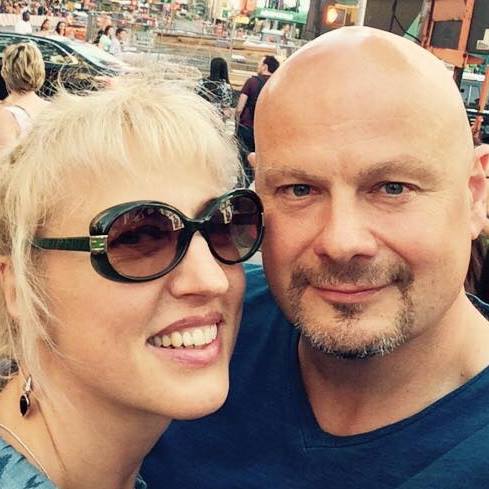 Oleg Mashkov, who has lived in the U.S. for 23 years, 20 of them in West Hartford, was supposed to leave the country by Friday, but is hospitalized for mental health reasons.

West Hartford resident Oleg Mashkov was supposed to board a plane from Kennedy Airport on Thursday, using the one-way, non-stop, non-refundable ticket to Russia that U.S. Immigration and Customs Enforcement (ICE) required him to purchase.

“Based on the ensuing panic of needing to upheave his life of 23 years in the U.S., where he’s followed all the rules, he ended up being hospitalized for his mental condition,” Mashkov’s attorney, Allison Grosz of Brookyn, NY-based Bibicheff & Associates P.C. said Friday. She said the ticket had to be non-stop to Russia, so that there is no chance of his deplaning and seeking asylum elsewhere.

Mashkov was ordered to leave the country by Friday, but had purchased a ticket to leave on Thursday, Grosz said. “He was physically unable to report to the airport on the 22nd for his departure because he was committed to a psychiatric clinic,” Grosz said.

She said she hasn’t faced this situation in the past, and isn’t sure what will happen to her client, who has continued to request a stay despite receiving a denial from ICE.

“Right now I feel that I’m nailed to the wall,” Mashkov told We-Ha.com through Grosz on Friday. “I’ve been fighting for my status for more than 20 years. I’ve always followed the rules and ICE’s directions and instructions to get legal status.”

Mashkov said, “I feel now like an animal that’s being hunted because I followed all the rules and didn’t disappear.”

He believes that if he returns to Russia, he will likely face severe persecution or be arrested. He has been an outspoken critic of Putin and supporter of democracy, Grosz said, and believes that he will be treated as a spy or traitor.

“Oleg, a Russian Jew, came to the United States from Russia to escape religious hostility,” but is being sent back to a country that still has similar views, West Hartford Mayor Shari Cantor said. “He has been a resident of the West Hartford community for over 20 years.” She said that he reached out to town officials about his deportation because he and his wife were distraught about the notice.

“I reached out to our federal delegation to grant a stay for his deportation as he has been in a state of crisis,” Cantor said. “Subsequently I received information that although Oleg has not been charged with a crime, he has had a couple of incidents with the police.”

Mashkov does not have any convictions. The only court records available online were for a 2014 divorce from his former wife. Charges from an arrest in 2010 were not prosecuted.

“The question of why ICE is deporting someone after nearly 25 years in a country who has never been convicted of any crime is very troubling. I may not have the complete story, so I hope that the regional district of ICE will look at the whole picture and treat every individual, including Oleg, with humanity and respect,” Cantor said.

Grosz said that Mashkov has been “documented the entire time [he has been in the U.S. and has always followed their rules,” but has unfortunately fallen through the cracks of the process. He has a social security number, has filed and paid taxes, and has worked legally in jobs that have included as a caregiver for the elderly, car salesman, owner of an agency that placed caregivers and companions for elderly in homes, videographer and photographer, laborer and handyman, and most recently as a courier with about half of his business consisting of deliveries of medications and organs for transplant.

According to Grosz, Mashkov has always followed the rules. In a joint affidavit that he and his legal permanent resident wife, Alena Rubatskaya, signed as part of his request for a stay of removal, he stated that he entered the U.S. on April 7, 1995 with a  B-2 visitor visa, after fleeing his “native Russia after being persecuted for my Jewish religion.” He stated that he applied for asylum within weeks, but was denied. He has been working, paying taxes, and attempting to obtain legal status ever since.

Grosz was not Mashkov’s attorney when his request for asylum was denied in February 2000, but from reading the decision she said she believes it was made in large part because he was unable to prove his Judaism. “It’s hard to document yourself as being persecuted when you can’t be open with your religion,” which was the case for many Jews living in Russia who had to hide their religion.

Mashkov’s application for legal permanent residency was approved through the Diversity Visa lottery in 2001, and although he was granted a green card it was never physically issued that year for procedural and bureaucratic reasons. He has continued to live and work in the United States while requesting a stay of the deportation order, and is currently married to Rubatskaya, an immigrant from Belarus who is legally a permanent resident but not yet a citizen. Mashkov, in his affidavit, stated that he is the primary financial provider for his wife, as well as the provider of emotional support for his wife who suffers from “a severe mental health condition.”

“Technically speaking he’s being deported because he has been here without lawful status for 23 years,” Grosz said. She understands that ICE is just doing its job, yet is unsure specifically why Mashkov has not been granted a stay.

“[ICE was] put on notice of the danger of psychiatric breakdown, and yet they denied anyway,” Grosz said. She said he is a very real danger to himself.

“They can show up and execute the order of deportation,” Grosz said. Even if it doesn’t happen while he is in the hospital, she said it will likely happen as soon as he is released.

Mashkov had been wearing an ankle bracelet monitor, and Grosz said she reached out to both ICE and BI, the company that monitors the ankle bracelet, to make them aware of the situation when he was unable to report for his flight. The ankle bracelet, which was beeping at the clinic, was removed from Mashkov’s ankle, but Grosz said that BI was outside the clinic on Friday “almost forcing their way into the clinic.” Through his attorney, Mashkov said Friday that they had been “harassing his wife all morning.”

A spokesperson for ICE issued the following statement to We-Ha.com in an email Friday afternoon: “Mr. Mashkov was scheduled to leave March 22 but was hospitalized before that could take place. Stays of removal are only approved at the discretion of ICE ERO leadership; after review, Mr. Mashkov’s  request for a stay was denied as his case did not qualify under agency urgent humanitarian criteria. ICE will continue to monitor his case after his release from the hospital.”

A representative for Senator Richard Blumenthal said that their office “does not have a case on behalf of Oleg Mashkov.”