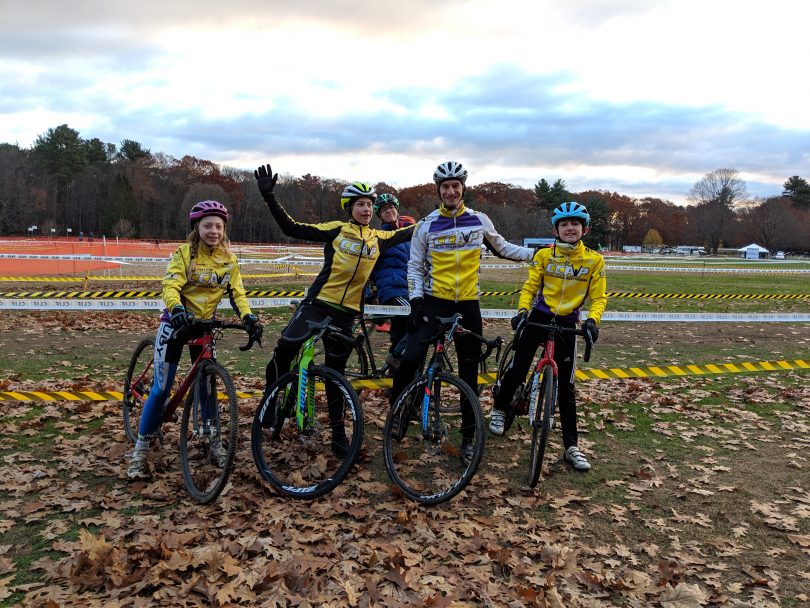 Kids have a blast once they’re on a bike. CCAP wants every child in the state to have the opportunity to ride a bicycle. Photo credit: Dave Francefort

Registration is open now for the Connecticut Cycling Advancement Program fall series, including with the West Hartford ERRACERS.

[Editor’s Note: A version of this story originally appeared in the August issue of West Hartford LIFE] 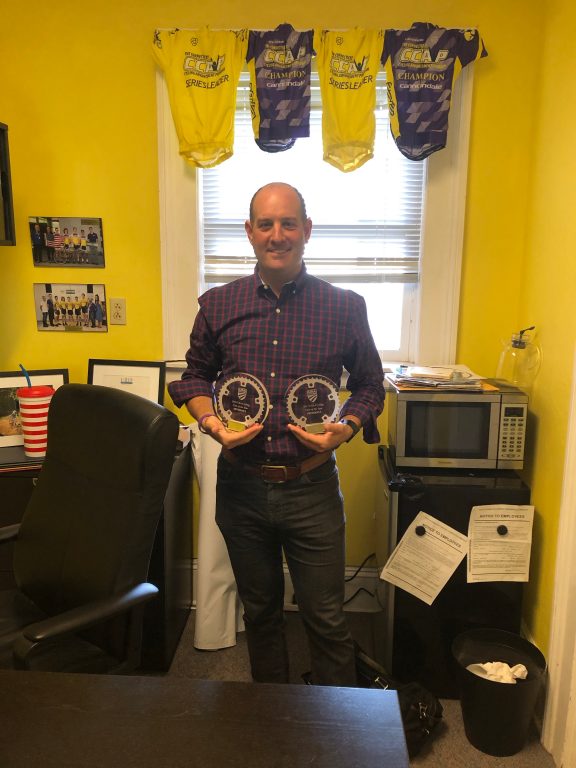 Jed Kornbluh, holding two awards for Club of the Year from USA Cycling, is the new Executive Director of the Connecticut Cycling Advancement Program, which aims to get every child on a bicycle. Courtesy photo

A real winner doesn’t necessarily just win bicycle races. A real winner is still cycling at 50, for the sheer love of the ride.

So says West Hartford resident Jed Kornbluh, who has taken over the job as executive director of the statewide non-profit organization, Connecticut Cycling Advancement Program, or CCAP.

It’s a bittersweet move for Kornbluh, who took over in June, following the tragic death in April of David Hoyle. Hoyle formerly the executive director of CCAP, was found dead at Wadsworth Falls State Park in an apparent mountain biking accident, according to the state Department of Energy and Environmental Protection.

“We were very good friends,” Kornbluh said. “The legacy he built I wanted to see continue, and I thought, ‘I’ll regret it if I don’t throw my hat into the ring for the job.”

According to its website, www.ctcyclingadvancement.org, Connecticut Cycling Advancement Program’s mission “is to ensure that Connecticut’s youth and their families have access and exposure to an organized state-wide youth cycling league. Additionally, youth and their parents should be able to see a clear avenue that allows them to develop as far as their ambition, skills and abilities can take them. The sport of cycling teaches a child or young adult a wealth of values, social skills and mindsets that help them become successful in every aspect of their life, and the CCAP is proud to provide kids across the state with the opportunity to participate in a safe and positive team-based environment.”

“We’re here to put kids on bikes,” Kornbluh said. “Our goal is to create champions of cycling for life.”

If anyone understands the love of cycling, it’s Kornbluh, who was literally raised on a bicycle.

Jed’s father, a manufacturer of soda supplies, was a cyclist. “My parents met in 1970 on a blind date,” Kornbluh said. “They would ride bikes together, but he always rode ahead of her. So, she told him she wouldn’t ride with him.”

In Amsterdam on business, Jed’s father met a man who said he would sell him a tandem bicycle. On his word, Kornbluh’s father gave him money for the bike. Several months later, a wooden crate arrived with the tandem bike.

“I was raised in Vineland, New Jersey, on tandem bikes,” he said.

His parents were also very active in raising money for their synagogue through local bike races, he added. “We always had busy weekends on bikes.”

Kornbluh raced in high school, “then quit because I had no way to get to the races,” he said.

“When I was 18, I was a freshman at Temple University (in Philadelphia). I got a job as a bike messenger. I just went down and they hired me. I worked before and after classes. I learned the streets of Philly.”

When someone suggested he race, he jumped in and moved up, from a Category 5 to a Category 2, though he is humble about his ability. “I have a little talent but a lot of love for the sport.”

When his daughter Evelyn turned 8, “she told me she wanted to try it.”

In addition to Evelyn, now 13, Kornbluh and his wife, Sarah, also have Ben, 11, and Nate, 9. So Kornbluh himself got back into racing and riding.

In 2015, while the family was still living in New Jersey, “I was invited to join the Sandy Hook Ride,” Kornbluh said. “I knew enough about the mission and I was happy to jump aboard. And here these West Hartford CCAP kids were coming down (David Hoyle’s CCAP regional team is called the West Hartford ERRACERS, which benefits Everyone Ride Run Against Cancer, Everyday) and “were winning handily,” he said.

“Dave’s positive attitude was infectious. He exuded professionalism, exuberance and love of community service. I came home and told my wife, ‘I met the most amazing guy.’”

At the same time, “Sarah is from West Hartford, and she wanted to come back here to be near family,” he said. “She got a job at Pratt & Whitney and we moved.”

Kornbluh wanted to get involved. He met Morgan Rueckert, a partner at Shipman & Goodwin. “He was the head coach for ERRACERS. He got me coaching with the program,” Kornbluh said.

Kornbluh was also still running his own European textile apparel company. “I sold it in 2015 then started selling raw materials for sports textiles to the industry,” he said, until he took the CCAP position in June.

“I am very humbled to have this job.” 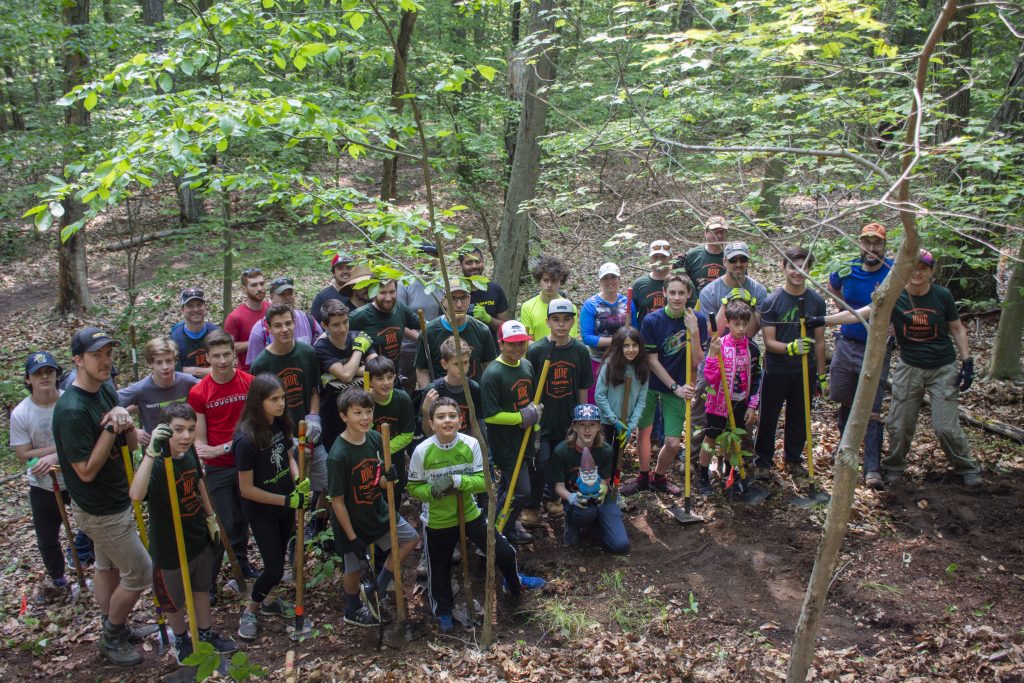 “Our goal is to continue our mission and grow the program,” Kornbluh said. “We want a team in every school.”

More than 50 Connecticut school districts and towns have created CCAP-registered cycling programs or are in the process of establishing cycling clubs and teams. There are 550 young riders participating in mountain biking or racing in these programs. In 2018, the CCAP hosted 33 cycling events, with the majority of those events designed to grow cycling in Connecticut’s schools. CCAP is a member of Member of USA Cycling and USAC. There is a fee per child of between $200-300, and it includes a license and a uniform.

The organization takes every child from 9-18, “boys and girls of any skill level. Everyone is included. No one sits out,” said Monika Stokes. She is the director of youth program administration.

“The emphasis is on teamwork,” Stokes said. “It’s fun and comradery, disguised skills as games and relays. The kids thrive. Some may be athletic and take it to the next level.”

Kids need the fun, she added. “Kids these days get driven everywhere. Biking means they get to be kids— get dirty and get scuffed up.

“Kids love it. They become better riders. Many start racing and go out with friends for an adventure in the woods. They’re proud if they can master a skill, go up a hill or go through a rocky section of trail they challenge each other and themselves.”

CCAP members also do some volunteer work, such as clearing and maintaining trails. “They clear and make trails safe,” Stokes said. They’re proud if it.”

“Every kid has the ability to ride a bike,” Kornbluh said. “It teaches them the rules of safety and turns them into cyclists. You get a feeling of freedom unlike any other you get from any other aspect of life—unplug from everything. If my wife knows I’m grumpy, she says, ‘Go out and ride and come back with a fresh perspective.’”