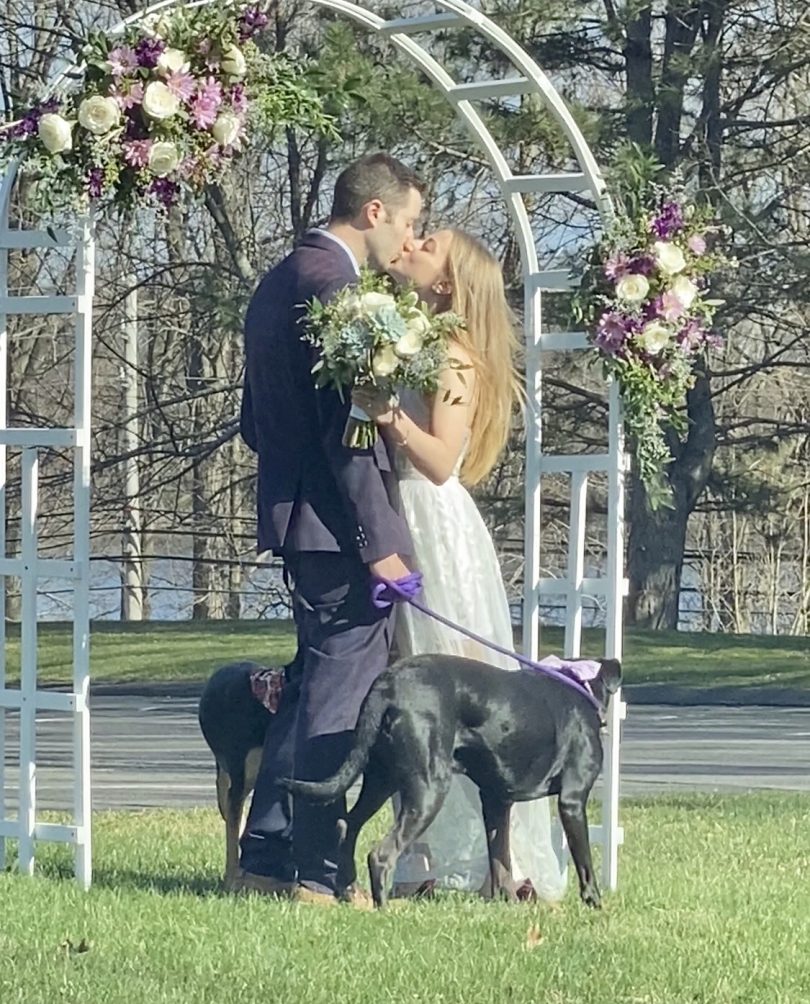 A West Hartford couple wasn’t able to hold the elaborate wedding they initially planned due to the COVID-19 pandemic, but they got married on the day they had chosen with a small group of guests watching from their cars. 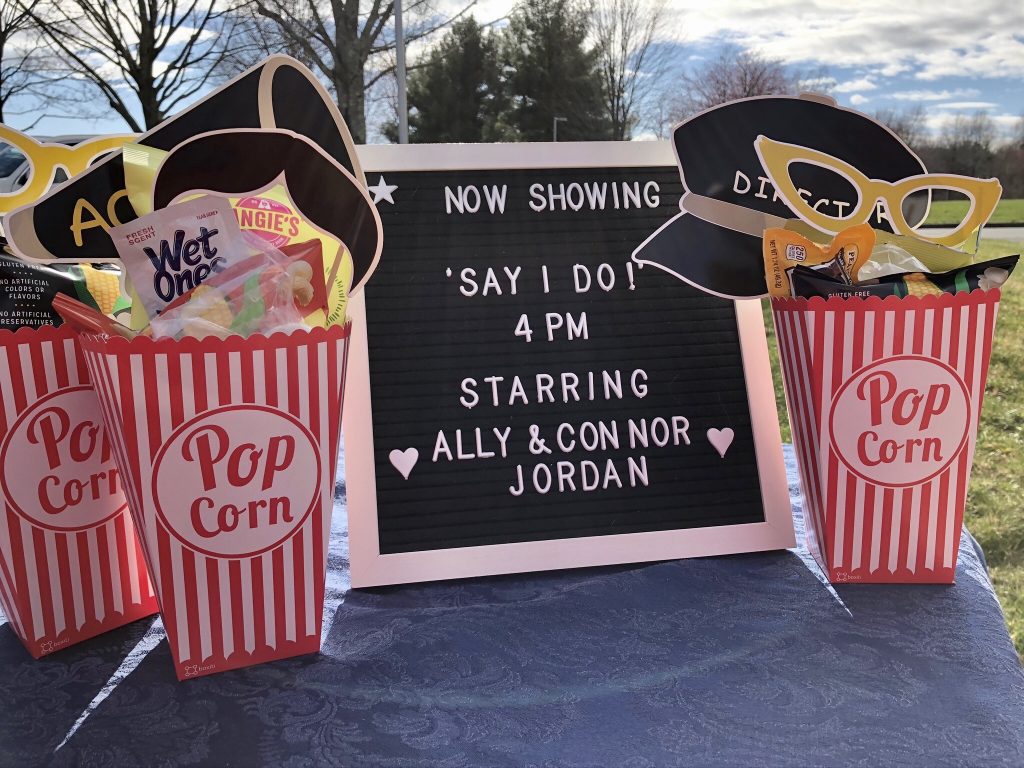 Connor and Ally Jordan had a drive-in wedding on April 4, 2020. Courtesy photo

Connor and Ally Jordan had been planning their wedding for nearly two years, and 190 guests were going to celebrate the happy occasion with them on April 4, 2020, at Farmington Gardens in Farmington, CT.

Invitations were sent and RSVPs were received, but as the day drew closer the COVID-19 pandemic arrived in the U.S., and began impacting the Northeast, and suddenly there began to be restrictions on the size of gatherings that were permitted. Plans would have to change. 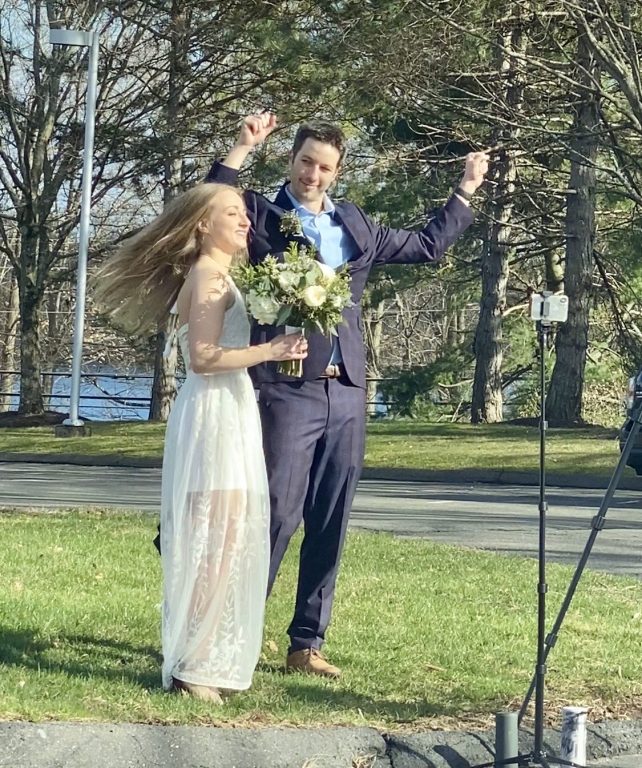 Connor and Ally Jordan of West Hartford were married at a drive-in wedding on April 4, 2020. Courtesy photo

“At first I thought, let’s do a smaller wedding, with just family and some friends,” Connor said. But as they began to consider a smaller scale event at the same location, executive orders were issued, and the size of permissible gatherings went from 50, to 10, to just five.

As the cliche goes, they needed to find a way to make lemonade out of lemons.

“We were set on the day, we liked it, so we chose to still try to get married on that day,” Ally said. But they also had to conform the social distancing and size of gathering requirements.

The Jordans, who live in West Hartford, have been been together for six years. Both are originally from Avon. Connor is a graduate of Avon High School and UConn (2014) and Ally (whose maiden name was Roach) went to Miss Porter’s and graduated from UConn in 2016. She is currently a third-year student at UConn School of Law, and Connor works (now at home) as a 401(k) consultant for Glastonbury-based USI Consulting Group.

“Ally came up with the idea that we could do a drive-in wedding, everyone could stay in their cars except my dad,” Connor said. His father, Robert – standing a proper physical distance from the couple – performed the ceremony.

“I came up with the general idea of the drive-by wedding, but after Connor and I put in almost two years planning, we were heartbroken,” Ally said. She said she just couldn’t bear the thought of organizing the details, but thanks to her amazing sister, Jen, everything came together. 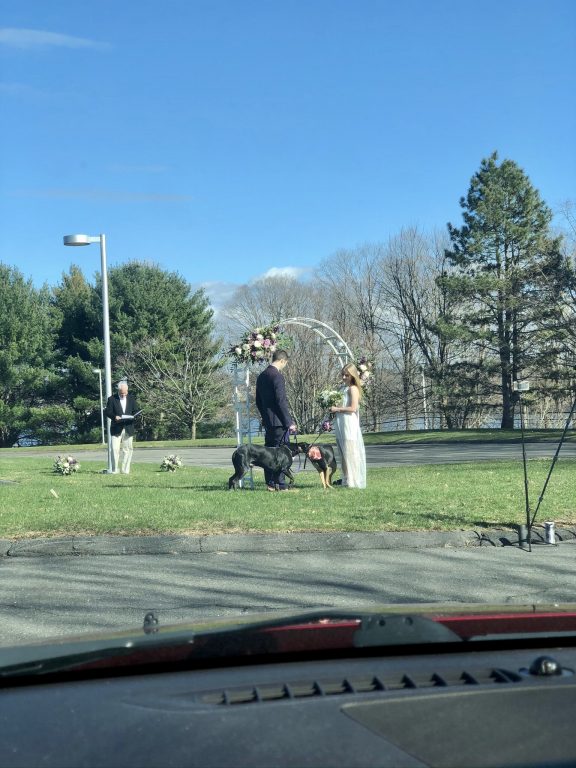 Connor and Ally Jordan of West Hartford, with their dogs by their side, were married at a drive-in wedding on April 4, 2020. Connor’s father, Robert (in background) officiated. Courtesy photo

The wedding was held on April 4, 2020, just as they planned, but it took place in a Farmington parking lot owned by a friend who gave permission for them to be on the property. Because their license was taken out in Farmington, they held the ceremony in that town. [Editor’s note: Connecticut’s mandate that a marriage license must be taken out in the town where the ceremony will be held has been temporarily suspended through one of Gov. Ned Lamont’s executive orders.]

There was a private conference call set up, that those attending could access through a passcode. They could hear the maid of honor and the best man – who were seated in their cars in the parking lot – make their speeches.

The drive-in movie theme was a hit. Ally’s sister was able to get away despite being a nurse in Boston, prepared packages of movie snacks, and even included the couple’s signature drinks that were to have been served at the reception.

In all 10 cars  – a total of about 15-20 guests – were in the parking lot listening and watching the love story unfold in front of them.

Their two dogs were able to be included in the ceremony.

The Jordans will ultimately have their formal celebration at Farmington Gardens, and Ally will wear her official wedding dress and Connor will wear his wedding suit, and the DJ and photographer they had initially hired will be there as well. They will recite their vows – actually renew their vows.

“We’re going to have the exact same wedding we planned, but it will be in October 2021,” Connor said. “We will treat it as our first wedding, because people really want to have that experience.”

“Honestly, we couldn’t have asked for a better wedding,” Ally said. “Our dogs got to be in it, and that was huge for us. We feel really lucky. We were able to focus on happy news and feel really fortunate,” she said, at a time when there is so much profound sadness.

While they were devastated when they first realized that the wedding they planned wasn’t going to happen as intended, both realized this was the only decision.

“We look at it now as if we were able to get the best of both worlds,” said Ally.

A friend created a TikTok video of the event. Connor and Ally are now happily married, and happily sharing their unique experience.

They weren’t going to take their honeymoon until August, after Ally took the bar exam, but those plans are a bit in flux now as well. The exam has been postponed from July, and they were also planning a move to Boston for their jobs later this year.

For now the couple is having a “staycation honeymoon,” enjoying different island theme nights, decorations, candles, food, at their West Hartford home near the Farmington Avenue reservoir.

“Making Lemonade” is a We-Ha.com series focused on how residents are making the best of things amid the COVID-19 pandemic. 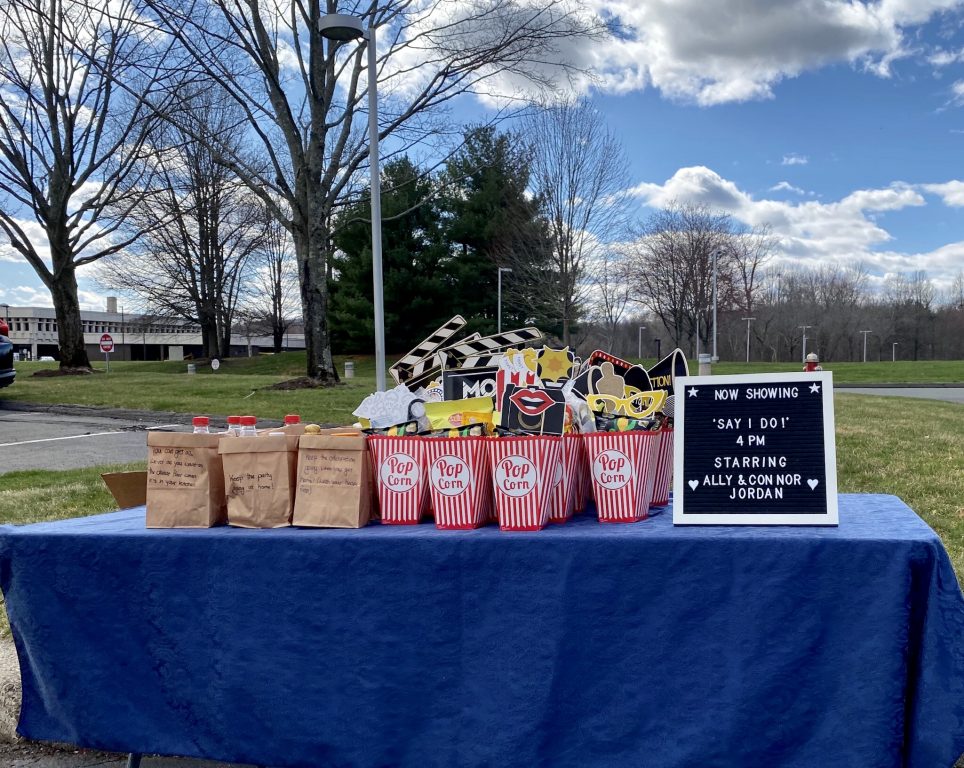 Connor and Ally Jordan had a drive-in wedding on April 4, 2020, and Ally’s sister, Jen, created movie theater packs of food and signature drinks for the occasion. Courtesy photo 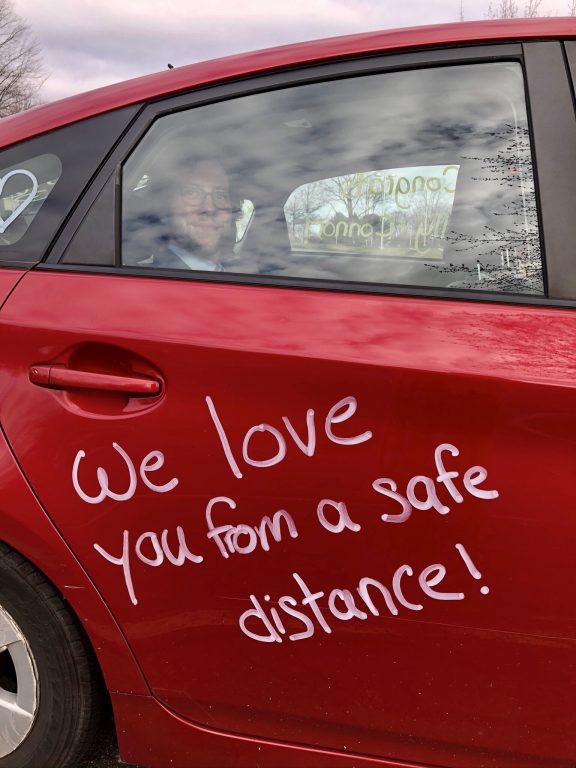 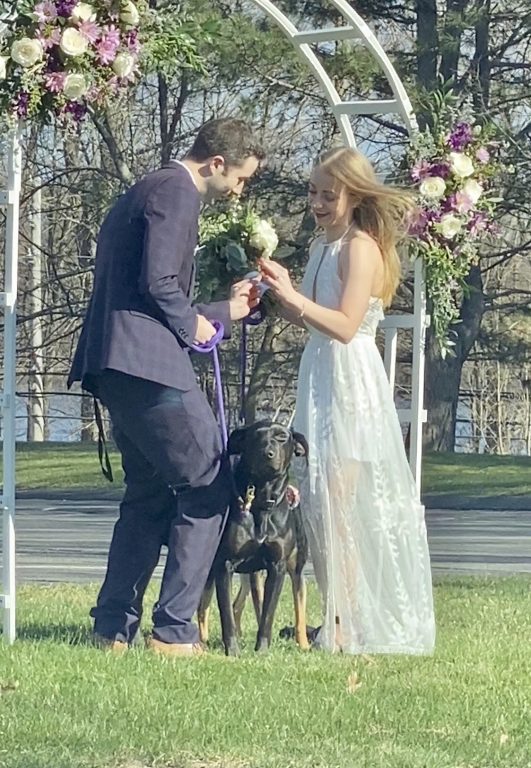