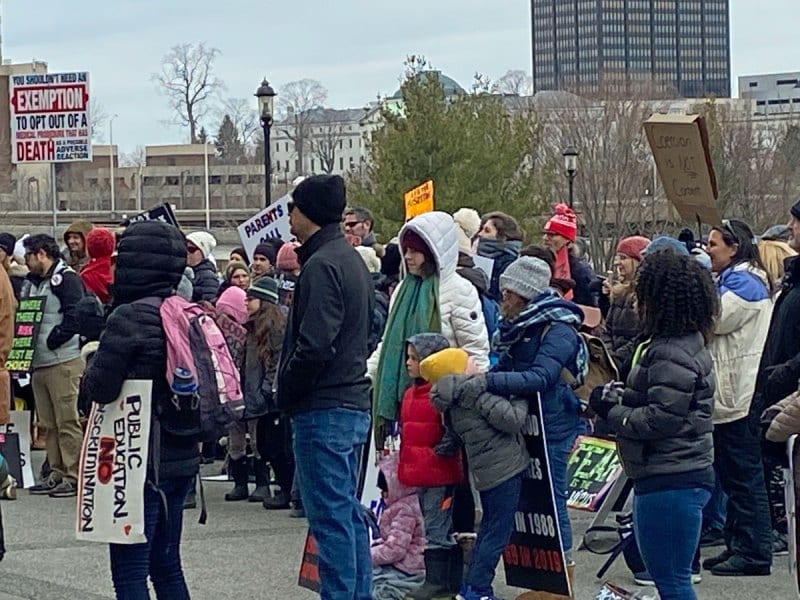 Legislative leaders are still determining which chamber will raise the proposal first for a floor vote.

Supporters of eliminating Connecticut’s religious exemption to vaccination requirements for school children say last week’s confirmed case of the measles in a Fairfield County child demonstrated the necessity of changing the law.

Lawmakers are considering bills to close an exemption to a state law, which allows parents to opt their children out of a requirement that they be vaccinated in order to attend school, public or private. The proposal is currently sitting before both chambers of the state legislature. Last month, the Public Health Committee approved two identical bills and sent a version to both the House and Senate.

On Monday, Senate President Martin Looney said legislative leaders were still discussing which chamber would raise the proposal for a floor vote first. But he said last week’s measles case, which the Public Health Department confirmed in a child who had been traveling abroad, illustrated the importance of passing the bill.

“Clearly this case of measles points out exactly the danger that these diseases still pose and that too often people become casual about it because they haven’t seen actual cases and the grave illness and harm they can cause because vaccination has been so successful over the last several decades,” Looney said.

Rep. Josh Elliot, a Hamden Democrat and proponent of the bill, said Monday he expects that the proposal will likely start in the House, sometime before the end of April. Elliot said supporters have enough votes in both chambers to pass the legislation this year, but there are disagreements over who should be grandfathered under the current exemption.

As it stands now, the bill allows students who are in seventh grade or higher to keep their existing religious exemptions and continue attending school without being vaccinated. Some lawmakers would like to see the proposal allow current students from kindergarten up keep their present exemptions. Elliot said he believes House leadership will give that change a vote on the floor.

“We will run that as an amendment. If it fails, the ask to those House members is to still vote positively for the underlying bill even if they don’t get what they want. The most important thing for everybody in both chambers is that this be successful. Whether it ends up being 7-12 or K-12, we are absolutely going to pass this bill this year,” Elliot said.

The proposal has been among the most controversial issues raised during this legislative session. A February public hearing on the bill attracted testimony from almost 2,000 people mostly in opposition to the change. The hearing was capped when the proceedings exceeded 24 hours.

In a Friday statement, LeeAnn Ducat, an opponent of the bill and member of Informed Choice CT, said the state was intentionally hyping the measles case in an effort to drum up support for removing the religious exemption.

“Except they are proving that their robust response is sufficient enough without having to remove the rights of half a million schoolchildren, and this case did not originate from a child with a religious exemption,” Ducat said. “A shameful and disingenuous attempt at creating hysteria for political gain.”

Looney said he saw the issue as a matter of public health rather than one of religious freedoms or the rights of parents.

“Children are not the possessions of their parents. They’re not goods. They’re not cattle. They are persons who have rights and the parents have an obligation to protect and take care of their children. The parents’ control is not absolute in any way. That’s why we have [the Department of Children and Families] to look into situations where there are abuse and neglect,” he said.