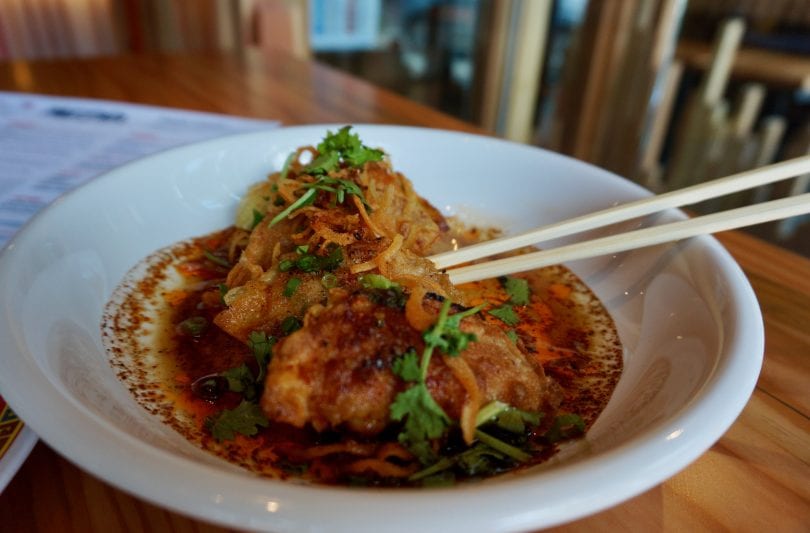 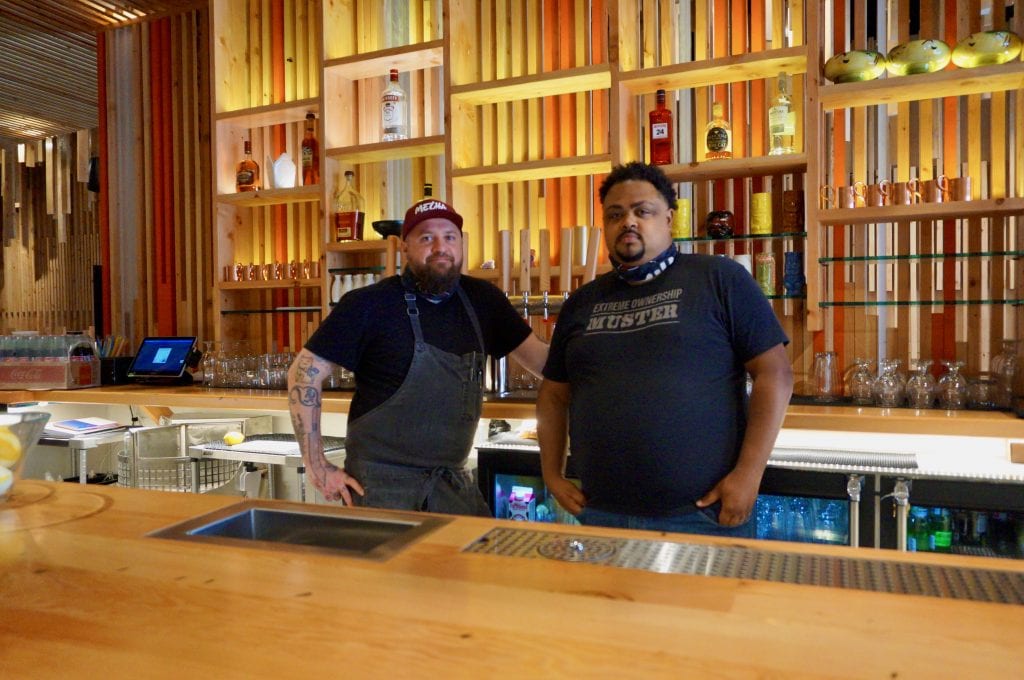 Mẹcha Noodle Bar doesn’t fit squarely into one food category, unless that category is “fun.”

When asked to describe Mẹcha in one word, chef and co-owner Brian Reilly – who goes by the title “Ramen Bushi,” – used four: “Southeast Asian comfort food,” adding that the restaurant is “heavy on Japanese and Vietnamese” dishes.

The term Mẹcha (pronounced “meh’chah) means “Mom and Pop” in Vietnamese. It’s a nod to the owners’ strong sense of family and their light-hearted sense of humor. The menu notes that technically, in Vietnamese, the words “Mẹ” and “Cha” are only used together “when you are cursing at someone.”

The restaurant features noodles, which one would expect from the name – both pho and ramen. Reilly doesn’t have a favorite, and in fact his bio on the Mẹcha website states, “I do not pick between my children, I love them all the same.”

Even though there are a variety of Asian dishes on the menu at Mẹcha, they don’t call it “fusion,” but rather the brand’s own unique take on Southeast Asian street food in their own distinct “American-Vietnamese-Japanese-Thai-Chinese-Korean-New England-Momofuku-Totto-and-Ippudo-inspired” style.

On Wednesday, July 29, the West Hartford location will become Mẹcha Noodle Bar’s fifth location, and the first in Central Connecticut. The first opened in Fairfield in 2013, and there are also restaurants in South Norwalk, New Haven, and Stamford. 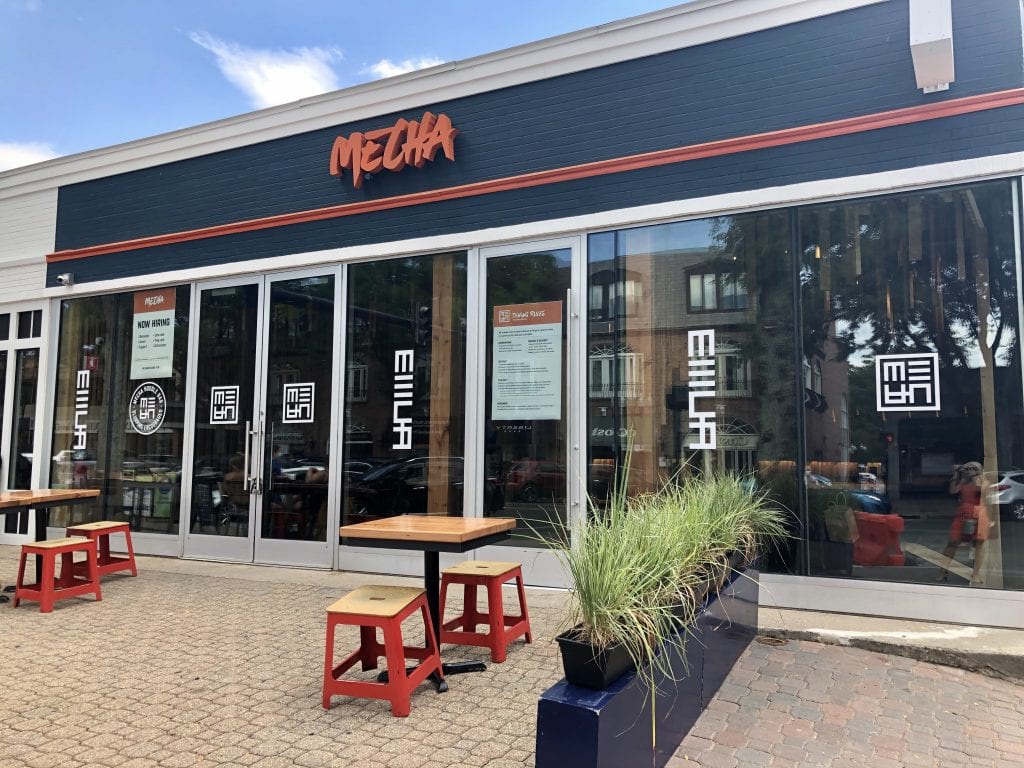 Opening a restaurant while the COVID-19 pandemic lingers is a bit challenging, but Reilly and his team, which includes General Manager Juan Reyes, are excited and optimistic. The construction managed to continue with few delays since they announced their plans last November, and the opening is not much later than expected.

“We are super happy to be here in West Hartford,” Reilly said.

“We try to build for the community, and we have wanted to be in West Hartford for a long time,” Reyes said. “This is something fun, different, exciting,” he said.

“Tomorrow we are launching a restaurant, and a new menu,” Reilly said Tuesday as he provided a tour of the space and the menu.

“Pre-COVID we had a seasonal menu that we changed four times a year,” he said, but for a few months the menu was cut back dramatically while they focused on takeout. It’s been expanding as Connecticut has reopened, and the four summer specials that are on the West Hartford menu will be available in all locations beginning July 29. 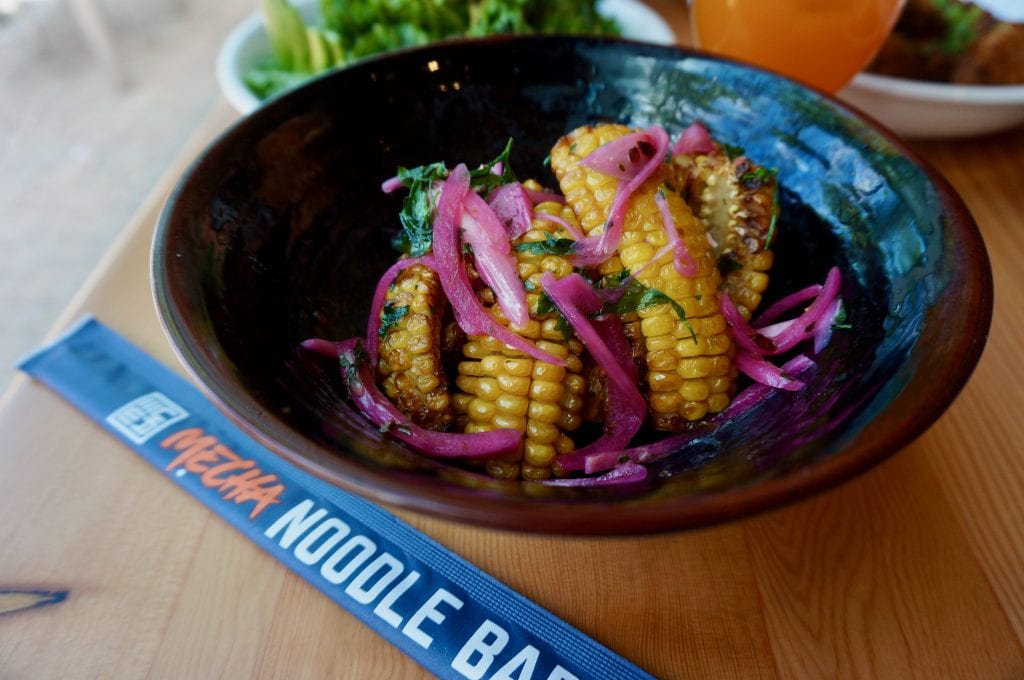 “Shrimp Roll Bao” ($11) is Mẹcha’s version of a lobster roll, and is served on a toasted bao bun with yuzu kewpie (kewpie is a Japanese mayonaise), and black sesame, and tiny potato chips for a deliciously satisfying crunch. 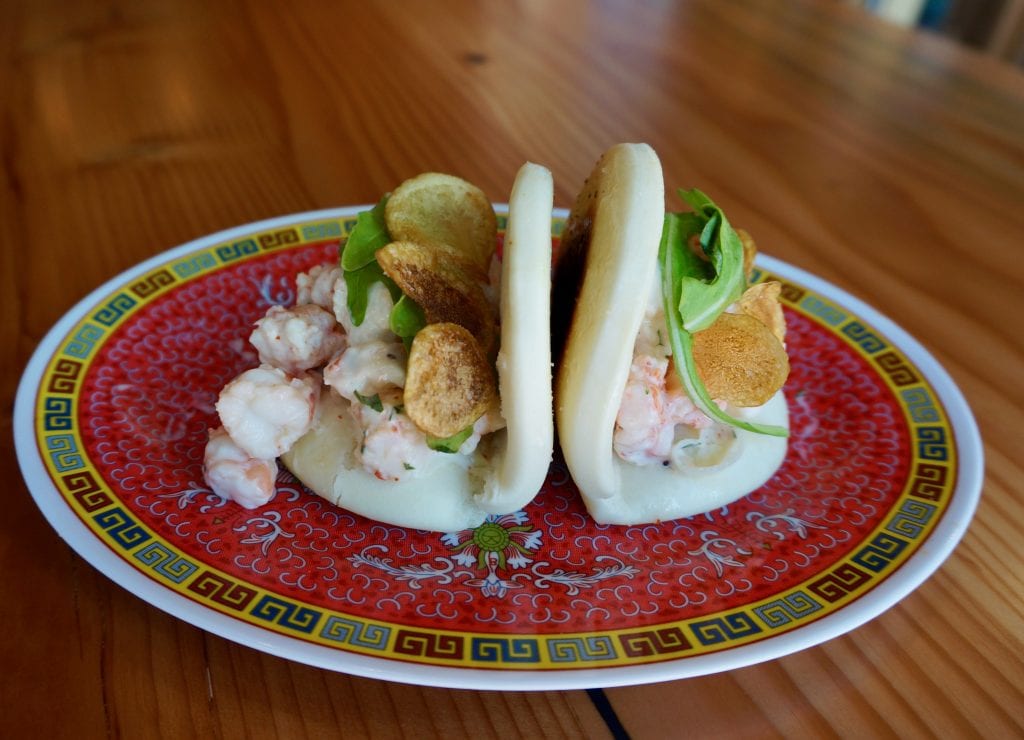 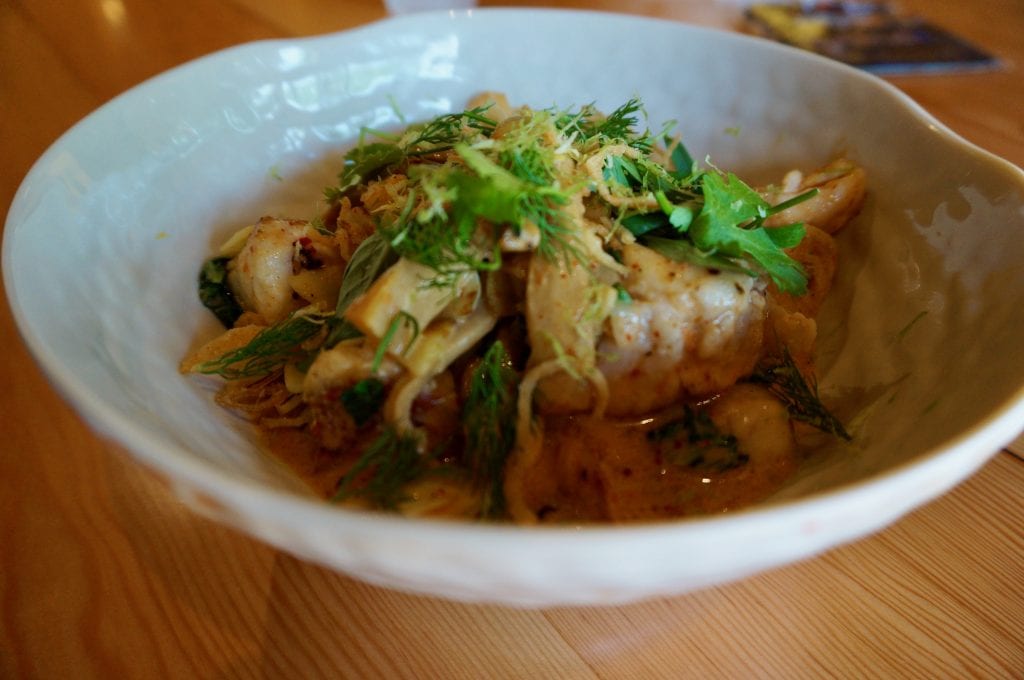 As the menu continues to expand, there will be items unique to each restaurant that will change regularly.

Reilly said one of his favorite dishes is the KFC – Korean fried chicken on a steamed bao bun ($7). It’s served with gochujang, pickled daikon-carrots, and kewpie, and Reilly said it’s as good cold as it is hot.

The pho dishes ($11-$15) use beef and chicken broth as a base, along with cilantro, scallions, and onions. Each dish is listed with suggested add-ons ($1-$3). The “Pho King” features fermented short ribs that are “fit for a king,” with egg, brisket, and marrow oil as recommended add-ons. 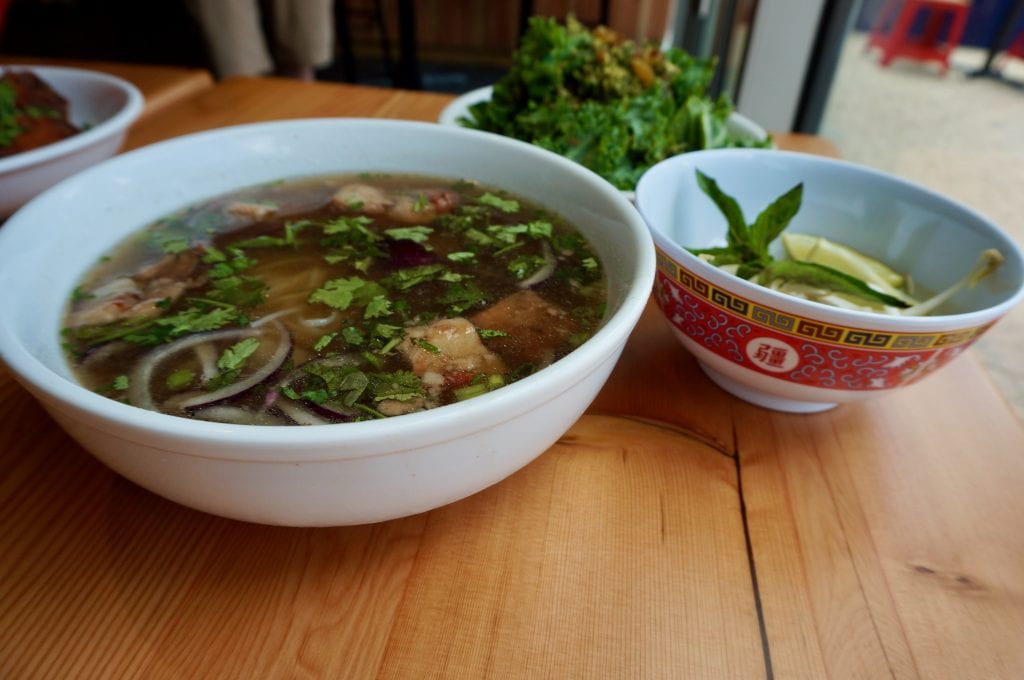 Since the pho uses a meat-based broth it’s neither vegetarian nor vegan, but the rice noodles make it gluten free.

There are four basic types of ramen ($12.50-$14.50), including “Tonkotsu 2.0” which is made from a base of hakata style 24-hour pork broth (it was already bubbling on the stove Tuesday, in preparation for Wednesday’s opening), with chashu, corn, butter, scallions, and tamago. While the ramen noodles contain wheat, there are vegetarian and vegan ramen options, and a selection of add-ons are suggested as well. 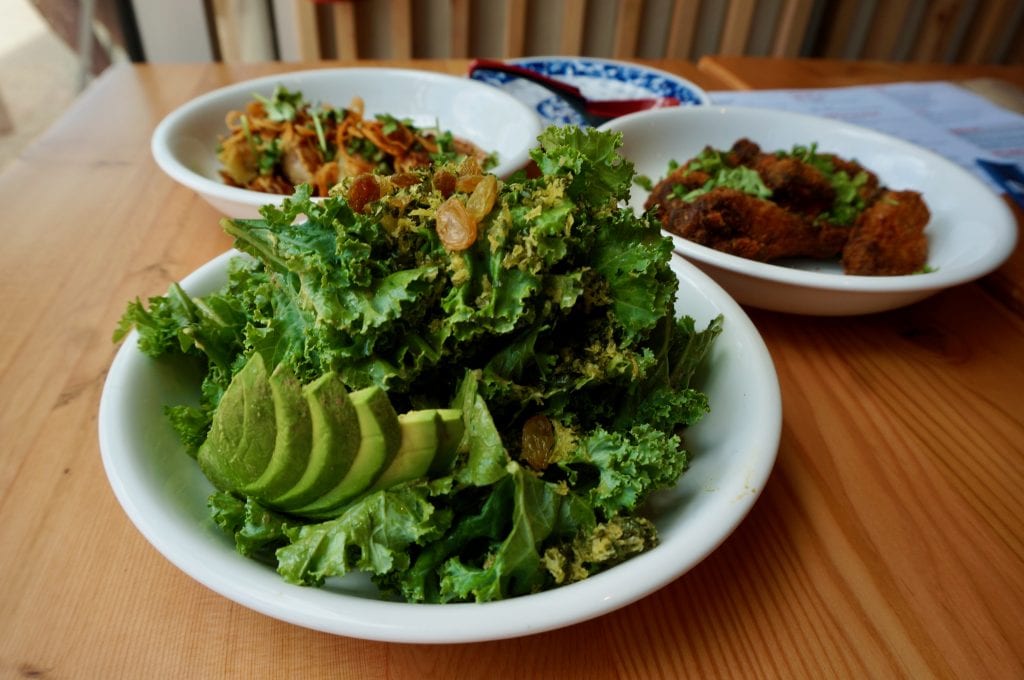 Mẹcha Noodle Bar also has a full bar, with not only wine, beer, and sake, but a selection of creative cocktails like the “Boom Shaka Laka” (Jamaican rum, passion fruit, banana, aperol, cyan amaro, citrus juice, and five spices).

“We have a pretty intense bar program,” Reilly said, with roots in some of the high-end New York City cocktail bars.

In addition to soft drinks and coffee, non-alcoholic beverages include bubble teas. 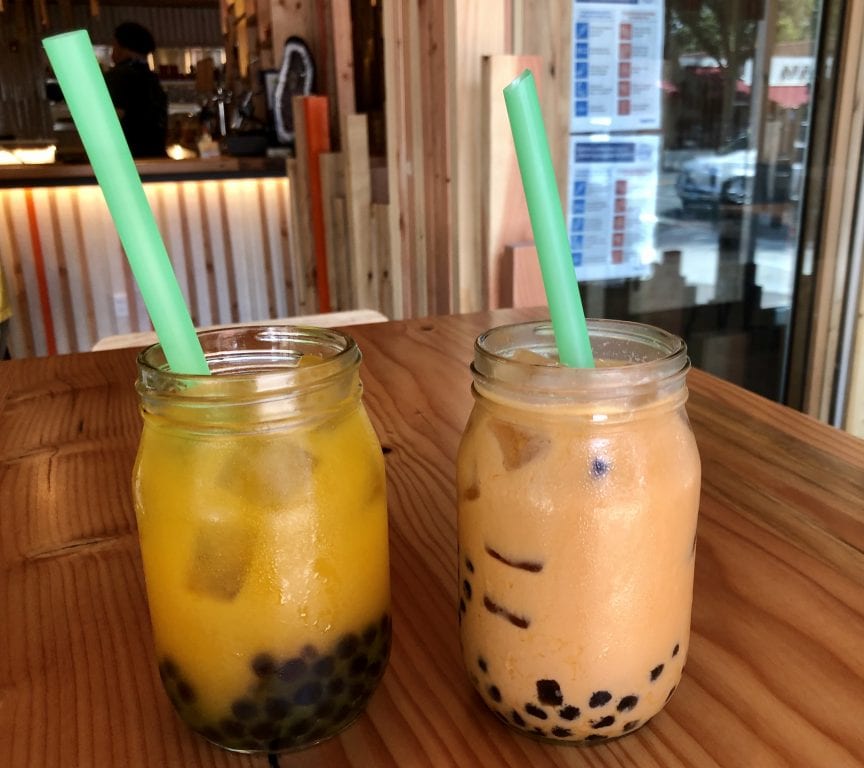 A selection of bubble teas at Mẹcha Noodle Bar include Temple of the Sun (left), a blend of African nectar tea, pineapple, and passionfruit. It can be spiked with a tequila and mezcal blend. Photo credit: Ronni Newton

“We use real tea,” Reyes said, steeped with natural flavorings.

There’s a traditional Thai iced tea, “Temple of the Sun” (African nectar tea, pineapple, and passionfruit), and Mango Lassi Boba (mango, lime leaf, local cream, and lime. There are suggestions for those who would like the bubbles teas as spiked versions.

COVID-19 restrictions has the inside seating capped at 45 to ensure 6-foot distancing between all seats, some of which are at the long wooden bar that’s the centerpiece of the restaurant. There are also eight seats on the patio, and tables and chairs on order for outdoor seating in the back as well. Full capacity is 116 inside, Reilly said, but no one knows when restaurants will be permitted to return to 100% capacity. 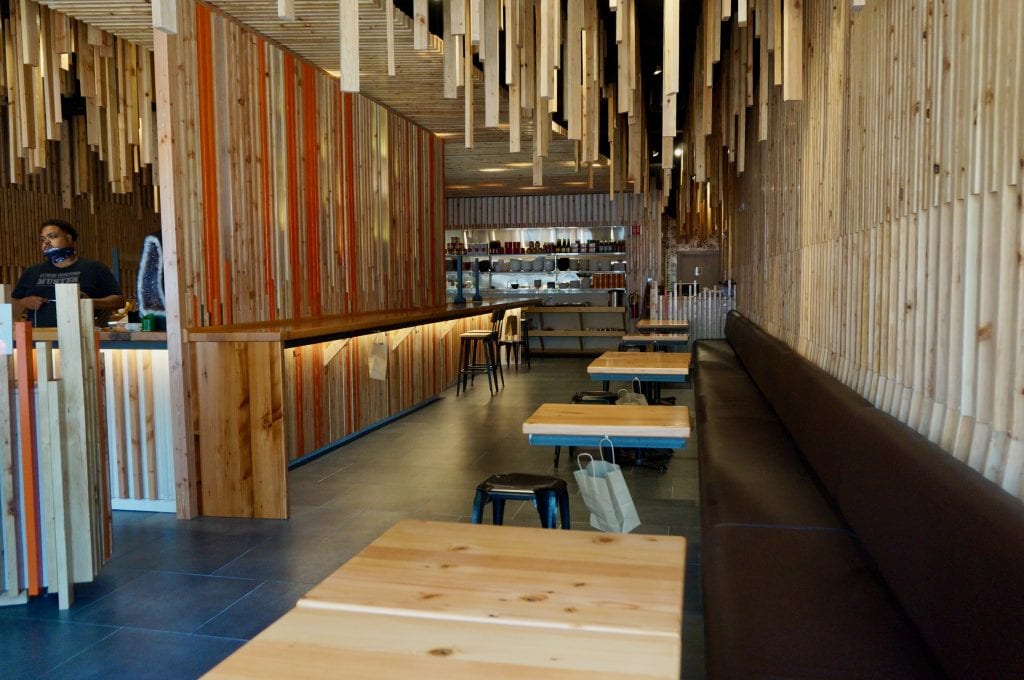 Mẹcha Noodle Bar will be open seven days a week for lunch and dinner, noon-9 p.m., “during COVID,” Reyes said. The hours may be expanded if demand is there. The restaurant currently has 25-30 employees in West Hartford, but if the hours and capacity expand the number of jobs will grow, too.

The existing Mẹcha locations have become known for their happy hours, which were suspended during COVID.

“Yes, happy hour is coming back,” Reilly said. It will begin Aug. 5 at all locations, with one beer or wine and two cocktail options, as well as two baos and a “bowl of the day.”

Mẹcha Noodle Bar also has a commitment to giving back to the community, and the business includes a nonprofit arm, Eat Justice.

Eat Justice has raised funds for breast cancer awareness, Live Free, and most recently for its employee relief fund.

For more information, visit the website, or follow on Facebook or Instagram (@eatramen). Mẹcha Noodle Bar is located at 975 Farmington Ave. (the western portion of the former Toy Chest space, right next to the newly-opened Arethusa Farm Dairy), and can be reached at 203-691-9671. 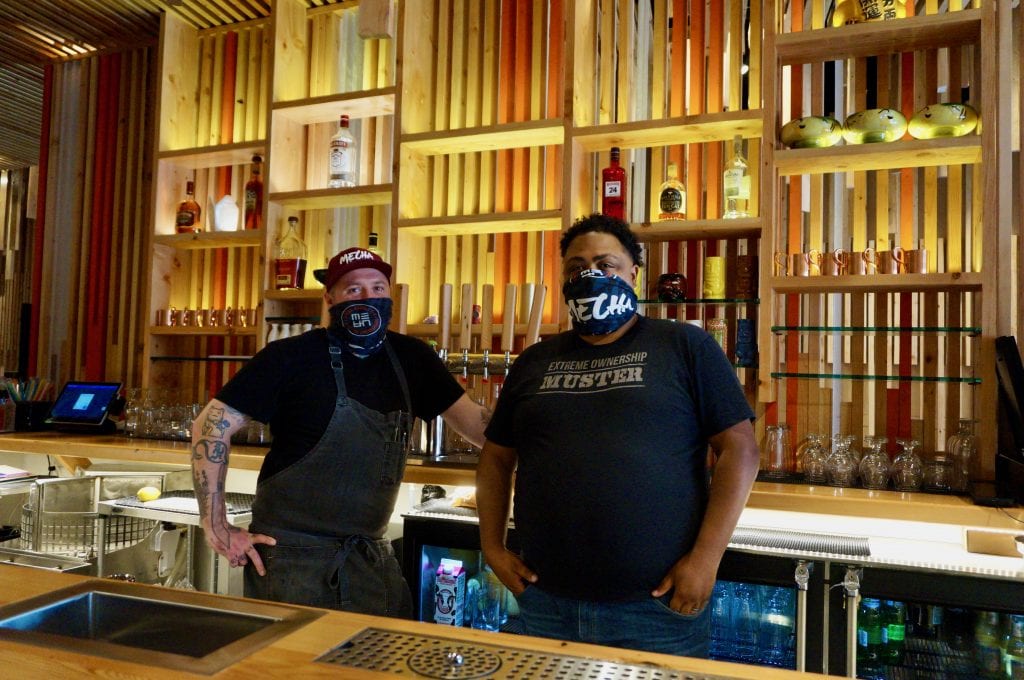 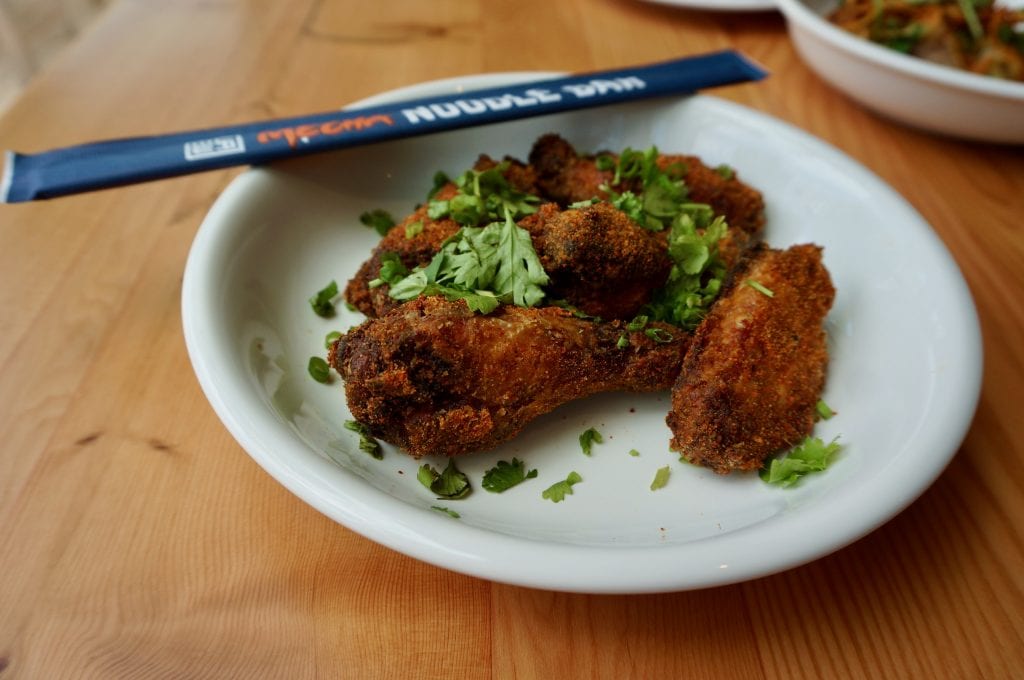 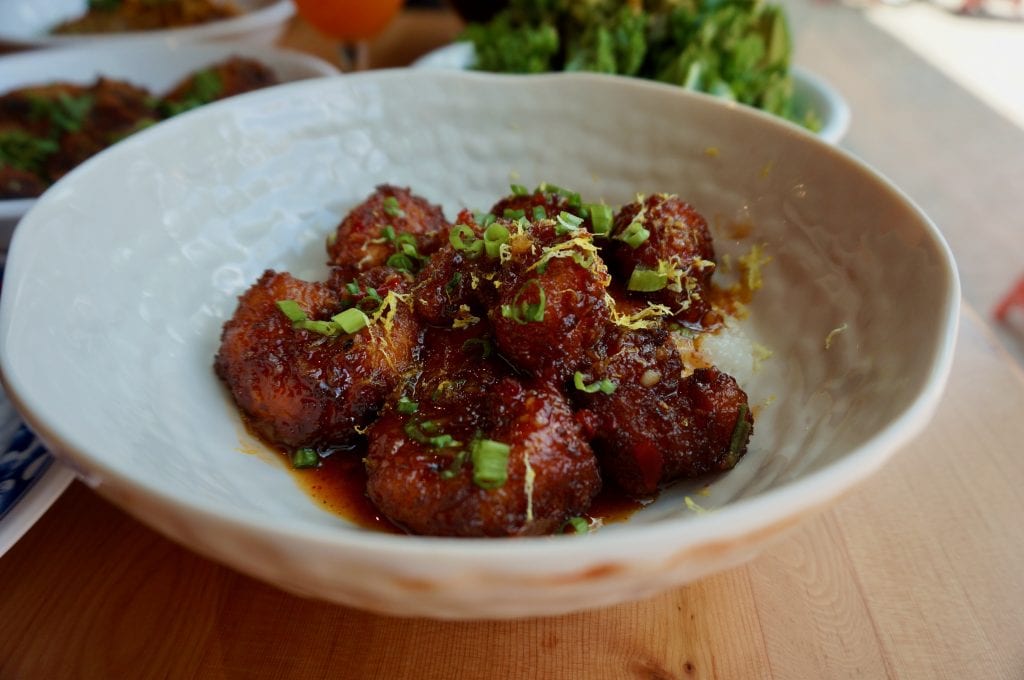 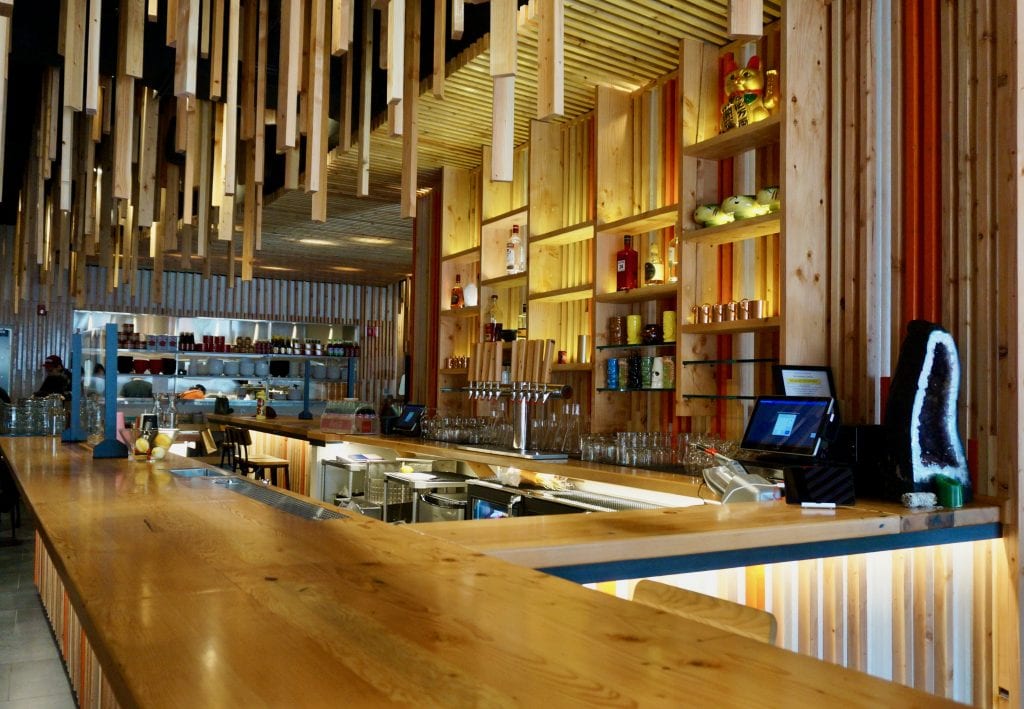 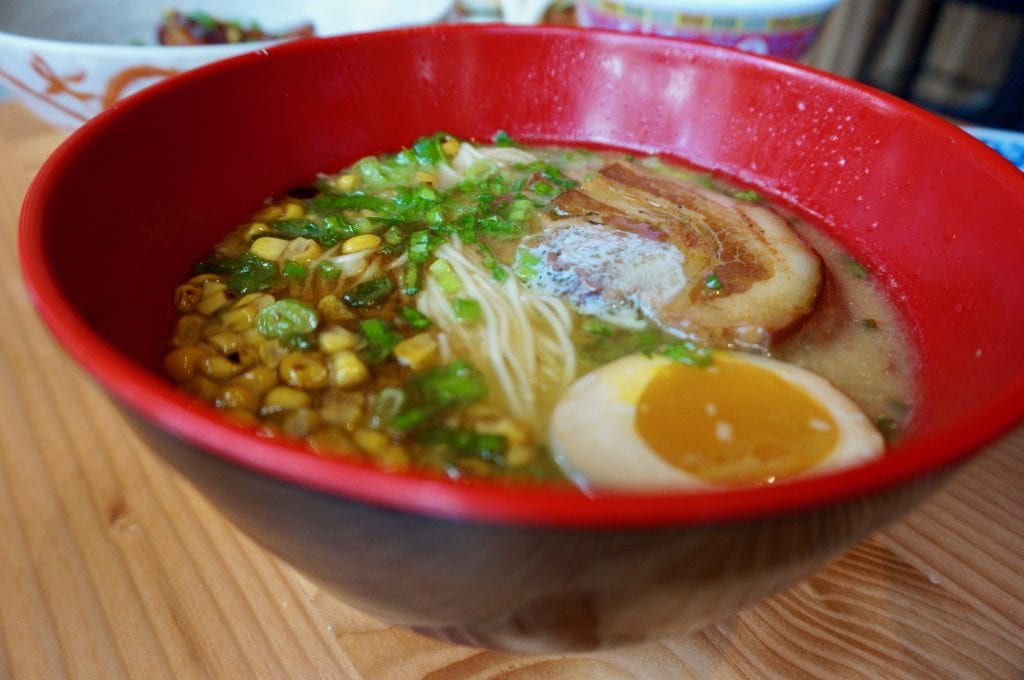 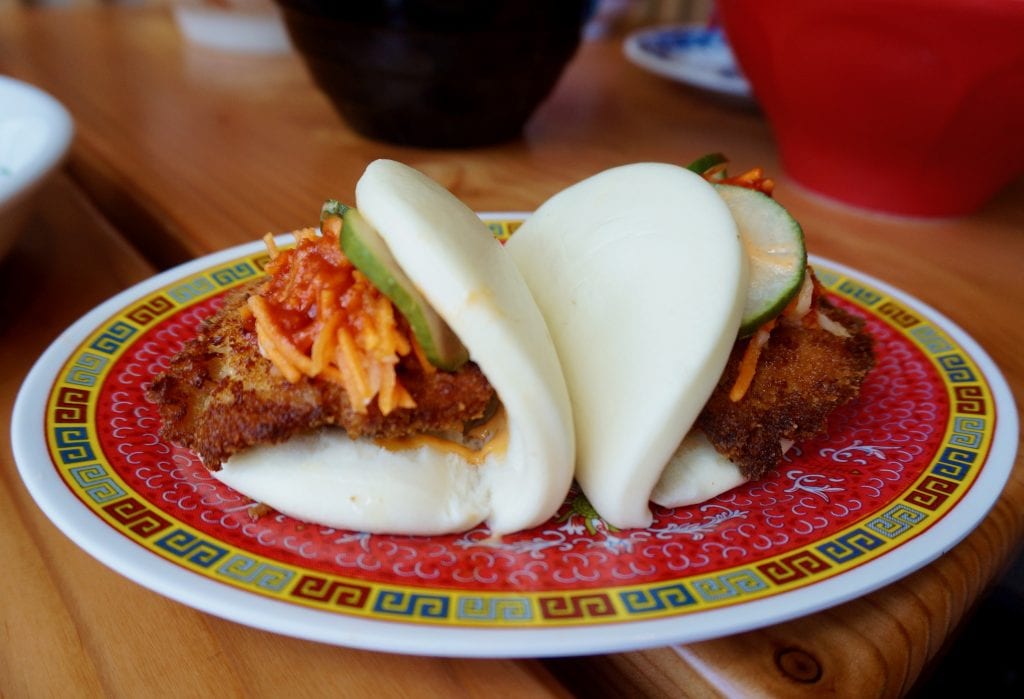 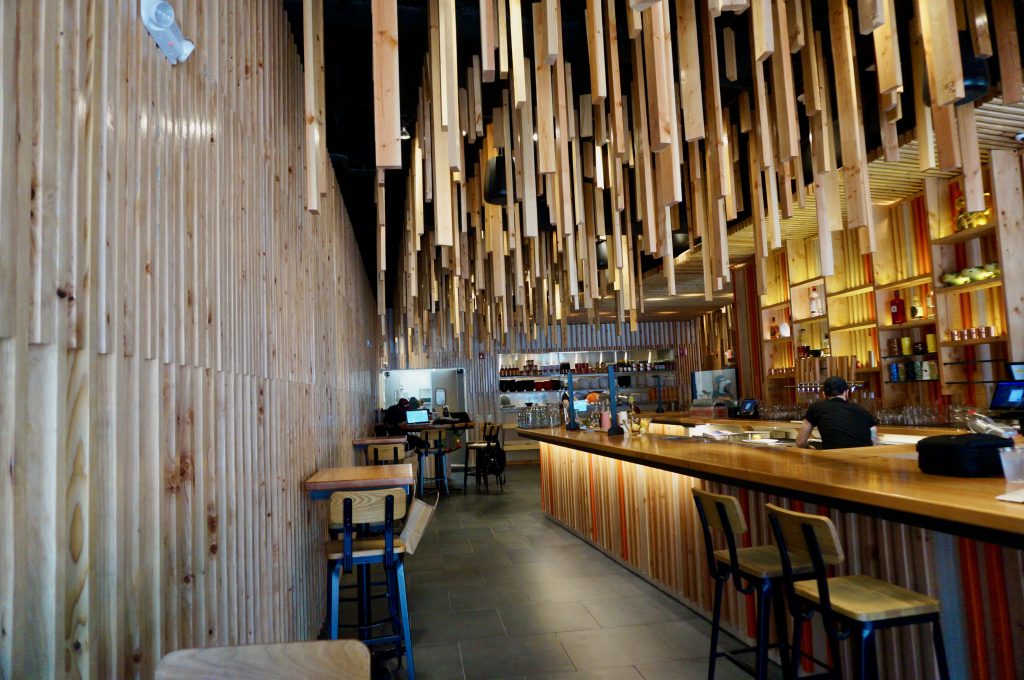 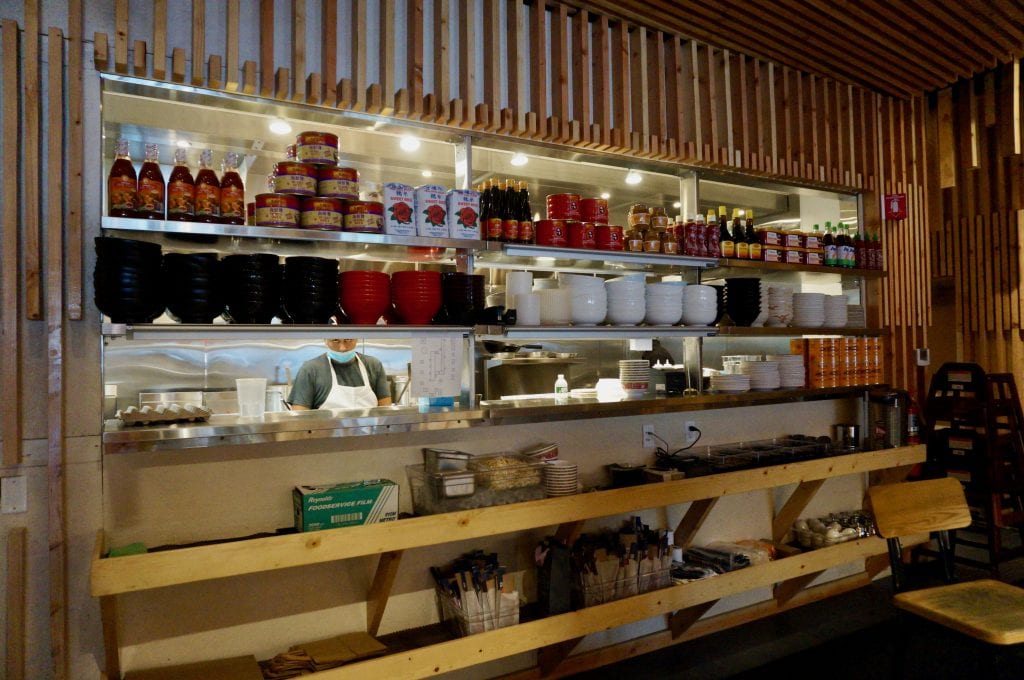 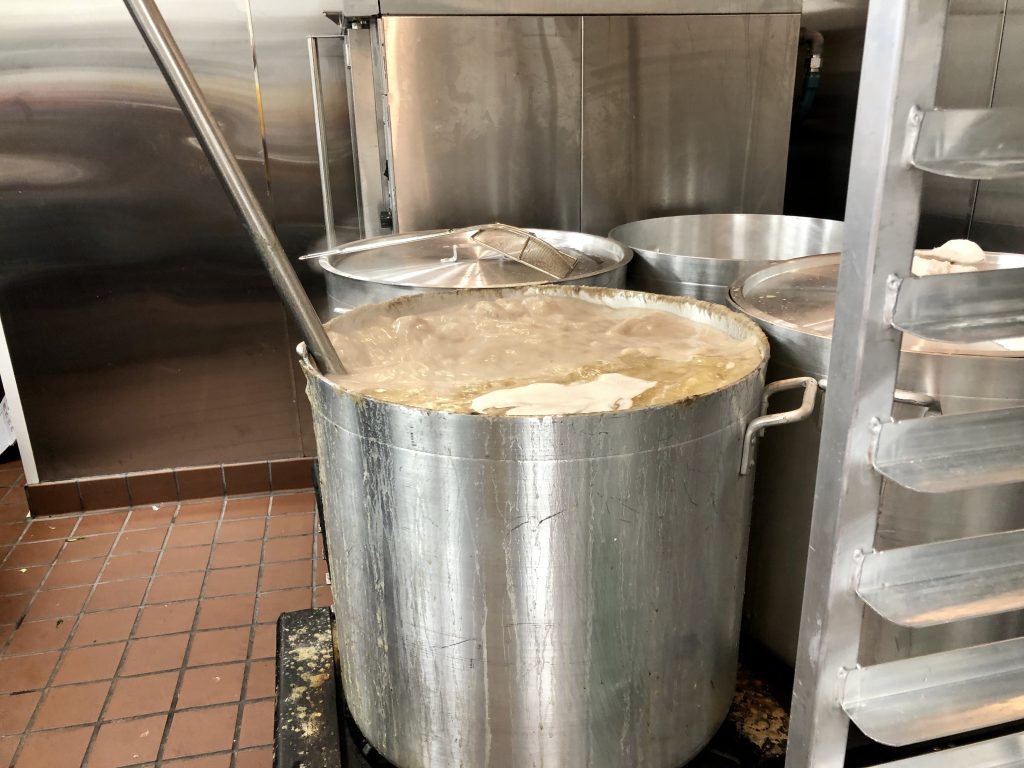