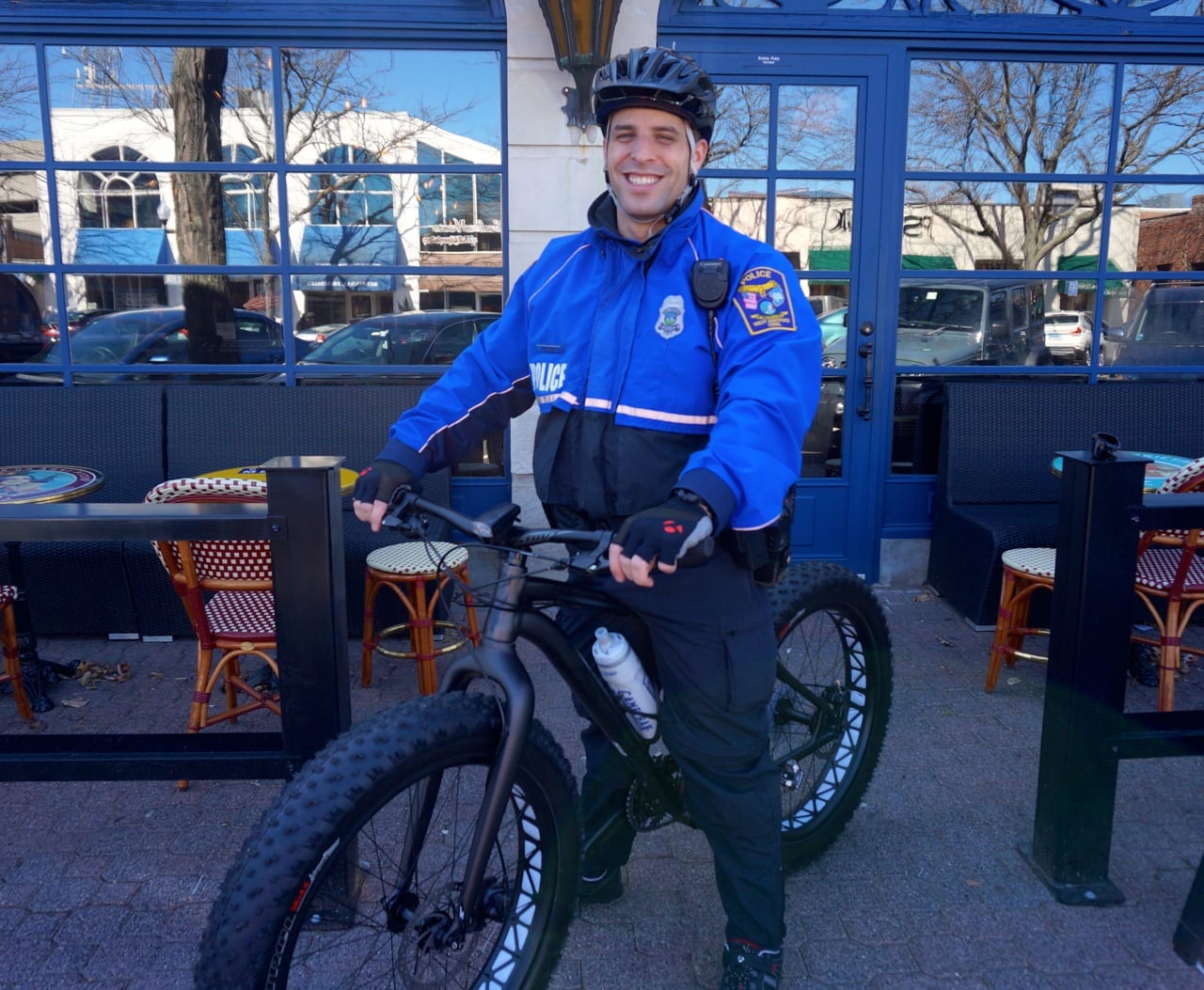 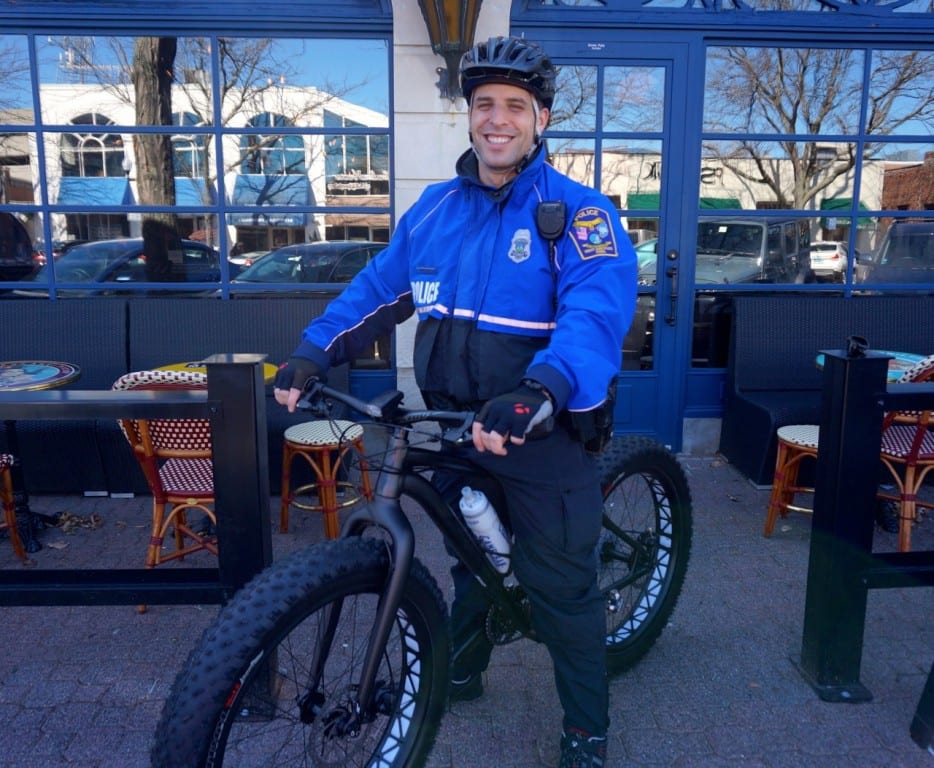 Off. John Cardone doesn’t just walk his new beat around West Hartford Center – he cruises it aboard a Specialized “FatBoy” bicycle.

Cardone, who has been a West Hartford Police officer for more than 10 years, took over the Center beat position on March 1 from Brian Gallagher, who had covered the territory for seven years. Cardone is a field training officer, and also previously worked in the traffic division.

“My big thing is going out to talk to people,” Cardone said. He has spent the past month meeting the business owners in the Center and Blue Back Square, and also stopping to to chat with members of the public.

Primary roles of the beat officer, Cardone said, are visibility and deterrence. Businesses, especially jewelry stores and other retail establishments with valuable merchandise, like knowing that a police officer is never far away, he said.

Having a regular officer on the beat sends the message: “I’m here, we’re out there,” Cardone said. He goes out of his way to be friendly to members of the public, but also provides that element of safety. It’s similar in some ways to the role of the SROs at the schools, he said.

Cardone hands out his cards to business owners, and lets them know that he’s the first point of contact. Anyone can email him directly with non-emergency questions.

The FatBoy bike is a great asset, said Cardone, who got his bike certification right before he applied for the Center beat position.

“It’s a great conversation starter,” said Cardone. “People love to talk about it, the kids love it,” he said. The bike, with tires that are nearly five inches wide, is really made for the sand but it provides for a soft ride around town and Cardone said it can even go up and down the stairs.

As Cardone shows off the bike’s features, at least three people stop to ask about it.

He figures he logs at least 10 miles a day riding laps around his territory, which extends roughly east to west from Trout Brook Drive to Walden and north to south from Brace Road to Pelham. He sometimes patrols the side streets just outside of the territory as well.

Cardone also rides through the parking garages in Blue Back Square, and makes several stops a day on the roof of the Isham Garage where he said kids sometimes try to hang out.

There are two beat officers who work in West Hartford Center. Cardone splits his shifts with Off. Rich Gesualdi. They work either 8 a.m. – 4 p.m. or 2:30 – 10:30 p.m. The overlap allows provides an opportunity to update each other on what has been happening during the day and ensures that an investigation doesn’t stop with the shift.

The evening shift is definitely different from the day shift. Cardone said that because of his past assignments, he’s very familiar with the bar scene. “I’ve got a good knack for knowing where things are going to happen,” he said.

The beat officers don’t get involved with enforcement of the metered parking in the Center and Blue Back, but they do help enforce the two-hour parking zones as well as any illegal parking situations.

“It’s been really good so far,” said Cardone of his new assignment. “I’ve done a lot of patrolling, getting to know the nooks and crannies of the territory. I just found a new alley today,” Cardone said. 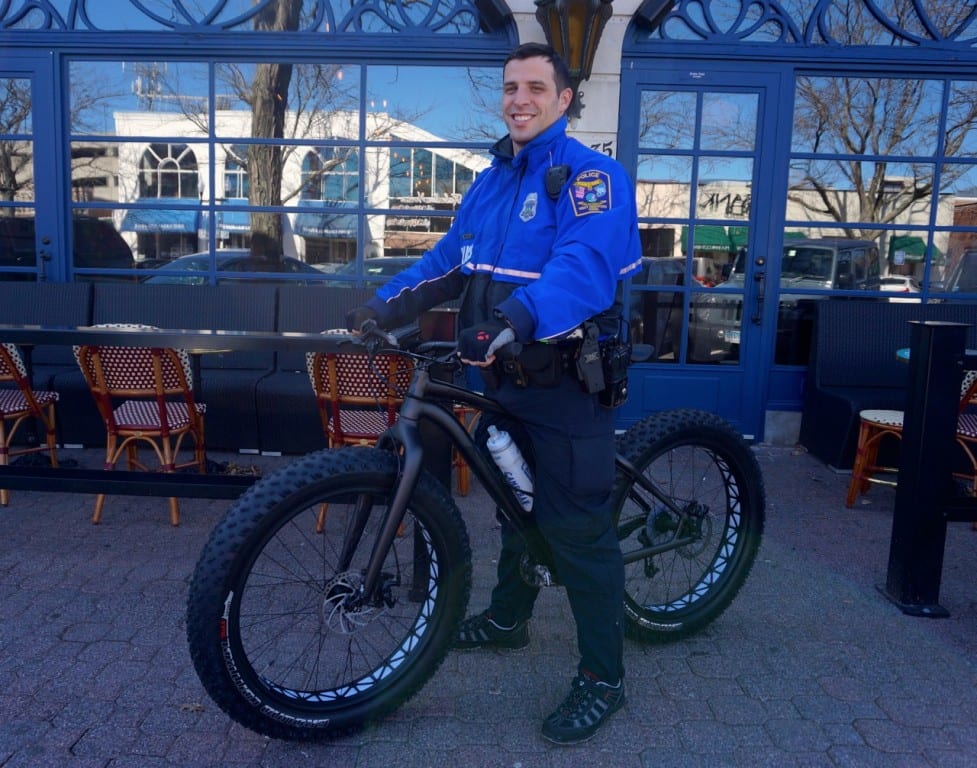