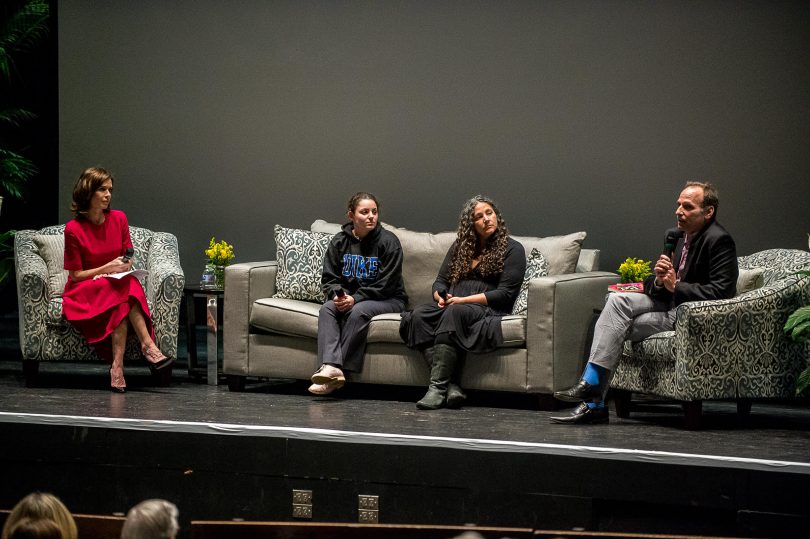 Elizabeth Vargas, Sophie Riegel, and Laurie Santos led a conversation about mental illness on Thursday at Kingswood Oxford School in West Hartford, sharing their own stories about coping with mental illness and the stigma surrounding it, as well as how to lead a lifestyle of self-care and gratitude.

The event was hosted by Tara’s Closet, a program of Jewish Family Services, whose mission is to combat the stigma surrounding mental illness. This year’s event, titled “Are You Happy?” was moderated by award-winning news anchor Elizabeth Vargas, and emphasized that actively making an effort to be happy can combat stress and anxiety.

A video created by Jewish Family Services and Tara’s Closet kicked off the night, featuring messages from Barbara Roth, founder of Tara’s Closet, and Evan Fox, M.D. of Psychosomatic Medicine at Hartford Hospital. Bob Marley’s “Don’t Worry, Be Happy” played in the background as West Hartford residents as well as co-chairs of Tara’s Closet shared what happiness meant to them. Fox summed it up best: “Imagine choosing to be happy- that’s a privilege.”

Vargas was the first speaker of the night. After introducing her career as a news journalist and the successes that came with it, she shared that she was forced to publicly admit that she was an alcoholic in 2013. However, her suffering did not start there.

Delving into her struggles with anxiety as a child, Vargas described growing up with worry and fear “as the background music to her life” until the age of 6, when “fear moved out and panic moved in” after her dad was deployed to Vietnam, and daily panic attacks consumed her.

Vargas said she did not start drinking until after college, when it became part of the culture for news anchors to grab a drink after work. At first, drinking acted as a solace for her anxious thoughts and feelings, but soon it began fueling her anxiety instead.

Looking back on her history with mental illness, Vargas felt like she was always about to drown, her face staying just above the water. Now, she has finally “found the side of the pool.”

Vargas said she waited years to ask for help, a result of the deep shame that she felt she “had to hide no matter what” and the incredibly strong link between alcoholism and anxiety, which is why it is so important to ask for help when you need it.

Throughout the night, each speaker touched on this sentiment, or the idea that with the amount of stigma that exists surrounding mental illness, everyone suffering feels like they are suffering alone.

Vargas said she is doing well now, and leans on peers for support when needed. She is open about her mental illness, and wrote a book, “Between Breaths: A Memoir of Panic and Addiction,” from which “every single day, without exaggeration” she has heard from someone who’s life she touched with her words. Vargas reminded the audience that you are never alone, and “right here is exactly where you are supposed to be.”

Riegel, the 18-year-old author of “Don’t Tell Me to Relax” and president of the Jewish mental health advocacy organization “Here.Now.,” spoke about her own journey with mental illness and stigma. She said her life has been affected by four different types of anxiety disorders: Obsessive Compulsive Disorder, Trichotillomania, Generalized Anxiety Disorder, and Panic Disorder, but this has not stopped her from accomplishing the long list of amazing things she has done.

As Riegel said, “it’s possible to have successes and deal with mental illnesses at the same time.” She demonstrated just that in her speech.

With wit and humor, Riegel spoke about what it was like to have daily panic attacks and to be bullied by classmates in middle school who had no idea what she was really going through. She started attending therapy and eventually stood up to her bullies, telling her story. She discussed medication and how much of a difference it can make when you have the right prescription.

Before starting anxiety medication, Riegel was “scared it would make her someone she wasn’t.” However, now that she has settled into a medication that is working for her for the time being, she loves when supporters ask her how she’s doing, and she can respond with “I’m good” and actually mean it.

Instead of letting the feeling of “living in her own prison” prevent her from doing what she is passionate about, Riegel reiterated how important it is to know you aren’t alone, and to not be afraid of asking for help. She stated that the best way to end the stigma around mental illness is to talk about it and educate others.

In the conversation at the event, an audience member asked Riegel how she was able to be so successful through all of the pain. She responded eloquently: “Anything you throw at me, I’ll be able to handle it because I’ve been through the worst already.”

Last up to the podium, Santos, psychology professor of Yale University’s most popular class ever “Psychology and the Good Life,” spoke to the audience about the mental health crisis that college students around the world are currently experiencing. She covered a list of five simple things we should be doing every day to increase wellness.

First, she pointed out that “our minds lie to us about what makes us happy,” meaning that we are tricked into thinking things like money, grades, and materialistic items are what bring us happiness, when in reality materialism is strongly linked to unhappiness.

Second, we need to “make time for social connections.” Whether it is spending time with family and friends or chatting with the stranger next to you on the bus, Santos explained that something a simple as talking and laughing, even for thirty seconds, can brighten your mood.

The third tip she gave was that “being in the present moment is the happiest way to be.” This can be achieved by really savoring each moment, and Santos recommended implementing the practice of meditation into your day-to-day.

Fourth, she stressed that “healthy practices matter more than we expect.” We can’t be truly happy if basic things like sleep, exercise, and eating well are compromised, she said.

Last but not least, Santos reminded audience members to “make time for gratitude every day,” something that Vargas also touched on.

The night ended with a more casual conversation moderated by the three speakers and Fox. Audience members were encouraged to ask questions, and many issues were addressed including more on stigma, the impact of screen time on stress and anxiety, current legislation regarding mental health and wellness, and how to help a friend struggling with mental illness that comes to you for support.

In response to the latter, each speaker could not stress enough how important is it to just be there for someone coming to you for help. Instead of telling them what to do, ask what you can do for them. Check up on the people close to you from time to time, especially if they aren’t acting like themselves, but even if they seem fine.

As Dr. Fox said, “caring is a courageous thing,” and mindfulness, or pausing before you speak and thinking about what you’re going to say, is key.

Each guest was given a smiley-face cookie on their way out, and Santos encouraged them to enjoy it wholeheartedly and without distraction – being present is the gateway to happiness.