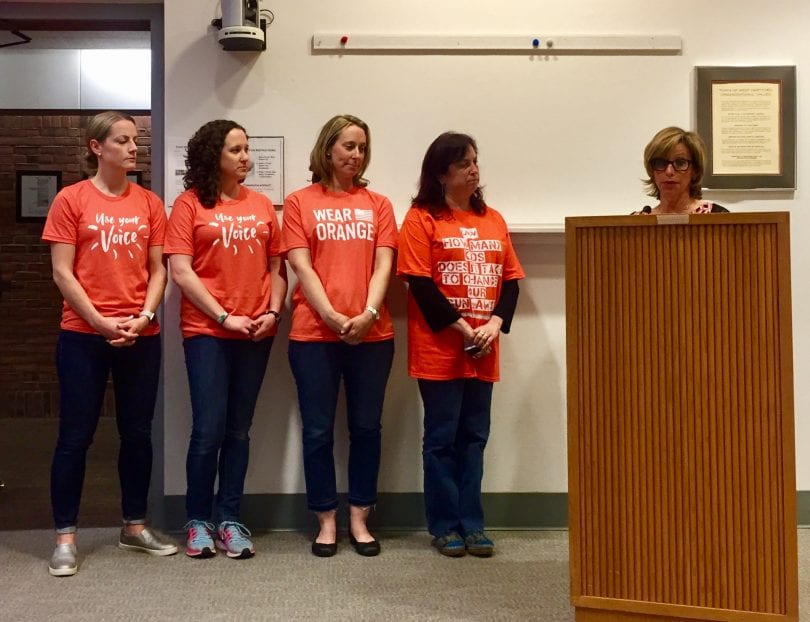 The streets and schools of West Hartford may look like a scene from Orange is the New Black this Saturday as members and supporters of Moms Demand Action participate in the first ever Wear Orange Walk.

Moms Demand Action is a non-profit organization that promotes common sense gun legislation, and this walk is meant to commemorate Wear Orange Day. The walk will start at Norfeldt Elementary School at 8 a.m., and participants will be walking to all 16 public schools in West Hartford. The walk is meant to raise money and awareness for gun violence prevention.

Katie McCarthy, one of the organizers of the walk, explained to we-ha.com the significance of the color orange being associated with this day.

“This week would’ve been the 21st birthday of a girl named Hadiya Pendleton who was a victim of gun violence and was killed when she was 15 years old,” said McCarthy, “Two weeks prior she performed at former President Obama’s second inauguration, and her friends and family chose orange as a color to show awareness mainly since hunters wear orange as a way to alert people around them, so they kind of flipped that concept on its head.”

According to McCarthy, this coming weekend has become a very big weekend for gun violence prevention. “It’s really become a combination of all different agencies such as Connecticut Against Gun Violence, Sandy Hook Promise, and others,” said McCarthy.

The idea for the walk originated from another active member of Moms Demand Action, Nicole Osier, who was trying to think of a way to raise awareness about gun violence prevention.

“Every school shooting has been like a punch to the chest, especially since I have children of my own, and I can’t just sit around and watch something on TV,” said Osier. “I wanted to find some positive action I could take to make a change.”

McCarthy also has children in the West Hartford school system, and she also cited this connection as part of the reason she got involved in Moms Demand Action. “This past December was the five-year anniversary of the Sandy Hook shooting, and that especially resonated with me since this year my son is in first grade,” said McCarthy. “This is not something I imagined I would be involved in but I felt called to action.”

According to both McCarthy and Osier, the response for the walk has been pretty strong. “I thought it was just going to be a grassroots event, but the response and support has been overwhelming,” said Osier.

As of Wednesday, about 50 to 60 people had already signed up for the walk, said Osier. McCarthy added that she is hopeful this will become an annual event.

Moms Demand Action also advocates for a variety of different initiatives, such as mobilizing voters to go out and vote on gun control legislation, educating people on the importance of locking up their own guns, especially those with children, and more.

Osier asked that anyone interested in the walk register at the link provided on this Facebook event page. This will help participants stay updated on all the need-to-know information for Saturday’s walk.