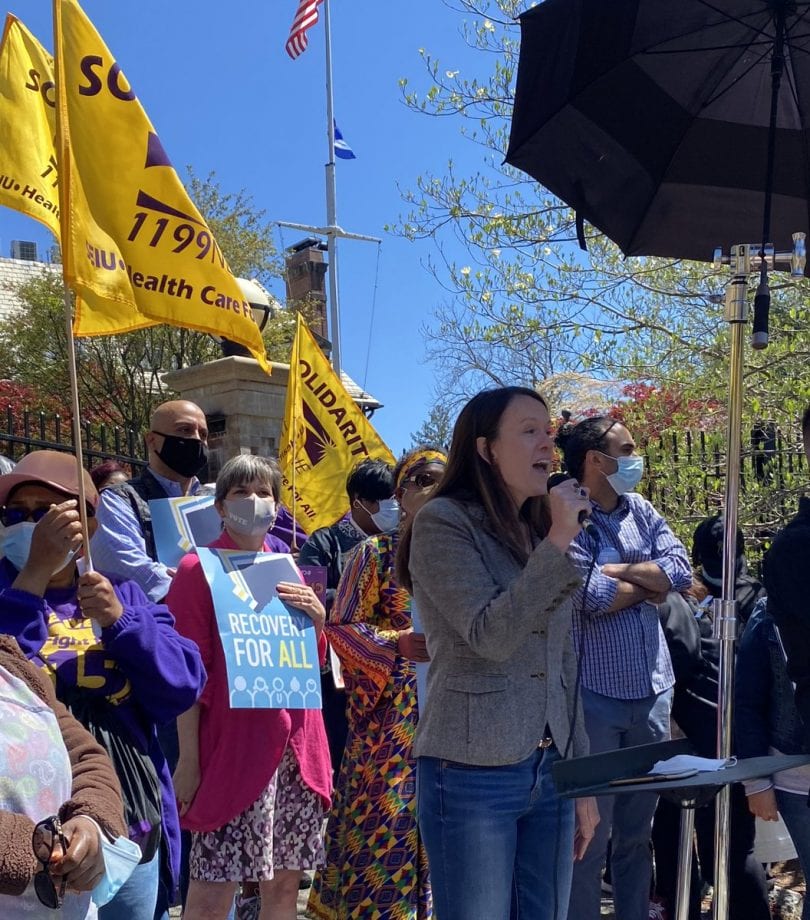 State Rep. Jillian Gilchrest of West Hartford addresses the crowd at the May Day rally outside the governor’s mansion. (Photo Courtesy of Recovery for All)

State Rep. Jillian Gilchrest of West Hartford, who spoke at a ‘May Day’ rally, said she thinks the state needs ‘equitable taxation in order to invest in programs and services that can provide Connecticut families with relief and opportunity.’

Lawmakers received some welcome news last week that may make it easier to balance the budget without tax hikes, but that didn’t stop hundreds from rallying in favor of tax hikes outside the governor’s mansion this weekend to call for changes to the tax code.

The legislature’s Office of Fiscal Analysis and the governor’s Office of Policy and Management determined that Connecticut will see revenues increase $1.64 billion more than projected over the next two years.

“The consensus revenue estimate shows Connecticut is in a strong position,” House Speaker Matt Ritter and Senate President Martin Looney said in a joint statement following the release of the numbers. “Our Appropriations Committee approved a fiscally responsible budget that looks to keep Connecticut moving forward.”

The Democrat-controlled legislature and the governor’s office are currently in negotiations over the two-year state budget.

“There can be no question that, once again, the consensus revenue forecast is good news for the state of Connecticut based on where we thought we would be last spring,” she said. “We continue to see stronger than expected performance in our economy which improves our revenue estimates in the current year and in the future. However, that must be balanced with the fact that our state’s unemployment rate is still 8.3% and above the national average, that this forecasted revenue improvement still does not bring us back to our pre-pandemic estimates, that we are still relying on one-time federal funds for ongoing expenses and that we still have projected budget deficits measured in billions for the foreseeable future.”

As far as revenues are concerned, most of the $1.64 billion increase is untouchable because it falls under the volatility cap and will need to be deposited into the Rainy Day Fund. When the Rainy Day Fund exceeds 15% of general revenues then any excess goes to pay down state employee pension debt.

The legislature could vote to move those tax receipts that fall under the cap elsewhere in the budget but they would need a 60% majority to do that.

“Even as we see historic levels of federal funding coming to Connecticut and a surplus this year, Democrats cannot help themselves,” Senate Republican Leader Kevin Kelly has said. “They want even more. They think Connecticut residents don’t pay enough already. Some of these tax increases are regressive and will hurt those most struggling today.”

While Lamont himself is not on board with any more tax increases, it’s unclear what may happen in negotiations with the legislature.

Lamont has said he doesn’t support the Finance, Revenue and Bonding package, which includes a tax on those making more than $500,000 a year and a 2% capital gains surcharge.

“Respond to that with just more taxes is not the way I think we should be going as a state,” Lamont has said.

Lamont’s budget director says Connecticut is on the right path.

“It is clear Connecticut is on the right track, as we have seen with maintaining our historic savings through the pandemic, a recent credit rating upgrade, and an influx of substantial federal resources to make transformative investments across the state, but there is still much more work to be done,” McCaw said.

Still, labor, faith leaders and advocates are pushing Democratic lawmakers to move forward with a tax package that increases taxes on the wealthiest. It’s why they protested outside the mansion in Hartford on Saturday.

He said they want to see changes to the tax code.

Rep. Jillian Gilchrest of West Hartford, who attended the rally Saturday, said she’s working to convince her colleagues to raise taxes on the wealthy.

“The pandemic illuminated Connecticut’s racial and economic disparities that have existed for far too long. Middle and low-income working families are struggling. We need a recovery that remedies the wrongs of our past and sets Connecticut on a new trajectory.”

“I think we need fair taxation and we need to invest in our people,” Gilchrest said. “We need equitable taxation in order to invest in programs and services that can provide Connecticut families with relief and opportunity.”