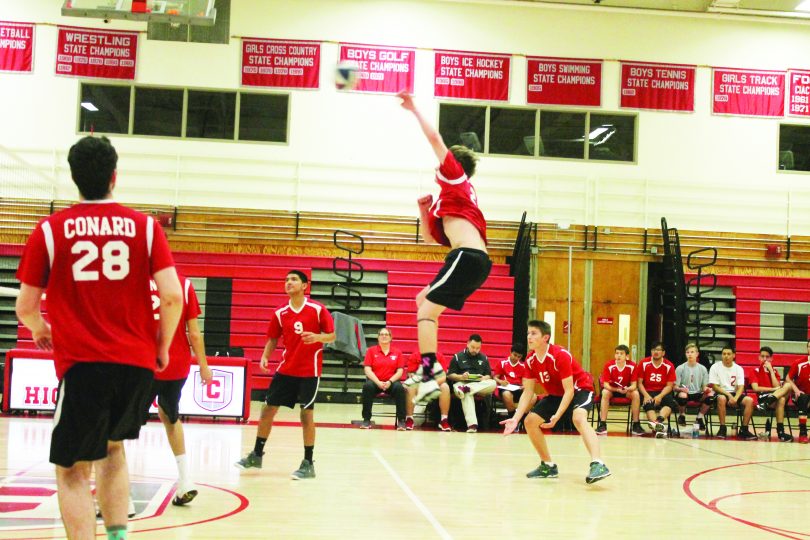 Ryan Roller going up for a kill with his mother, coach Kerry Roller (background) looking on. Photo credit: David Heuschkel

One of the players on Kerry Roller’s boys volleyball team at West Hartford’s Conard High School is someone who has been around the sport since before he was born: her son, Ryan. 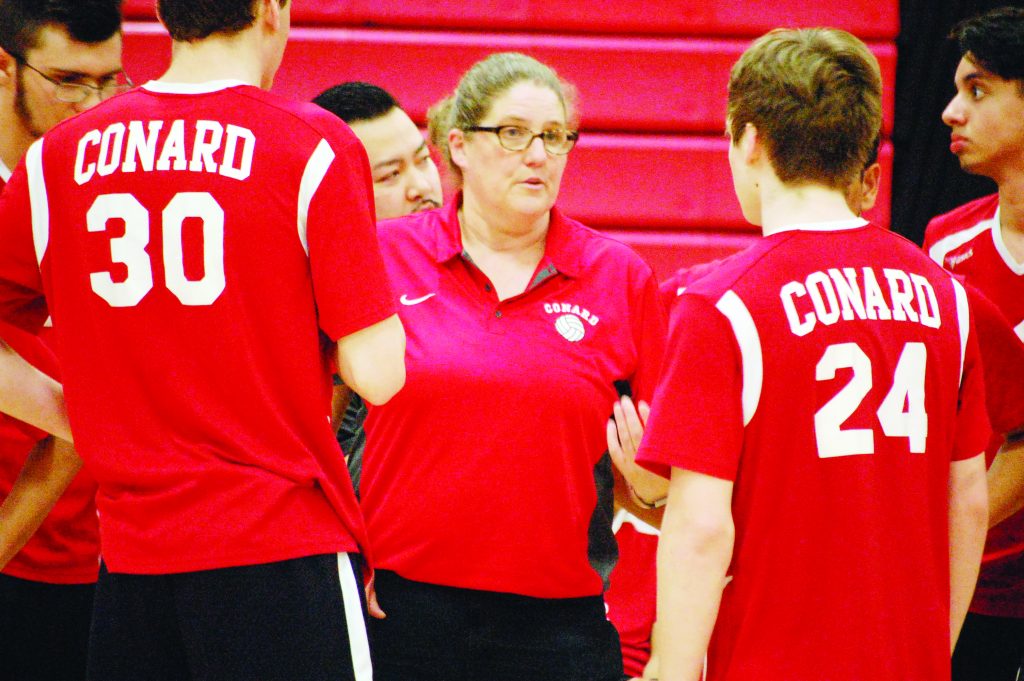 Conard High boys volleyball coach Kerry Roller remembers being nauseous on the bus ride to Shelton for a match in the spring of 2002. At the time, she didn’t know what made her feel ill. It wasn’t nerves or something she ate. It was an unborn child.

Roller, who was experiencing the early stages of pregnancy that day, likes to say her son, Ryan, was in a gymnasium even before she gave birth to him in December of that year. 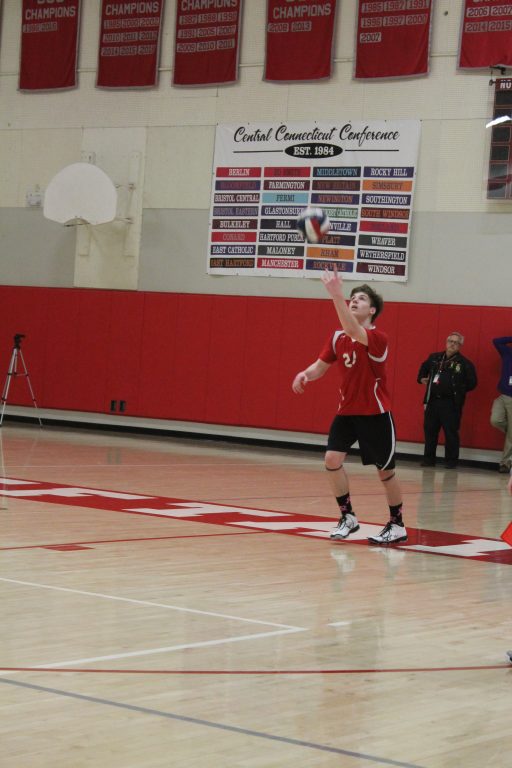 As a sophomore on the Conard High volleyball team, Ryan Roller is still spending time in the gym with his mom. He no longer builds forts with the rubber mats or plays with a ball in the corner by himself.

Through the first nine matches this season, Ryan Roller had 98 kills along with 48 digs and 19 service aces.

He said playing on a team coached by his mother doesn’t feel awkward. Kerry Roller has coached both the boys and girls volleyball teams since the late 1990s.

“I just expected her to be there as a coach and tell me what to do,” said Ryan, an outside hitter.

Ryan didn’t start playing team volleyball until he played on his mother’s team at Conard as a freshman last year. Prior to that, his only hands-on experience with the sport was attending a Husky camp as a seventh grade student.

Kerry Roller played on the women’s volleyball team at Rutgers in the late 1980s. She was the first Scarlet Knight to earn all-conference honors in the Atlantic 10, first as a sophomore in 1988 and again as a senior. Known as Kerry Cody back then, she still holds the school record for block solos (131) and is second in total blocks (402) and service aces (224).

Jeff Roller knows how good a volleyball player his wife was in college. He regularly attended her matches, often working as a line judge.

“I actually picked it up only after seeing Kerry play in college,” Jeff said.

When she saw Ryan at tryouts last season, Kerry Roller initially thought it would be best if him played on the JV team. She said her son was “lost half of the time” on the court. Having never played on a volleyball team, player rotation was foreign to him. A quick learner, it didn’t take long for Ryan to grasp it.

“After our first scrimmage, I knew that skill-wise he had to be on varsity because we didn’t have a strong team last year,” Kerry Roller said.

“He’s a good listener and he applies what he hears,” she added. “I think that has helped him over the years because he’s heard me coaching over the last 15 years. He wasn’t applying it at that time, but he was listening. He’d go back to the wall and play with the ball and just do things that most kids would go back and do on their own.”

Ryan is an ideal outside hitter because of his leaping ability. Jeff believes his son would make a terrific setter because he’s a good passer.

It can be traced back to his days when he was young boy who was always bouncing a ball in the corner at Conard practices.

“He was a gym rat. He would always be playing,” Kerry Roller said. “It’s about ball control and that’s what he was best at – having ball control. He would just be juggling the ball by himself.”

Kerry Roller said neither she nor her husband steered their son toward volleyball. His parents say if there’s a discussion about the sport away from the gym, they prefer Ryan initiate the conversation.

“It’s a lot healthier to sometimes even just let a game go,” Jeff Roller said. “If you haven’t done well or the team lost, you let it go and hit it hard the next time. He’s very good at doing that.”