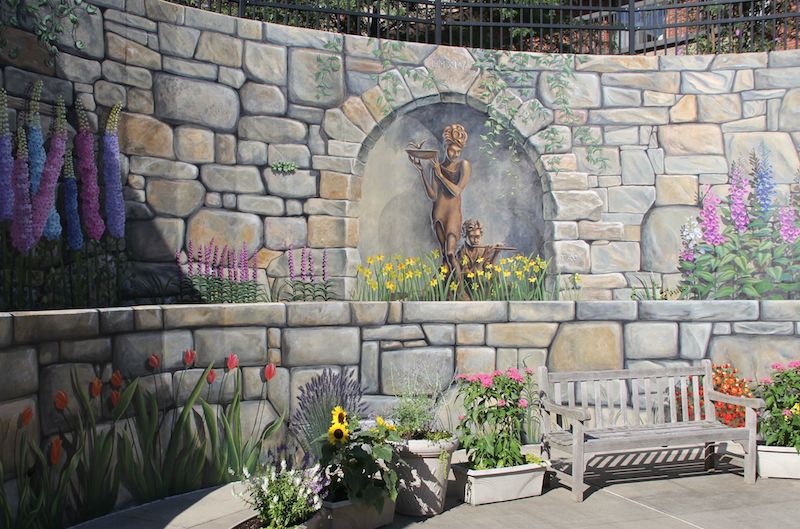 The “Everlasting Spring in the Secret Garden” mural by Hartford artist Tao LaBossiere was unveiled at Saint Mary Home in West Hartford during a special reception for donors, friends and residents on August 14, 2014.

By Joy B. Taylor

West Hartford Mayor Scott Slifka said that he has been searching for the perfect spot to have a mural painted by local artist Tao LaBossiere ever since the two met several years ago. Now, thanks to some brainstorming by local art lovers and physical therapist Lisa Ciotto of Saint Mary Home, that dream is a reality with the opening of the “Everlasting Spring in the Secret Garden” mural.

In just a few short months, LaBossiere and his team transformed a blank retaining wall into a tromp l’ oeil of stonework complete with flora and fauna, ensuring that even in the bleak winter months, a vision of spring will always be found.

“With limited government dollars to sponsor art installations, we haven’t been able to fund a project like this in town,” said Slifka during the mural unveiling reception at Saint Mary Home (which is part of The Mercy Community at 2021 Albany Avenue in West Hartford). “Now this hidden gem will add to the spirit of our community,” added Slifka, noting that Saint Mary Home has always strived to nurture community spirit as a supporter of the arts, and volunteerism.

“We bloom together,” said The Mercy Community President and CEO Bill Fiocchetta in his opening remarks. The Mercy Community has had a long-standing commitment to a comprehensive art therapy program for the Alzheimer’s/Dementia Special Care Community at Saint Mary Home. By surrounding residents with visual art and music whether they can participate or not, even after verbal communication has become difficult, “reawakenings” are possible, said Fiocchetta.

Fiocchetta thanked major donors Frances B. Sergi and Barbara O. Hetrick, who were in attendance with their families, for making the mural project a reality through their support and love for the arts. The contribution of others were noted as well, including Amy LaBossiere, the project business manager half of Tao’s art business (Fine Art Painting, LLC) and the interns/artist assistants Anita Balkun, Natalie Padberg Bartoo, Yeny Flores, Anna Murfin, Joe Nicorici, Sarah Paolucci, Adam Viens, and Brett Wilson who worked side-by-side to finish the project which just began in April 2014.

The attention to detail is amazing and the artists were “encouraged by Tao to bring in actual flowers and plants as live reference,” explained Balkun, a West Hartford artist and teacher. She said they would attach the leaves and plants right to the wall as they worked on the mural to help see the different angles and shapes and colors.

Public viewing hours for the mural will be made available beginning in September, but a short documentary of the creation of the “Everlasting Spring in the Secret Garden” project, as captured by photographer and videographer Lanny Nagler and including reactions from residents, will be posted later in August at www.TheMercyCommunity.org.