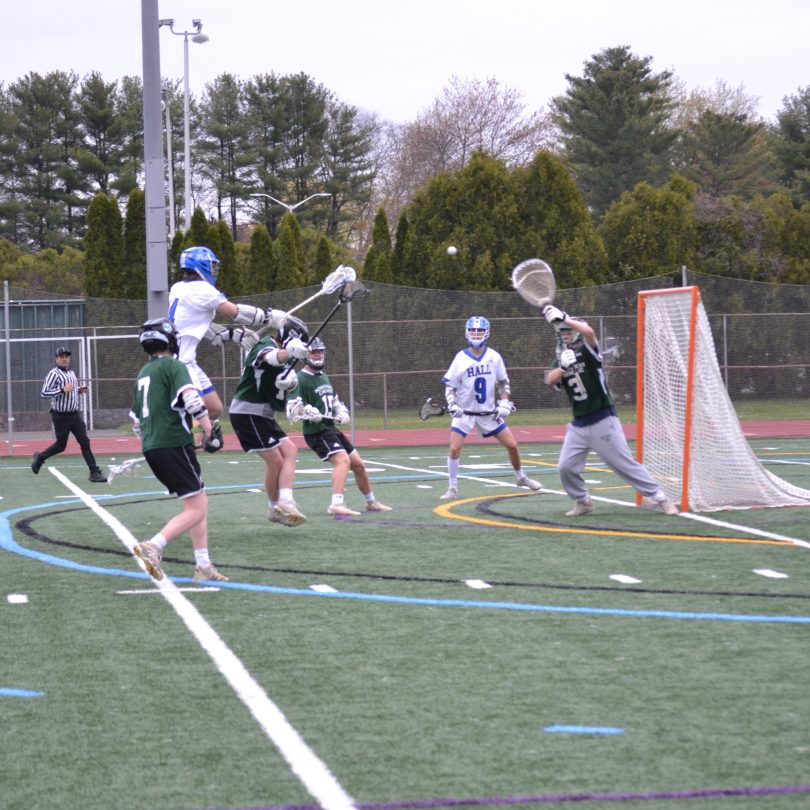 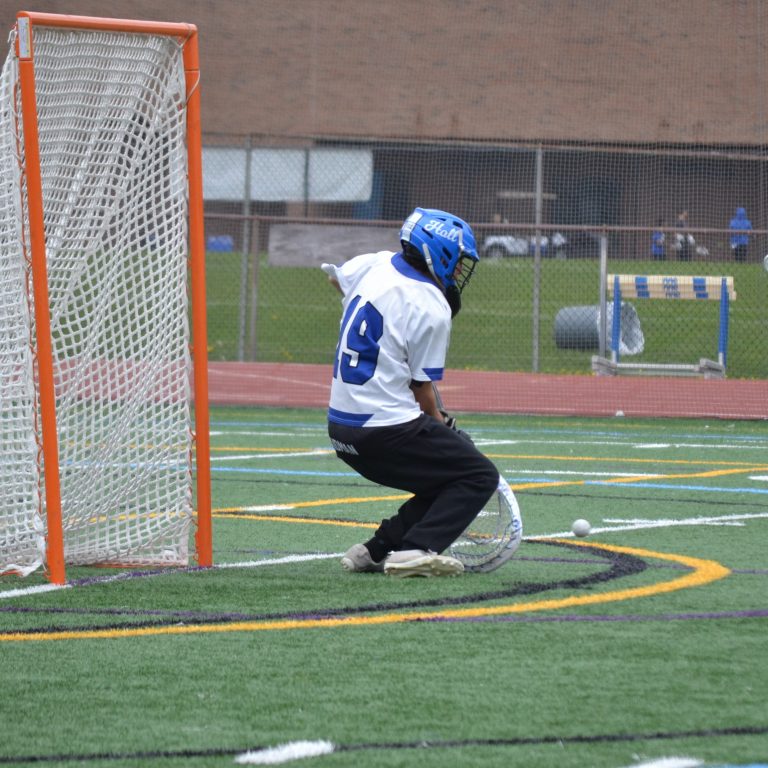 Goalie Jared Maidman of Hall makes a save against NWC in the Warriors’ win. Hall vs. Northwest Catholic boys lacrosse. May 2, 2022. Photo credit: Paul Palmer

It was a tale of two halves as Northwest Catholic dominated the opening 24 minutes, and Hall owned the final two quarters, as the Warriors topped the Lions 13-11 in a thrilling boys lacrosse matchup.

“It was a battle,” said first year Hall head coach Jerimee Moses. “They had a run, then we had a run. It was a good team win.”

The first quarter saw seven goals scored between the teams as Hall got on the board first but the visitors scored in bunches to take the lead. Ethan Stagg of Hall got things started just 53 seconds into the contest when his bounced shot beat goalie Hunter Wilcox. Northwest answered just 12 seconds later when midfielder Cameron Barone found himself alone in front of the Hall net and goalie Jared Maidman. Barone made no mistake with the shot and it was 1-1 just 1:05 into the game. 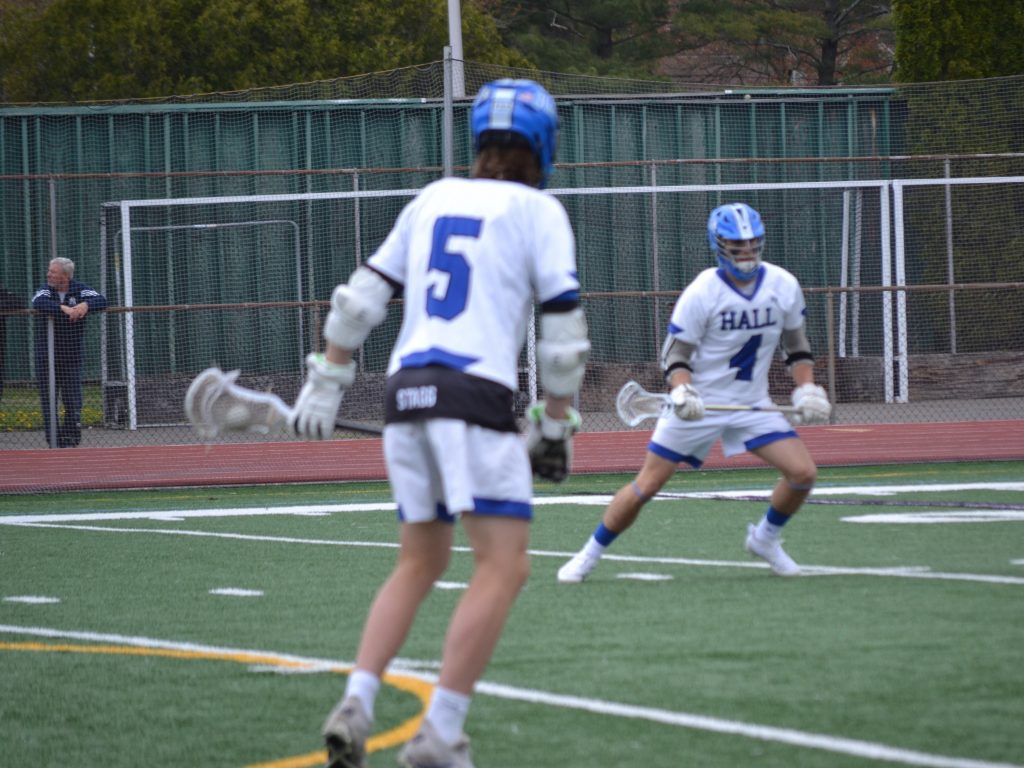 Hall would get the next two when Logan Murphy scored the first of his four goals on the day. The senior middie came from behind the net, faked one way and shot the other. About four minutes later it was Murphy setting up Bode Smith for the first of his three tallies as his low shot beat Wilcox and it was a 3-1 lead.

The Lions woke up after the Smith goal, in particular attackman Patrick Meuser. The senior, the biggest player on the field with the widest wingspan, muscled his way around a Hall defender moving right to left and firing in the goal. Less than a minute later Meuser found himself all alone in front of the cage, but Maidman stopped his shot. With 3:20 to go in the first, Meuser carried the ball along the sidelines, and found Barone in front for the goal for another score.

After Hall failed to convert on a man-advantage, the Lions closed the quarter with John Staunton’s goal with just 56 seconds to play. 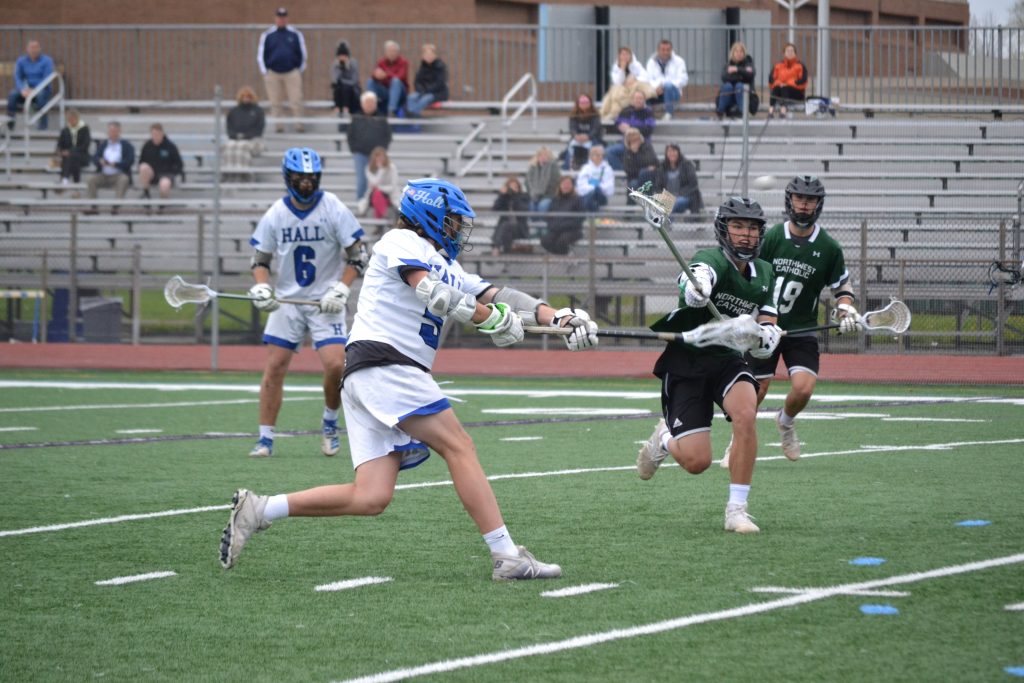 Trailing by just one as the second quarter began, Northwest turned up the goal scoring. Meuser scored again 49 seconds in. Staunton followed two minutes later, and then the Lions took advantage of a Hall turnover in transition to take a 6-3  lead 4 minutes into the second. Murphy would get one back for the Warriors with his goal from the left side at 7:39, but Meuser used his size and strength again to push his way in close to the goal and score just 30 seconds later.

Meuser would score three times in the first half, but be held scoreless the rest of the way. Moses credited senior defenseman Riley McGowan with stepping up his game. “He’s a senior who stepped up his game, and his teammates gave him a hand as well.”

Hall began dropping multiple defenders on Meuser once he started moving towards the net with the ball, forcing his shots to go wide. 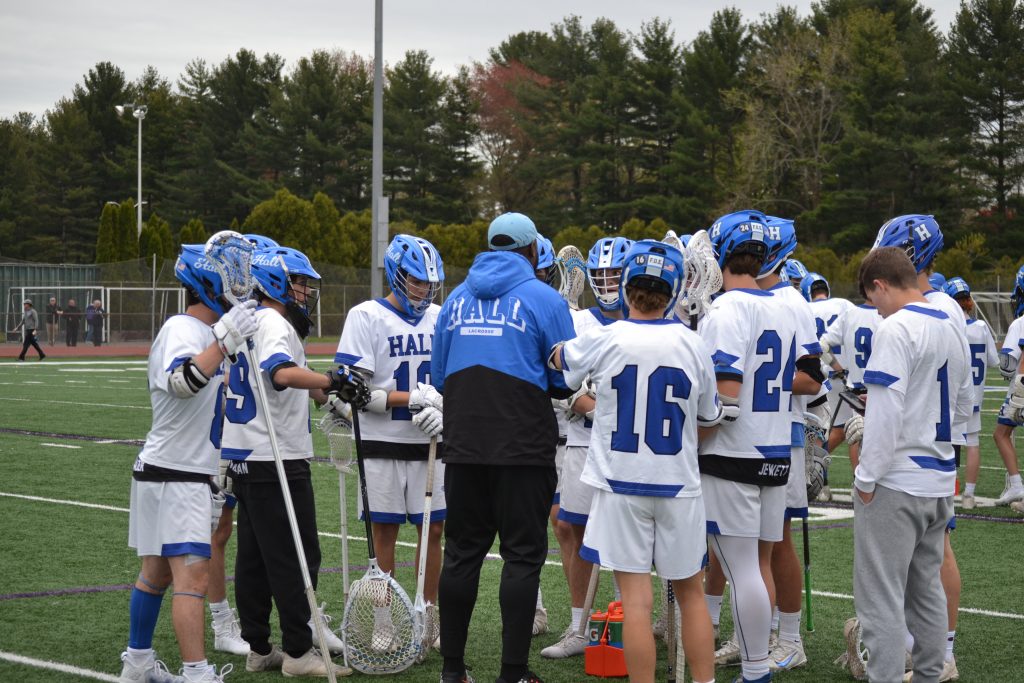 As bad as the first half was for Hall – down 10-6 at the break – the second half was as good for Hall. The Warriors might have been wondering if things would change for them early on. With a man advantage carrying over for the opening 25 seconds of the third, they failed to score. Ninety seconds in, Wilcox made one of his best saves of the game to deny Hall.

Five minutes into the third, it was Murphy taking matters into his own hands and getting the Warriors on track. He took possession of the ball behind his own net and using his speed and moves raced the sidelines, cut to the center of the field, and fired in a shot that beat Wilcox to make it 10-7.

“He is a strong offensive leader,” said Moses of his senior player. “At times he is our clearing game. He really does the grunt work.” 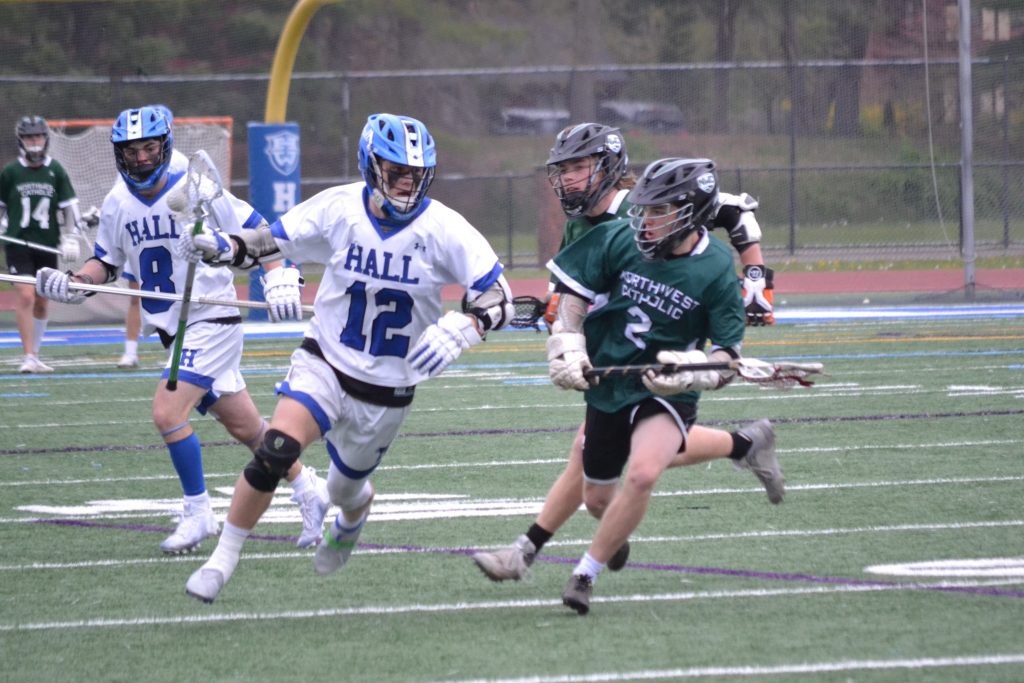 Nine seconds later his teammate Smith would use a nice overhand shot to cut the deficit to just two. Then with just over seven minutes played, Henry Schlatter found Murphy at midfield with a pass. Murphy raced into the attacking zone, faked a pass to a teammate and fired a shot past Wilcox to make it a 10-9 game, forcing Northwest to take a timeout.

Out of the pause, the Lions’ Elliott Halpern controlled the faceoff and allowed his team to setup in the offensive zone. But Hall would force a turnover, and Grant Kanaga would tie things up with his goal at 4:05. The Warriors had a chance to blow things open when back-to-back penalties were called on Northwest, giving Hall a two-man advantage. But the defense held strong and denied Hall any chance at taking the lead.

The third was a total turnaround for the host Warriors as they began using their transition game to setup scoring chances. They scored four goals and kept the Lions off the board. That pattern has been a familiar one for Hall so far this season. “We like to stay in the locker room in the first half,” joked Moses. “At the half they realized it’s a crosstown rival and they wanted to win this one.” 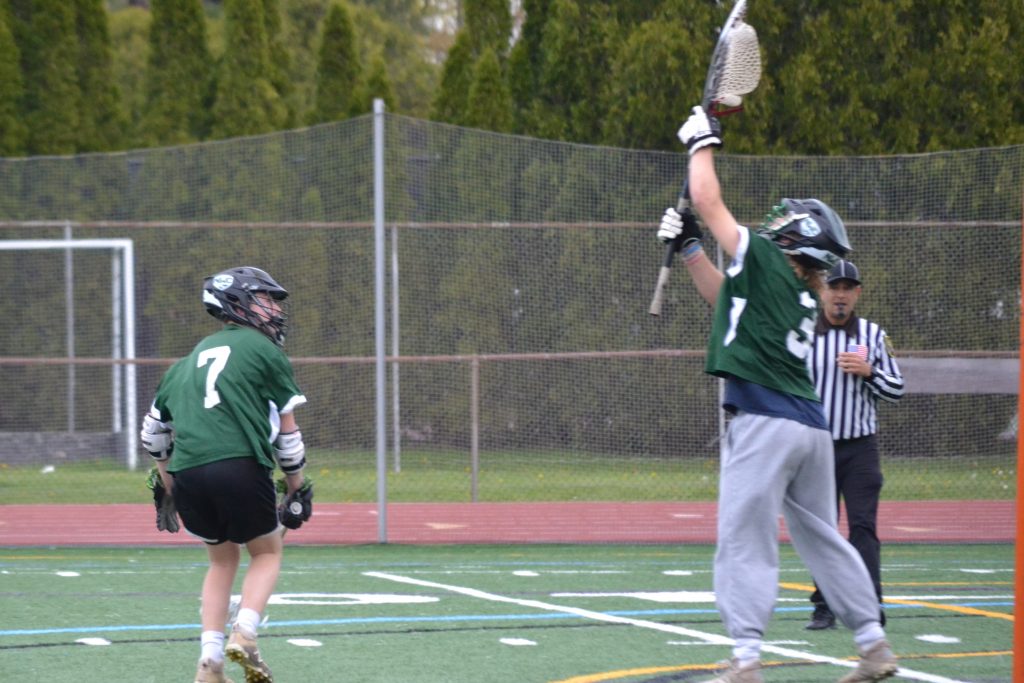 With the score tied, the two teams took the field for the final 12 minutes of play. As they did a slight mist and breeze began. One minute in it was Smith unleashing a rocket on a pass from Landon Traverse, and Hall had come all the way back to take an 11-10 lead.

With momentum clearly on their side, Hall pushed the tempo and it paid off just 51 seconds later when Murphy made another long run with the ball and capped it off with a goal to give Hall the 12-10 lead. The two sides would exchange attacks, with Hall showing more energy each passing minute and starting to win the loose ball battles all over the turf.

But Northwest was not going to give up, and with 3:01 to play, Staunton found James Hurley cutting to the net and he made no mistake, taking the pass and beating Maidman to make it a one-goal game again. Moments later, Halpern had a chance to tie things up from right in front, but Maidman was equal to the shot and preserved the lead with a huge save.

Fittingly, Smith would be involved in the final Hall goal, when he found Kanaga cutting to the net, and Kanaga’s low shot beat Wilcox from in close range to close out the scoring and the game at 13-11.

“As a group, we were strong on defense today and that gave us the opportunity in transition,” Moses said after the game. The win was the fourth straight for Hall, and moves the Warriors to 6-4 on the season as they begin to think about securing one of the 16 seeds for the post-season tournament. Northwest, which came into the game ranked 10th in Class S in the state, drops to 6-3, but has still won four of its last six games. 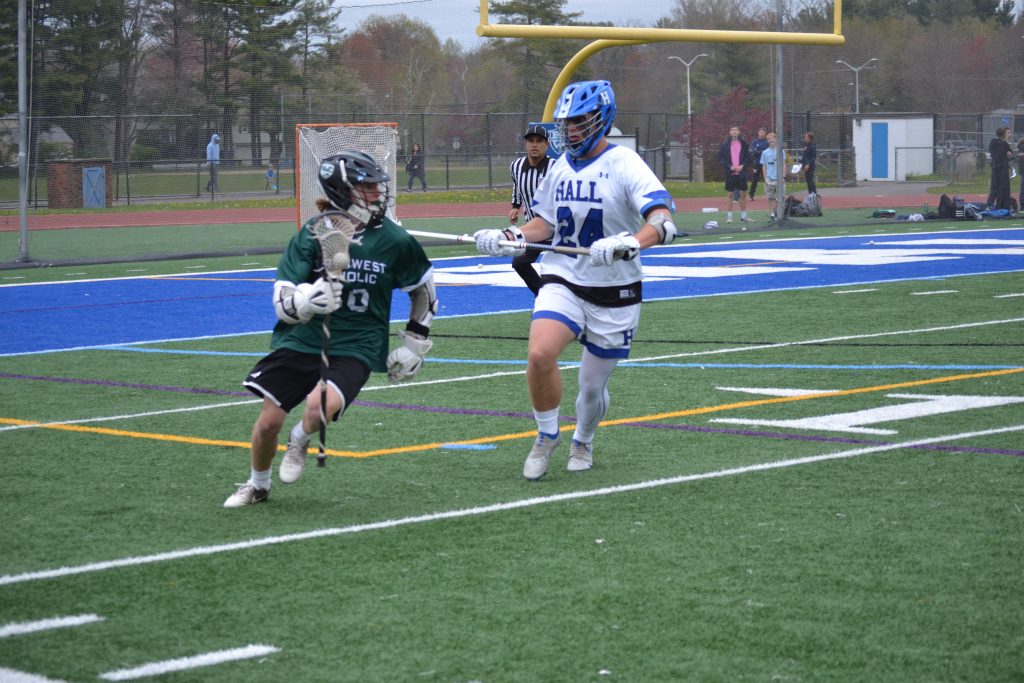