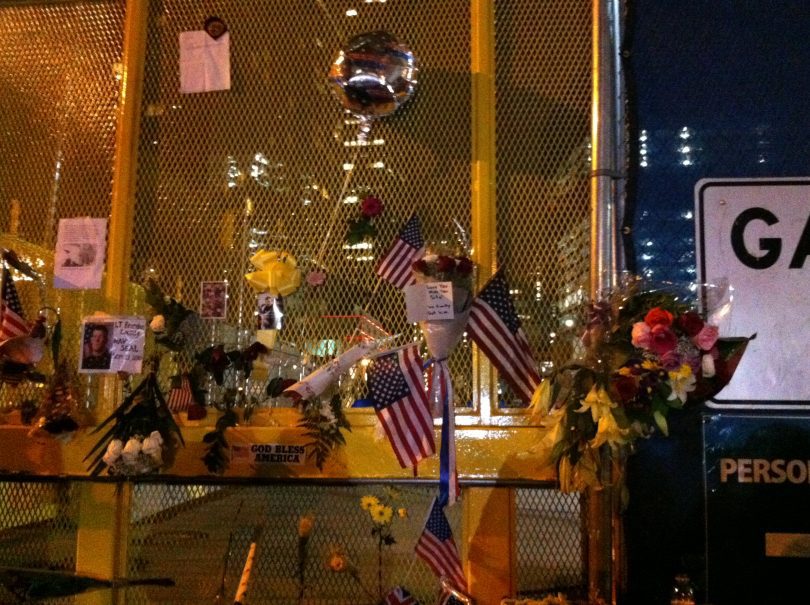 I wrote an essay, that I titled “Turning Points,” just days after the Sept. 11, 2001 tragedy, and I re-read it every year on the anniversary. Even my own words bring tears to my eyes as I remember fear, loss, and a profound sense that the world my (then) young children would grow up in would be very different from the one I knew as a child.

I re-read it every year as a way to ensure that I will never forget how I felt that day, how most people in this country felt. It was a time when we as Americans first realized that unimaginable terror could affect every one of us.

I spent 11 years working for international insurance brokerage and consultant Marsh & McLennan before I became a journalist. That company had offices on floors 93-100 of the North Tower, and many of the company’s employees, my former colleagues and even one of my former managers, Tom Duffy, perished that day.

I can’t think of any better way to put into words what 9-11 means to me.

When I wrote this my kids were 6 and 3, and both are part of the “9/11 Generation.” My daughter can barely remember the pre-9/11 world, and my son barely remembers anything about that day.

The photo that accompanies this article is one I took in May 2011, with my then-brand new iPhone 4, not quite 10 years after the towers fell. I was in New York for a training program and visited Ground Zero where the construction site of the 9/11 Memorial was underway.

We have all moved on, but we will never, and should never, forget.

I feel I have to say something. It’s very personal, but we all have something personal to say right now. I hope it will help me to deal with my feelings, and help anyone who reads this to sort through their feelings, too.

This year has been full of turning points – isn’t every year? I turned 40 a few months ago, and my husband threw me a big surprise party. I was truly surprised, and tears came to my eyes as I saw my backyard full of family and friends gathered to celebrate and to tease me about entering a new decade. I really didn’t mind hitting the “big 4-0” since I am happy with my family, friends, and life in West Hartford. I was just beginning to train for my first marathon, and can now say that I am in much better physical shape than I was at 30 or even 20.

This is the toughest time in my marathon training program. After next weekend I can begin to cut down my mileage and maybe sleep past 5:45 in the morning. Running has been my therapy and saving grace over the last six days.

Tuesday, 9/11, I was out running as usual just after 6 a.m. As many have said, the day began beautifully on the east coast – certainly in line to be one of the “ten best” of the year. I ran my morning 4-mile route faster than I ever had before. My 6-year-old daughter Katie didn’t complain about her clothing and shoes on the way to school. My 3-year-old son Sam actually agreed to ride in the stroller.

He and I were back home from walking Katie to school right around 9 a.m., and I had promised him a rare opportunity to watch “Bob the Builder” on Nickelodeon. I sat down to finish my coffee and breakfast, and read the newspaper.

When the phone rang at 9:15 a.m. it was my sister, Debbi, calling from her office in New York. Without any greeting, she said, “Don’t worry, I’m not near it, and I’m fine.” I had no clue. She wanted to know if I was watching the news. I said, “No, Sam is watching Bob the Builder” as I turned on the kitchen TV and saw both World Trade Center towers in flames. Assured that my sister was at least relatively safe in her office at 30th and Madison Avenue, far enough from the WTC, I watched the rest of the terror unfold as the Pentagon was hit and the towers collapsed.

I called my husband at work in Springfield, Mass. – he hadn’t heard yet. My daughter was safe at school, my husband was safe at work, Sam was enjoying Nickelodeon which thankfully did not interrupt its programming.

We all had myriad random thoughts as those images spread across our televisions. I thought how glad I was not to be working in Washington, DC, anymore – just a few blocks from the White House. I called a few friends to make sure they knew what was happening. I tried to call my sister again, but the circuits were busy. I finally communicated with her by email and she promised to try to reach me once she walked home to her apartment on the upper east side.

My stepbrothers all work on Wall Street, but they escaped without injury. I knew my previous employer, Marsh & McLennan, had a presence in lower Manhattan, but did not know they occupied floors 93-100 of the North Tower until I saw it in Thursday’s newspaper. I joined a chat room on Marsh’s website that morning to try to find out more about my former co-workers who are missing.

Everyone was afraid and numb on Tuesday 9/11 – and I can think of no other turning point which has affected so many people. My family was lucky to be together that evening, and we gave the kids many extra hugs. We don’t know what will happen next. The world has evolved to a point where terror cannot be easily catalogued and fought with traditional methods.

There have been other tragedies in my lifetime and in that of my family. My father escaped Nazi control of Austria to move to New York with his family in 1939. He was only 7, but his life was forever changed. He saw the Anschluss, watched from his home as Hitler’s soldiers took over Vienna.

I have vague memories of JFK’s assassination – mostly I remember the reactions of my parents as they learned of the first presidential assassination in almost 100 years. I remember being scared of the riot scenes in DC shown on TV in the late 60s, and the assassinations of Martin Luther King and Bobby Kennedy. I wasn’t much older then than my daughter is now. What will she remember?

My memories of the Vietnam War are mostly of the protesters – including the teenagers who burned flags at the house across the street. I worked in Washington, DC, during the Gulf War, and remembered the inconvenience of a bomb scare in our building on the day a large proposal was due. I feel very different now.

My mother died of lung cancer in 1990. I can’t bring myself to visit the cemetery, preferring and continuing to grieve in my own private way. My husband and children went to church yesterday, but I haven’t attended any religious services. I’m not good at formal, public displays of emotion, but my family stood on our driveway and lit candles on Friday night at 7 p.m.

What will happen next? My daughter has asked me some very tough questions: “Why do people hate the United States? Why would God make people so evil?” I have no answers; no one can really answer those questions. On Wednesday, Sept. 12, she wrote and drew a picture in her first grade journal just like she does every school day. The picture was of two tall buildings, each being hit by a plane, flames erupting, and a partially destroyed car. Her words read that she “did not like yesterday because two buildings were hit by two planes and people were hurt and died.” She’s been pretending to rescue her dolls from a lightning storm and big fire.

Larry King (on CNN) interviewed some experts last night. They were talking about biological warfare. No matter what we do, we can never be as sure and confident in our freedom to walk the streets and live our normal lives.

A few weeks ago some graffiti appeared on the Stop sign at the top of my street. Someone had written the word “HATE” under “STOP.” Now a small flag with the words “America Unites” has been taped to the pole. I hope it stays there.

As I ran through the streets of West Hartford before sunrise this morning American flags were everywhere – flying on traditional flagpoles, from windows, on trees, from car antennas. It is the same across the country. Bits and pieces of songs ran through my mind: “Oh say can you see, by the dawn’s early light …;” “God bless America… ;” and the words from Sting’s cold war era song, which have always haunted me: “We share the same biology, regardless of ideology … I hope the Russians love their children, too.” Do terrorists have children?

I was a political science major in college during the early 1980s. Reagan was running for president, and the Soviet Union was still the enemy. We studied “Zero Sum games” in class, a detente reached because the powers knew there could be no winners – only losers. I don’t know if that’s the game we’re playing now. It scared me then and it scares me now.

Acquaintances are afraid to ask the thoughtless “How are you doing?” – afraid of the stories they may hear. My sister says everyone in New York is just so glad to see each other.

What will my children write about when they are 40? We have all reached a turning point. We all hope the direction is the right one.