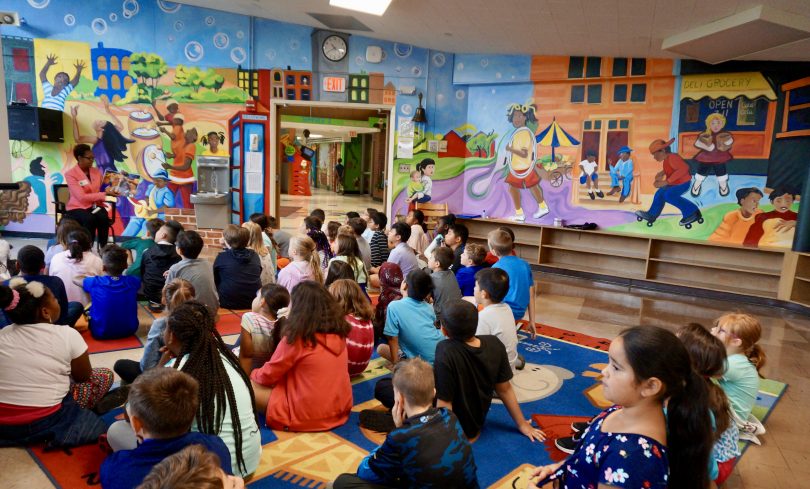 Surrounded by a mural depicting scenes from the book, Dr. Roszena Haskins, director of Diversity Enhancement for West Hartford Public Schools, reads 'Around Our Way on Neighbors' Day' to Wolcott fourth-graders and speaks to them about community. Photo credit: Ronni Newton

A children’s book inspired the celebration of ‘National Neighborhood Day’ at Wolcott Elementary School, and Principal Scott Dunn said each grade will be completing a related service project. 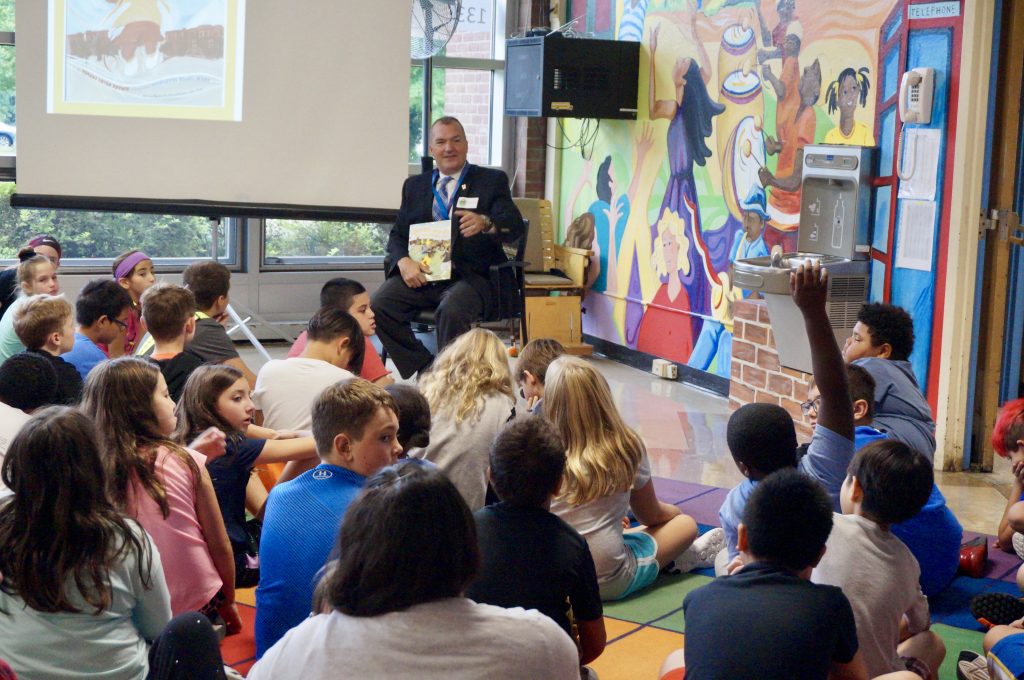 Assistant Superintendent Paul Vicinus, who is also a command sergeant major in the U.S. Army, reads ‘Around Our Way on Neighbors’ Day’ to Wolcott fifth-graders and speaks to them about community. Photo credit: Ronni Newton

Students at West Hartford’s Wolcott Elementary School celebrated “National Neighborhood Day” Monday, discussing what community means, different roles people play in the community, and what they can do to increase a sense of community locally and in larger ways.

Ashley Callan, townwide curriculum specialist for K-5 Literacy and Social Studies, said when she held a book fair last year to “increase then diversity of the books in our classrooms,” Wolcott Principal Scott Dunn fell in love with Tameka Fryer Brown’s book “Around Our Way on Neighbors’ Day.”

The book – about a girl who walks through her neighborhood and appreciates its diverse activities – focuses on neighbors gathering to celebrate the community in which they live, and Dunn really embraced the theme.

Callan and Dunn discussed how to bring Fryer Brown’s book to life, and he inspired the PTO to donate funds for a muralist, who painted vibrant scenes from the book in the cafeteria.

“We also learned about National Neighborhood Day, and how the kids can communicate that feeling to our community,” Callan said.

Sunday was officially National Neighborhood Day, but it was celebrated at Wolcott on Monday when members of the community came to read the book aloud to each grade in the cafeteria, surrounded by the mural. The readers asked the students to point to various scenes on the wall as they read.

Each reader also discussed the important and influential roles they play as “neighbors”  in the West Hartford community, and in the community at large.

Dr. Roszena Haskins, director of Diversity Advancement for West Hartford Public Schools, and head of the Equity and Diversity Council, spoke with the fourth-graders after she read them the book.

“We come together and we really look at how we are doing things to build community,” Haskins said of the Equity and Diversity Council. She said the administration wants to be sure that all of the town’s schools are a “happy place to thrive and grow. We want to make sure they are meeting your need to be successful … and safe, connected, and engaged in learning.”

Haskins told the students that the schools should be more than just welcoming, and that it’s important for the students to know “you have a voice.”

She asked the students what they think is important for them to be successful, and answers ranged from leadership, to kindness, to math, to reading aloud, to recess.

“Let me hear how important it is to build community,” Haskins said, as she asked students to cheer responsively. The back of the room said: “building community in every way,” while the front of the room chanted: “welcoming neighbors every day.”

“Do me a favor,” Haskins said to the smiling students. “Turn to someone and give them a high five or fist-bump.”

National Neighborhood Day at Wolcott has turned into more than just a day-long celebration. “We’ve also attached it to a service project,” Dunn said.

There are more than 20 different languages spoken at home by Wolcott families, she said, and the fourth graders will be making a video saying “Welcome to West Hartford” in those languages. Some will also be chosen to give a presentation to the Board of Education about National Neighborhood Day.

Vicinus, who is also a command sergeant major in the U.S. Army, also answered fifth-graders’ questions about the military, and then led them in an “army song.”

“Sing with me: ‘Hard work. Work,” Vicinus said, and the students responded, singing that phrase as the chorus as Vicinus created a song about working hard “the Wolcott way.”

For their service project, the fifth graders will be writing letters to new recruits and members of the military who are stationed overseas, to bring a smile to their faces and let them know that they are a valuable part of the community, teacher Jennifer Stanish said.

“It is so special to receive that,” said Vicinus, who recalled receiving letters from students when he was stationed in Afghanistan. 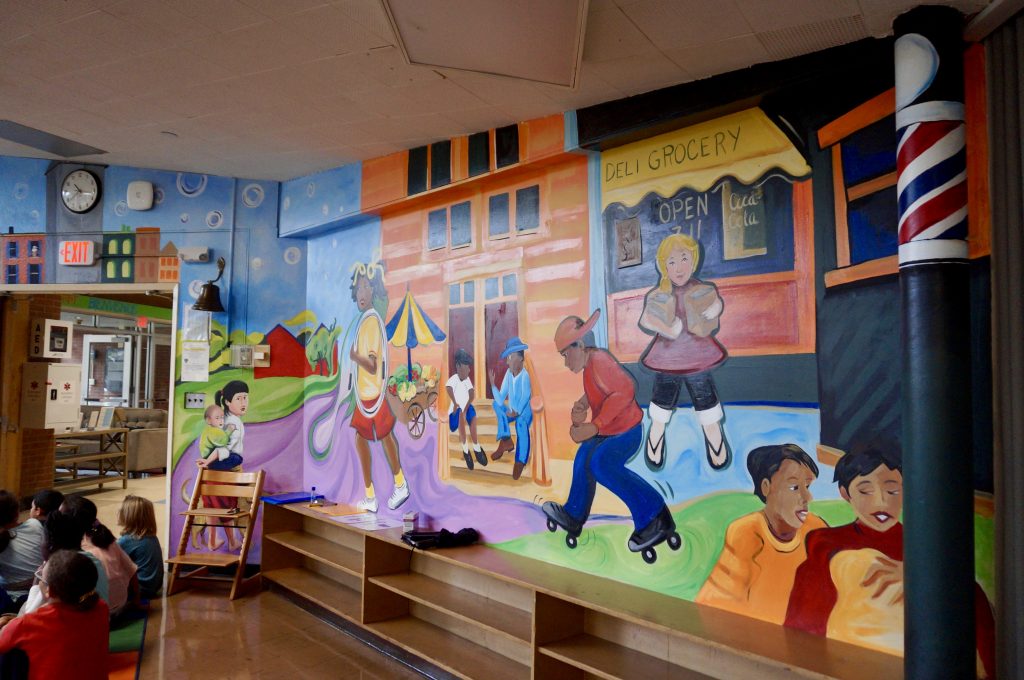 ‘Around Our Way on Neighbors’ Day’ mural painted in the Wolcott cafeteria. Photo credit: Ronni Newton 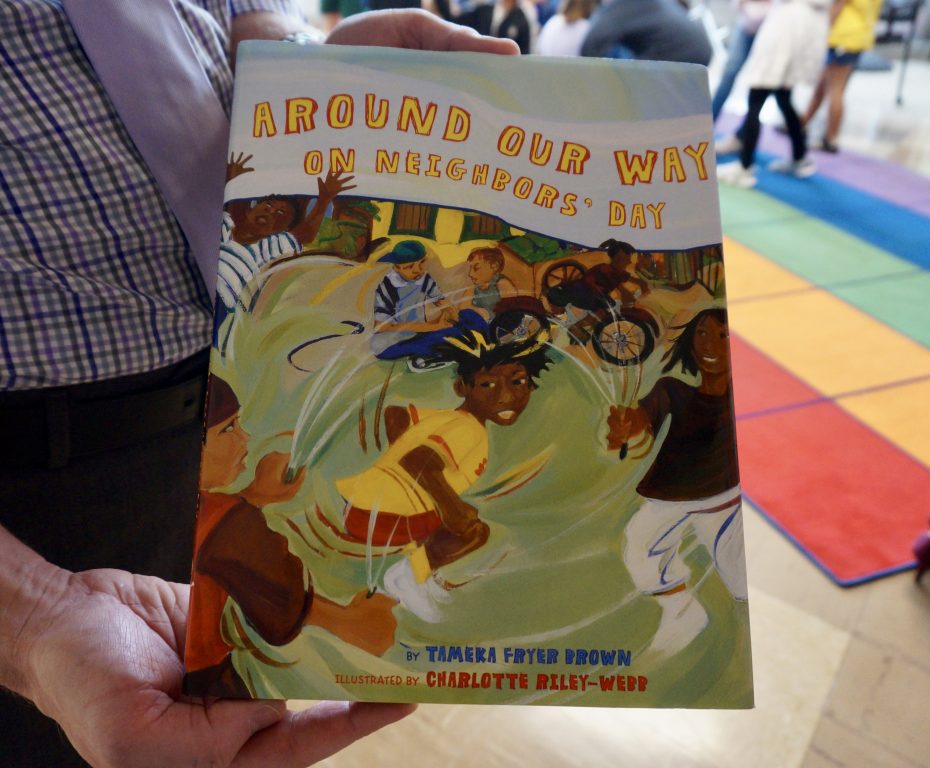 Wolcott Principal Scott Dunn holds the book ‘Around Our Way on Neighbors’ Day,’ which inspired the mural in the cafeteria, celebration of National Neighborhood Day, and related service projects. Photo credit: Ronni Newton 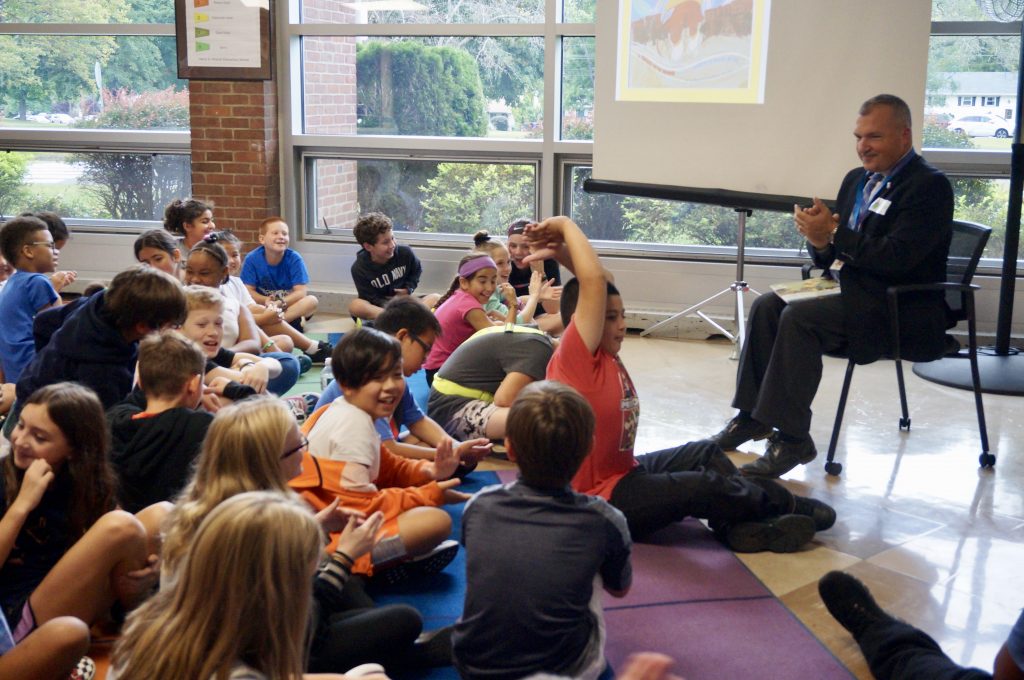 Assistant Superintendent Paul Vicinus, who is also a command sergeant major in the U.S. Army, reads ‘Around Our Way on Neighbors’ Day’ to Wolcott fifth-graders and sings an army song with them. Photo credit: Ronni Newton 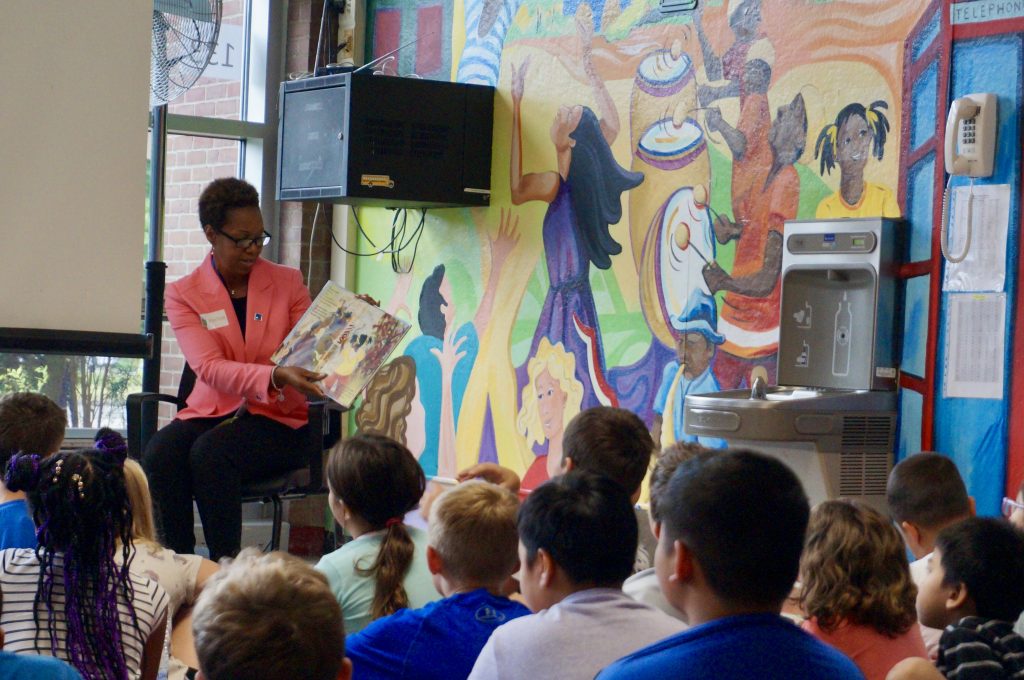 Surrounded by a mural depicting scenes from the book, Dr. Roszena Haskins, director of Diversity Enhancement for West Hartford Public Schools, reads ‘Around Our Way on Neighbors’ Day’ to Wolcott fourth-graders and speaks to them about community. Photo credit: Ronni Newton 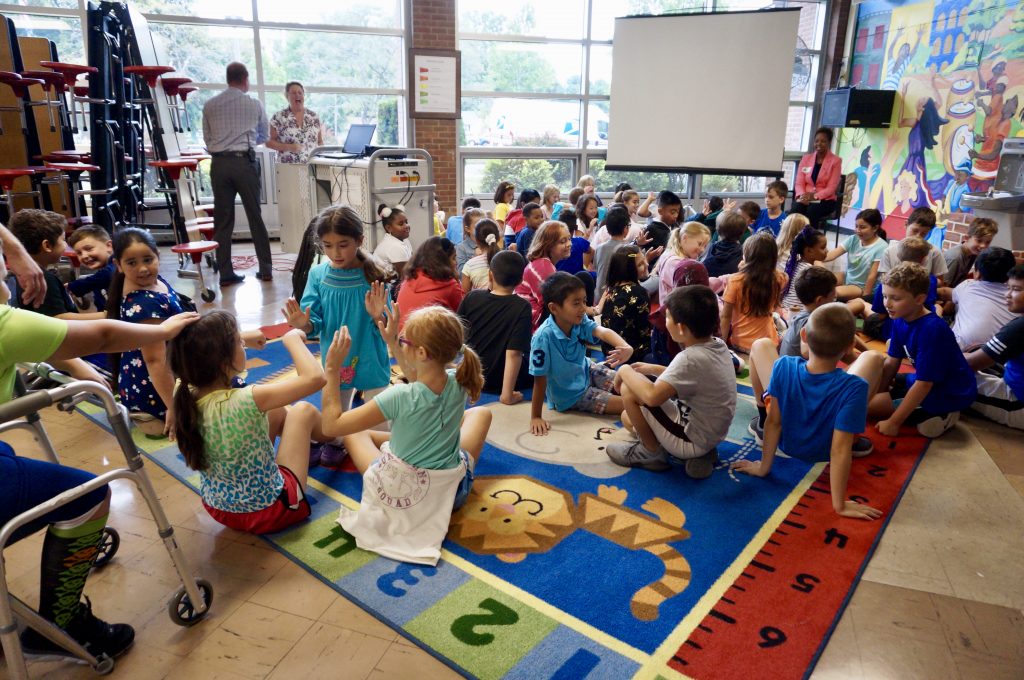