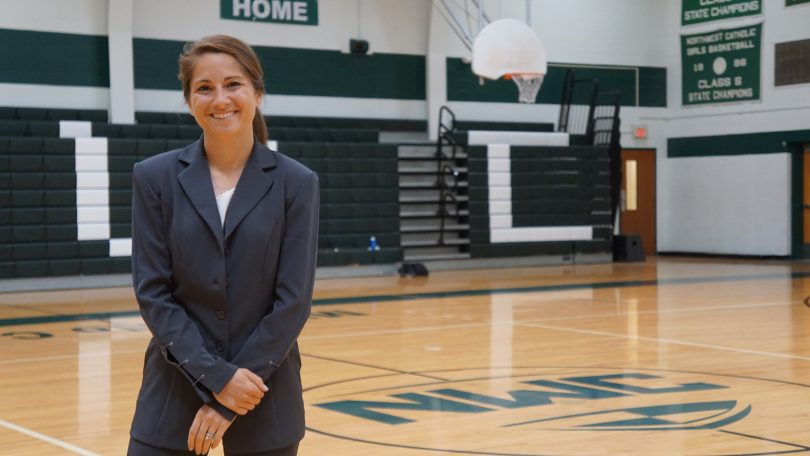 Ashley Mara, a 2008 graduate of Northwest Catholic, has been appointed the new Athletic Director at the West Hartford high school.

Last year Mara returned to Northwest Catholic as the school’s head women’s lacrosse coach and assistant field hockey coach, as well as lead teacher in the school’s new exercise science and wellness program. On July 1, she will assume her new role as NWC’s sixth athletic director since the school’s founding in 1961.

After graduating from Northwest Catholic in 2008, Mara continued her education at Central Connecticut State University where she played Division I lacrosse. In her senior year she was appointed co-captain and Most Valuable Player. She graduated from CCSU in 2012 with a B.S. in Exercise Science with a concentration on wellness for student-athletes from youth to collegiate levels.

Mara is excited about her new role at NWC. She wants to build on the school’s longstanding tradition as an athletic powerhouse, and she’s eager to effect change, strengthen the teams, and support the coaches. She’s also excited to develop a cadre of interns who want to learn more about the athletics industry, everything from conditioning to communications.

Mara said, “I am truly blessed that President Cashman and the search committee have given me this opportunity to return home to carry on the tradition of Northwest Catholic Athletics. Sports have played an integral part in my life, and I am excited to make a positive difference in the lives of our student-athletes, our coaches, and our Northwest Catholic community.”

Mara continued, “As an alumna of Northwest Catholic, it is a privilege to follow in the footsteps of the athletic directors who have come before me.” She concluded, “Together, as a community, we will advance our mission to educate the whole person – mind, body, spirit, and imagination.”

President Christian Cashman informed the NWC community of this important appointment on Thursday. He sent in an email: “Ashley brings a wealth of professional, athletic, and personal gifts to this position. She is a mission-driven, faith-filled competitor who believes in the development of the whole person.”

Cashman also shared exciting information about the school’s new master plan called Vision 2021, which will include extensive additions and renovations to the school’s athletic fields and facilities. He told the community,“this is a very exciting time to be part of the Northwest Catholic family.”