Sample imagery for the Conard Red Wolves and Hall Titans is preliminary. Courtesy

The West Hartford Board of Education officially received and approved the choices of Conard Red Wolves and Hall Titans as the new mascots, logos, and nicknames for the town’s high schools.

When the Conard and Hall sports teams take to the fields, pools, tracks, trails, courts, and courses next fall, they will be known by new names.

Despite a last-minute lawsuit attempting to stop the West Hartford Board of Education from changing the names of their high school mascots, the Board approved the Hall Titans and the Conard Red Wolves Tuesday night, bidding adieu to the names that many still considered associated with Native Americans.

The vote to adopt the Hall Titans and the Conard Red Wolves was 5-2 along party lines, with all five Democrats supporting the changes and the two Republicans voting against them.

The rationale behind the choice of the new names was something the students “could unite behind,” a mascot or name they could engage with, Assistant Superintendent Andy Morrow said.

Before receiving the new mascot suggestions and voting, the Board met in executive session to decide whether or not to move forward in light of a lawsuit that was filed Monday by two West Hartford residents, attorney Scott Zweig – who was also a member of the Hall mascot committee – and Mary McGowan.

Following the nearly 30-minute executive session, Board Chair Lorna Thomas-Farquharson said while she could not comment on the substance of the conversation, “I personally feel confident that the lawsuit filed by attorney Zweig is unlikely to succeed based on its merits.”

Republican Ethan Goldman, who was one of two votes against the new names, said his vote was based on the process. “I actually like the names, I didn’t like the process,” Goldman said, adding that he did appreciate that the committee included some who were opposed to a mascot change.

“Regardless of how anyone feels about the Chieftains and Warriors, I think the whole community can get behind the civic engagement,” Democrat Deb Polun said Tuesday. Choosing the mascots gave students a sense of empowerment, and Polun urged the whole town “to come out and support the Titans and the Red Wolves.”

The West Hartford Board of Education voted on Feb. 1, 2022 to change the nicknames of Conard and Hall, and Hall Principal Dan Zittoun told We-Ha.com that the task they were given by the Board of Education was not just to develop nicknames, but to consider why those names were suitable.

The process of choosing the new mascot names started Feb. 9, and there were more than 200 ideas submitted, Zittoun said. The list was narrowed over time with subsequent votes and when it got down to three graphics teacher Sebastian Fortuna, a member of Hall’s committee, provided some visuals for the choices – the Hurricanes, Huskies, and Titans.

“Substantially, what came out, was the Hall Titans,” Zittoun said. “We are pretty excited about that.”

While early on the Titans did not have extensive support, the name gained momentum once the imagery and concept behind it was shared.

The prototype image presented to the Board of Education Tuesday night, was created by Hall sophomore Elizabeth Karim. It will likely be adopted as one of the designs that will be used on Hall signage, the gym floor, stationery, spirit wear, uniforms, and the turf field. 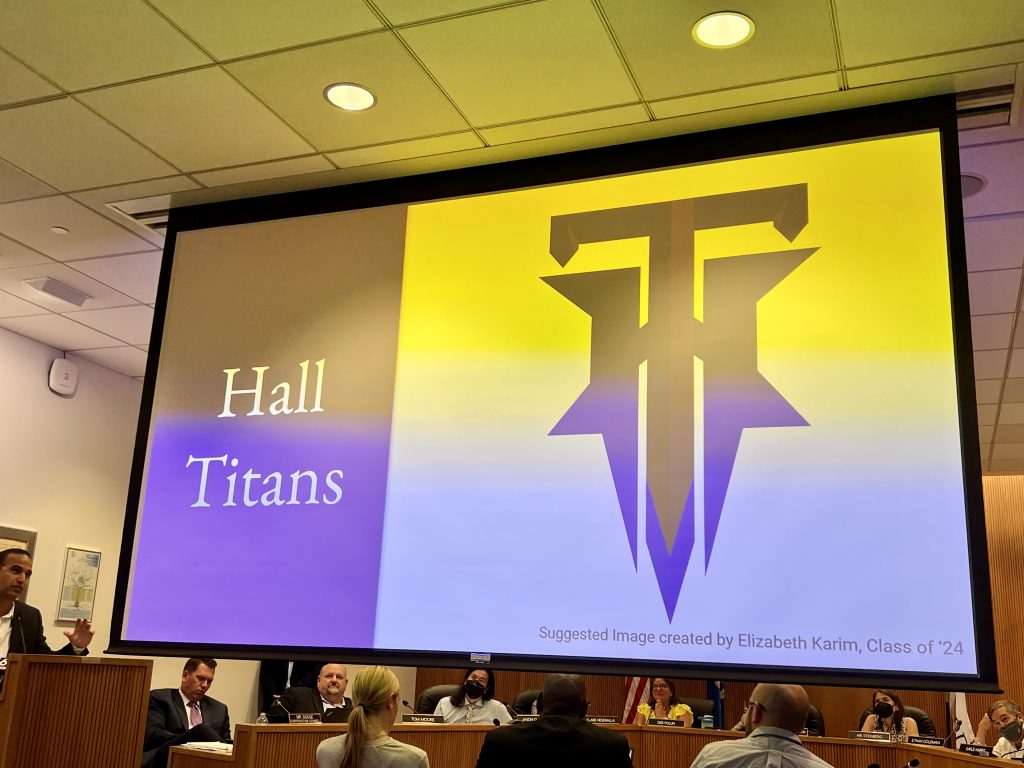 Hall Titans design presented to the Board of Education. Photo credit: Ronni Newton

Zittoun said other students will be given the opportunity to present some design ideas as well before the logo is finalized.

Statements about the Titans that were shared by students and faculty, Zittoun said, include:

At Conard the process also began on Feb. 9, with more than 200 suggestions.

“The kids did a great job of figuring out who they wanted to be,” Principal Jamahl Hines told We-Ha.com, but the process of getting there was a bit different than it was at Hall.

There wasn’t a clear front-runner or much excitement about the mascot ideas at first, Hines said.

“Our kids were just, ‘eh’ not feeling any of these suggestions,” he told the Board of Education Tuesday night. Then committee started meeting and got the kids fired up, encouraged them to use their voices.

They narrowed the choices top four because there was a tie for third, and they started voting on May 11, and then the choice – with 1,038 student votes and 114 faculty votes – was overwhelmingly in favor of the Red Wolves. 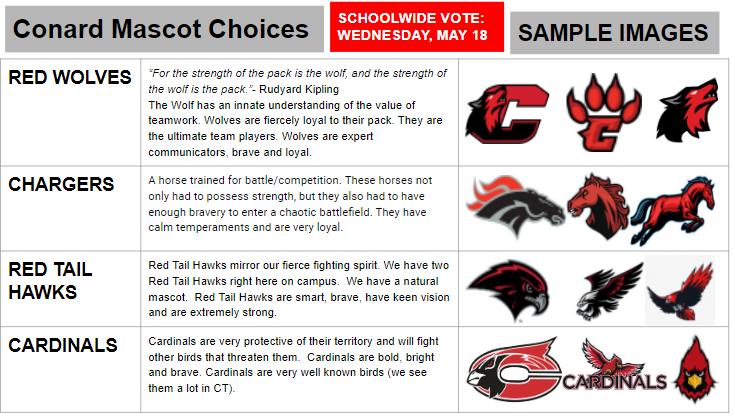 “The students on the committee, they were instrumental,” Hines said. They listened to discussions in the hallways, and got input from students at Sedgwick as well. Sophomore Emily O’Keefe played a key role as the student liaison with the committee, and students Ty and Trong Nguyen and Bau Luu, also committee members, eagerly provided sample concepts of what the logo might look like.

“The students drove it,” Hines said, assisted by the teachers on the committee as well.

The description of the Red Wolves includes many of the ideals that lined up with what has been associated with the Chieftain – “loyal, committed, team players, passionate, brave,” Hines said.

The image shared with the Board of Education Tuesday night was one used by the Clinton (Michigan) Red Wolves, and was just provided as an example. Conard’s graphics design will be created by students and refined and polished, perhaps with the assistance of a professional, Hines said. 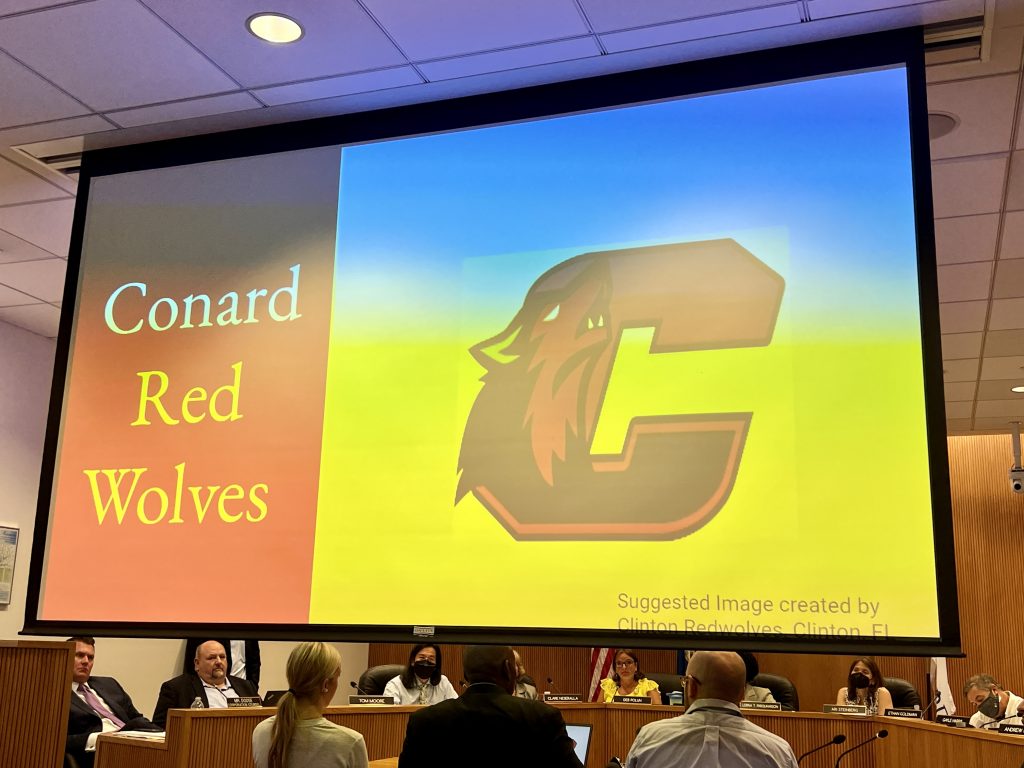 Conard Red Wolves will be the new school name. The design presented to the Board of Education was an example, and is the logo for the Clinton Red Wolves. Photo credit: Ronni Newton

“We love being part of a pack,” Hines said at Tuesday night’s Board meeting, and there are red wolves in Connecticut.

And for the student fan section, while the “Red C is gone, Hines said, “We can be the wolf den … can you hear the howling?” He said he believes the new name will “galvanize the whole community.”

“As member of the school, I’m happy that we chose Titans, and I am excited to see the new Titans in the future coming to the school,” Avi Jacobs, a member of the Hall committee, told the Board.

“When something first comes out it’s hard to say, ‘I love that,'” Zittoun told We-Ha.com. He said while changing from the Warriors has been a difficult process for many, he is confident that the community will embrace the Titans.

Morrow said his personal favorite name choice for Hall was the “Hall Monitors,” with a lizard as the mascot. That name “didn’t get the votes,” he said.

Signage in front of the schools, banners on the light poles, gym floors and turf fields, will begin to be updated throughout the summer. Uniform updates will be phased in.