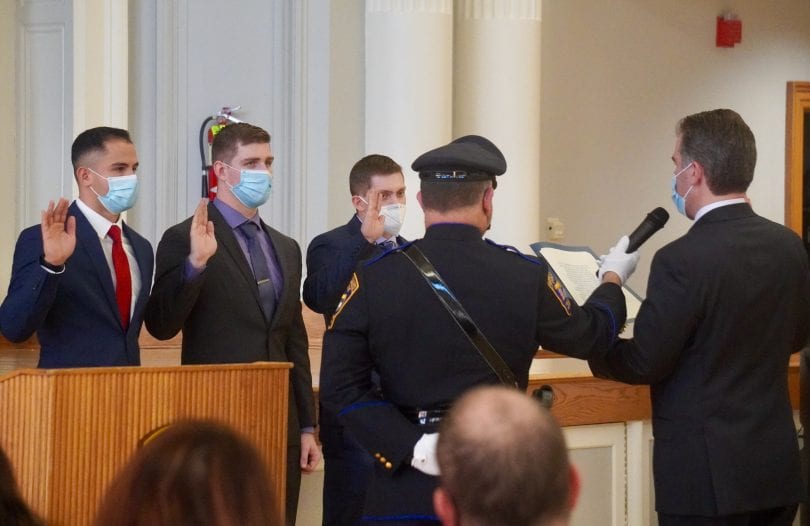 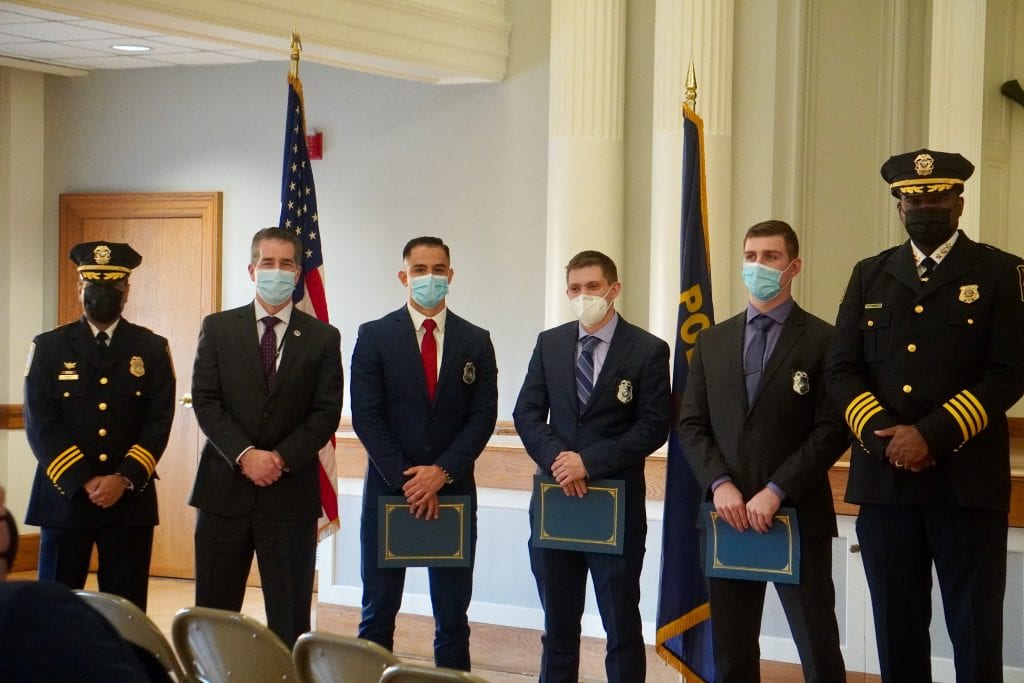 The West Hartford Police Department welcomed three new officers to its ranks Monday afternoon at a ceremony held in the Town Hall Auditorium.

Noah Velez, William Wolfe Thompson, and Jonathan Da Costa were administered the oath of office by West Hartford Town Manager Matt Hart, and all three will begin basic training at the Connecticut Police Academy in Meriden on Jan. 7, 2021.

“You’re joining one of the premier … the single-best police department in the state, and one in the nation,” Town Manager Matt Hart told the new officers. “You’re joining a police department of approximately 150 members, but you’re also joining the Town of West Hartford, a much larger organization, with approximately 450 regular employees.” Hart said one of the things the town values the most is “constituent service,” how the best service can be provided to taxpayers. 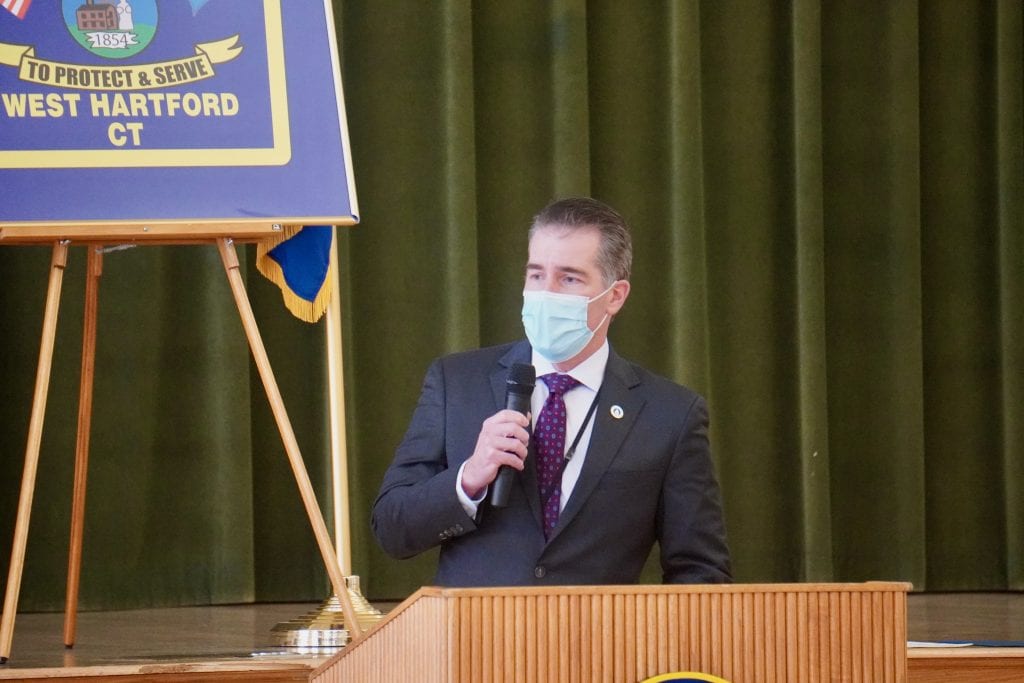 “I know that this is a challenging time for the law enforcement field, and I think that makes your commitment all the more significant,” Hart said, adding that he hopes the new officers have long and fruitful careers with the town.

Chief Vernon Riddick said he tries to think of something new and creative each time he speaks at a swearing-in or promotion ceremony. “But there’s one constant theme: commitment, service, and humility.”

While the new officers have accomplished something by choosing a meaningful profession, by being hired to work in West Hartford, what’s not true is that “you become better than anyone else.” He urged the officers to remember that they are public servants, to remain humble, and to take care of their brother and sister officers.

“As you go forward in law enforcement it’s not always all about arresting people every single day, giving out tickets every day,” Riddick said. “There’s something called discretion.” A robot can give out tickets, but taking time to deal with people who may be having the worst day of their lives is an enormous responsibility, and one that should not be taken lightly. 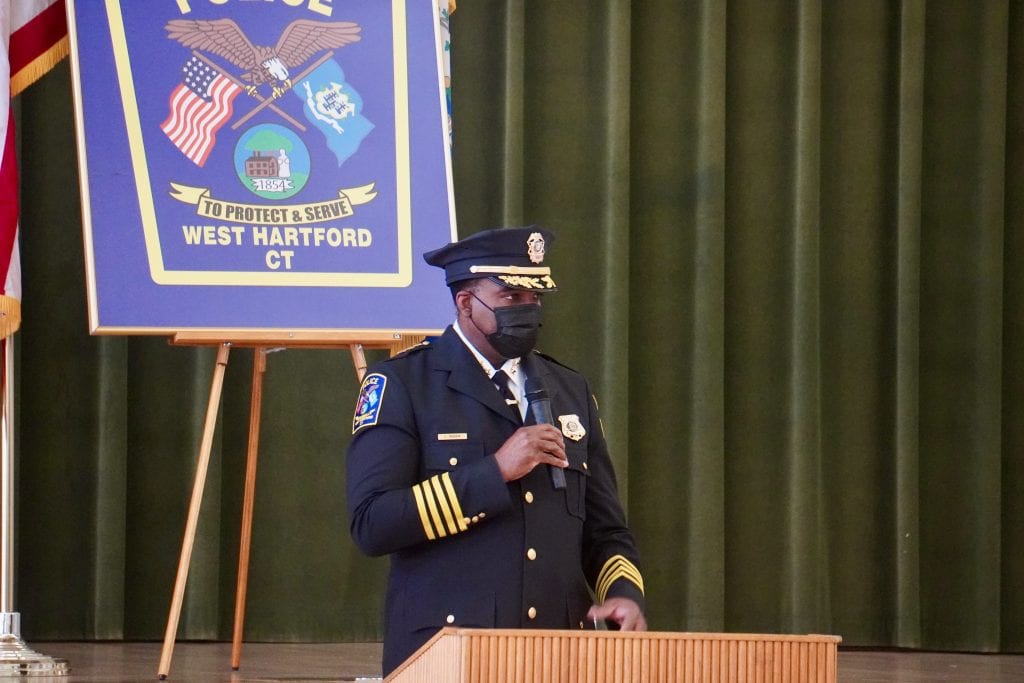 Riddick also thanked Hart for his continued commitment to the department, while acknowledging the budget challenges in the coming year. With the hiring of the three new officers, the department still has three vacancies, he said. 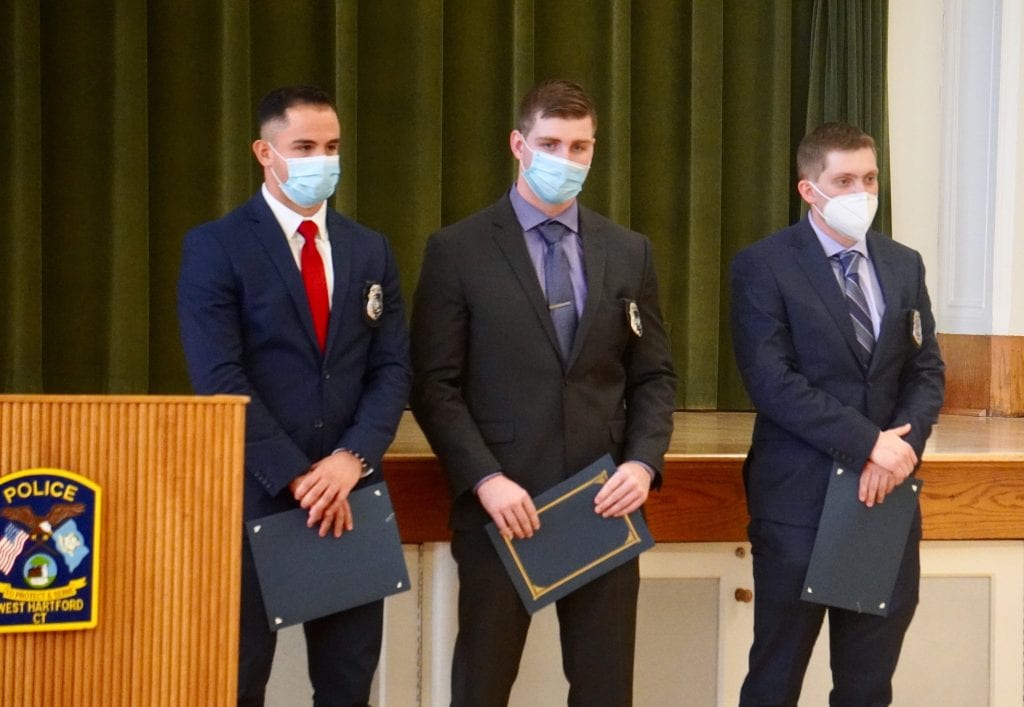 Velez, a native of Norwalk and graduate of Brien McMahon High School, has had a longstanding interest in law enforcement and served with the Norwalk Public Safety Cadets, achieving the rank of captain.

“During his tenure as a police cadet, Noah ran a gun lock program, assisted with numerous drug and alcohol programs for children and adults, and completed over 250 hours of community service,” Terra said.

Thompson grew up on the Mohegan Tribal Reservation in Montville, CT, and graduated from Montville High School, where he played football and was a member of the varsity track team, Terra said.

He attended crane operating school in Georgia, and worked on major construction projects in Georgia, Florida, and Connecticut.

Da Costa is a native of Newington, CT, and graduated from Newington High School where he was an honor roll student, played football, and was a four-year member of the wrestling team.

After graduation, he enrolled in the nursing program at Capital Community College, and has served as a coach for the Newington Blackhawks Youth Wrestling Program, the New Britain Twisters Youth Police Athletic League Wrestling Team, and the Newington High School wrestling team, and has also mentored youth in Newington as well as other area towns, Terra said. 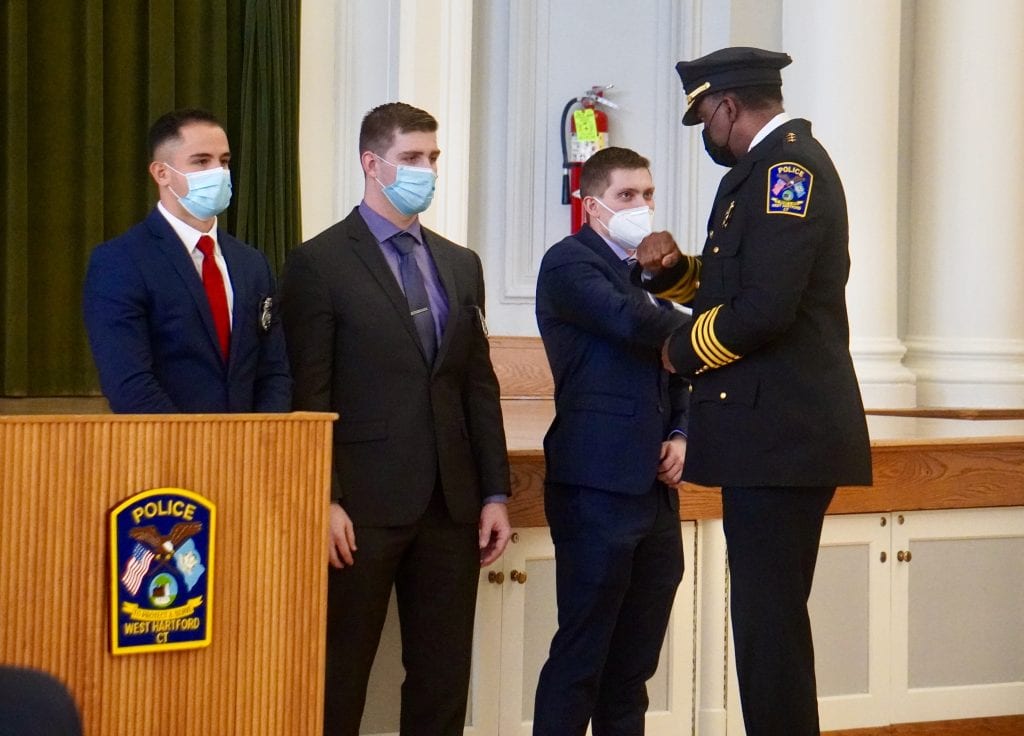 Hart administered the oath of office to the new officer, and they were pinned with their new badges by Riddick.

Lt. Eric Rocheleau, who heads the department’s Training Division and served as emcee of the swearing-in event, presented the three new officers with their own copies of the oath and their rights card – which also includes a copy of the oath. He asked them to understand the importance of all parts of the oath.

“The oath incorporates the police department’s mission statement,” Rocheleau said. “Within the oath it mentions providing professional police services through active cooperation within our community. Now more than ever it is so important.”

After graduating from the academy, the new officers will attend the West Hartford Police Department’s 12-week Field Training Officer program under Rocheleau’s direction before assuming their first assignments.

Due to COVID-19 restrictions, attendance was limited to a small number of family members, and the swearing-in was held in the the auditorium’s large space to allow for ample physical distancing. 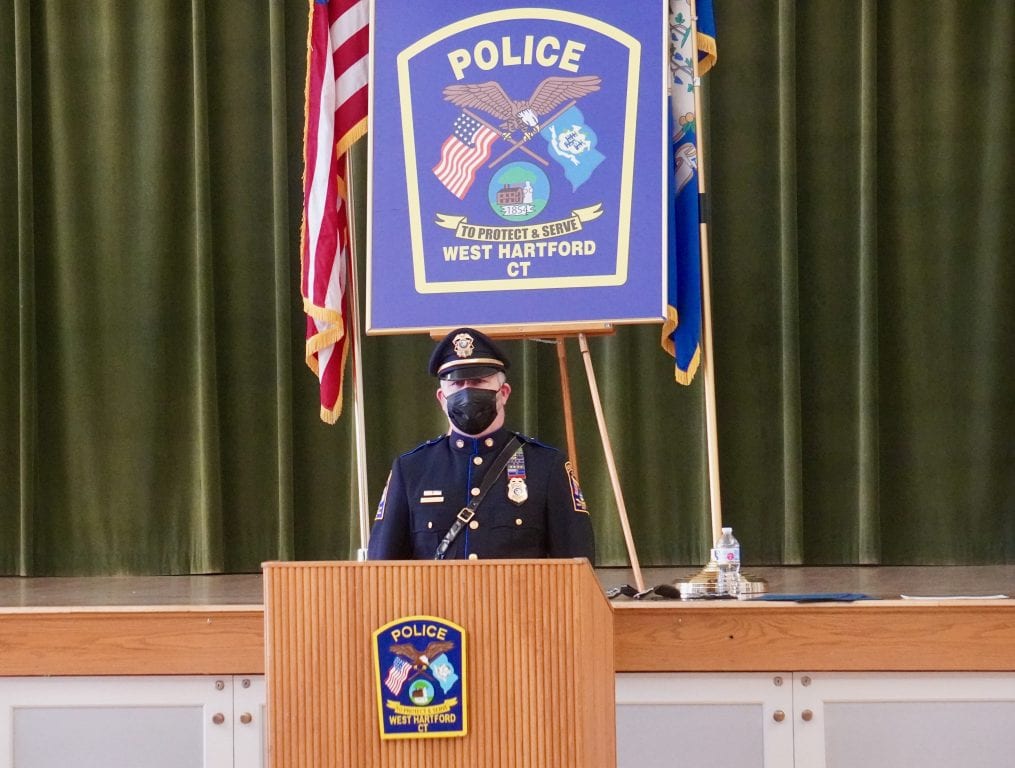 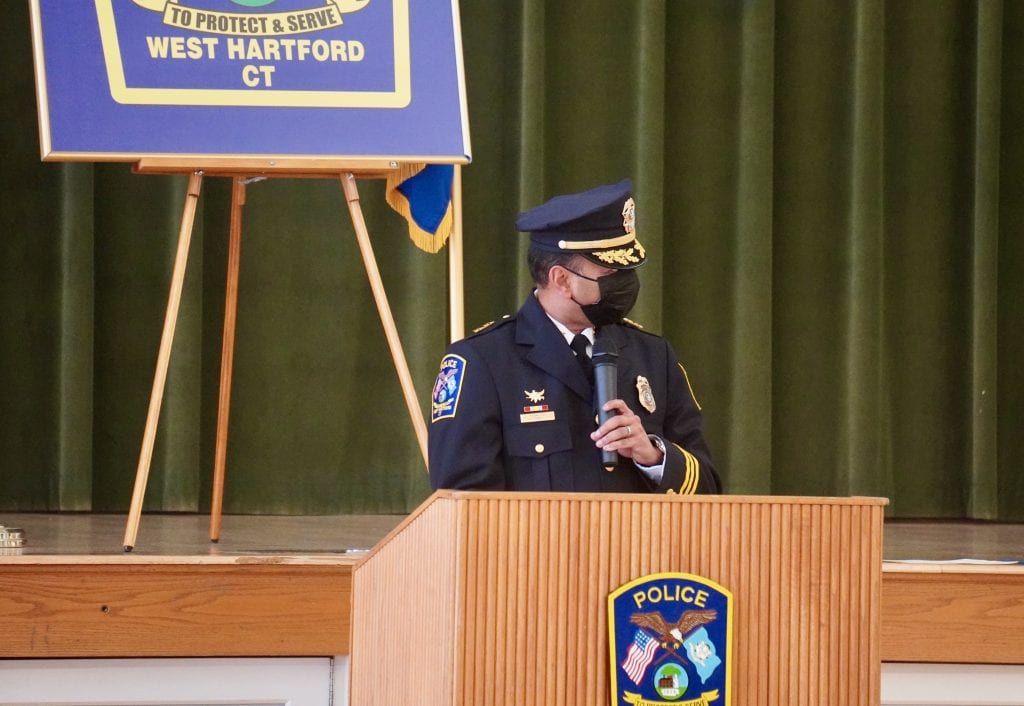