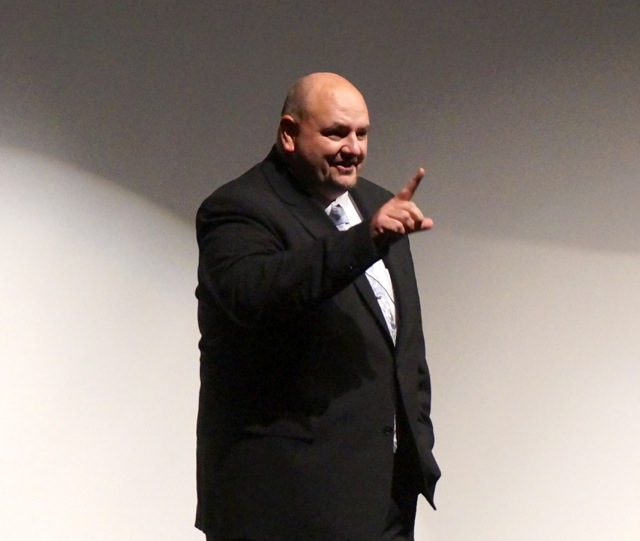 Tom Moore, who took over the role as superintendent of West Hartford Public Schools on July 1, 2014, was the keynote speaker at Monday’s convocation for teachers.

The entire community of teachers from all of West Hartford’s public schools gathered together Monday morning in the Conard High School auditorium for “A Celebration of a New Year 2014-2015,” the district’s annual convocation ceremony.

Braeburn Elementary School was this year’s host for convocation, and approximately 50 Braeburn students led off the celebration with a theatrical and musical performance of “Learning and Growing.”

The Braeburn performance received exuberant applause and a standing ovation, as did speeches by Board of Education Vice Chair Mark Overmyer-Velazquez, Braeburn graduate Emma Sibson who presented “Insights of a Student,” and 2014-15 Teacher of the Year Brittney Zieller who delighted the audience with a teacher/student-oriented video adaptation of Dr. Seuss’ “Oh, The Places You’ll Go.”

Duffy Elementary School teacher Tien-Tien Chen, who has known Tom Moore since she was his AP European History student at Conard more than a decade ago, enthusiastically introduced the keynote speaker.

Motivation was the theme of the morning, and Superintendent of Schools Moore, who assumed his new role following the retirement of Karen List on July 1, 2014, decided to give the keynote address himself rather than hiring a professional performer. In past years, authors, comedians, and other well known figures have been brought in to rally the teachers for an exciting new year.

Moore, who spoke extemporaneously, was as poised as any professional, and as the father of two West Hartford Public Schools students and someone who has spent his entire career working for the district, brought an authentic passion to his rallying presentation.

“This is really beyond my best dreams, getting to lead this district,” Moore told the audience. However, even though he is an administrator, Moore said that in his heart and mind, “what I am is a teacher.” And a teacher, he said, changes the lives of his or her students.

Moore chuckled when he told the audience that the Board of Education picked the right person for the job, but added that he didn’t mean that as a joke. He pledged not to let anyone down.

“What an assessment and scores on a sheet will never tell us is what kids are going to do,” said Moore. He said he knows that morale was low at the end of last year, as teachers worried about Common Core, new evaluations, and myriad forms and other requirements. He urged them not to lose sleep about paperwork, or anything other than giving the kids what they need to succeed.

Moore reminded the teachers to never lose sight of their importance in the lives of their students. “You don’t teach subjects every day, you teach people every day,” he said.

“The answers are right  here,” Moore said, pointing to himself and everyone in the room.

“Clear Paths. Bright Futures. No Limits.” That’s Moore’s educational philosophy, and it’s now printed on his business card and the cards of everyone else in the district. He explained how he developed that philosophy and as a new teacher learned that every kid needs to be challenged and “pulled” not “pushed.”

“We need to meet kids where they are and bring them up. That’s what my educational philosophy means. ‘Clear’ is a verb,” he said. “Good enough is not good enough.”

The processes are all in place in what Moore called an already great district. His role, and the role of the administration, will be to support the people who directly impact the kids. “Your kids are your initiative,” Moore told the teachers. “Let me worry about the rest.”

As Moore concluded his presentation he showed a video he created set to Bruce Springsteen’s “Dream Baby Dream.”

“You have one life, I have one life, to make a difference in the world … I have so much faith in this district,” Moore said. “West Hartford will be as it always has been – great. It will get better on your backs.”

“Remember that the kids in front of you are a miracle,” said Moore. “Love your kids and be great every day. They deserve it.”