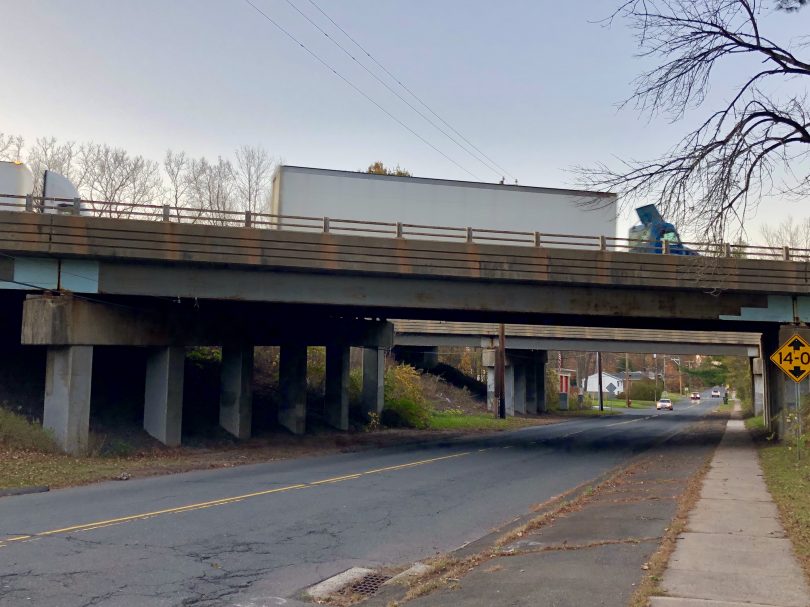 This double-span bridge over Berkshire Road in West Hartford (viewed looking north) is one of the projects being considered for a toll as part of Gov. Ned Lamont's CT2030 plan. Photo credit: Ronni Newton (we-ha.com file photo)

Democratic leaders said they hope to finalize a tolls bill at a meeting Tuesday afternoon and schedule a public hearing next week.

House and Senate Democratic leaders said they hope to finalize a tractor trailer tolls bill at a meeting Tuesday afternoon with the administration of Gov. Ned Lamont, then schedule a public hearing for next week on Lamont’s 10-year, $19 billion infrastructure plan.

The leaders originally said they planned to make the legislation public Tuesday, but they expect some revisions after the meeting, meaning the bill’s public release is unlikely before Wednesday.

“We have a meeting this afternoon to hammer out the details,” Senate President Pro Tem Martin M. Looney, D-New Haven, said Tuesday morning.

House Speaker Joe Aresimowicz, D-Berlin, said in a separate interview he is unaware of major sticking points on draft language that has been negotiated by the co-chairs of the Transportation Committee, reflecting the concerns of their caucus members.

“It’s been going through the chairs.This is our first time getting together,” Aresimowicz said. “I think it’s just a matter of us getting in the room as leaders.”

Aresimowicz said he expected a draft to become public Wednesday. Looney hedged on a date for a vote, saying it would be depend on the availability of lawmakers at a time of year when they are not normally in session.

“I think both chambers have to do a careful head count,” Looney said.

The leaders have committed to a five-day public notice before a hearing on the much-revised plan to use some form of tolls as a major element of financing CT2030, the governor’s plan to restore highways and bridges to a state of good repair and improve commuter rail.

Max Reiss, the governor’s communications director, said there is a consensus on truck tolls in both chambers, but few details remaining.

“We look forward to getting over the goal line,” he said.

One of the concerns raised by some rank-and-file Democrats is legislative language barring the Department of Transportation from subjecting passenger cars to tolls, as Lamont first proposed in February as part of a broader tolling scheme. Some Democrats want language that makes clear to voters that car tolls would not be permitted.

The revised version would charge tolls only on tractor trailers at a dozen highway bridges in Connecticut.