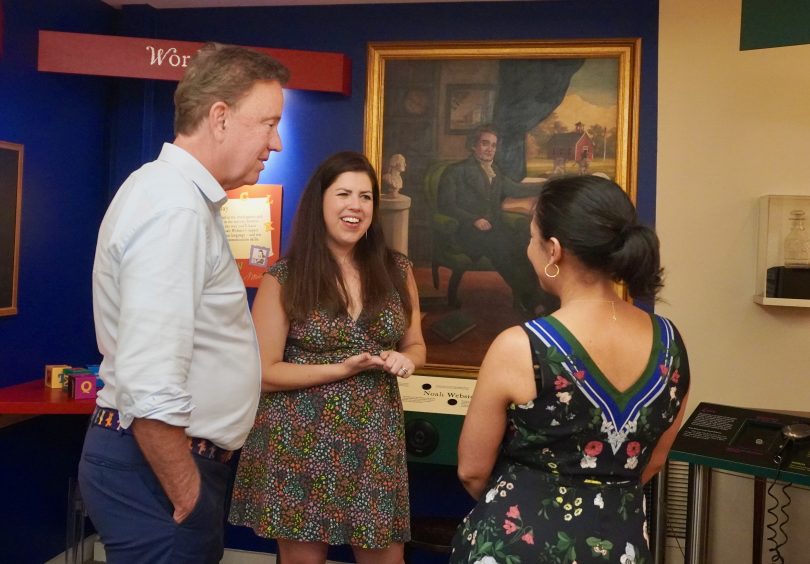 Several projects at the Noah Webster House & West Hartford Historical Society will benefit from funding approved by the State Bond Commission on Friday. 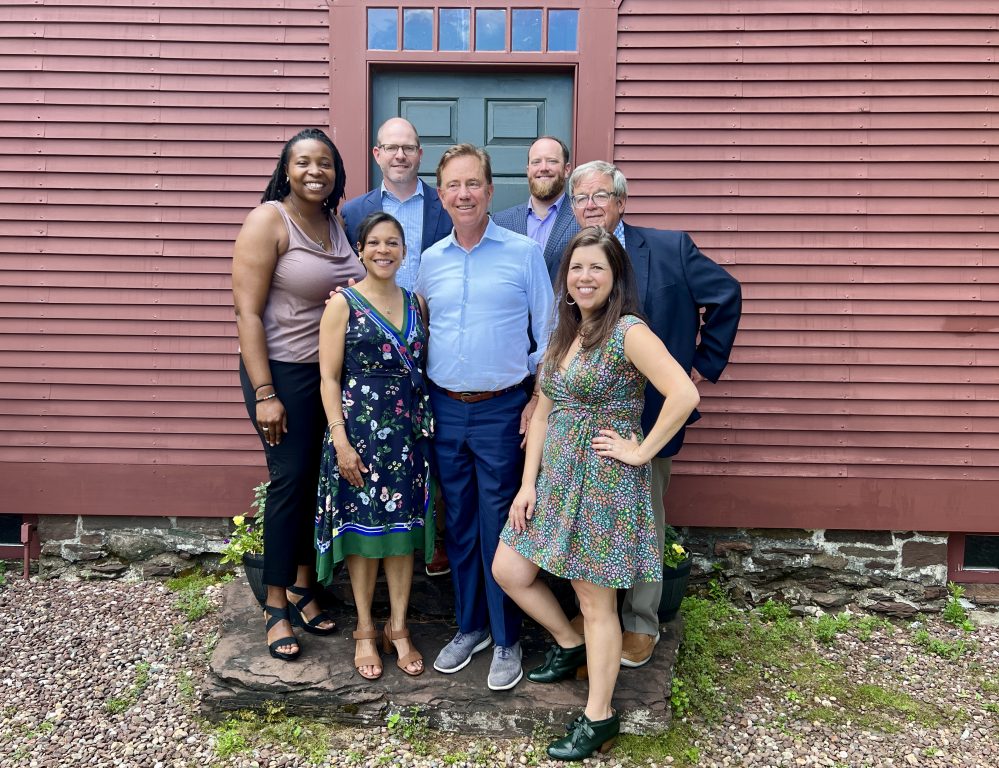 Hours after presiding over a meeting of the State Bond Commission, which on July 29 approved more than $800 million in funding for transportation, infrastructure, economic development, and other programs, Gov. Ned Lamont visited one of the organizations which will greatly benefit from the state support.

The Noah Webster House & West Hartford Historic Society will receive $415,000 from the state – an allocation which is transformative for the nonprofit, Executive Director Jennifer DiCola Matos said as she enthusiastically gave the governor a personal tour of the historic site in West Hartford and spoke about the important legacy Noah Webster left not only for West Hartford and the state, but far beyond. 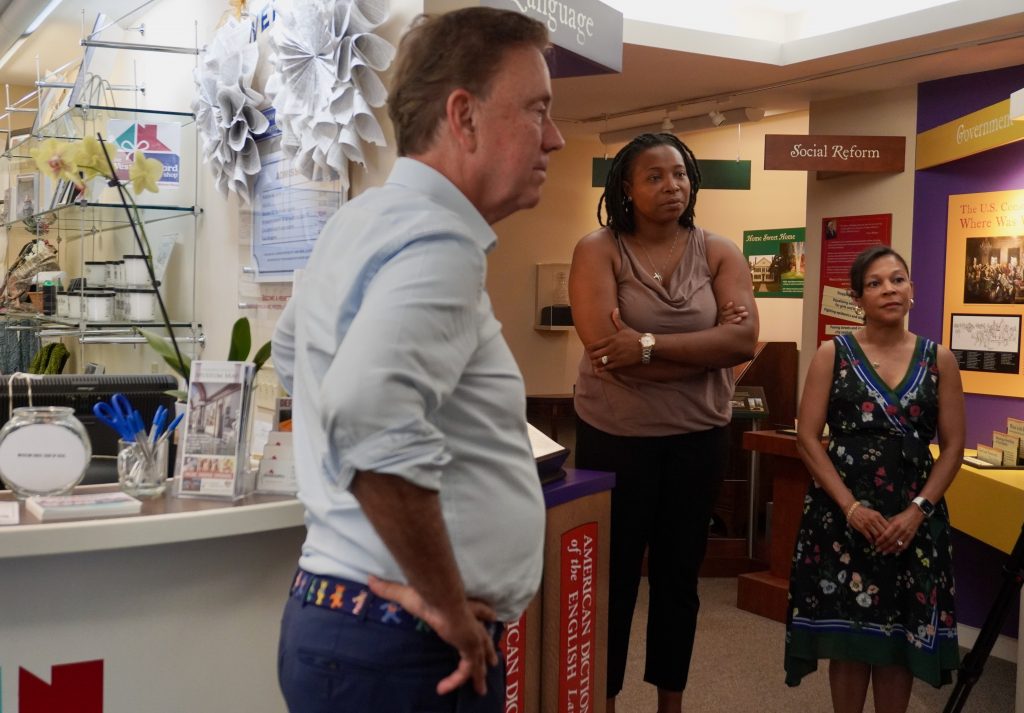 “The bond funds we will be getting will be to preserve our collections,” Matos told Lamont, carefully handling and showing the governor some of the artifacts which include original editions of some of Webster’s best known publications. 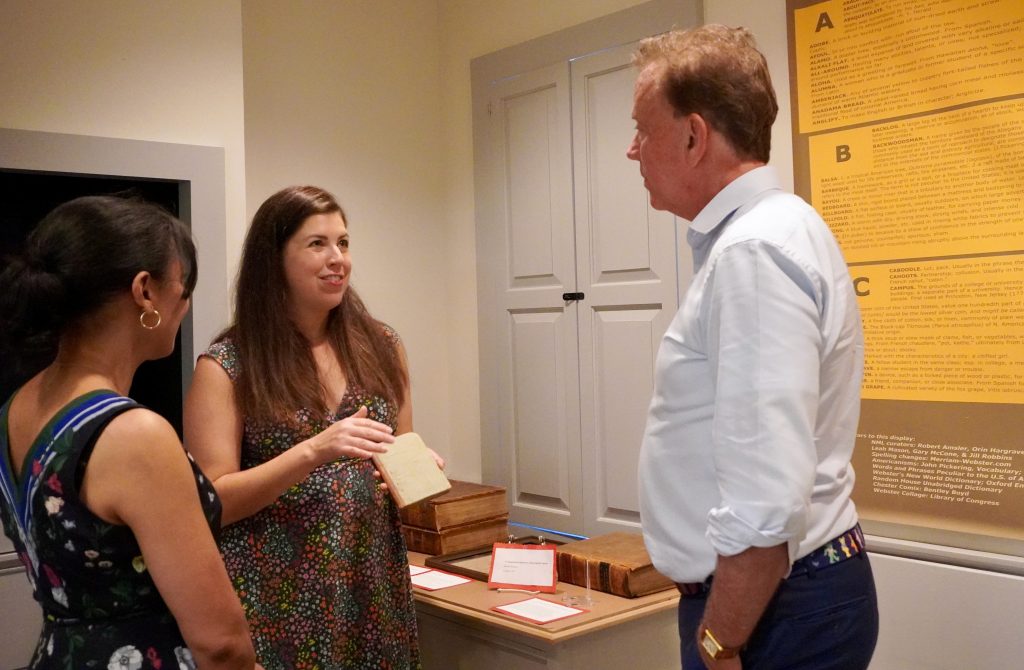 Matos showed the governor the actual room where Noah Webster was born in 1758, when West Harford was known as the “West District” of Hartford, as well as other bedrooms and the kitchen of what was originally a four-room farmhouse that was donated to the town in 1962 and has been operating as a museum since the late 1960s.

Webster undertook the creation of a dictionary, “to unite the country,” Matos told the governor, “to create an American language that would unite us.”

While not a “Founding Father,” Webster was “the founder of American English,” Matos said. He was also a champion of federal copyright law. 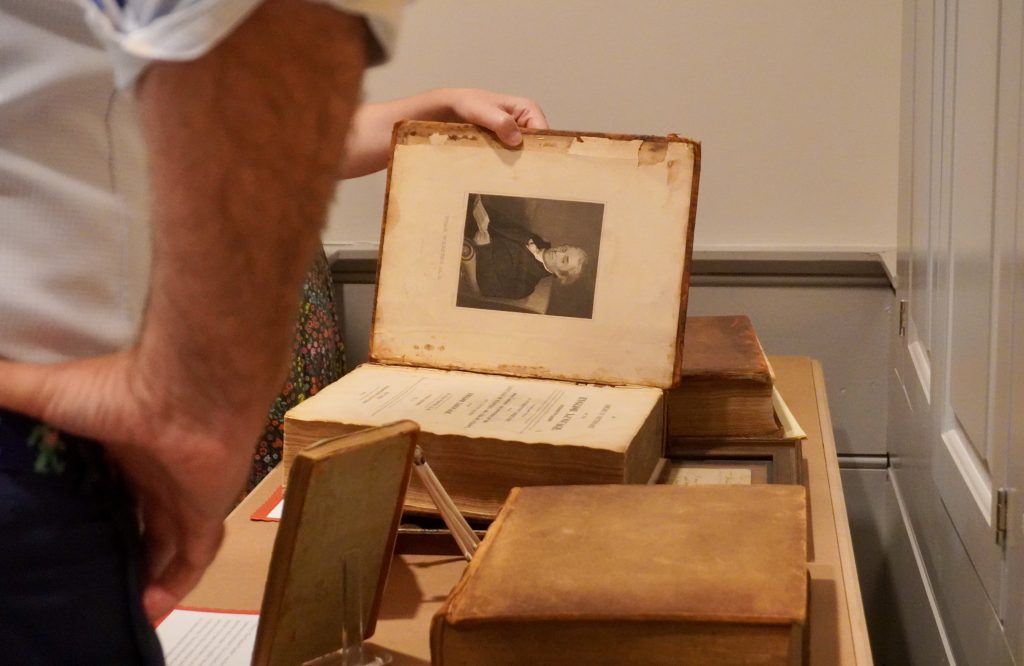 Webster created “A Grammatical Institute of the English Language,” which had a blue cover and “colloquially became known as the “Blue Backed Speller,” Matos said. The namesake of Blue Back Square, the Blue Back Speller, which dates to 1783, was used by generations of school children to learn spelling and punctuation.

Webster’s first dictionary, “A Compendious Dictionary of the English Language,” was published in 1806, included “American spelling” of words as well as uniquely American words that were not included in existing British dictionaries. He eventually followed with the “American Dictionary of the English Language,” a much more comprehensive dictionary published in 1828 – which contained about 70,000 words, took more than 20 years to complete, and was written by hand. That dictionary also included definitions of flora and fauna native to North America. 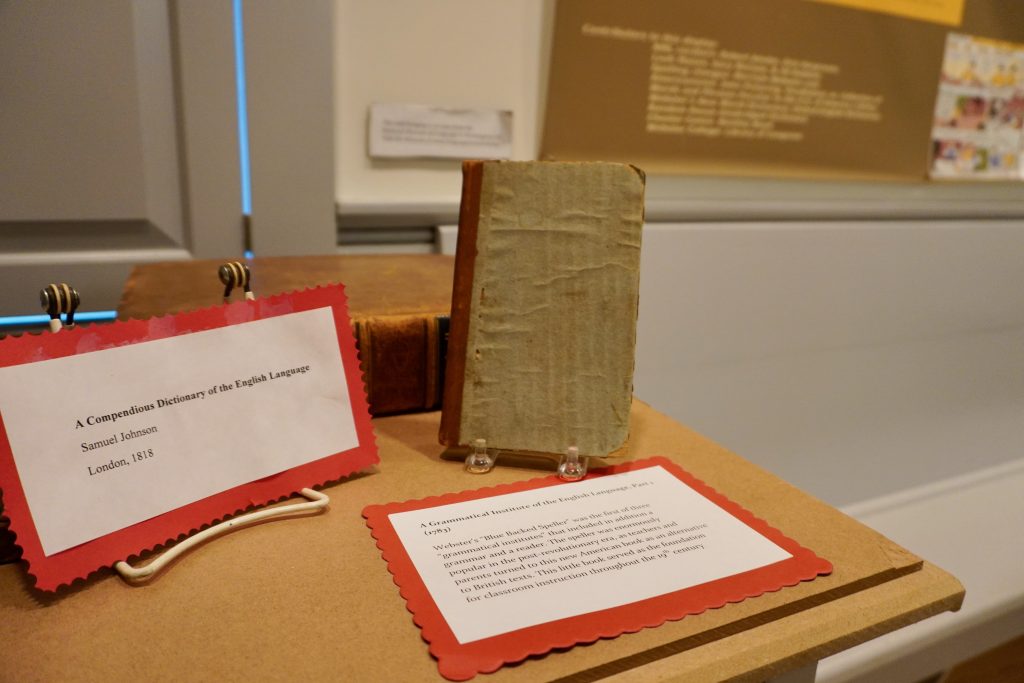 Following his tour, Lamont declared that Noah Webster’s history is vitally important, and suggested that all elementary school students in the state should see the museum. “I love it. Everybody should visit.”

The museum plans to use the funds awarded by the state to construct an archival shelving system that will complete the West Hartford History Center. Funds will also provide support for renovations to the orientation area and the West Hartford Gift Shop – a social enterprise business featuring local products that will provide future revenue for the nonprofit. Earlier this year the Noah Webster House – which was greatly impacted by the COVID-19 pandemic due to the lack of visitors and inability to host in-person field trips – also received a grant of $100,000 from the state through the American Rescue Plan Act of 2021. 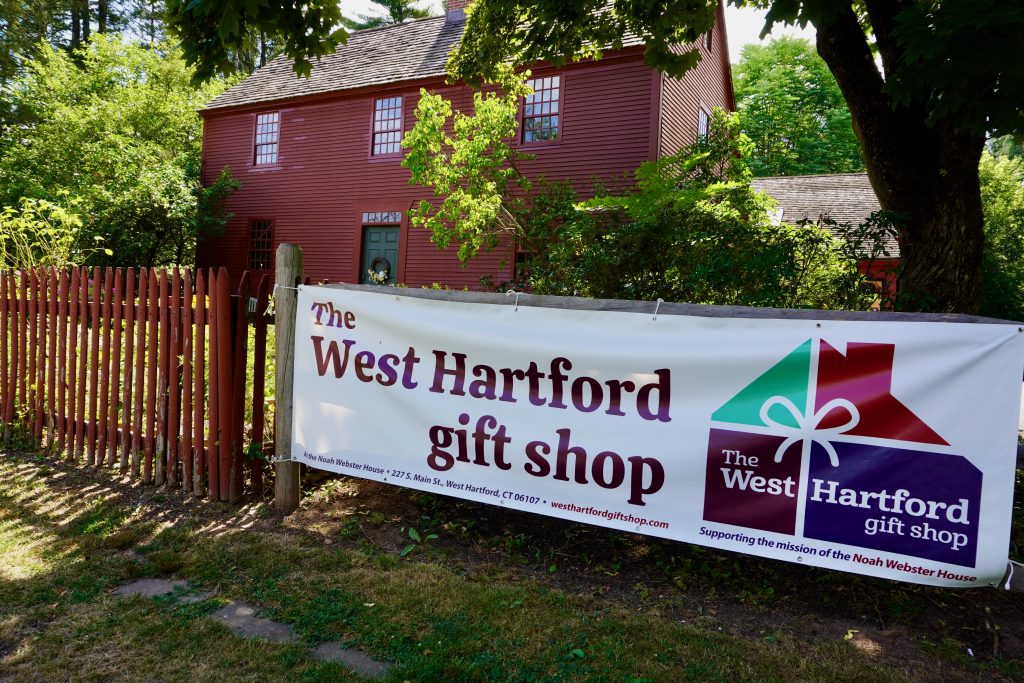 Exum said that the Noah Webster House will be in the 19th District, which she represents, once statewide redistricting takes effect as of the November 2022 election. But she said efforts to procure funds for the nonprofit were also supported by state Sen. Derek Slap, and state Reps. Jillian Gilchrest and Kate Farrar. “We approach all as a delegation,” Exum said of working to get the proposal included on the Bond Commission agenda.

A total of $8,906,664 for West Hartford-specific projects were approved by the State Bond Commission on Friday. Other projects include improvements to Park Road’s infrastructure, support for affordable units at West Hartford Fellowship Housing on Starkel Road, work on “operational lanes” for a portion of I-84 in West Hartford that is currently under construction, and funds for the completion of Phase 6 of the Trout Brook Trail. 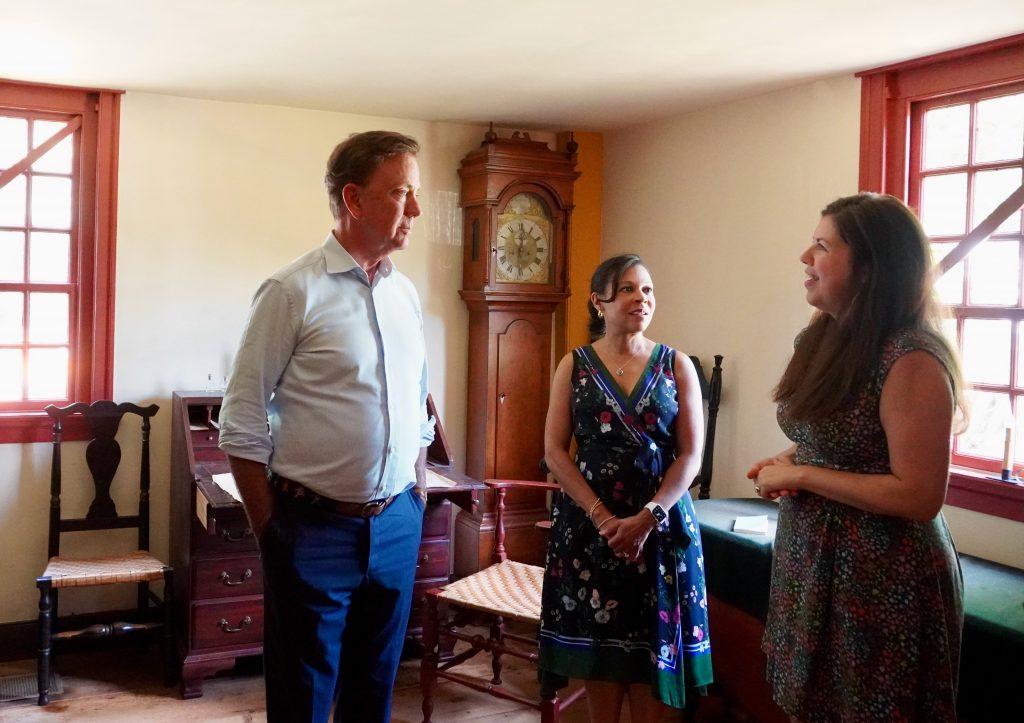 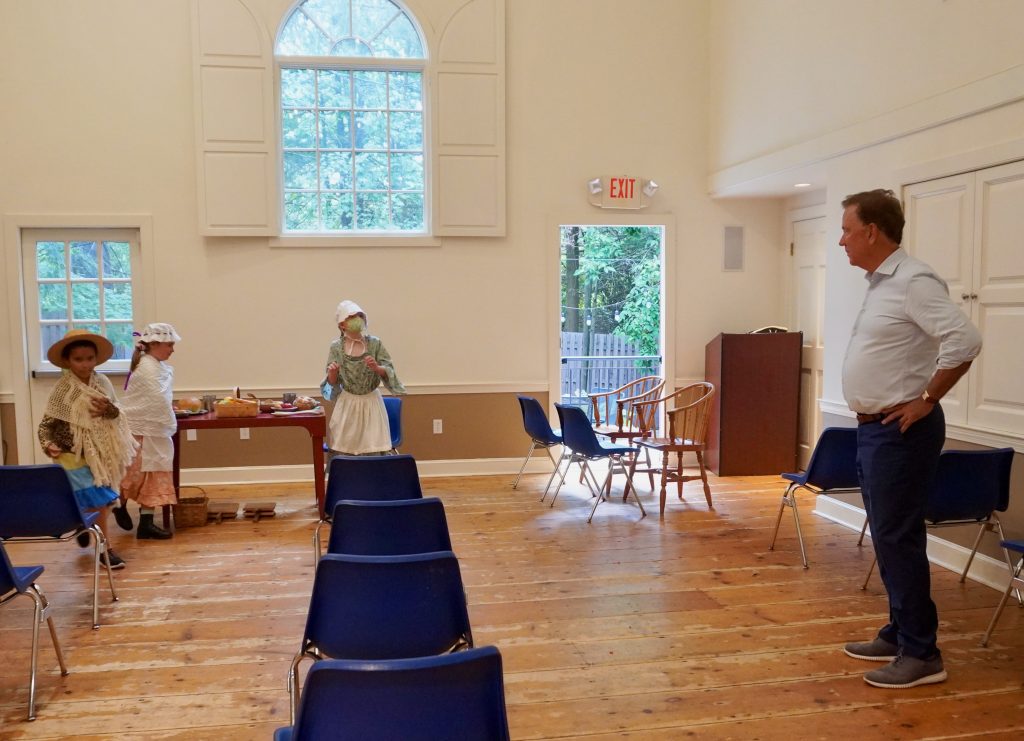 While at the Noah Webster House, Gov. Ned Lamont watched some campers rehearsing a play they planned to put on later in the day. Photo credit: Ronni Newton 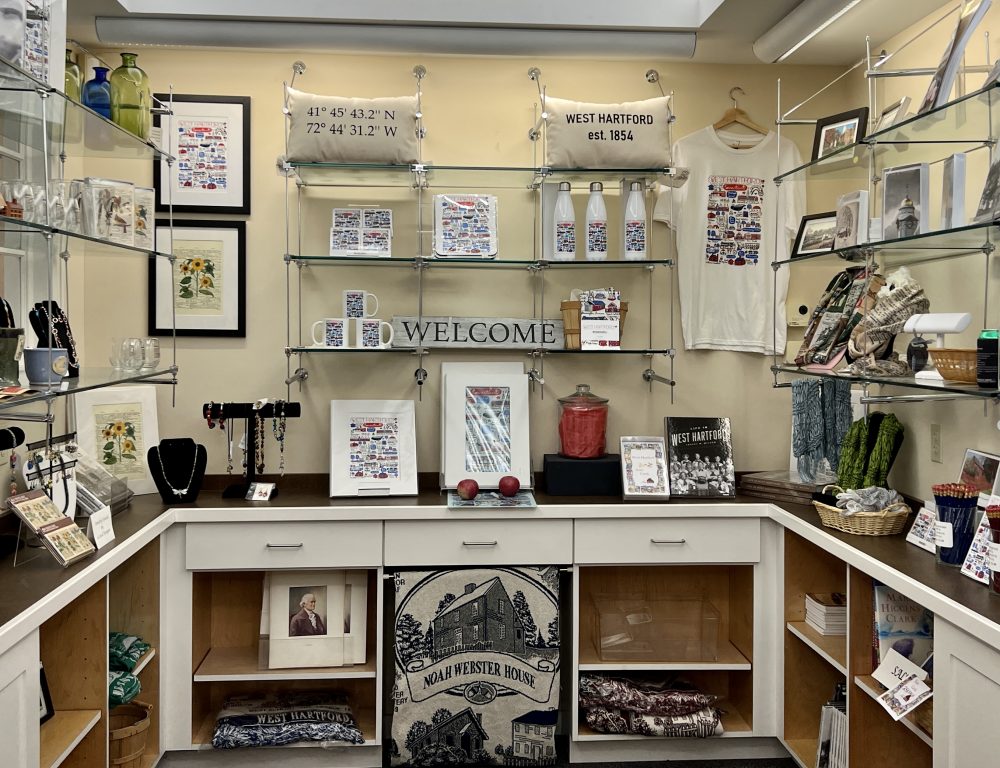