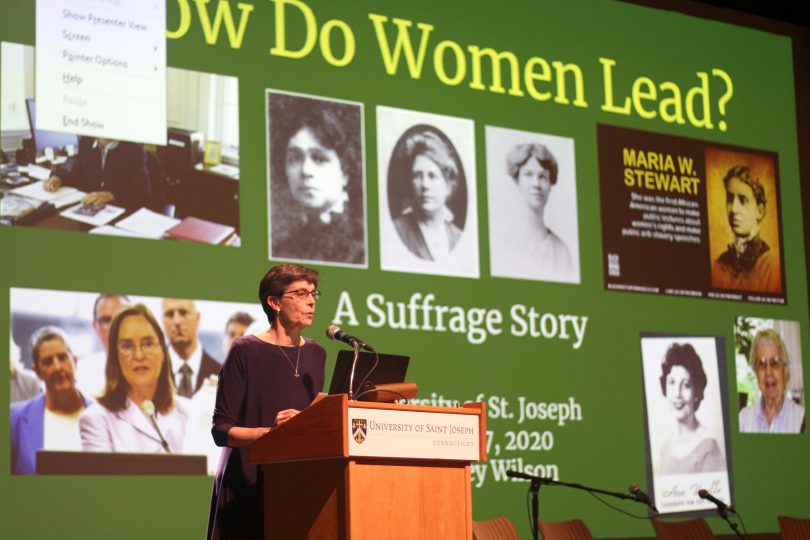 West Hartford Historian Dr. Tracey Wilson will provide a Woman’s Suffrage centennial talk on the 100th anniversary of woman’s suffrage in Connecticut in a program hosted by the Noah Webster House in collaboration with the League of Women Voters of Greater Hartford and West Hartford Community Interactive.

The Noah Webster House & West Hartford Historical Society, the League of Women Voters Greater Hartford, and West Hartford Community Interactive invite guests to attend a virtual lecture commemorating the centennial anniversary of woman’s suffrage and the 100th anniversary of the founding of the League of Women Voters on Tuesday, Sept. 15, 2020, at 5:30 p.m.

Sept. 15, 2020 is a significant date as it marks the 100th anniversary of Connecticut Gov. Holcomb calling the legislature into session to add Connecticut’s name to the list of states that approved the 19th Amendment.

During a Zoom webinar, West Hartford Town Historian Dr. Tracey Wilson will speak about the history of the Connecticut woman’s suffrage movement and the League of Women Voters through the lives of Hartford-area women and the elected officials. While Connecticut did not ratify the 19th Amendment before it became part of the Constitution, the suffrage movement developed leaders who worked on related issues of equality.

In “Celebrating the 100th Anniversary of Woman’s Suffrage in Connecticut,” Dr. Wilson will focus on the involvement of the suffrage activists in issues of child labor, the poor, elected office, representation, equality, and justice as she analyzes their organizing tactics and strategies. A Q&A period will follow Wilson’s presentation.

This event is free and open to the public. Register for the Zoom webinar at https://bit.ly/3jGp5NQ. Registrants will receive an email confirmation with Zoom log-in information.  The presentation will also be taped and aired on West Hartford Community Interactive’s cable channels as well as on YouTube.

Dr. Tracey Wilson is the Town Historian of West Hartford. She taught history in the West Hartford Public Schools for over 35 years, including a course on local history at Conard High School. She is the author of the recently published book Life in West Hartford, a compilation of articles on the history of the town. Wilson earned her B.A. and M.A. degrees from Trinity College, and her Ph.D. in history from Brown University.

“Celebrating the 100th Anniversary of Woman’s Suffrage in Connecticut,” is a collaboration between the League of Women Voters Greater Hartford, the Noah Webster House & West Hartford Historical Society, and West Hartford Community Interactive.

The League of Women Voters (LWV) was established in 1920, the same year the 19th Amendment to the U.S. Constitution guaranteed women’s suffrage. LWV, a non-partisan, political organization, encourages informed and active participation in government, works to increase understanding of major public policy issues, and influences public policy through education and advocacy. LWV is strictly non-partisan; it neither supports nor opposes candidates for office at any level of government. At the same time, LWV is wholeheartedly political and works to influence policy through advocacy. It is the original grassroots citizen network, directed by the consensus of its members nationwide. LWV conducts non-partisan debates and develops voters’ guides for elections at local, state and national levels.

The Noah Webster House & West Hartford Historical Society is a cultural destination where citizens can learn to understand and appreciate the past. The museum preserves the birthplace of Noah Webster, the founding father, educator, author, and lexicographer who taught generations of Americans what it means to be American. This National Historic Landmark is also a repository for the history of West Hartford, the community that molded Noah Webster’s future and is still thriving over 250 years later. The historic house and exhibit spaces are open daily 1 p.m. until 4 p.m. For information on the museum’s extensive school and public programs, please visit www.noahwebsterhouse.org or call (860) 521-5362.

The museum would like to thank the Hartford Foundation for Public Giving for their continued support.