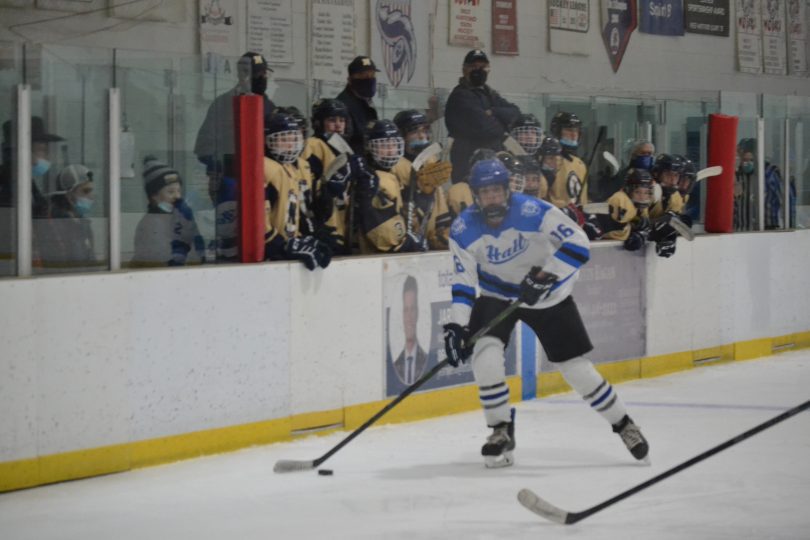 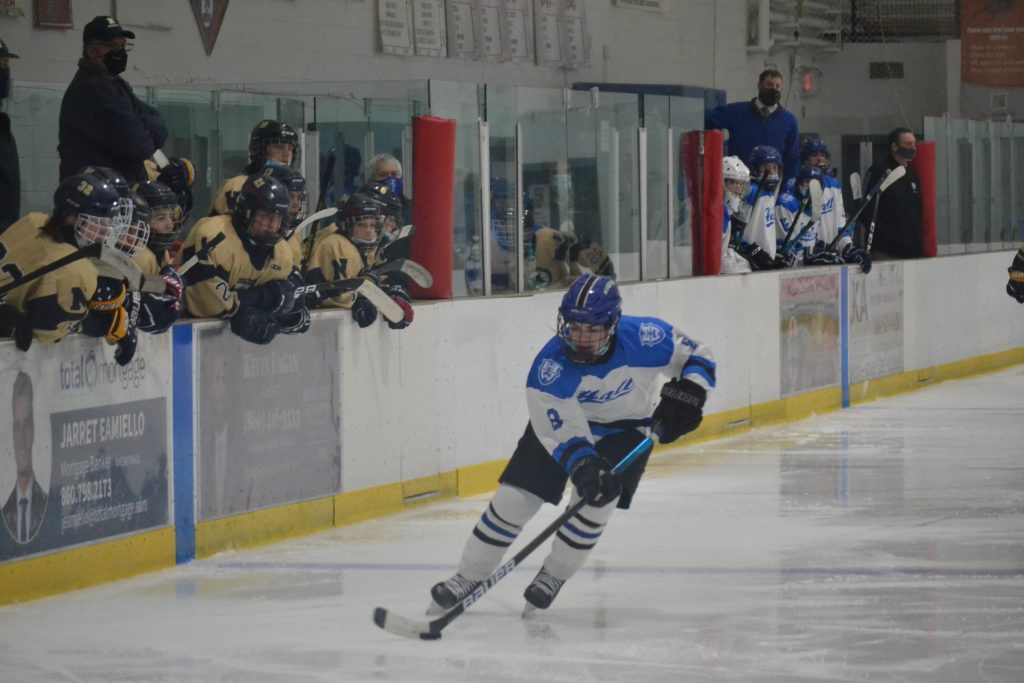 It was a battle of wills Wednesday night when the Hall hockey team hosted Newington Co-op’s squad. Both teams were off to strong starts – the Warriors coming into the game with a 3-1 record and the Nor’easters at 5-1 – with Newington having turned in three shutouts on the season.

When the buzzer sounded, Newington, the top team in Division III, got the 4-2 win and improved to 6-1.

Early on Newington had the better possessions and chances to score, but Hall’s Tanner Cohane had a good scoring opportunity early when he backhanded a rebound on net, only to have goalie Jeremy Wagner kick it away. 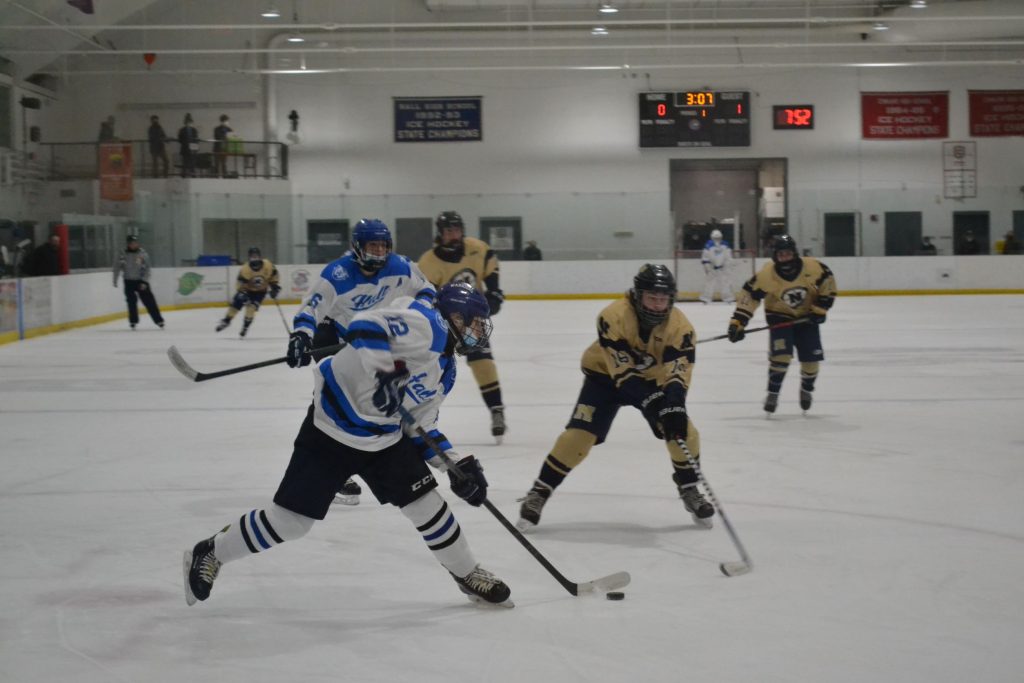 Newington would strike first, 9:09 into the opening frame. Tanner Jorczak would convert a nice pass from Kyle Klimas that went across the front of the net before being knocked home. Hall had its best chance when left wing Nikolai Ellavsky rang one off the crossbar behind Wagner.

After the first period the momentum favored the visitors who had found more opportunities to score.

Early in the second it looked like Newington would continue that dominance when Mike Deegan was stopped cold by Hall goalie Aeden Mallett. Deegan found himself all alone in front on a pass from teammate John Grimm. 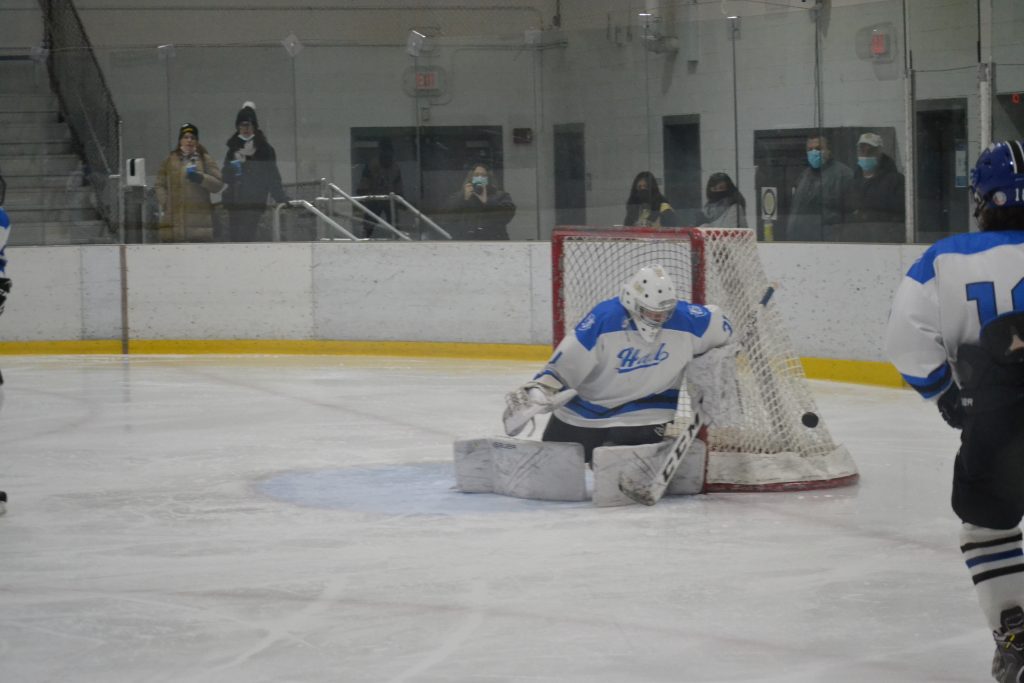 Shortly after that play, Hall would get its first goal of the game at the 5:43 mark of the second. Ben Gerken drilled a slapshot past Wagner from a Matt Ganey pass to tie it at 1.

Four minutes later Ganey and Gerken would get involved in the scoring again. The play started when Gerken out-hustled two Newington defenders to get the puck along the boards behind the Nor’easter net. He dug out the puck, and Rafael Fichandler picked it up and found Ganey in a group in front, and the senior captain would convert the play to give Hall its first lead at 2-1.

The momentum turned on that second goal, and the efforts of the line of Hudson Hollander, Owen Miller, and Adam Ezovski as the trio’s hustle led a turnaround for Hall. But that momentum came to a crashing halt with just 26.7 seconds to play in the second. Newington’s Evan Oliver rushed the Hall net with a defender on him, and his soft shot managed to find space between Mallett’s pads as the goalie moved right to left.

The game would all come down to whoever played the better final 15 minutes. Both teams had shown that they deserved the win, but it was Newington who would own the final stanza.

Less than 5 minutes in, Tyler Leavitt and Jack Reynolds worked a textbook give-and-go to move the puck from just outside the defensive zone and into the attacking zone, and Reynolds made no mistake blistering a shot high stick side to put the Nor’easters back in front 3-2.

Less than a minute later, Newington had a golden chance to pad its lead when it went on the powerplay and the opportunity was not wasted. This time it was defenseman Braeden Humphrey finding Grimm, who snapped off the high shot that beat Mallett and made it 4-2 with less than 30 seconds to go in the man advantage. 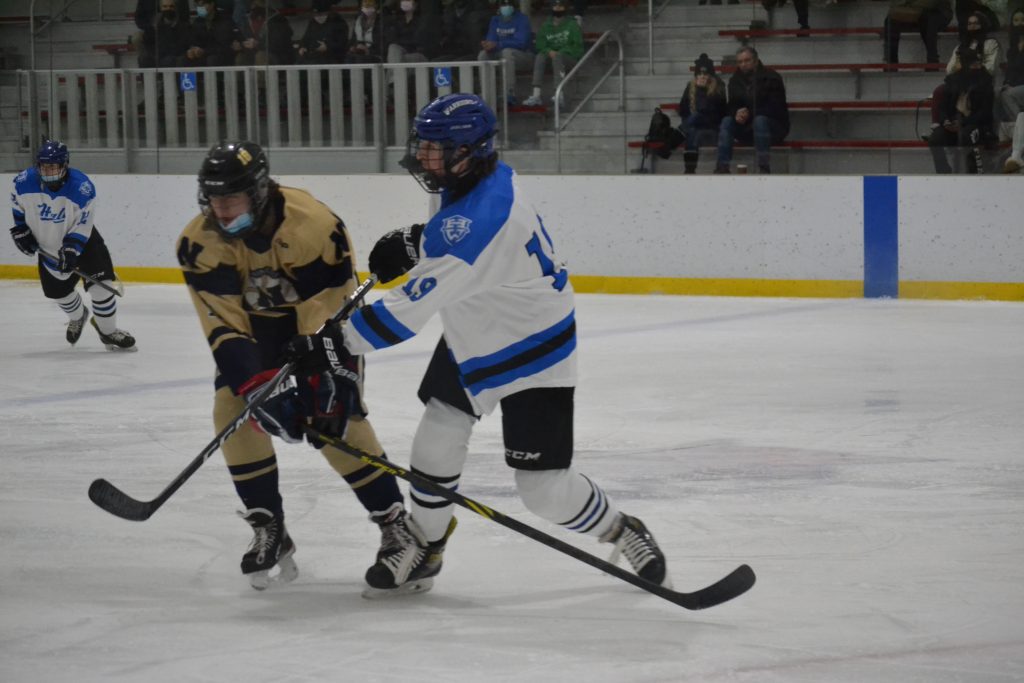 Hall would have one final chance to narrow the gap when they had a two-man advantage for 39 seconds and the faceoff in the Newington zone. Despite controlling the draw, the Warriors would not get any serious chances on Wagner and the game belonged to the Nor’easters at the final buzzer, 4-2.

The Warriors return to action on Saturday when they host the 2-4 Enfield-East Granby-Stafford Co-op team at 1:30 p.m. at Veterans Memorial Ice Rink