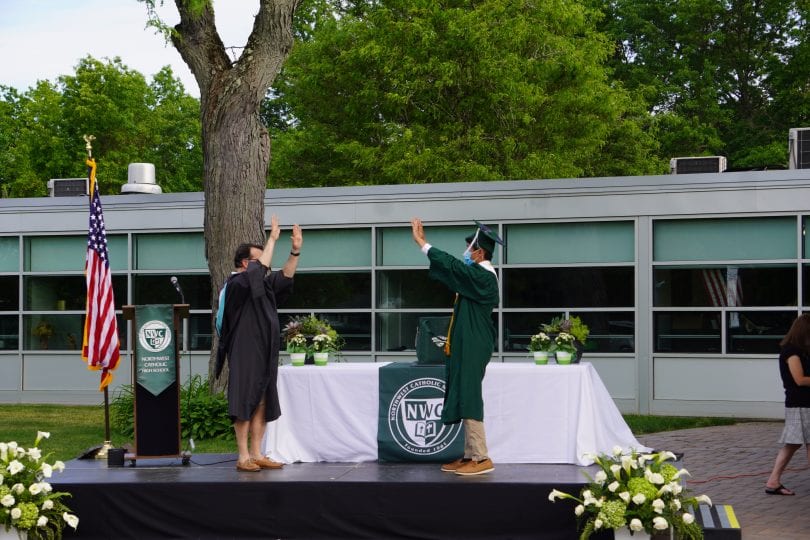 Northwest Catholic’s 56th commencement was delivered virtually, with the graduates collecting their diplomas via a drive-by graduation parade at the West Hartford campus. 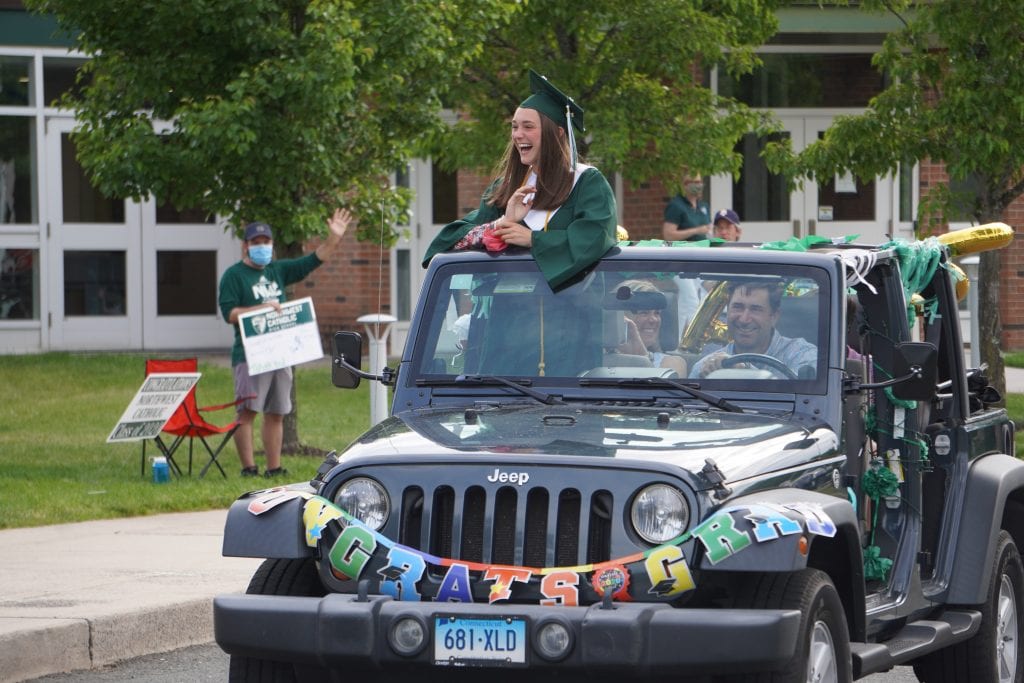 While the COVID-19 crisis prevented Northwest Catholic High School from hosting the planned graduation at the iconic Cathedral of St. Joseph, the school did an admirable job of celebrating its graduates via a virtual commencement ceremony.

Graduation was split into three separate parts, each conducted on a different day. A virtual baccalaureate mass was held on June 2, followed by commencement exercises on June 3 and a graduation car parade on June 4.

Benjamin S. Lee, student council president at Northwest, began the school’s virtual commencement with an opening prayer, in which he thanked god for the “opportunity to learn and grow at Northwest Catholic High School.” In addition, he thanked his classmates, teachers, and loved ones for their unwavering support.

In his opening statement, the school’s president, Christian Cashman, elaborated on the growth he felt the class of 2020 had made during their four years at Northwest.

“The 133 members of the NWC class of 2020 have been educated according to our NWC mission: mind, body, spirit, and imagination. We could not be more proud of you as a class, both as unique individuals and as the class of 2020.

“We are incredibly proud of you for may be your most singular and great good work. I speak of course about your extraordinary spirit of unity during these last two months of your senior year … with courage, with faith, with trust, with hope, you have led us,” said Cashman, speaking on the coronavirus crisis.

“It is so clear … that the class of 2020 is a most amazing example of those who have learned the Northwest Catholic way,” Cashman added.

Most Reverend Juan M. Bettencourt, Auxiliary Bishop of Hartford, followed Cashman’s remarks with a brief prayer. He then gave way to Katherine Rose Dudley, the class of 2020’s salutatorian.

Dudley admitted that it felt hard to celebrate, and noted “this was not the good-bye to high school we wanted,” especially given that there was no normal graduation, prom, spring dance, or even spring sports.

Despite those cancellations, Dudley urged the class of 2020 “not to postpone joy,” citing a saying from Lori Masterston.

“All of our events can be cancelled, postponed, or even virtual, but we can’t postpone the joy of our high school career … we cannot dwell on what we should have had, but we must focus on what we did have, and be joyful.”

After Dudley spoke, the graduates were presented by President Cashman. Each student had their yearbook picture displayed as well as all honors announced. Then, each graduate had a virtual “turning of the tassels,” signalling their new status as high school graduates.

Following the presentation, Gabriel M. Landy, class valedictorian, had the chance to speak.

But, Landy added, “nothing, not even a global pandemic can ever or will ever take away the work we’ve put in to to get here or, most importantly, the bonds and relationships we have formed.”

Landy went on to touch on the importance of those relationships to himself and to the community, and asserted that we “are nothing without them.”

“We may be physically separated at the moment, but I assure you, we still have each other,” he added, alluding to the tight relationships the class of 2020 shared.

Landy concluded with a heartfelt and powerful message.

After Landy spoke, Most Reverend Leonard P. Blair, the Archbishop of Hartford, delivered some concluding words to the class of 2020, offering advice about graduating in the midst of the COVID-19 crisis.

He began by citing an latin saying, which translated to “it is through what is difficult and bitter that we reach the stars.”

Blair noted nearly everything worth accomplishing in life calls for a type of discipline, and that employing that discipline is what helps us grow as people.

“Suffering leaves its scars … but these scars are badges of honor, of adversity and evil that has been overcome.”

The COVID-19 pandemic will certainly leave its fair share of scars, but Blair urged the Class of 2020 to keep their eyes on the stars, and to attempt to overcome the difficulties brought upon by the epidemic to better themselves and their world.

To complete the presentation of the graduates, the class of 2020 were able to collect their diplomas and take pictures with family at a drive-by graduation car parade held on June 4, the day after the commencement ceremony.

Almost every student attended, many in cars adorned with balloons and other festive green and white decorations. Each graduate collected their diploma, took a picture with president Cashman, and then received a gift bag courtesy of the school. There was also a designated area for families to take pictures with the graduates.

The graduation parade was designed to adhere to social distancing restrictions, and each family was able to remain six feet from one another even while taking pictures.

Northwest’s graduation certainly didn’t play out as anyone would have imagined several months ago, but the virtual commencement and graduation parade made for about as authentic a graduation experience as one could wish for in such a challenging time. 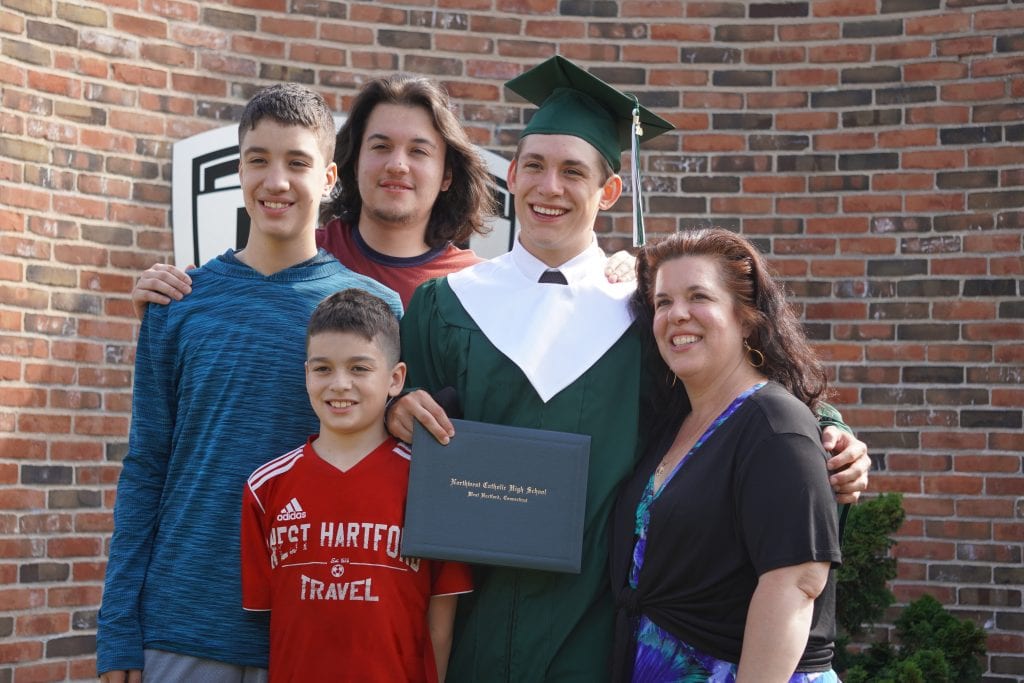 Lorenzo Garcia pictured with his mother, Deborah Mongillo-Garcia, a 1990 graduate of NWC, brother Marcos, a 2018 graduate, and younger brothers after receiving his diploma at Northwest Catholic. June 4, 2020. Courtesy Photo 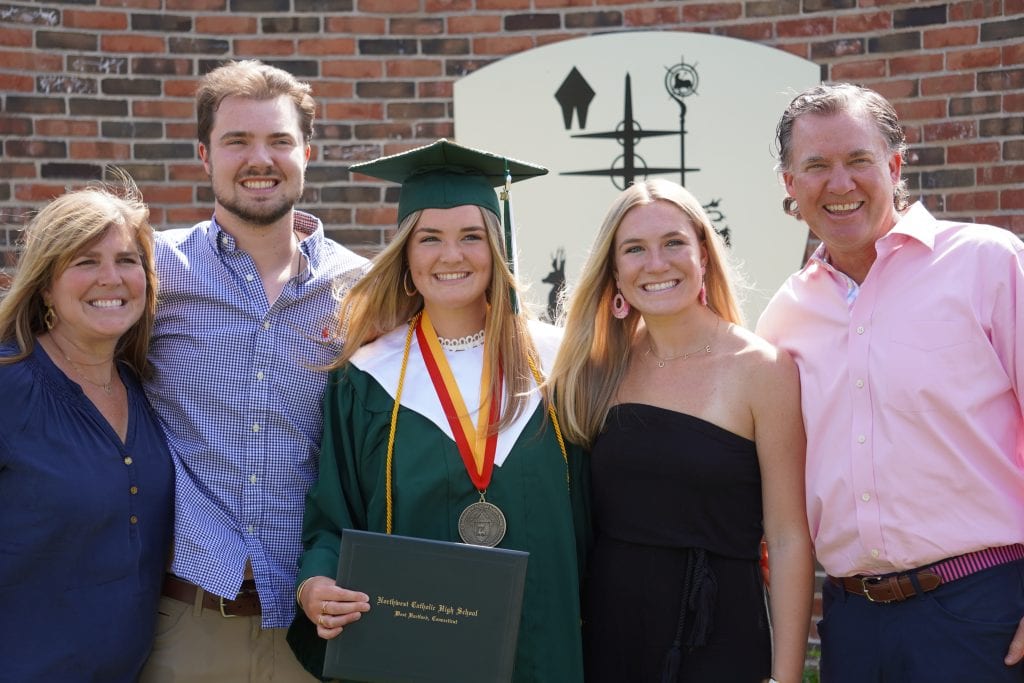 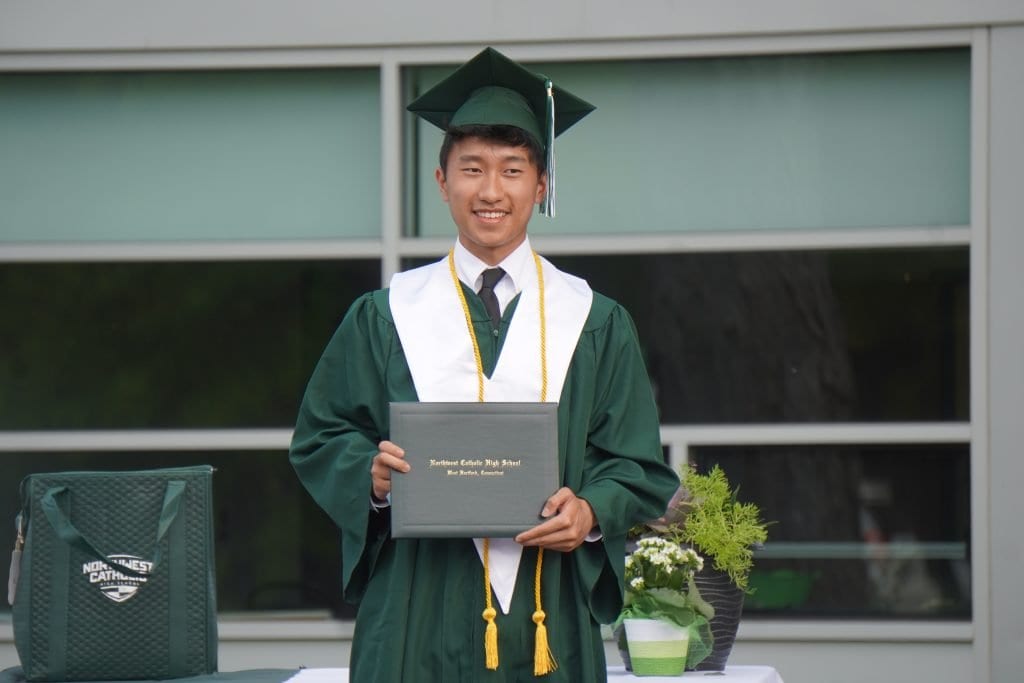 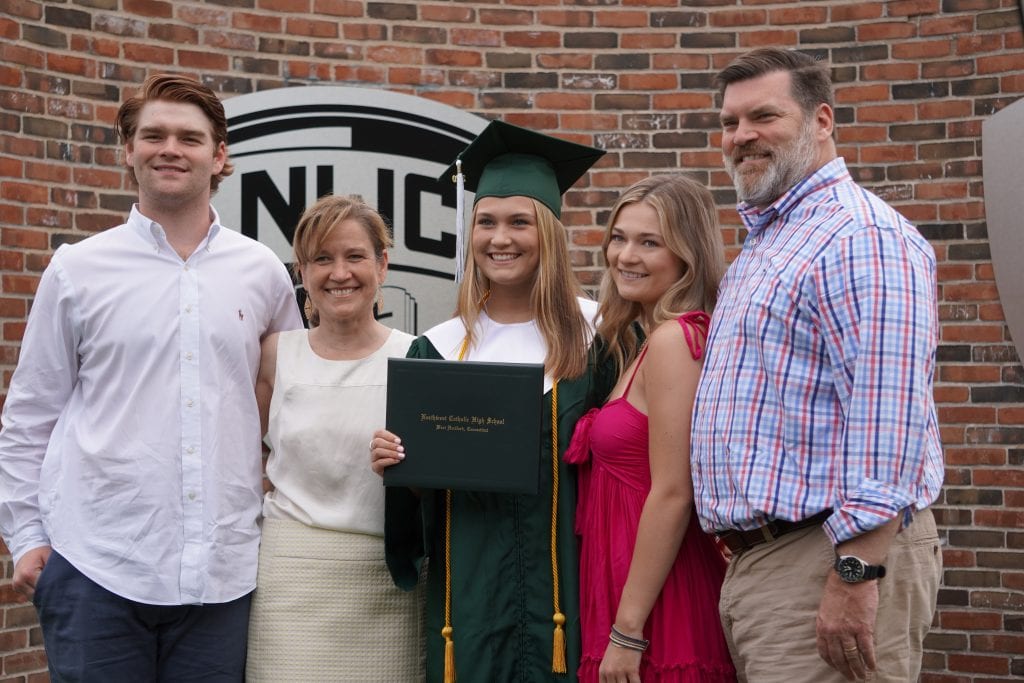 Caroline Sisk of Simsbury received her diploma from Northwest Catholic High School on June 4, 2020 during their graduation car parade. Pictured her with her family. Caroline is pictured with her siblings, also graduates of NWC, Tyler ’16 and Meghan ’19, and her parents, Michael, a 1985 graduate of the school, and Patricia. June 4, 2020. Courtesy Photo. 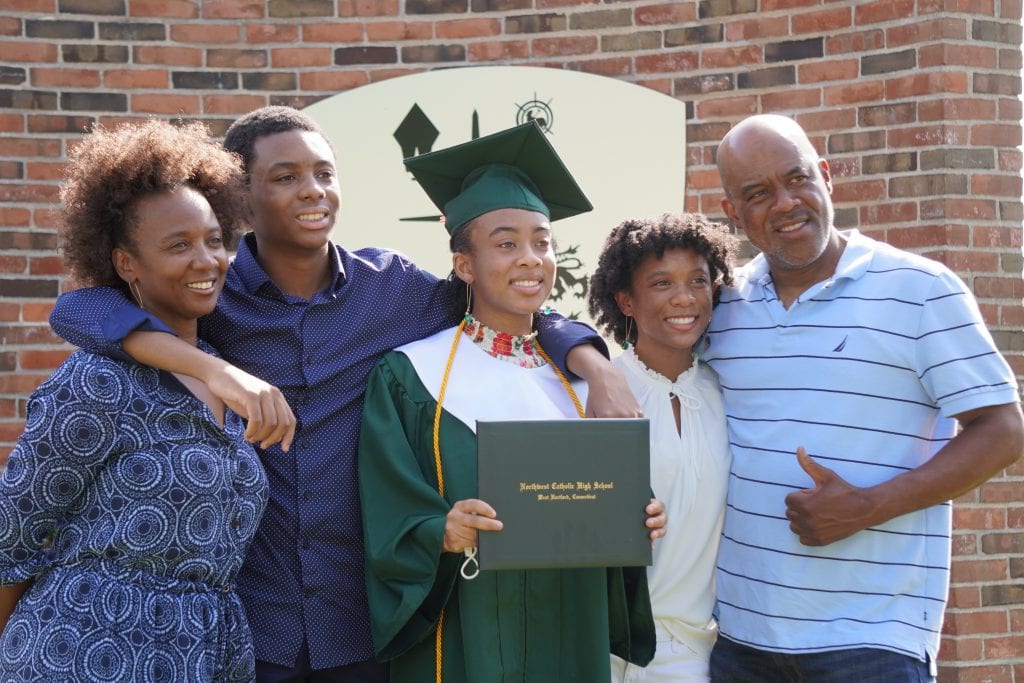 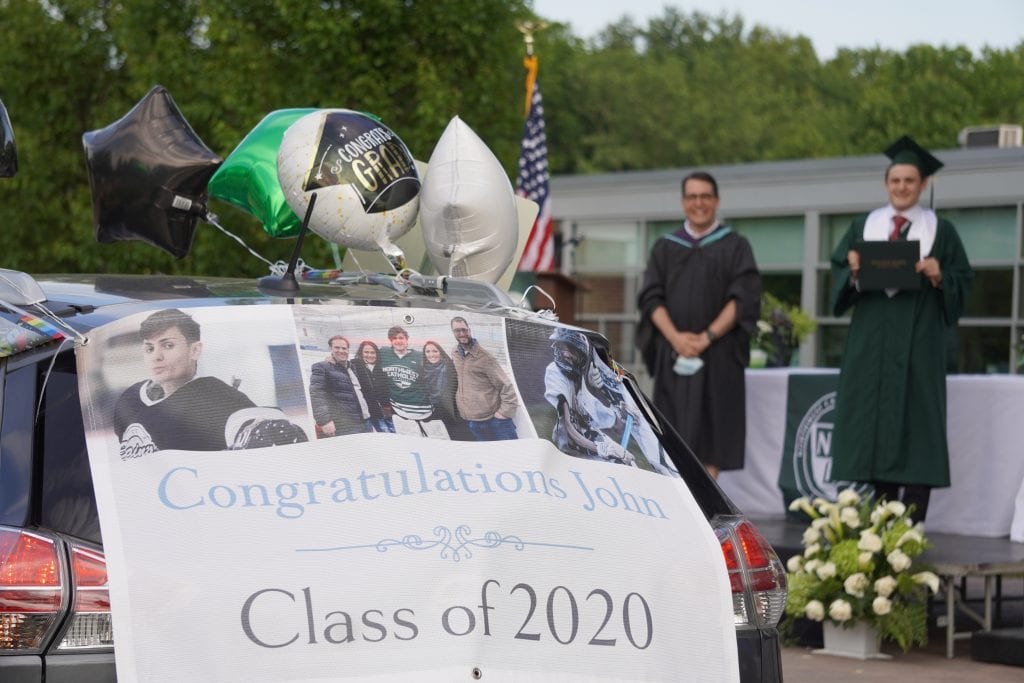 John Lewis IV of Farmington pictured on the stage with President Christian J. Cashman while his family cheers him on from the car. June 4, 2020. Courtesy Photo. 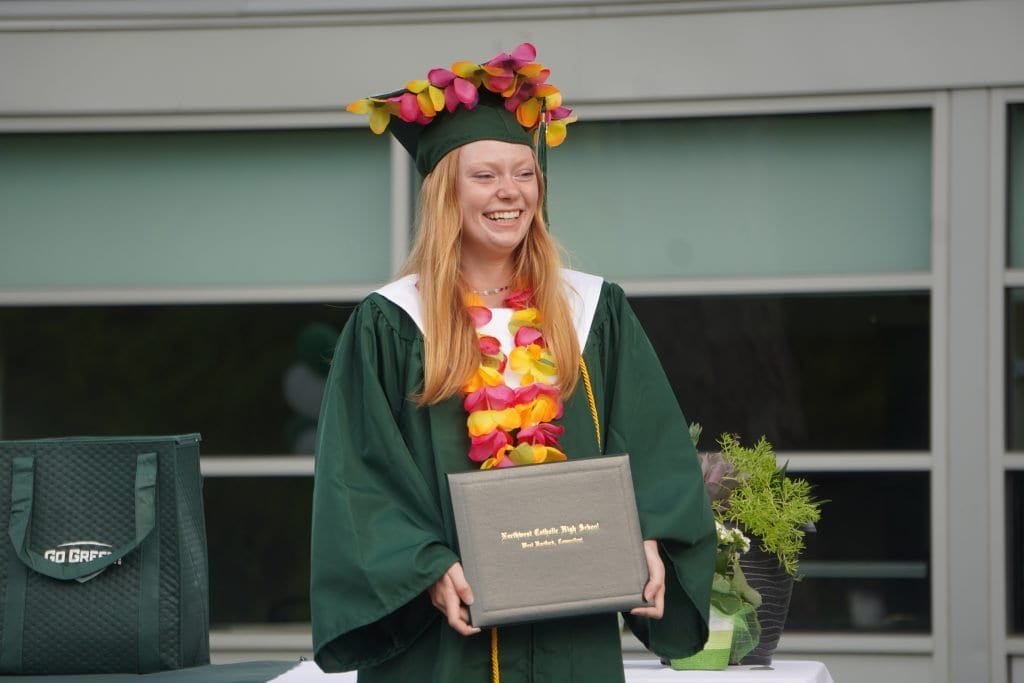 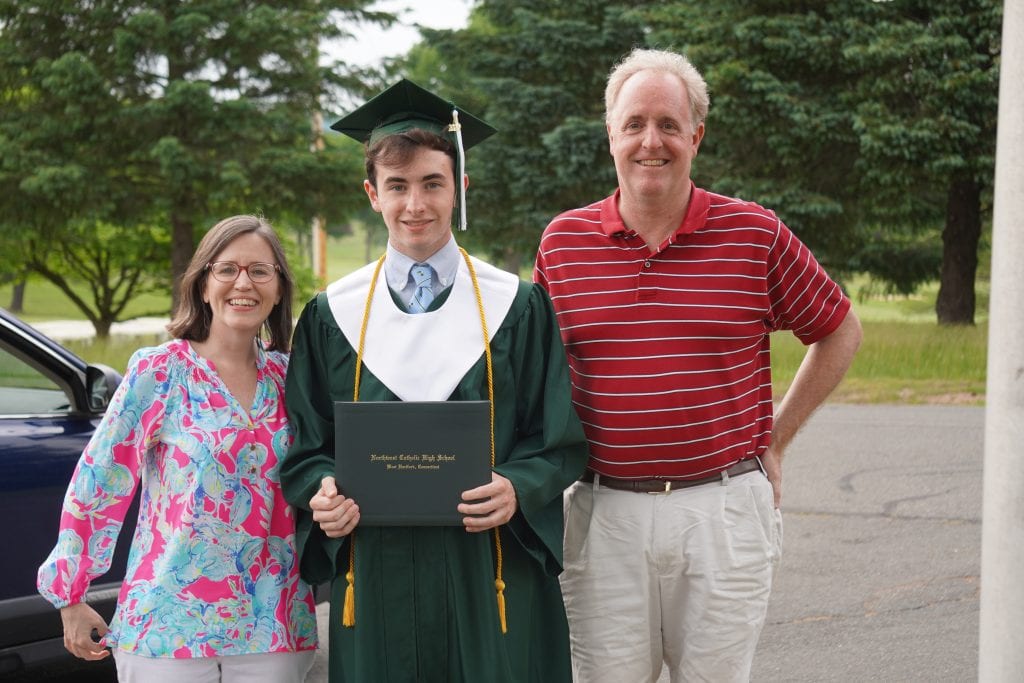 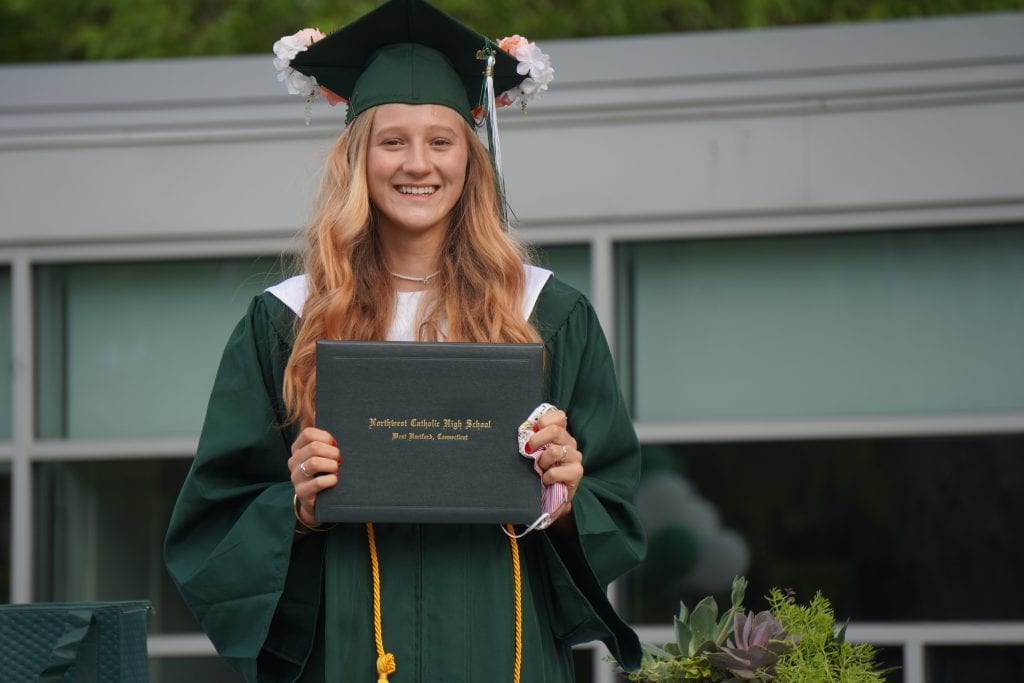 Hayden Neubert of West Hartford, also a legacy (Her mother Eileen graduated in 1985), shows off her diploma. June 4, 2020. Courtesy Photo. 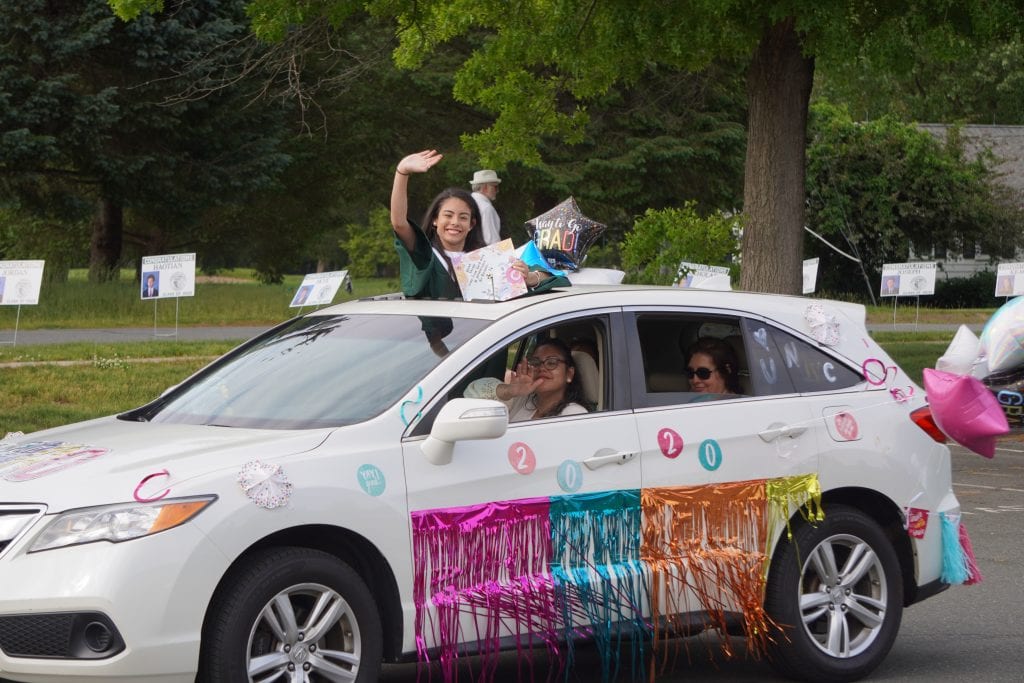 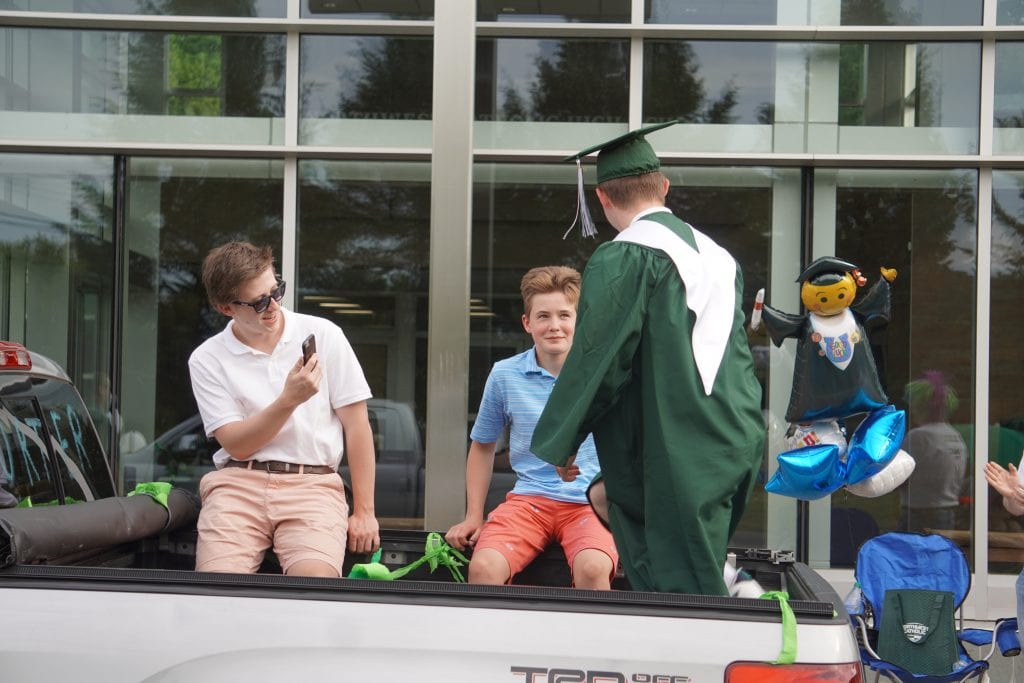 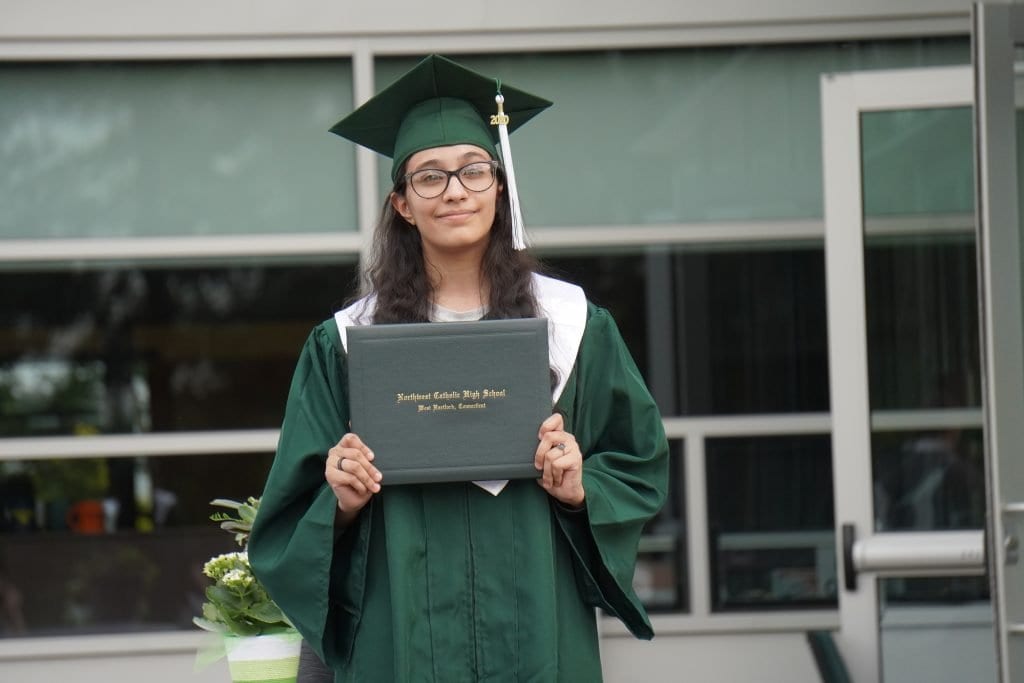 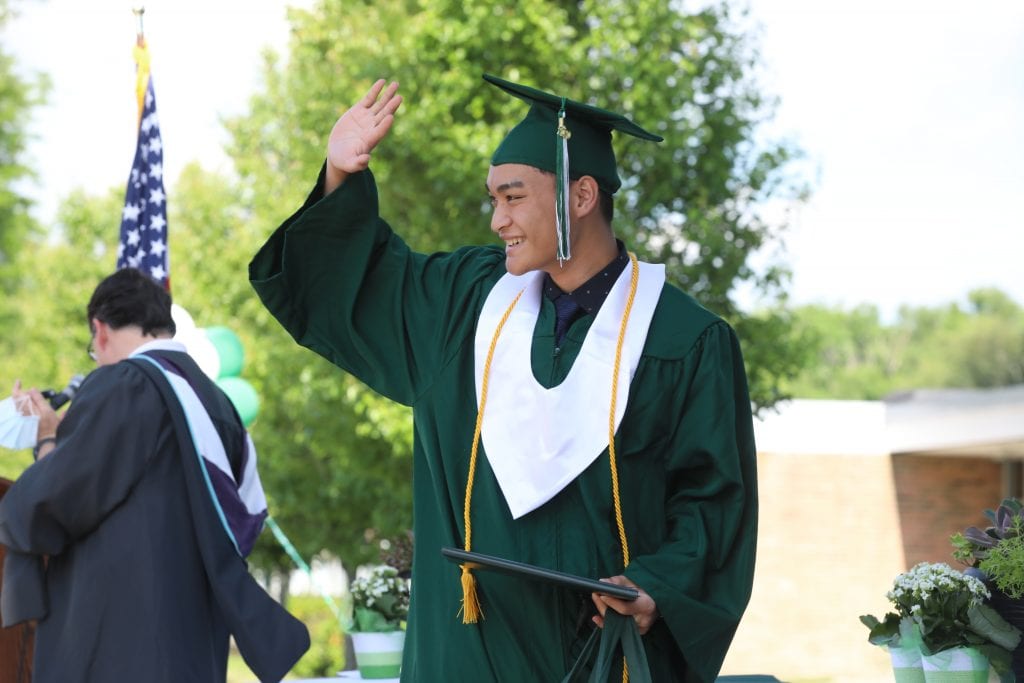