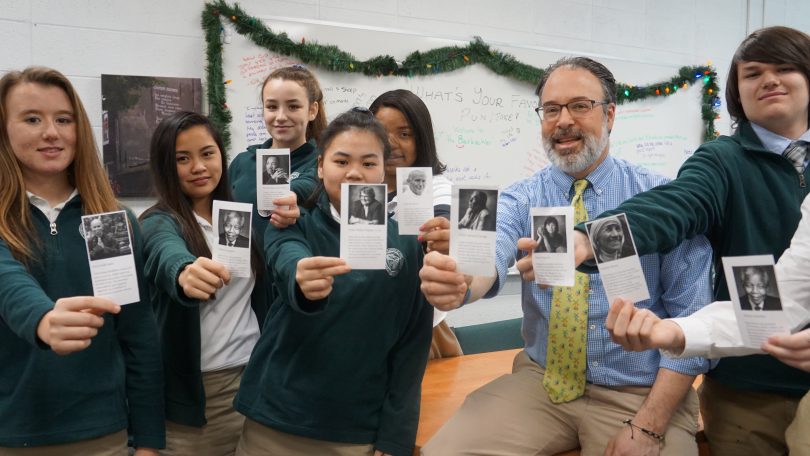 Religion teacher Chris Haddad of West Hartford and students in the Campus Ministry Office hold up their peacemakers. Every student and staff member was given a peacemaker to be held in their pockets during the school’s “Peacemaker in Your Pocket Day.” Submitted photo

In advance of Martin Luther King Day, Northwest Catholic High School held an assembly and unveiled a powerful canvas of King’s ‘I Have a Dream’ speech at the West Hartford school.

A powerful canvas created by Northwest Catholic Art III students celebrating Dr. King’s “I Have a Dream Speech” is on display before it finds its permanent place in the Breen Center of the Arts. Submitted photo 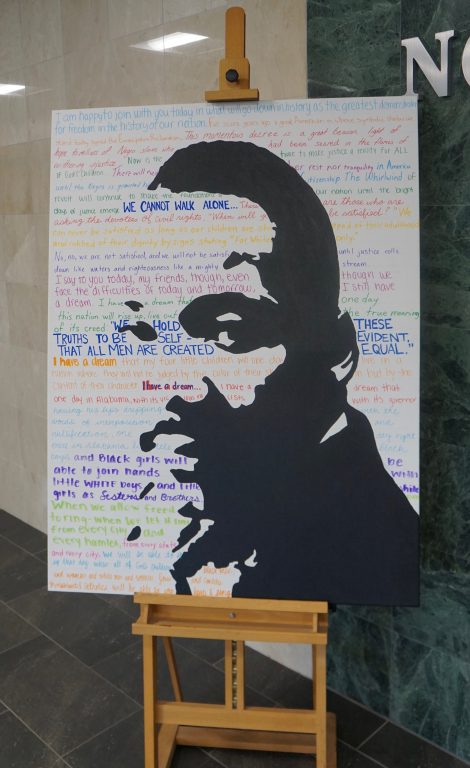 They’ve also reached beyond honoring the great Rev. Dr. King to remembering peacemakers throughout history and from all over the world. King’s message of peace, justice, faith, and love is the perfect fit for this West Hartford high school that holds these tenets close to its heart, and the school’s diverse community committed to justice make the study of peacemakers a no-brainer.

NWC came together Monday morning to pay tribute to Dr. King. To start, President Christian Cashman spoke of King’s commitment to the “beloved community,” urging the audience to help realize King’s dream by making Northwest Catholic a “beloved community” and remembering all the great leader preached. Cashman delivered his remarks amidst a backdrop of a time-lapse video capturing Ms. Marquis’s Art III students creating a powerful canvas of King’s “I Have a Dream Speech,” which will hang in the school’s atrium until Jan. 21 before finding a permanent location in the Breen Center for the Arts.

Following President Cashman’s remarks, emcees Kiana Woods of Bloomfield and Sheena Wolliston of Windsor, both seniors at the school, delivered the morning prayer, introduced a video highlighting MLK’s call to do right and his courage in the face of threats, and guided eight students on stage who shared MLK quotes.

Following the litany of famous words, keynote speaker Justin Tavares, a sophomore from New Hartford, gave a detailed history lesson of King’s work for civil rights and tied King’s message back to Northwest Catholic, explaining how this community before him represents what King dreamed of — a place where no matter your race, religion, socioeconomics, etc., you belong.

The audience then enjoyed a video  of NWC students and staff quoting Dr. King in different languages, including Haitian Creole, German, French, Chinese, Hindi, Spanish, and more. Seeing the faces and hearing the languages of fellow students and staff helped the audience to see what richness surrounds them and how King’s message extends beyond the American Civil Right Movement to peace and justice across the globe.

The final element of Northwest Catholic’s MLK program was a play on the famed “Poem in Your Pocket Day.” NWC borrowed the idea to celebrate “Peacemaker in Your Pocket Day,” where every student and staff member was given a small photo and brief biography of an important peacemaker in history. They were charged with holding their peacemaker in the their pockets to be reminded of what greatness is, and they were encouraged to share their peacemaker with their friends. Thirty-six different peacemakers, from Nelson Mandela to Malala Yousafzai to Mahatma Ghandi to Sister Helen Prejean, left the Rice Auditorium in pockets and are walking into every corner of the campus.

Martin Luther King Day will come Monday, Jan. 21, and Northwest Catholic’s students will have the national holiday off from school. They’ll be sleeping late, playing video games, watching Netflix, studying for midterms, and doing what teens do. But the Northwest Catholic community will know why they have the day off from school and knowing why this holiday is so important is enough.

NWC senior Sheena Wolliston of Windsor as one of the emcees at the school’s MLK celebration Monday morning. Submitted photo

During the school’s Martin Luther King Celebration, Justin Tavares gives a history lesson of King’s contributions to the Civil Right’s Movement and ties King’s message back to Northwest Catholic as a diverse community. Submitted photo