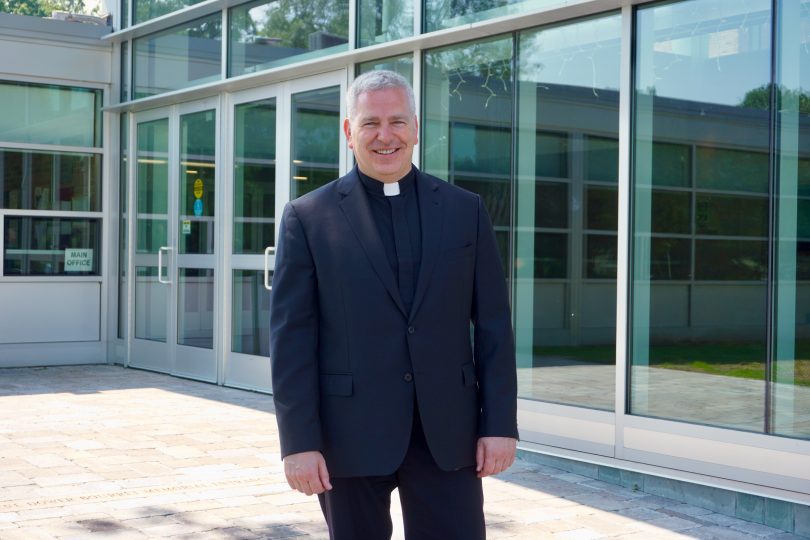 After serving in an interim role, Fr. Michael Dolan was appointed president and head of school at Northwest Catholic High School in West Hartford in January 2021.

Fr. Michael Dolan began his first full academic year as the president and head of school at Northwest Catholic, leading the school into its 60th anniversary year with hopes to strengthen the school’s identity and prepare students for a successful future while keeping them safe amid the lingering COVID-19 pandemic.

In an interview with We-Ha.com last week, Dolan spoke about his unique background, and the legacy he hopes to create for the current community as well as 8,000 alumni.

Dolan, 55, was born in Waterbury and grew up in Meriden where he graduated from Maloney High School, and went on to study foreign affairs and history at Assumption College. He worked as a lab technician before taking his first teaching job, at St. John the Evangelist in Watertown.

He entered St. John’s Seminary in Brighton, MA, in 1991, graduating in 1995 with a Master of Divinity, and since then has accumulated a wide range of diverse experience.

For 10 years he served (concurrently) as chaplain at both Trinity College and the University of Hartford, leading preparation for marriages in the chapel and gaining experience in leading interfaith dialogue.

Dolan earned his teaching certification from Central Connecticut State University, and he appreciated the requirement to study special education, and the different ways people learn.

Just last May he added to his own academic achievements, receiving a doctorate from Hartford Seminary that he began pursuing in 2016.

Prior to Dolan’s appointment, the last priest to head Northwest Catholic was Rev. Henry C. Frascadore, who was named president in 1985.

Dolan was serving as Interreligious Affairs director for the Archdiocese of Hartford when he was tapped as interim head of school for Northwest Catholic following a comprehensive, national search. He had worked with the previous school leaders, and staff at the Archdiocese liked the idea of having a priest in the role, he said. “It’s not a job, it’s a vocation.” 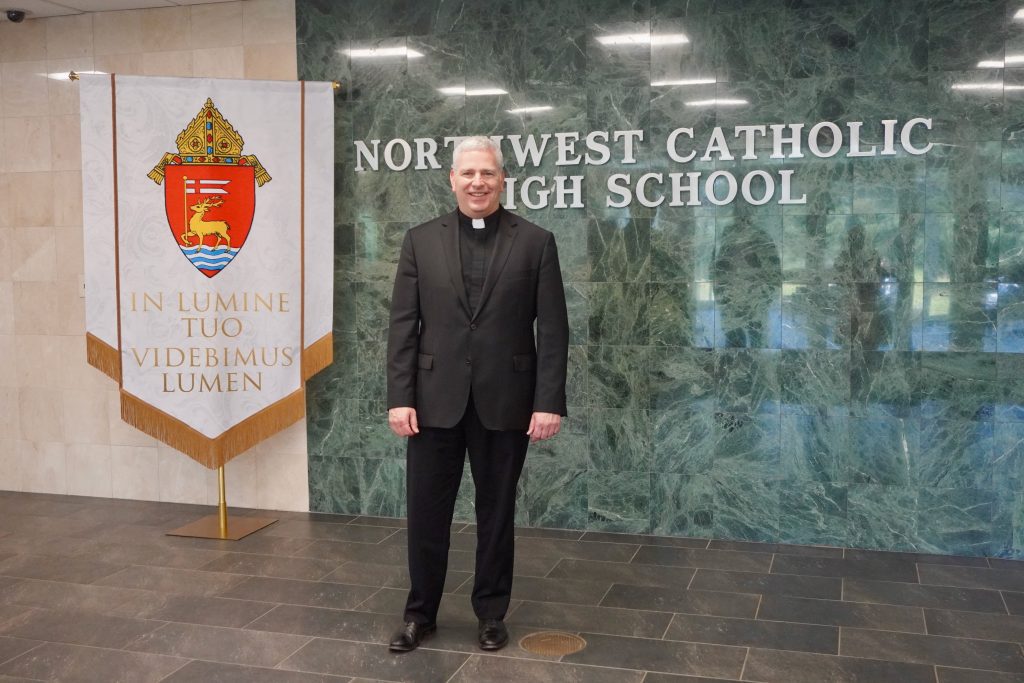 Dolan said his focus is on the Catholic mission, but his experience has also given him a deep understanding of other major faiths.

“Learning works,” Dolan said. “You expose children to great things, and then you. unpack it.”

Dolan said wants to ensure that the West Hartford campus is welcoming, even homey. “I want to hear laughter in the hallways … I want them to learn, but I don’t want it to be too rigid.”

“It’s hard to exist in the TikTok world,” he said. But from his interactions with the current students he said they are “very studious, very polite, very kind.” The students coach each other to promote a “culture of deep respect,” Dolan said.

Not surprisingly one of his biggest concerns is COVID-19, but after last year the protocols are in place. While some students were virtual throughout the 2020-2021 school year, this year all will be in person.

Test results at Northwest Catholic were above the state average even during the pandemic year, he said, but there is catching up to do. “The lack of in-person instruction affected some skills needed to advance,” he said, and a learning center has been created in the library to assist students.

There were 114 graduates in the class of 2020, and enrollment is up this year, for the second year in a row. The total number of students currently is 460, representing approximately 56 towns.

“International students are back,” Dolan said, and there are many transfer students from other schools.

An in-person meet and greet was held in someone’s backyard before the start of school, which gave Dolan a chance to get to know students and families.

Masks are required indoors, and Dolan said he purchased a big tent for this year so students will be able to get to know each other un-masked. Students are also able to remove their masks in the two courtyards and on the athletic fields.

“I want the kids to be face-to-face,” he said. “Not look at each other like bank robbers.”

A tradition he’s brought back to the school is weekly convocation. “Every Monday we highlight something,” Dolan said, which could include academic or sports achievement.

Dolan said he can’t wait to go to sporting events, and all sports will be back this fall. More than 90% of Northwest Catholic students participate in at least one of the 26 sports the school offers. He would like to add more teams, but there’s only so much gym and other space currently available. Expanding athletic facilities is a goal, he said.

He’s brought together the captains of all the teams, and is encouraging them – as well as all students – to really get to know each other, to share their stories, to teach each other by talking about their unique backgrounds and heritages.

Northwest Catholic prides itself on having small classes, with the largest having just over 20 students. Students are able to take online courses if they are interested in a topic that is not offered, and those classes are then accommodated through supervised study hall.

The school is currently adding inscribed pavers – which can be purchased by students, alumni, family, and friends with a personalized, commemorative message – as work continues to repair the entrance to the Irene Dower Bourret Memorial Entrance. Information about purchasing a brick can be found here.

As Northwest Catholic prepares to celebrate its 60th anniversary, Dolan is also looking to further engage the school’s roughly 8,000 alumni and build on the school’s endowment.