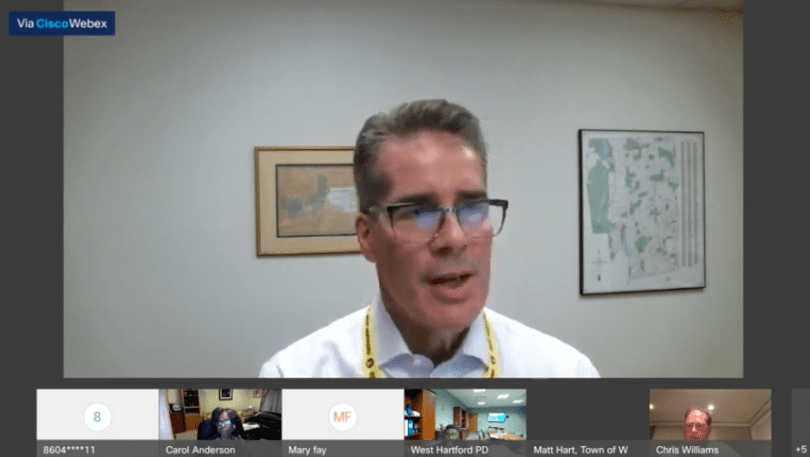 Crimes committed by juveniles in West Hartford, and throughout Connecticut, often make headlines not just because of the nature of the acts, but also because the perpetrators are often released to a parent or guardian within hours, and rarely face consequences of significant magnitude.

The meeting focused on juvenile crime, as well as recidivism – and offered suggestions that Hart, Cantor, and Riddick urged the legislators to support in order to address the systemic causes of certain activities as well as empower the justice system to more effectively identify and deal with the actions of repeat offenders.

One of the suggestions – that information about juvenile arrest records be able to be shared among law enforcement agencies – was announced this week as a policy change by the judicial branch.

Other suggestions include use of tracking devices for repeat offenders, which will in turn require resources to monitor the tracking.

Increasing the time a juvenile can be held by police from the current six hours to 24 hours without a detention order would allow more time for actually connecting with a parent or guardian rather than just releasing the juvenile into their custody. The ability to detain juveniles involved in serious offenses without an order is also being requested, along with the reopening of the juvenile detention center in New Haven.

There should also be an emphasis on providing counseling, as well as other services, to the parents or guardians of juvenile offenders, the letter states.

Cantor said Wednesday that the “delegation is very interested in helping and listening,” and supportive of measures to help curb crime and increase safety in West Hartford and across the state.

Riddick said he appreciated having the audience with the legislators.

Hart said the legislators indicated they hope to act on the recommendations outlined in the letter either during a special session or in the next session. “They understand the sense of urgency,” he said.

The text of the letter has been provided below.

Mayor Cantor, Chief Riddick, and I would like to thank you for the recent opportunity to meet with you to discuss various means to reduce the incidence of crime and quality of life issues. In particular, we focused much of our conversation on juvenile crime and recidivism. I believe that we all agreed that many of the systemic causes leading to crimes committed by juveniles are beyond the scope of law enforcement, and that the state needs to invest more resources in youth and families as a preventative measure.

As we agreed at the end of our meeting, we wanted to provide you with a recap of the key suggestions that we offered for your consideration:

We greatly appreciate your consideration of these proposals and are available to discuss them further at any point. We hope that the General Assembly has a productive conversation regarding these important topics and takes constructive action to mitigate juvenile and other crime, and to reduce recidivism among our youth population.