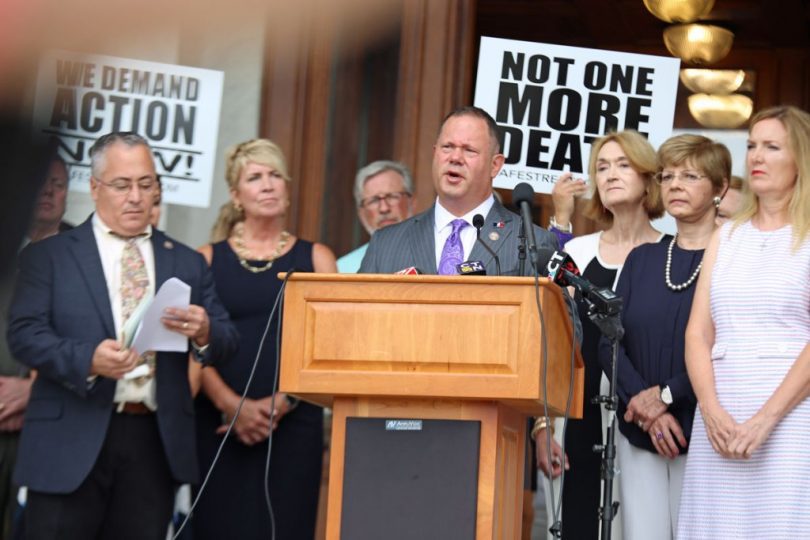 A new policy has been put into place that will allow police access to the prior criminal history of a teen.

Republican state legislators were still calling Wednesday for a special session to address problems with the juvenile justice system even after the judicial branch announced that police will have better access to the prior arrest records of teens.

The policy change allows police to request the prior criminal history of a teen as part of the process to have the juvenile detained until a court appearance. Previously police only had access to their own arrest records until the juvenile appeared before a judge, judicial branch officials said.

“This is an opportunity for police to get the information to add to the order to detain,” said Gary Roberge, executive director of the judicial branch’s Court Support Services Division which oversees the state’s juvenile detention centers.

New Britain Police Chief Christopher Chute was among those publically calling for the change in July after a jogger had been struck and killed by a 17-year-old in a stolen car the month before. “He had been arrested in New Britain 13 times before,” Chute said of the teen driver. “There is no system to check if he’s been arrested by other departments.”

But Candelora, Fishbein and Rep. Rosa Rebimbas, R-Naugatuck, said they still wanted a special session to deal with other Republican juvenile proposals including instituting mandatory electronic monitoring for juveniles arrested on a new offense while already awaiting adjudication on prior charges.

Republicans also want any judge who denies a juvenile detention order to explain in writing the reasons for the denial within 24 hours and they want the courts to require the Department of Children and Families to investigate juveniles charged with a felony, a Class A misdemeanor, and several other serious charges including sexual assault or an offense committed with a firearm.

The juvenile criminal history policy change “was a direct result of the outcry and advocacy from scores of Connecticut residents who are fed up with our state’s broken juvenile justice system,” Fishbein and Candelora said in a joint statement issued Wednesday morning calling the policy a “starting point toward implementing substantial changes to a system that lets teens get arrested over and over again with little or no consequence.”

Connecticut, like much of the nation, has seen an uptick in stolen cars, car break-ins and other crimes as the coronavirus pandemic impacted the state.

Sen. Gary Winfield, a New Haven Democrat who is co-chair of the Judiciary Committee, said that while talks for a special session to address the juvenile justice system are still underway, he thought that legislators needed to give the new policy time to see how it works.

“We have been all over the map with this,” Winfield said. “The reality is we need time to see what the impact of this new policy will be.”

Winfield said it is unclear at the moment if a special session will be held. The legislature also recently approved a law change that requires the judicial branch to track information on juvenile detention requests made by police departments to determine how many had been approved by judges, Winfield said.

“The argument was that police aren’t seeking detention orders and if they are, judges aren’t signing them,” he said. “What we really want to know is what is actually happening.”

Under the new policy, police will be able to fill out a form requesting the criminal history of a juvenile as part of the process to seek a detention order and email it to the juvenile probation supervisor at their court of jurisdiction during business hours.

On weekends, holidays or after hours, the police would email a juvenile detention center to get the information. The judicial branch is hoping to have the criminal histories back to the police within an hour, Roberge said.

There is no prohibition on police seeking the information without also following through with seeking a detention order. Police can only hold a juvenile for six hours without a detention order, according to state law. The order allows the teen to be held until the next business day when court is in session.

It’s up to the judge to determine whether the juvenile would continue to be held after a court hearing. Roberge did not anticipate that the policy would translate into more juveniles being held at the state’s detention centers in Bridgeport and Hartford for long periods of time.