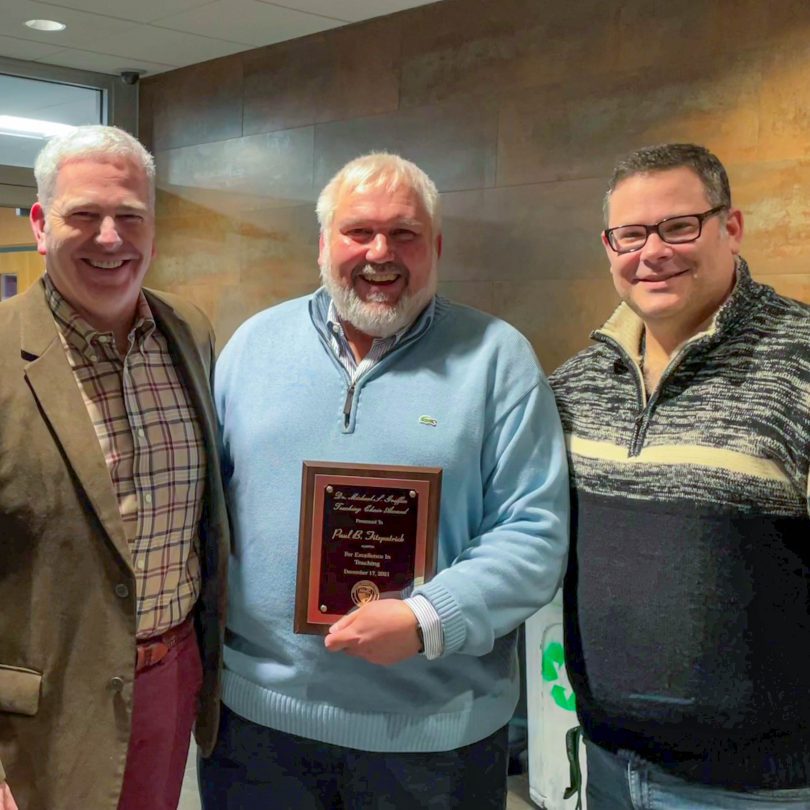 The award for excellence in teaching is given annually to a teacher at the West Hartford school.

Fitzpatrick has been teaching history at Northwest Catholic (NWC) for over 25 years and expressed how honored he was to receive the award. Dr. Michael S. Griffin was at NWC from 1996-2005 where he served as first a religion teacher, then chair of the department, as vice principal for academics and then as president. Griffin also served as the Superintendent of Schools for the Archdiocese of Hartford from 2016-18.

“Over 25 years ago, Michael Griffin took a chance on a relatively young guy from the Boston area who was looking to transition from a career in politics to one in education and that decision changed my life,” Fitzpatrick said. “As everyone knows, I am a diehard Red Sox fan but the words of one of the greatest Yankees, Lou Gehrig, come to mind as I reflect on this honor: ‘Today I consider myself the luckiest man on the face of the earth.’ I am so because I wake up every morning and go to a job that I love at a wonderful place. Since being hired by Michael, I really feel as though I haven’t ‘worked’ a day in my life, as this is more of a passion than a job. I am also eternally grateful to the wonderful veteran teachers who took me under their wing when I first arrived at Northwest Catholic and showed me how to be a good teacher.”

NWC presents the Dr. Griffin Teaching Chair Award every other year to a member of their faculty. Faculty members may nominate one candidate for the award and list the reasons for their nominations. The administration reviews the nominations and determines the final selection.

NWC Principal Chris Stuck said, “Paul Fitzpatrick is a master teacher in our Department of Social Studies, who is a favorite of his colleagues, students, and parents. His enthusiasm for teaching is contagious and his enthusiasm for working with students is obvious. His voice echoes up and down our halls when he lectures in his government classes! Paul is a fierce advocate for our teachers in his role as president of the Greater Hartford Catholic Educators Association. I have always respected Paul for the work he does even when we are on opposite sides of an issue. Above all else, Paul is a professional educator who is highly deserving of our Excellence in Teaching Award. ”