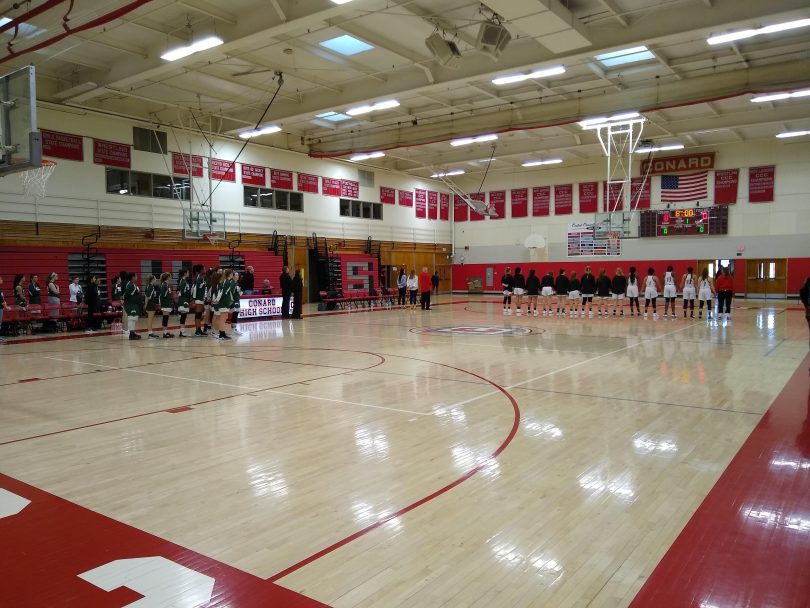 Northwest Catholic overcomes a double-digit deficit against West Hartford rival Conard to improve to 4-0 on the season.

Lebrun did most of her damage in the paint, using her size as an advantage over the smaller Conard defenders to collect rebounds and help spur the comeback.

“They didn’t have anything to match her, and we took advantage of that,” Northwest Catholic assistant coach Jenniqua Bailey said of Lebrun. “She’s gotten better from last year, and as the season progressed, she’s gotten stronger. We just want to keep elevating her game to the next level, but she’s been amazing.”

Northwest Catholic took the lead heading into the fourth quarter, as Nora Staunton made a basket to put the Lions up 46-45 with 1:07 left in the third.

The Lions came up empty on two consecutive trips to the free throw line, but Erin Carucci (12 points) sunk the second of her two foul shots to put Northwest Catholic ahead 60-59 with 1:43 left.

Northwest Catholic forced a tough shot for Conard and took possession with 11 seconds left before nearly running out the clock. Morgan Murphy (13 points) made one of her two free throws to put the Lions ahead by two with 1.3 seconds remaining.

Felder’s desperation heave from beyond half-court hit the rim but bounced out, sealing the Northwest Catholic comeback.

Here's the final shot from a thriller between Northwest Catholic and Conard. #WeHa #ctgb pic.twitter.com/d3NqFrtHPd

“Our offense, we executed so well,” said Cersosimo. “I think that Ella (DiPippo) and Azaiyah (Felder) are a really good duo together and they feed off each other, and then the rest of the team just feeds off them. We did everything right offensively.

“I think, defensively, it’s hard. Northwest (Catholic) is a really good team. They’ve got a lot of good shooters, and we’ve just gotta fine-tune the defense … but overall, I’d take a game like that any day. Our kids fought hard, and they did a very good job, so not much to complain about on my end.”

Returning nearly everyone from a team that made the Class S semifinals without any seniors last year, Bailey said the Lions’ 4-0 start is the beginning of a promising season.

“Right now, we’re doing awesome. We still have a bit of work to do,” said Bailey. “I believe – I’m gonna say it strongly and confidently – that we’re championship-ready.”