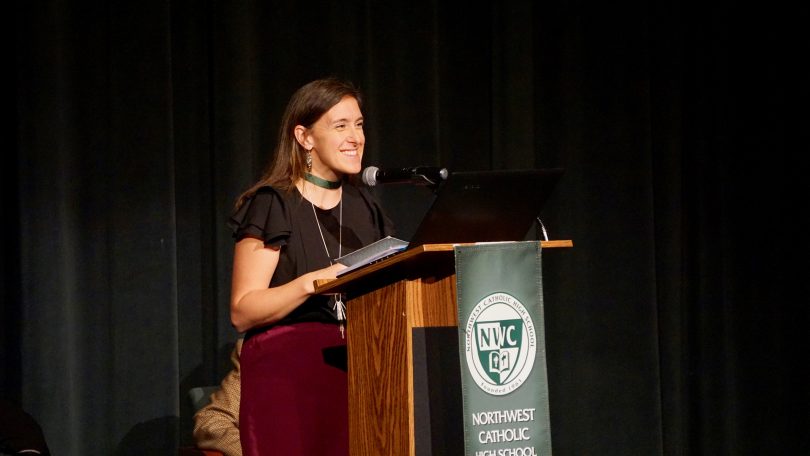 Director of Advocacy of the American Lung Association in CT Ruth Canovi gives a presentation on vaping at Northwest Catholic. Courtesy photo 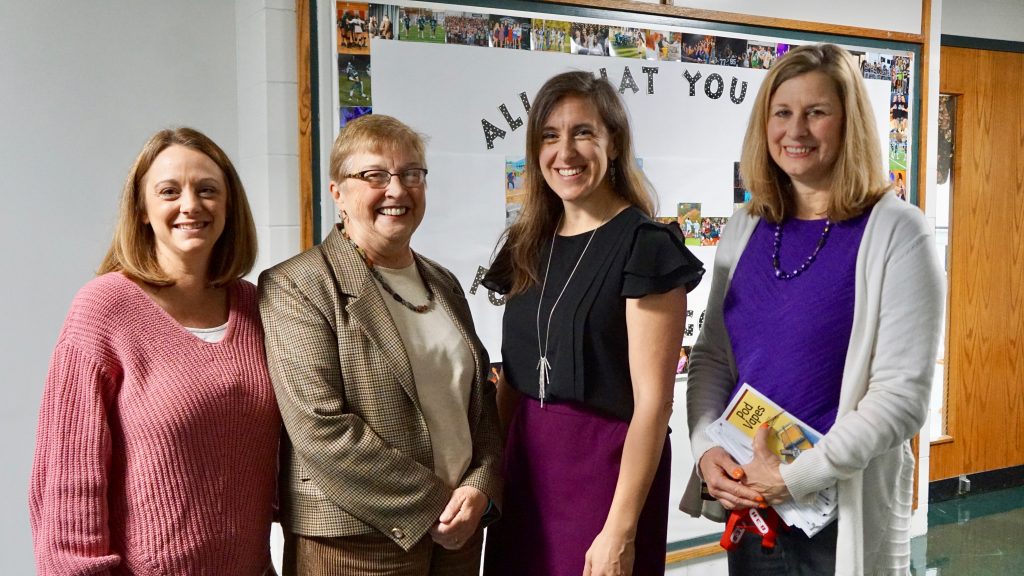 Northwest Catholic students are learning real-world skills everyday. How to think, how to work, how to lead, and how to serve are all part of their daily experience. Students at Northwest Catholic are also learning how to ask probing questions and make healthy decisions.

November’s vaping presentation by Jane Reardon, a pulmonary clinical nurse specialist, and Ruth Canovi, the director of advocacy at the American Lung Association in Connecticut, was about the dangers of vaping, and the students were listening.

Canovi’s slides helped the audience answer basic questions about e-cigarettes — what are they, why are they dangerous, and what can students do about it? She explained that e-cigarettes come in various shapes and with different names, but they’re ultimately the same and they’re always pernicious. The big takeaway? There’s no such thing as harmless vaping.

Canovi said that only a year ago most students thought vaping liquid didn’t include nicotine. Today, students are wiser. They’re aware that 99% of e-cigarettes in all their forms contain nicotine. Canovi continued to teach: “Nicotine is a colorless, liquid alkaloid that is also used as an insecticide,” and this disturbing point was not lost on the audience.

Canovi also explained that the producers of vaping tanks, mods and chemicals are manipulated to make them easier to smoke and easier to get addicted to. The diabolical element, according to Canovi, is that they target youth and they’re designed to hook their users. Canovi didn’t hold back — she said, “Phillip Morris and other tobacco manufacturers have never had the reputation of putting public health first.” There also all designing their own e-cigarettes to get their cut of the market.

What Canovi wanted the students to fully understand is that these materials are still young and still unregulated. This reality should be terrifying to users. The FDA is not yet regulating a product that is hooking users and landing people in the hospital, and even killing a few victims.

That’s when guest speaker Jane Reardon became most animated. Nurse Reardon, who is also a tobacco control specialist, shared stories of cigarette addiction, referencing one patient who had been able to quit heroin, alcohol, and marijuana but still “cried at night for a cigarette.” Reardon also spoke of the spate of “popcorn lung” patients she’s encountering at Connecticut hospitals and how terrifying these near-death experiences have been for those poisoned by vaping.

Canovi didn’t shy away from sharing gruesome photos of victims of e-cigarette battery fires, and she spoke of the skyrocketing number of visits of toddlers who’ve drank vaping fluid, mistaking it for juice. From “popcorn lung,” when an 18 year old’s lungs looked like an 80 year old COPD patient, to the crippling chain of addiction, Canovi and Reardon shared statistics and stories. After the powerful public service announcement, Northwest Catholic students were better informed. One student even raised her hand to ask the question, “What can we do?” And Ruth Canovi responded, “I’m glad you asked,” then gave sound advice about writing legislators and emailing her personally to join a task force to end vaping.