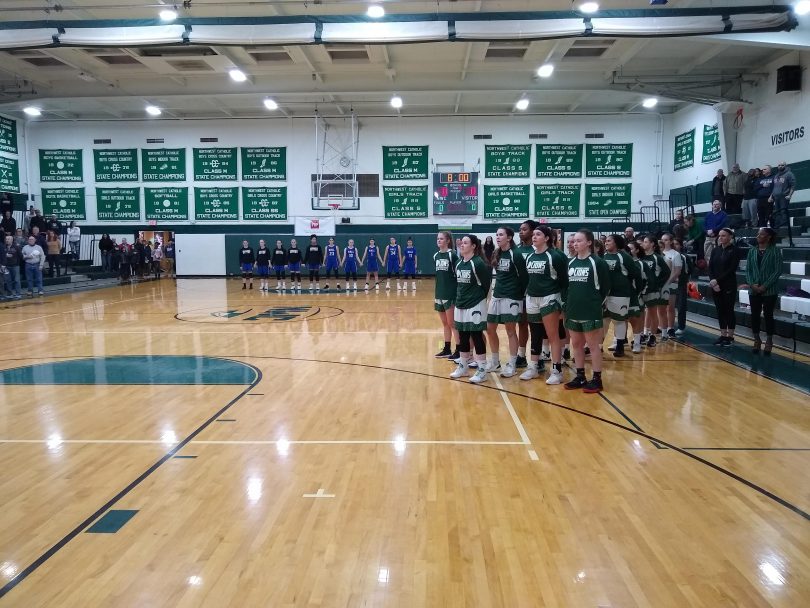 Through 24 minutes of play, it seemed whichever team had the ball last would decide the game.

Instead, the Northwest Catholic (7-1) girls basketball team pulled away from Hall (4-3) in the fourth quarter to take a 48-36 victory Monday night in West Hartford.

Northwest Catholic head coach Jenniqua Bailey credited the Lions with stepping up on both sides of the ball, outscoring Hall 15-3 in the last eight minutes.

“The biggest thing was to lock in on defense, take our time, be patient on offense, run our plays, run our sets,” said Bailey. “Towards the end, mostly I told them [to] protect the ball. Our free throws were huge at the end.”

Hall head coach Brittany Huggins said not shooting the ball well was a key factor in the loss.

“We shot 15 more shots than them, but we both made 14 field goals,” said Huggins. “We just have to make more shots. We got more looks at the basket. They shot 24 free throws to our three, so maybe we’re shooting too much and not attacking.”

Tied at 33, Carucci scored the Lions’ first four points of the fourth quarter to give Northwest Catholic a 37-33 lead. Carucci later found Nora Staunton on a fast break to give the Lions their then-largest lead of the game – 40-33 with 4:02 remaining.

In the bonus with under two minutes left, the Lions collected rebounds on the back end of consecutive trips to the free throw line to keep possession away from the Warriors.

Northwest Catholic made five of six free throw attempts in 14 seconds to go ahead 47-33 with 46 seconds left. Olivia Deslauriers made Hall’s only basket of the fourth quarter – a 3-pointer – to narrow the margin to 47-36.

The teams traded baskets in the second quarter until Bonee went on a 5-0 run of her own to give Hall a 21-18 advantage. The Lions went to halftime down 21-19 as Lebrun split pair of free throws with 1:15 left and blocked a close-range buzzer-beating shot to keep the deficit at two.

🎥: The Warriors tried to extend the lead before half, but Brianna Lebrun had other ideas. Olivia Bonee leads with a game-high 12 points for Hall, 7 in the second quarter. #WeHa #ctgb pic.twitter.com/od9mPoWiUP

Jordan Farrell made a 3-pointer to put Hall ahead 27-23 with six minutes left in the third quarter, but Northwest Catholic chipped away to tie the game heading into the fourth.

One win shy of matching their regular-season win total from last year, Carucci lauded her coach as an integral key to the Lions’ success.

“The best thing about this season so far is that we have a really special team,” said Carucci. “Coach Bailey has done a great job. She really knows how to pick us up when we’re down. … I give all the credit to Coach Bailey. We work hard for her every day, and we just want to do good for her.”

Northwest Catholic will host Glastonbury (6-1) Thursday night, while Hall will face Avon (2-3) at home. Both games are set for 6:45 p.m. 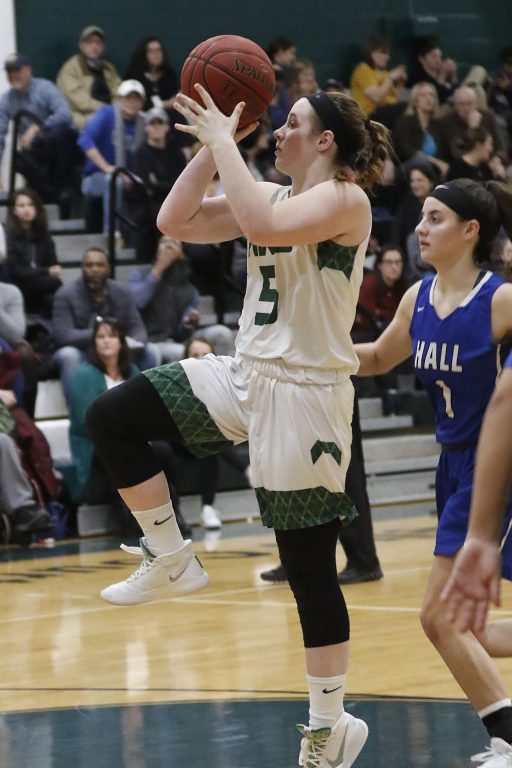