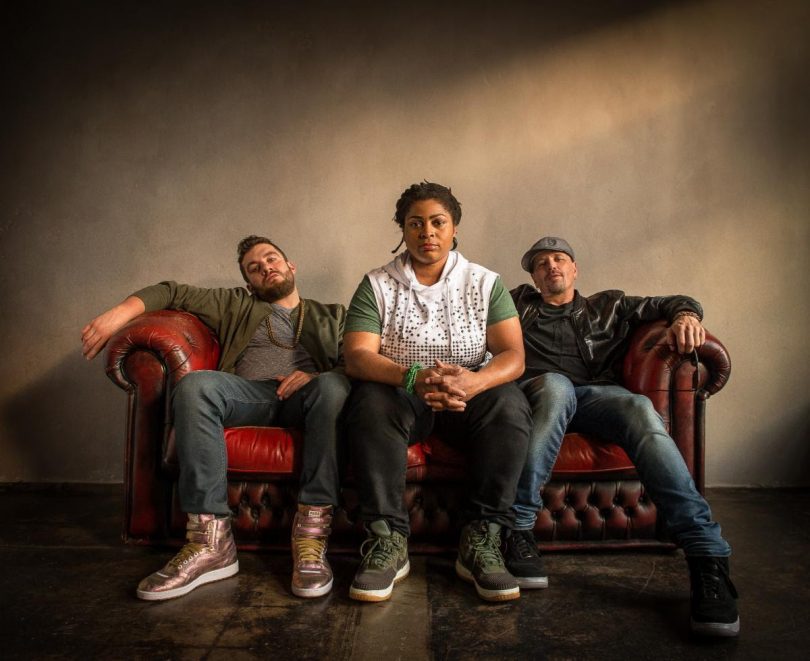 The soul trio The Nth Power will perform on Saturday, Sept. 11, 2021, at New Park Brewing in West Hartford.

Soul collective The Nth Power is set to perform at New Park Brewing in West Hartford on Sept. 11 as part of their Fall Back In Love Tour in support of a forthcoming studio album. The acclaimed trio delivers a transcendent blend of soul, funk and rock that is unique as it is infectious, and attests to the exponential power of love.

Proving that soul music can be exponentially greater than the sum of its parts, The Nth Power is on a mission to share the light.

Formed during an impromptu late-night jam during the 2012 New Orleans Jazz & Heritage Festival, the relentlessly funky and soulful band believes in music as a higher power. They tap into an energy that is simultaneously sexy and spiritual, with songs that will inspire audiences to dance, groove, make love or just stand there with goosebumps.

Hailing from diverse musical backgrounds, races and creeds, the trio brings together some of the most coveted backing musicians in the game. Renowned funk drummer and vocalist Nikki Glaspie is the heartbeat of the operation – Beyonce’s former world-touring drummer who’s worked with Maceo Parker, Chaka Kahn, Ivan Neville, Robert Randolph and is a frequent guest drummer on Late Night With Seth Meyers. She joins bassist Nate Edgar, longtime member of Billboard reggae chart-toppers, John Brown’s Body, to create the group’s intoxicating rhythm section. Guitarist and lead vocalist Nick Cassarino, who’s toured with Big Daddy Kane and collaborated with Jennifer Hartswick, completes the formula. And at the core of their original vibe is a deviously simple concept – the healing power of love.

“It’s my dream team,” said Glaspie. “Each one of us is a songwriter, so when we get together, everything becomes that much stronger. Music is what brought us together, but it’s the spiritual bond that makes us play so in touch with each other.”

The Nth Power’s 2013 independent EP, Basic Minimum Skills Test, showcases a first glimpse of the spark shared among the group, delivering gospel-style harmonies with soul, jazz, funk and world-beat riffs in nearly mathematical fashion. Two years later, the band dropped its full-length studio debut, Abundance, which was produced by industry legend Ira Schickman and garnered national acclaim from Modern Drummer, Offbeat, Curve Magazine, Relix and others. After original member Nigel Hall left his full-time duties with the group, The Nth Power went on to release two live albums, 2016’s Live To Be Free and 2018’s Rebel Music: A Tribute to the Message of Bob Marley. Now a power trio, The Nth Power continues to grow in their mission to spread love and healing across the land.<

“We’re going as far as you can go on planet Earth as musicians,” Glaspie said. “We want to change the world through music – that’s the goal.”

The music video for “Truth” can be viewed above.

The Nth Power’s 2013 EP, Basic Minimum Skills Test, quickly became a cult classic in many music circles, as did their notoriously powerful live performances. Recordings of the group’s anthem “Only Love” saw airplay on XM Radio, and the band released their full-length studio debut Abundance in 2015, garnering acclaim from Relix, Offbeat and Modern Drummer. The group went on to release two live albums: 2016’s Live To Be Free(which previews songs like “Freedom”, “Truth” and “Take My Soul” from their forthcoming sophomore LP) and 2018’s Rebel Music: A Tribute to the Music and Message of Bob Marley.

The Nth Power’s Fall Back In Love Tour marks the group’s first multi-date tour since the start of the pandemic. As such, the band asks those in attendance to do their part to keep live music as safe as possible and check with local venues to follow all admission and vaccination policies. “Our fans are like family — everyone’s health, safety and happiness is our highest priority. Please wear a mask at our shows or, even better, get tested before you walk in the door,” they said. “Regardless of how you choose to stay safe, remember that we’re all in this together.”