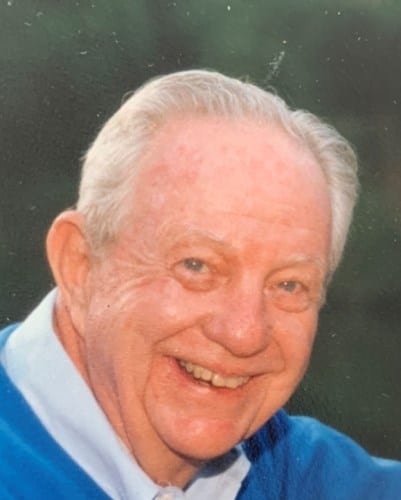 Francis Owen Eagan, 90, a longtime West Hartford resident with deep roots and an extensive family in town, died on March 2, 2021.

“Our family would like to thank the West Hartford community for all its support during this difficult time,” said Owen Eagan. “Our Dad was a strong, kind and compassionate man, a true Christian who truly cared about all those he encountered. He is an example of a life well lived. We hope to carry his example with us in our everyday lives and think one of the best ways to honor him is by being kind to one another.”

The obituary below has been submitted to We-Ha.com

Francis Owen Eagan’s greatest legacy will always be his love of family, his devotion to God and his passion for the law. He was called home by the Lord on March 2, 2021 surrounded by his family.

With a warm smile and bright blue eyes, Owen was a loving husband, father, grandfather, great-grandfather, brother, uncle, cousin, father-in-law, brother-in-law and friend. Owen was born on October 2, 1930 in Windsor, Connecticut, the son of Francis Joseph and Mazie Eagan, where he fondly remembered his years living and working with his family in the Windsor Hotel. A strong proponent of Jesuit education, he attended the Cranwell Preparatory School, Georgetown University, and the Georgetown University Law Center. His Georgetown class ring and his “Hoyas” hat were longtime fixtures of his wardrobe.

Gomp” as he was known to his grandchildren, attended all events; he could be seen clapping at dance recitals and cheering at football, hockey, lacrosse, soccer, volleyball, basketball, baseball games, tennis matches, and track meets.

A captain in the U.S. Air Force, Owen proudly served during the Korean War before attending law school. He had a true love of the law and served as a U.S. Magistrate Judge and was a quiet voice of reason for more than two decades from 1975 to 1996. Prior to serving on the federal bench, he served as a senior partner at Eagan, Jackson, O’Keefe & Murray, as an Assistant U.S. Attorney for the District of Connecticut, and as an U.S. Attorney for the District of Connecticut. He also taught trial advocacy at Western New England School of Law.

Following his retirement, Owen founded the Canterbury Resolution Center, a mediation firm and served as a judge on the Mohegan Tribe Gaming Disputes Court until the age of 85. Owen and his wife Joan were one of the founding couples of The Church of St. Timothy.

Owen was predeceased by his wife, Joan, his sister-in-law, Elizabeth Mullaney Johnson, his brother-in-law, Jack Tracey, and his nephew, Russ Jacobson. Owen’s family would like to thank Eileen Clarke, a true angel, for her care, kindness and compassion during the final years of his life. His family would also like to thank the compassionate staff at Seniors Helping Seniors, Companions for Living, Companions & Homemakers, the staff at the McAuley, and McLean Hospice care.

A Mass of Christian Burial was celebrated on Tuesday, March 9, 2021, at 10 a.m. at The Church of St. Timothy, 1116 North Main Street, West Hartford, CT 06117 with COVID-19 mask and capacity restrictions in place. Burial followed in Mt. St. Benedict Cemetery, Bloomfield. The service can be viewed at https://youtu.be/-AUcrty0nzI and below. In lieu of flowers donations may be made to the Church of St. Timothy.