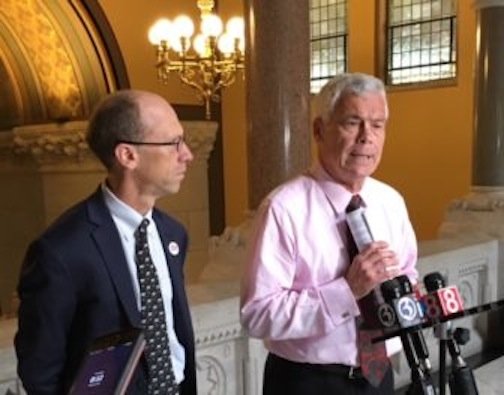 Independent gubernatorial candidate Oz Griebel, who has struggled to attract financial and political support, told reporters Thursday that he would empty the Rainy Day Fund and suspend contributions to the state’s underfunded pension system to help close a huge, post-election state budget deficit.

Shut out of Wednesday night’s debate between Democrat Ned Lamont and Republican Bob Stefanowski, Griebel tried to grab attention the following day with a proposal that echoes a darker chapter of Connecticut’s fiscal past – adding to one of the nation’s biggest unfunded pension liabilities by deferring hundreds of millions of dollars in actuarially required contributions.

Griebel, who said his goal is to provide business and estate tax relief in a way that distinguished him from Lamont and Stefanowski, acknowledged his plan could run into a tangle of legal and fiscal complications.

And while he also conceded this is similar to the approach  – taken between 1939 and 2010 – that left Connecticut with one of the nation’s largest per capita pension debts, Griebel insisted it could give the state’s sluggish economy a badly-needed chance to grow.

“If we don’t have these discussions you are guaranteed to stay on the slide,” Griebel told Capitol reporters during a late morning press conference.

The “slide” to which Griebel referred are the nonpartisan projections that state finances, unless adjusted, will run $2 billion, or 10 percent, in deficit in the first new fiscal year after the November elections. The situation worsens by 2020-21, to $2.6 billion, or 13 percent, and the potential shortfalls worsen on average by $550 million annually for two years after that.

But with Connecticut still recovering from major state tax hikes in 2015 and 2011, Griebel said he wants to avoid another increase. If possible, he added, he also would begin to phase out the business entity and estate taxes, which would provide between $200 million and $250 million in annual relief.

So how would he eliminate $4.6 billion in red ink?

The first step would be draining the $1.1 billion emergency budget reserve, commonly known as the Rainy Day Fund.

The next step centers on the fastest-growing major expense in the $19 billion General Fund – required contributions to pension funds for state employees and for municipal school teachers.

Those contributions total more than $2.6 billion in each of the next two fiscal years.

And while Griebel didn’t say how much he would seek to strip from them, he acknowledged he would need a significant amount to put his tax relief plan into play.

But the plan itself raises a host of legal and fiscal complications.

The state bargains not only pension benefits with its employees, but also how it saves for those benefits. And Griebel conceded his administration could not alter contributions to this pension without negotiating a deal with labor unions.

While specific payments into the teachers’ pension aren’t mandated by labor contracts, they are required through another binding agreement. When Connecticut issued bonds and borrowed $2 billion in 2008 to shore up this fund, it pledged in the bond covenant – the contract between the state and investors – not to short-change pension contributions until the bonds are paid off. This isn’t scheduled to happen until 2032.

The state’s pension funds also are cash poor, and withholding contributions could place a strain on the state’s ability to pay benefits.

Griebel said he’s confident the fund could survive for two years without full contributions. He added he would try to mitigate these raids by transferring other state assets, such as the Connecticut Lottery Corporations’ $300 million-per-year revenue stream, as well as underutilized state land and buildings, into the pension funds.

Connecticut’s pension debt per capita is significantly higher than that of many other states.

States’ pension costs have nearly doubled – when analyzed as a percentage of their revenue – since 2000, as Connecticut tries to make up for its past fiscal sins.

Griebel’s campaign for governor has struggled to gain traction. A Quinnipiac University poll issued earlier this month showed him supported by just 4 percent of voters and badly trailing Lamont and  Stefanowski.

Griebel, the former leader of the MetroHartford Alliance, has also struggled to raise money. His last campaign finance filing showed that as of June 30 he had $12,624 in available cash after raising $138,958 from others and contributing $81,700 of his own funds.

Griebel charged that both major party nominees were sorely lacking in details  when asked during Wednesday’s debate in New London how they would solve state government’s fiscal woes.

“We want to set a contrast to what you heard last night,” said Griebel, who was not invited to participate in the debate.