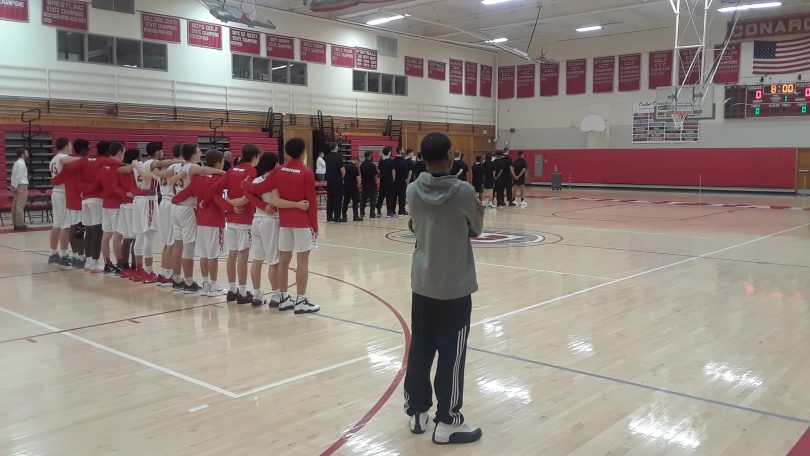 The Conard boys basketball team couldn’t keep up with the fast-paced Eagles, falling 77-69 to Enfield (7-5) on Friday night in West Hartford.

Arsen Shtefan led the Chieftains with a game-high 29 points, including 18 from beyond the arc, while Connor Olechna and Peter Simplicio added 20 and 14 respectively. Four Enfield players scored in double figures, led by Kyle Menaker with 18.

“I thought we played well for, like, 80 percent, 85 percent of the possessions,” said Conard head coach Jared Leghorn. “And there’s about 15 percent where we lost our mental focus and we took a bad shot or they get an open layup. Eight points, that’s three possessions. And that’s the difference between being a below average team and being a good team.”

Leading 35-33 at halftime, the Eagles put together runs in the second half that Conard couldn’t match.

Enfield used an 8-2 run to take a 43-35 lead early in the third. After four unanswered points from the Chieftains, the visitors went on a 10-6 run to close the quarter ahead 53-45.

The Eagles took a 61-48 lead three minutes into the fourth quarter with an 8-3 run. Simplicio converted a three-point play to make it a 63-57 deficit for Conard with 3:55 to play, but Enfield continued to score at will – in the paint and from the free throw line – to put the game away.

The Chieftains moved the ball effectively to get Shtefan and Olechna open shots from deep, but the Eagles’ balanced scoring ability allowed them to attack the paint with multiple players.

“I love the way we moved the ball,” said Leghorn. “I love the way we got open looks, and that leads to makes. Defensively, we gave up 77. That’s too many. Enfield plays at a pace where there’s gonna be more points, but 77 is too many. We can’t win games when we give up 77 points …”

Both teams traded buckets for much of the second quarter, as neither led by more than one possession. Enfield started the period on an 8-3 run to take a 22-19 lead, but Shtefan made a 3-pointer to tie the game at 22 with 5:10 remaining.

There were seven lead changes over the next three minutes before Enfield made a layup to take a 34-33 advantage. Menaker later made a free throw to give Enfield a two-point lead at the half.

With the loss, Conard suffers its fourth defeat in a row and falls to 2-9. Leghorn said the goal for his team is to continue improving while its young core sees more playing time.

“I thought we were better than our previous few games, but it’s gonna take some time as we grow and get more experience,” said Leghorn. “We’ve just gotta stay focused. It’s simple.”