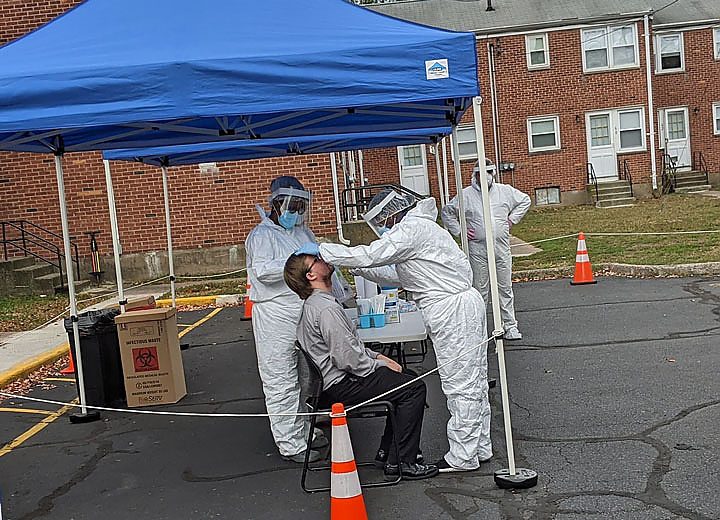 Dr. Ulysses Wu, chief epidemiologist at Hartford HealthCare, said Monday that it’s too soon to draw many conclusions about the omicron variant.

While the scientific community awaits data on the new omicron variant of the COVID virus, doctors and state officials cautioned this week against unnecessary panic and urged Connecticut residents to adhere to tried and tested mitigation strategies.

As of a Monday morning press call with Hartford HealthCare doctors, no cases had been recorded in Connecticut of the omicron variant, which was identified late last week in South Africa and is notable for its high number of mutations. Some countries have restricted travel as cases have cropped up in several corners of the world.

However, Dr. Ulysses Wu, Hartford HealthCare’s chief epidemiologist, said it was too soon to draw many conclusions about the new variant.

“The most important take home point is not to panic or to fear right now,” Wu said.

Initial cases of the variant have come with only mild symptoms, he said. Scientists have identified dozens of mutations, including as many as 30 on the protein spikes that affect transmissibility, but it may be weeks before experts know how the changes will impact the efficacy of vaccines and medications, he said.

In the meantime, Wu and others urged residents to safeguard against the omicron variant using the same precautions as they employed against other variants – in particular, vaccines and booster shots. Even if the vaccines currently available are eventually found to be less effective against the new variant, Wu said they still offer protections much the same way annual flu shots buff the body’s immune response to influenza regardless of its strain.

“The vaccines work, not only via production of antibodies, but stimulation of our B and T cells which are our second and third lines of defense,” Wu said. “It’s basically our linebackers and our safeties at this point. So if they get through the defensive line, we still have our linebackers, we still have our safeties that are still going to provide some sort of protection.”

In a statement Sunday, Gov. Ned Lamont said the state Public Health Department was coordinating with a network of labs conducting genomic sequencing on positive test samples and were monitoring for the appearance of the omicron strain. So far, none had been identified in Connecticut. Lamont urged residents to be vigilant.

“We have now entered the winter holiday season and still need to mask while in indoor public places, practice proper hand hygiene, get tested, and stay home if you feel sick. That cold may be more than just a cold,” Lamont said. “It is particularly important to take extra precautions when visiting with older or immune-compromised friends or family who are at higher risk from COVID.”

During a midday address Monday, President Joe Biden stressed the importance of getting booster shots of the COVID vaccine for people who were initially vaccinated more than six months ago. He called it the best protection against the omicron and other variants.

“This variant is a cause for concern, not a cause for panic,” Biden said. “We have the best vaccine in the world, the best medicines, the best scientists and we’re learning more every single day.”

The Centers for Disease Control and Prevention on Monday recommended that all adults ages 18 and older should get booster shots as soon as they are eligible – six months after completing an initial Pfizer-BioNTech or Moderna vaccination series, or two months after receiving a single Johnson & Johnson shot.

Wu said both the Pfizer and Moderna vaccines are based on technology that allows them to be quickly adapted to new variants. If it turned out that the vaccines are less effective against the omicron variant, he said the vaccines could be modified in a matter of weeks.

Asked if the omicron variant could be reliably identified by the currently available testing strategies, Hartford HealthCare experts said it was too early still to know for sure. However, Keith Grant, APRN and senior director of infection prevention, said scientists in South Africa generally used traditional testing methods when they initially identified the omicron variant.

“Based on the data and the technology they had, which is very similar to what we’re using right now, they were able to find out that something different was going on,” he said.