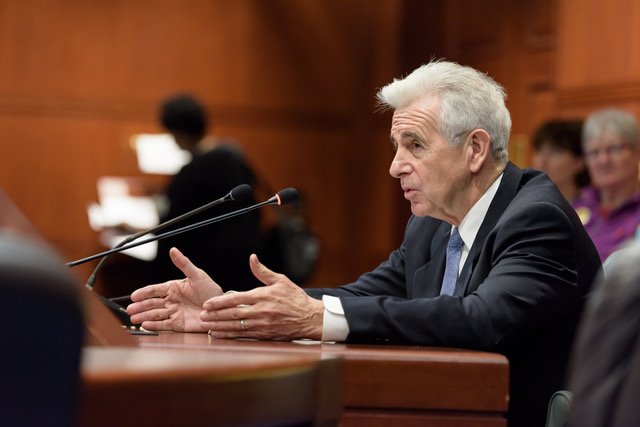 James Naughton testifying on the aid-in-dying bill. Courtesy of CTMirror.org

Actor and director James Naughton, who grew up in West Hartford and graduated from Conard High School, wrote the following Op-Ed for CT Viewpoints on CTMirror.org.

Pam Parsons and I grew up in West Hartford, met at 17, and got married after college. We had a great life for almost 50 years, raising a son and a daughter here in Connecticut, until an ultrasound confirmed there was a mass in her pancreas.

Pam endured surgery at Memorial Sloan Kettering – the Whipple procedure – one of the most complex according to the doctors, months of chemotherapy administered at a Connecticut hospital, and innumerable infections necessitating inevitable weekend hospital stays. Through it all, she smiled, determined to make the best of it.

After months of chemotherapy, the effectiveness began to wane. The cancer cells recovered and continued to grow and the doctor recommended changing the prescription to an alternative chemotherapy drug.

This scenario was replayed multiple times over the first two years of Pam’s voyage, until our oncologist finally told us that we had exhausted all of our chemotherapy options. But, he told us, he had found a new drug trial that Pam might qualify for in San Antonio, Texas. She was accepted into the trial and for the next eight months, we went to San Antonio every week. The new drug’s effectiveness looked promising, but then as before, the cancer cells began to rebound. The trial ended for us, and so did our weekly sojourn.

Back in Connecticut, she received chemotherapies that she’d had before in hopes of a different outcome. We continued our lives. Two grandchildren arrived and she was the ultimate baby whisperer, reader, and nurse. But her condition steadily deteriorated. Over a period of 12 weeks, she lost a lot of weight and became dependent on pain pumps, oxygen tanks and a drain to relieve a bile-duct blockage.

When she told me one morning, “I don’t want to wake up anymore,” I wasn’t ready. She had fought hard to beat her cancer and rejoin the life we had built. But she was dying of an debilitating and untreatable disease and she was ready to end the suffering that had become more than she could bear. Though I struggled at first, I understood what she needed – the ability to decide how she wanted to die.

Medical aid in dying would have given her peace of mind she so desperately craved in those last days. It is a well-established, palliative end-of-life care practice with clinical criteria and guidelines that meet the highest standard of care. But Connecticut does not allow aid-in-dying, and so although I desperately wanted to, I could not help her

This month, I joined my fellow Connecticut residents testifying in support of the state’s proposed medical aid-in-dying legislation now being considered by the General Assembly. The bill would allow terminally ill people with a prognosis of six months or less to live, the option to take medication to die peacefully in their sleep.

My message to the committee was simple. This issue is about giving people like Pam the ability to make decisions about how they will face the final days. Across the country, states are passing similar laws. Just this week, New Jersey became the latest. It’s time to pass aid-in-dying laws in Connecticut.

Six years ago, when my wife asked, I couldn’t help her. But I am advocating for her today. I ask the members of the Connecticut General Assembly to hear our stories and support aid-in-dying legislation.