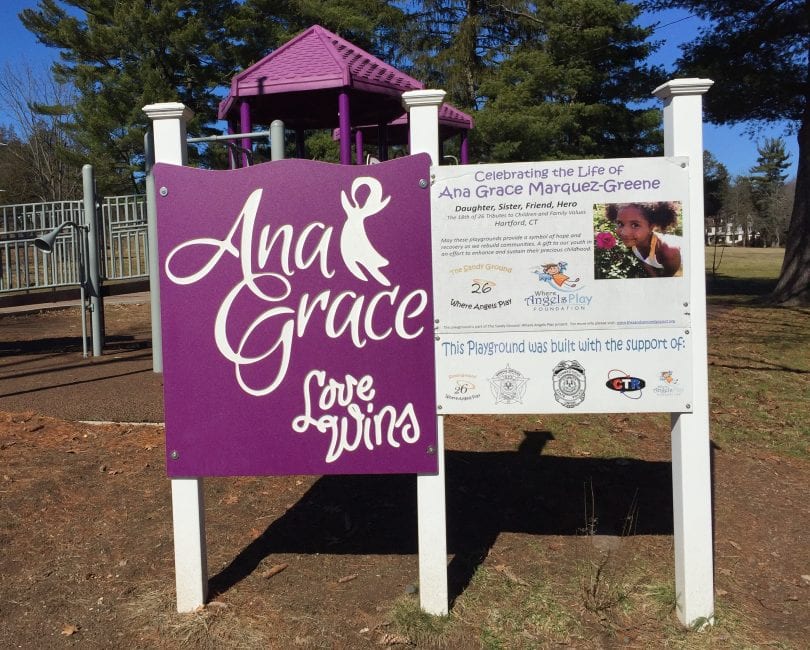 The Ana Grace playground in Elizabeth Park, where Hall High School senior said she had her first kiss, was built in memory of one of the victims of the Sandy Hook school shooting. Photo credit: Ronni Newton

My teacher is crying in the cafeteria. The teacher who is over six feet tall and wears stylish black heeled boots and winged eyeliner and leather jackets with extraneous zippers everyday. The teacher who prances exuberantly in front of the classroom waving Julius Caesar and riling up the students into caring deeply about a play written hundreds of years ago. The teacher who snaps her gum to get your attention and grades papers with emoticons. She is crying into her hand as the social studies teacher wards off concerned and interested students.

Rumors spread, of course. We guess everything we think a 20-something-year-old middle school teacher could have to cry about – her boyfriend broke up with her, her pet died, she found out she is pregnant, a family member is sick, a student told her she was a bad teacher. If we had made a list of a thousand items from most likely to least likely, we still never would have guessed the truth. Seventh grade was a time when we never would have guessed that only a couple miles away, a man had killed 20 little babies. Seventh grade was the last time when a school shooting seemed a remote possibility.

There was talk of going home early, although none of the students knew why. Outside, there was no sign of snow. In the end, we stayed for the entire day, although the teachers, still the only ones in the building who knew the truth, just drifted through the remaining hours. Every teacher set boring tasks to be completed in silence, much to the complaints of the students. I know now why the teachers couldn’t bear to stand in front of us and act as though it were any other day. They were busy watching the door, their eyes sometimes drifting to cabinets and closets. They were busy wondering if they could protect us. If their quick thinking and altruism could be enough to stop the bullets of an AR-15 assault rifle.

I only heard about it at 2:50 p.m. on the bus ride home that day. My best friend had received a text from her mom, but none of us had been allowed to check our phones during school. I remember that she had to explain it to me several times. I asked questions like, “How many did he kill?” and “But how did he kill them?” And she gave me answers like, “I don’t know, my mom says about 20 and a couple teachers” and “With a gun.”

But those weren’t the answers I was really looking for. I didn’t want a death count. I wanted an estimate of the number of years of life lost. I wanted a numerical answer to how many times over the next 40 years their parents would stare into the smiling eyes of their 5-year-old’s school photo and try to imagine them with acne or facial hair or wedding dresses. I wanted a hypothesis at the number of prescriptions filled out for PTSD from the other students. I didn’t want to know the weapon. I wanted to know how he had come across it. I wanted to know how their lockdown drill had failed as naively as a duck-and-cover method from the atomic bomb.

I acted cool, of course. I was 45 miles away from Sandy Hook Elementary School, I was seven years older than the students killed, and I went to a school with only around 500 students. These numbers were a thin barrier between me and something unthinkable. There was no real reason that I was alive and these 26 people were dead. I callously shrugged it off because I was in seventh grade and I was trying to stay calm for my friends and I didn’t want to go to school thinking about it every day. I don’t think, at that point in my life, I ever expected our lawmakers to take the same apathetic stance.

My mom hugged me that afternoon, even though I was in the stage of life when hugging me was like hugging an extremely embarrassed prickly pear cactus. “Every parent across America should be hugging their child and telling them that they love them today,” my mom said. I returned the sentiment without much thought. I didn’t think how much those parents would pay to hear their child say “I love you” one more time or how the phantom feel of their baby’s chubby arms around their necks would haunt them.

From that day on, lockdown drills were never as much fun. Now, there is no giggling. We scrunch ourselves into tighter balls and, just like my seventh grade teachers, plan our escape. My last one, I hid under a grand piano with five of my best friends and we all trembled as the assistant principal checked the door. A lockdown drill is not a safety precaution; it is a memorial service. As the lights dim to nothing and the shades are drawn, we are all dressed in black. The loudspeaker blares like the officiant at a funeral: We are now going into lockdown. We bow our heads and imagine, for half-an-hour, how it must have felt to be a 5-year-old staring down the barrel of a gun. They never tell us if it is a drill.

This is the best protection the United States government can offer us: a piano canvas and our backpacks clutched to our chests. In school, the only lesson you ever need to learn is how to get really good at hide-and-seek.

There is another one now. Another “anomaly.” According to some estimates, it’s around the 18th “anomaly” this year. I wonder how many “anomalies” it will take before they admit it is a pattern. I hear about the latest shooting on the radio while passing through the kitchen. Now, five years after Sandy Hook, I am not confused. My first thought when I hear the word “school” on the news is “another one.” I am not shocked. I am a girl raised in a country where school shootings are a part of life. I am a girl desensitized to the massacre of children 50 minutes from my house. I am a girl who had her first kiss on a playground built in memory of a murdered 5-year-old. I am a girl like every other child in Connecticut who was in school on Dec. 14, 2012; ever since that day, we have all wondered “Why wasn’t it enough?” I am just a tiny part of the state that had a school shooting back when school shootings were still news.

I am a girl who is going to be a teacher. Teachers don’t take an oath to protect and serve, yet they are the front lines in a battle that America is losing. There isn’t a single teacher – or student – in America who hasn’t wondered what they would do in a school shooting. I’d be willing to bet that most of the teachers, administrators, and security guards around the country have come to the same grim conclusion: that there is a unspoken clause in their job description.

Ellen Fuller is a senior at Hall High School and an aspiring writer.