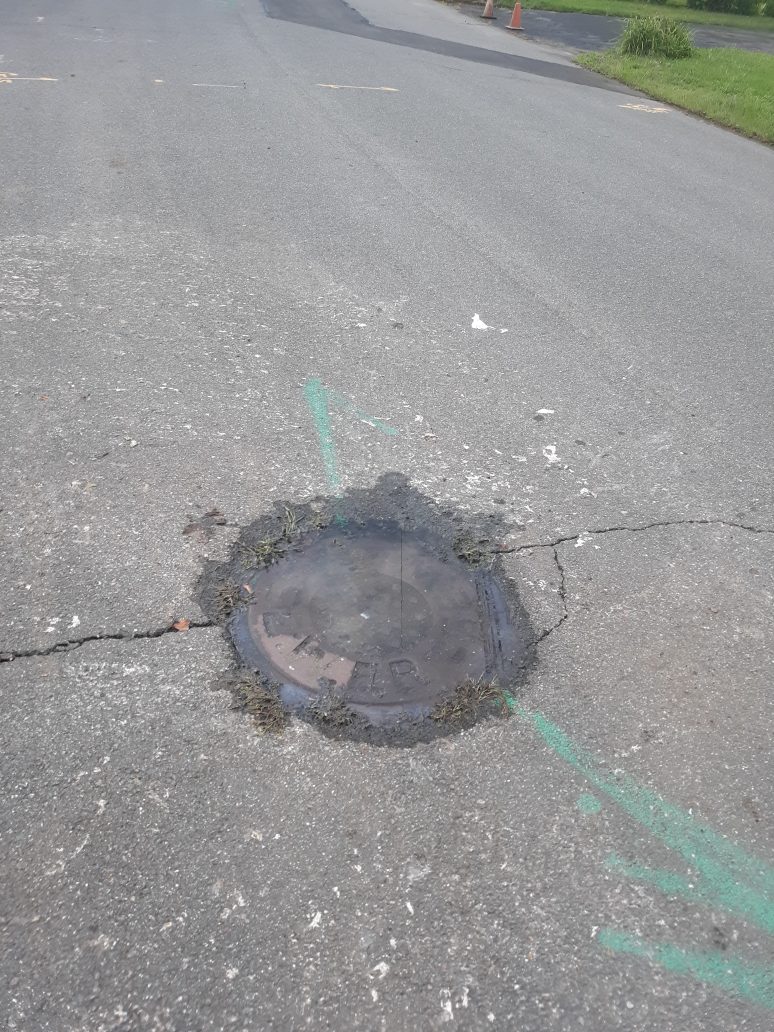 According to a resident of Fox Meadow Lane in West Hartford, sewage was gushing out of this manhole after the Sept. 1-2 torrential rain. Bits of dried toilet tissue remain visible the following day. Courtesy photo

Three recent storms have highlighted the need for West Hartford to move forward to comply with a mandate to remove storm water from the sanitary sewer system.

Now that the rainwater and illicit sewer discharges have receded, and we take stock of the damage caused by one 200-year and two 25-year storms within 14 days, we need to seriously look at the state of the storm sewer system and removal of storm water from the sanitary sewer system in West Hartford.

West Hartford is a Municipal Separated Storm Sewer System ( MS4) municipality which means that the rain water is not supposed to go, or more accurately is mandated not to go into the sanitary sewer. While West Hartford ordinances conform to  this mandate, in reality,  as many of us know, that is not the case. These last three storms highlighted the deficiencies in West Hartford’s efforts to implement the MS4 permit language and to keep up with the required mandate.

These three, supposedly infrequent, storms caused dozens of basements and manholes to surcharge and millions of gallons of sewage to flow into Trout Brook, Kane Brook, and the Park River as well as our streets, backyards, and basements. West Hartford residents need to become aware of this issue and need to understand that it is our collective responsibility as taxpayers to correct this problem. 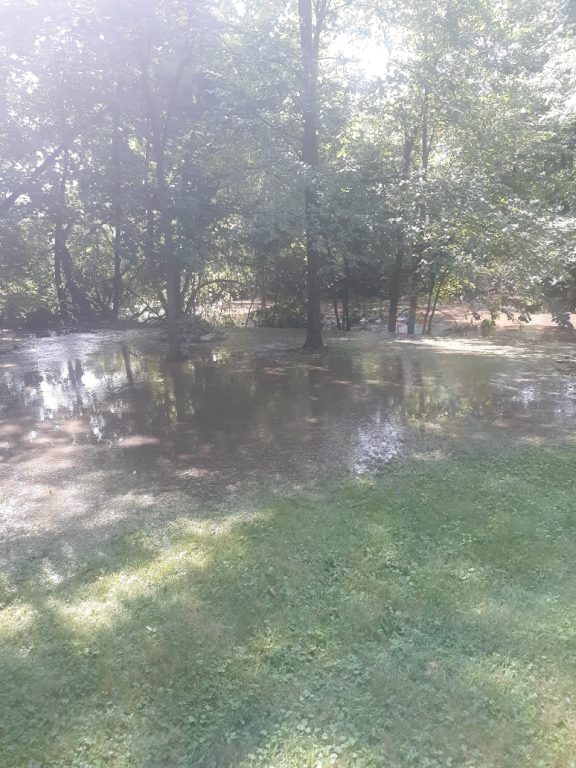 Flood waters on Fox Meadow Lane on Sept. 2 include sewage that gushed out of manholes. Courtesy photo

If this was something new that no one knew about it would be one thing, but it has been going on since 1957 when the first plan was submitted to the town to deal with the storm water problem. Unfortunately, for the last six decades, no Town Council has had the political will to deal with it. The proverbial can has been kicked down the road. Now, as we face imminent global climate change and the increasing threat of severe storms impacting our area more frequently, we must accept this becoming the norm and not the exception.

As the air becomes warmer and holds more moisture, rainstorms will become more frequent and more powerful as witnessed these last two weeks. It has become a clear reality and we need to focus our political will to deal with this problem now. We also need to understand that if we don’t take corrective action voluntarily, the EPA and DEEP will force our hand and mandate West Hartford do deal with removing private and public storm water from the Metropolitan District Commission (MDC) sewer system. This is not a pretty project with immediate visible benefit. This is not a project that will elevate West Hartford’s standing as “the best town to live” because the MS4 problem is not a metric that is measured for livability. It is not a problem that the current Town Council even seems to fully understand. It is an expensive and difficult problem and a problem that will increase taxes for all West Hartford property owners for decades. It impacts the health and safety of our town residents and quality of the water in our rivers, streams, streets and basements and the value of our homes and businesses.

As the residents of West Hartford face increasing costs with increasing budgets which increase our taxes, we will be forced to accept the reality of this problem sooner rather than later. The MDC, the non-profit company that provides our drinking water and manages our sanitary sewers, recently discovered 72 town-owned stormwater, street catch-basins connected  to the sanitary sewer in the Ringgold Street area. These are illegal connections per EPA/DEEP regulations under MS4, as well as being a separated sewer system community under the Clean Water Act. This additional water is a major contributor of approximately 9 million gallons of West Hartford’s rainwater that causes the sanitary sewer during a large rain event to overflow at Ringgold Street area manholes and Kane Brook in Hartford. Prior to identifying this information, MDC intended to spend $36 million to connect the existing overflow pipes in Kane Brook to a larger pipe in Hartford designed to carry the additional load.

But when they discovered that the water was entering their system illegally, they shifted the burden from the MDC budget directly to the town of West Hartford. This single project will cost West Hartford taxpayers somewhere between $27 and $67 million depending on the availability and capacity of existing storm infrastructure in city streets. Not only did the burden get shifted from MDC to West Hartford but it will now become a priority project superseding the priority of the FEAT (Farmington Avenue, Elizabeth Park, Asylum Avenue, Trout Brook) Drainage Study area which has been the major area of residential basement flooding for decades. West Hartford has spent close to $400,000 and three years on this study which is about to take a huge backseat to this new MDC priority issue.

West Hartford residents need to make choices this election cycle. We need people on the Town Council who understand this issue and who are willing to spend their political capital working with the MDC and the town to combine resources and address both entity’s goals simultaneously. If your basement floods, or your street floods, or your river or stream has a murky hue after a rainstorm you are impacted by this. If it doesn’t directly impact you than it will impact you indirectly in the form of higher taxes. It will impact you as more frequent 25-year storms hit our area. This is the future of our town. It is the dark underbelly that no one is looking at. It is the invisible, dirty, complicated, expensive problem that you have never heard about. Until now.

Editor’s Note: Rick Bush is one of five West Hartford residents serving on the Metropolitan District Commission’s Board of Commissioners. He is also a candidate for Town Council as a member of A Connecticut Party.