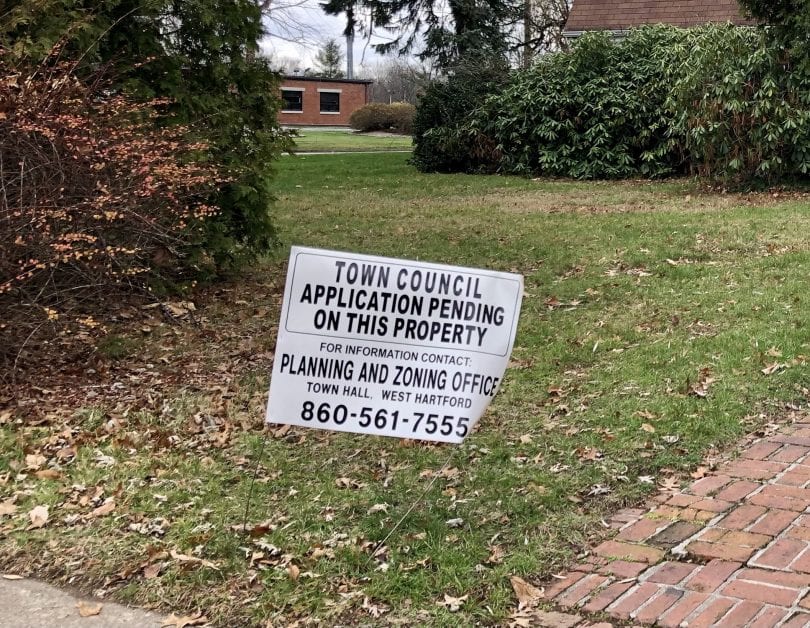 A sign in front of a property at the corner of New Britain Avenue and Berkshire Road in West Hartford indicating a public hearing for a zoning change. The Town Council voted to rezone the property to multifamily in December 2020. Photo credit: Ronni Newton

This week the state Republican Party sent out an alarming email to everyone on its list, warning them that now was the time to “put a stop to the beginning of the end of local zoning!” Senate Republicans sent out a similar email, asking people to submit testimony to Monday’s hearing to say, “NO to state-mandated zoning and yes to maintaining local control & protecting the environment.” That sounds just like that pushy liberal government up in Hartford! How dare they think they know better than the people who actually live in a town?

Wait, hang on, put the pitchforks down. I know that local control is something we prize as flinty, argumentative, and fiercely independent Yankees! But I hate to say it, there are times when local control hasn’t served us as a whole people well. Zoning is one of those times.

I’ve written before about zoning reform and exclusionary zoning, but in case you missed those, here’s the upshot: wealthy towns with overwhelmingly white populations tend to write zoning regulations that make housing lot sizes and minimum square footage requirements so large, and therefore expensive, that they effectively zone out poverty. This is no accident: West Hartford, one of the first towns to enact zoning regulations in 1924, purposely used them to keep out the poor. And because this is America, there’s a strong racial element to all this. The redlining of the 1930s and ‘40s, which kept people in “undesirable” neighborhoods from securing home loans, transformed into the exclusionary zoning of today.

That’s why our cities have such high concentrations of poverty and all the problems that come with it: people below a certain income level can’t find anywhere else to live. The solution is to make more affordable housing available in the rest of the state, and that’s the goal of some of the bills the legislature is considering.

Basically, the state would require towns with more than 7,500 people allow multifamily homes or “middle housing,” which means duplexes, triplexes, quadplexes, cottage clusters, and townhouses, to be built along major commercial corridors. The bill would also require towns to allow mixed-use developments near transit stations such as train stations and bus terminals, and create zones where accessory apartments are allowed without a hearing.

Let’s be really clear: these are good ideas. Because the increase in denser development would be limited to commercial corridors and the area near transit stations, it wouldn’t result in more sprawl. The bill isn’t talking about sticking a whole bunch of triplexes in rural Chaplin, either; this is aimed at towns that already have a significant population.

In short, this bill is for all those populous and highly desirable suburbs cosplaying as quaint country towns. You know who you are.

The state has tried cracking open the hard shells of these towns before. Affordable housing requirements are nothing new: the controversial 8-30g requirement, passed in 1990, mandated that at least 10% of a town’s housing stock be affordable. This law has helped build thousands of new units of housing, but it’s also easy for towns to wiggle out of if they want to. Some towns (yes, I see you, Darien) have done a lot of work to build affordable housing, but too many have not.

That’s why local control doesn’t always work. Connecticut’s system of independent towns means that each community primarily looks out for itself and its own interests. If that interest is to keep all the wealthy, white people who run the place happy, then that’s what policy is going to look like unless the state forces them to do otherwise.

I know that towns have concerns about increased traffic, higher demands on water and sewer systems and overcrowding in schools. Many of the towns that might be affected, however, have been able to keep their mill rates low by zoning out people who might actually need more municipal services. Plus, didn’t Joe Biden just send your town a big whack of money? I bet you can find a good use for it.

And then there’s the argument about the “character” of a town. I challenge people to think about what they really mean by that. It’s not like developers are going to pave over historic districts. And why would more affordable housing be so bad for the character of a town? Is it the housing that’s the problem, or the people who would come along with it?

Local control serves us well a lot of the time. But when local control has done little to combat Connecticut’s legacy of segregation, the state needs to step in.

But, you protest, wouldn’t this dumb idea of yours mean that we ought to go after local control of education next?

Click here to indicate your support or opposition to SB 1024 via CTNewsJunkie.com.

Susan Bigelow is an award-winning columnist and the founder of CTLocalPolitics. She lives in Enfield with her wife and their cats.