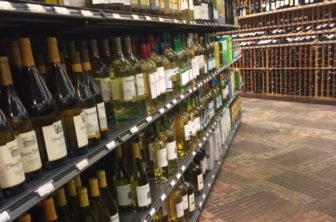 Will there be a recycling fee? The package store association suggested a 10-cent fee as an alternative to Gov. Ned Lamont’s call for new deposits on liquor bottles. Courtesy CTMirror.org

The Connecticut Package Stores Association has pitched an alternative to the deposit plan that the governor recommended in his budget presentation.

The Connecticut Package Stores Association also is asking Lamont and the legislature’s Environment Committee to consider a 10-cent fee on 50 milliliter “nip” bottles, though consumers could return that to reclaim a nickel deposit.

The association argued against expanding the state’s bottle recycling program to include large and medium-sized liquor bottles as Lamont suggested in his Feb. 20 budget proposal.

These bottles “are already recycled and recovered by homeowners using existing collection programs through private haulers, municipalities, or taken to transfer stations by homeowners,” Carroll Hughes, the association’s executive director, wrote in a memo sent Friday to the Lamont administration and to the Environment Committee.

The Lamont administration estimated that a 25-cent deposit on full-sized liquor bottles effective Oct. 1 would raise $4.4 million for the state next fiscal year and $6 million in 2020-21. The state would keep the unclaimed deposits.

The association did not offer a specific revenue projection from its counter-proposals, but wrote in its memo that they would generate “millions of dollars beyond the revenue set by the governor.”

The legislature and governor could then dedicate these funds, the association added, to support recycling or any other environmental protection programs.

The Lamont administration neither endorsed nor dismissed the alternative Friday.

Chris McClure, spokesman for the governor’s budget office, said, “Governor Lamont has been clear since taking office, he is willing to have substantive and meaningful discussions with anyone who brings forth a good idea. We will review this proposal and engage with CPSA to determine if it offers a viable path forward from an environmental and revenue perspective.”

Leaders of the legislature’s Environment Committee could not be reached for comment Friday.

The administration also says that expanding the state’s deposit program to include liquor bottles would have a significant, positive impact on the environment.

The introduction to the governor’s budget proposal states that broken glass from liquor and other bottles collected from households through residential recycling programs “contaminates the state’s recycling waste stream and very little broken glass actually gets recycled.

By comparison, “nearly 80 percent of glass is recycled through the current bottle deposit program,” which already covers beer and soda bottles.

But Hughes challenged this assertion.

“If those who suggest that bottles collected under a bottle bill would be unbroken or of better quality, they may be correct,” he wrote. “This issue is not a fault of the homeowner who recycles their bottles, but rather it is a flaw in the collection process. This should be corrected where the problem exists, not by adding a new process for collection.”